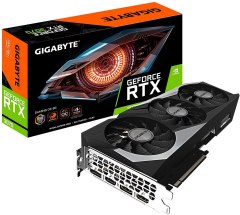 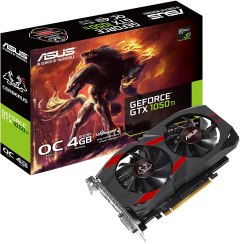 If you enjoy fast-paced online games like Overwatch, this inexpensive graphics card is a top option for your gaming PC.

This is easy to install. Optimized for competitive online gaming. A relatively affordable graphics card. Built with rugged design and runs cool. It's dust-resistant and has a quiet performance.

Not ideal for 4K gaming. 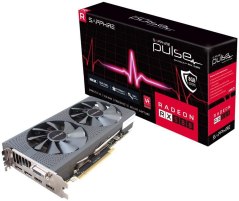 If you're looking for a long-lasting graphics card to play modern games at their 1080p best, this is a worthy investment.

Its fans may get noisy while gaming. 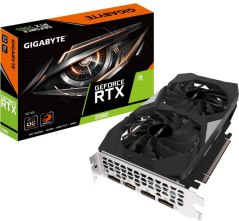 PC gamers looking for impressive visuals for their new games and VR experiences will appreciate this graphics card.

This card runs especially cool and is optimized for overclocking. Has a rugged design and a comprehensive companion app. Best for detailed environments and realistic lighting effects. It's easy to install. 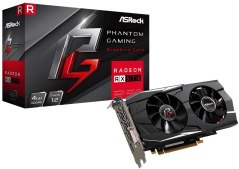 Budget-conscious gamers will appreciate the reliably smooth 1080p performance and silent fans of this inexpensive option.

Solid, but not the most advanced graphics card available.

In the world of PC gaming, there’s one computer spec that matters more than all the others: the graphics card.

Your computer’s graphics card, often referred to as a video card, handles everything you see on your screen. It’s responsible for rendering everything from streaming video to video games to your desktop. If you’re a gamer, that means that you need a graphics card that can keep up with the visual demands of your games, especially if you’re into 4K gaming or virtual reality.

The graphics card market is full of models ranging from adequate to incredible, so you’ll have a lot of options as you shop. But that’s what we’re here for – to help you decipher all of the tech specs and pick out the perfect graphics card for your perfect gaming experience. We’ve also included some of our favorites that we think stand out from the rest. So let’s dig in! 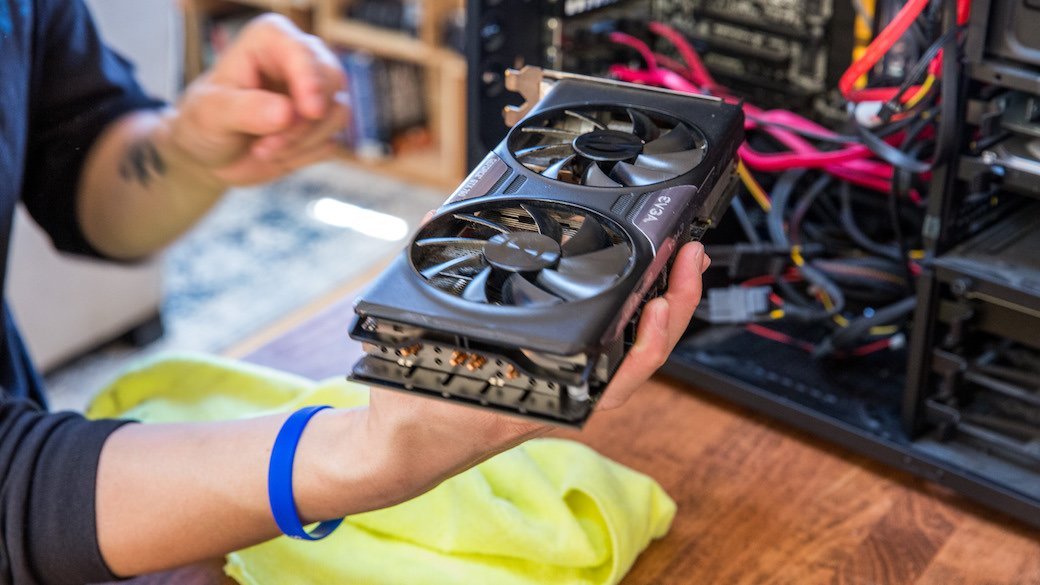 If you have a laptop, consider buying an external video card. These come in their own enclosures and connect via USB. They’re usually a lot more expensive than their internal counterparts, but they’re portable and useful for machines that are otherwise difficult to upgrade.

Before you start comparing video cards, answer these questions. You’ll be able to eliminate a lot of options this way and find the right card more quickly.

Video cards are fairly bulky, and the more powerful models are larger than the basic ones, so if you want a high-end video card, you’ll need plenty of space inside your computer’s case. Peek inside your PC to get a sense of how much room you have, and if things look cramped, get a tape measure to determine exactly what size card you can accommodate, then make sure the card you buy fits the space.

What type of games do you play?

High-end graphics cards are made for graphics-intensive games, typically first-person shooters like Overwatch or Counter-Strike, but if you’re more into platformers, puzzles, or retro games, you don’t need as much power. Our general rule of thumb is if you play a lot of games that offer 3D perspectives, you’ll need a better-than-average video card, and you should plan on spending at least $150. If you play 2D games or games that don’t have a lot of motion, you’ll be fine with an entry-level graphics card.

How many monitors do you use at once?

All video cards include multiple outputs, so it’s typically easy to add a second monitor to your gaming setup. However, it takes a lot of GPU effort to support multiple monitors when gaming, so it’s common to find video cards that perform at a faster frame rate or higher resolution when connected to a single monitor (cards like this can support multiple monitors but do so at lower frame rates or resolutions). The bottom line: if you have multiple monitors and you play 2D games, almost any video card will do. If you want to play graphics-intensive games (or even massive multiplayer games like World of Warcraft) at their highest settings on two monitors, you’ll need at least one high-end video card or possibly two (more on multi-card setups in a moment).

Video card manufacturers often try and distinguish themselves by adding unique features or funky cosmetics, but when it comes down to it, there are three features that are critical to your purchase decision: GPU, dual-card support, and VR support.

The heart of every video card is its graphics processing unit (GPU). The GPU is responsible for doing the work of how video is handled, from the resolution to the frame rate and everything in between. There are two major GPU manufacturers – AMD and NVIDIA – and while both companies manufacture their own cards, in most cases they license out their GPUs to other manufacturers.

While you’re shopping, you’ll likely bump into AMD’s Radeon line of GPUs as well as NVIDIA’s GeForce brand, and what matters most is the actual GPU from that brand. For example, the NVIDIA GeForce 1080 Ti is their most popular GPU, and you’ll find GeForce 1080 Ti cards made by a variety of manufacturers. Similarly, you’ll see cards from different manufacturers based on the Radeon brand. In general, the higher the number, the more powerful the GPU. If you’re not sure which to get, search gaming user forums to see what other gamers are using with your favorite games.

A new video card can be a literal game changer, but there’s definitely something better than just one: using two at the same time. Many video cards are compatible with dual-card setups so long as you use two identical cards. Using two video cards is useful for multi-monitor setups and running games at their highest settings.

The new frontier in gaming is virtual reality – games that use goggles to place you in a three-dimensional world to explore. To get into virtual reality, you’ll need a VR headset and a compatible video card, so if you’re interested, make sure the graphics card you buy is VR compatible.

Inexpensive: Graphics cards for casual gaming cost between $50 and $150. Cards in this price range offer solid support for standard HD games (1080p) and multiple monitors. If you’re running a single-monitor setup and you haven’t yet made the leap to 4K, you don’t need to spend more than this.

Mid-range: If you’re interested in 4K gaming or running multiple graphics cards in parallel, you’ll need to spend between $150 and $250. Video cards in this price range will satisfy the majority of gamers – they’re powerful and reasonably ready for the demands of future games, and they include software that allows you to fine-tune the card’s settings.

Expensive: If you need absolutely the most powerful graphics card available, plan on spending between $250 and $500. Video card standards evolve quickly, so the most expensive models on the market usually only stay that way for 12 to 18 months, but if you like gaming on the bleeding edge, it’s the only way to go.

We love the Zotac GeForce GTX 1660 Graphics Card because it offers high-end performance in a svelte form factor. Its ultra-compact design means it can fit in any computer case, and it’ll leave plenty of room for airflow, too. It’s powerful enough for both 4K and VR gaming, and it’s dual-slot ready, so you can buy two and get twice the rendering power. If you want to get into high-end gaming but don’t want to pay a high-end price, this is the graphics card to buy. If you need an even smaller video card, Zotac also makes the GeForce GT 710, a card based on NVIDIA’s GT 710 chipset. It’s a low-profile video card, so it can fit in PCs with a slim form factor. It’s even got an old-school VGA output, so you can use it to game with older monitors. If you need the most affordable video card around for your 1080p games, this is one of your best options. 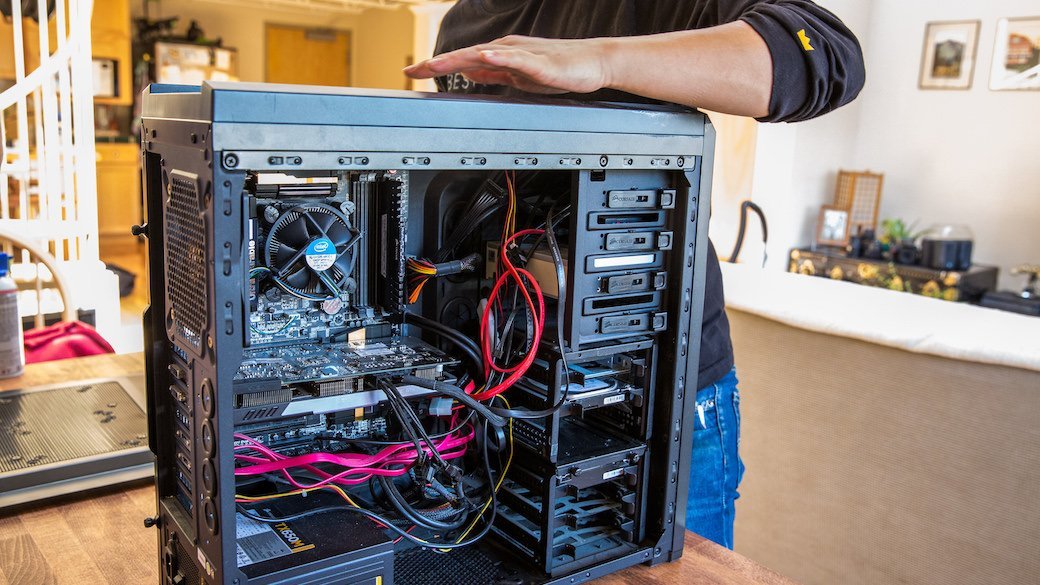 Before you buy a new graphics card, buy some plastic zip ties for cable management. By tying your cables together (and keeping them out of the way of the case’s airflow), you can keep your internal components nice and cool – and stable.

Q. Is it hard to install a graphics card?
A. No, so long as you follow a few safety precautions. Installing a video card usually just means opening up your PC case, removing the current video card from its slot, and sliding the new one in (usually there’s also a single screw that holds it in place). Before you do, however, it’s important to unplug your computer – touching your computer’s internals while it’s on can result in serious injury. Once you’ve purchased a graphics card, search the web for installation videos so you can see how other gamers went about setting up theirs.

Q. If I buy a graphics card with multiple video outputs, can I use them all at once?
A. Yes. All video cards are built to push video from all of their ports, so you can connect multiple displays. Just keep in mind that with each additional monitor you connect, you’re asking your graphics card to do more work, so it will generate more heat. In some cases, connecting multiple monitors is possible, but the video card will need to run at reduced settings when connected to more than one display.

Q. Some graphics cards are built with one fan and others are built with two. Which is better?
A. It depends on your computer case and how everything is laid out. Ideally, your video card’s fans should push air in the direction of your computer’s exhaust fans to keep the card from running hot and malfunctioning. In some cases, a graphics card with a single fan will be better for airflow, while in others, a two-fan card can be more effective. In general, the number of fans on your video card isn’t as important as picking one that can push heat in the right direction. 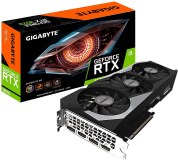 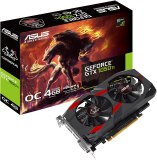 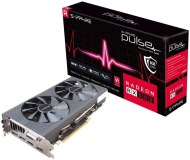 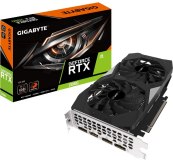 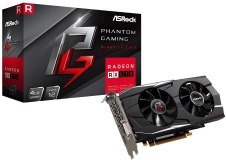 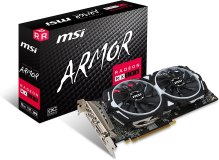 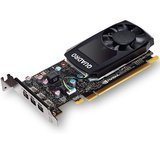 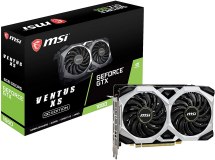