The iPhone 12 Pro is packed with premium features and is lauded for its durability, making it the best long-term investment available.

Does not include a power adapter. 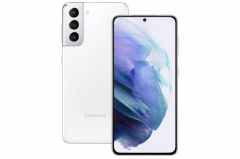 Between its impressive camera and versatility, the Samsung Galaxy S21 is ideal for digital videographers and photographers.

Does not support microSD cards.

The 5G phone to chose for anyone who prefers a trim, pocket-friendly device. Otherwise, check out its competitors on our shortlist.

At 5.4 inches in size, this model is the smallest 5G phone available. Lightweight yet durable. Processor is just as capable as that of the full-sized option. Superior camera and awe-inspiring OLED display. Decent price point.

Not likely to appeal to those who prefer larger screens. 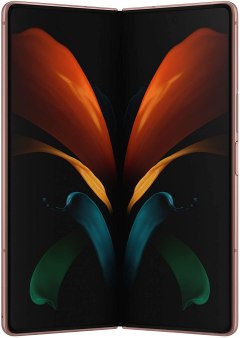 This phone operates similarly to a tablet, making it perfect for tasks that need a larger screen. 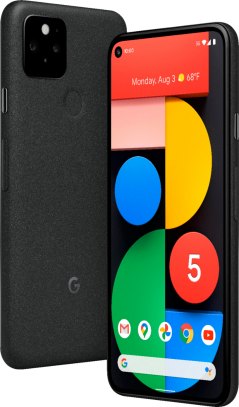 The fairly priced Pixel 5 is a top choice for anyone who needs a particularly sturdy, reliable, and fast 5G phone.

Takes a while to fully charge.

If you pay attention to cellular technology and smartphones, you have undoubtedly heard the term “5G.” With 5G networks expanding their reach in the U.S. every day and 5G phones gaining popularity, this term will continue to dominate smartphone discussions.

At its essence, 5G is a cellular networking standard in its fifth generation. 5G speeds are far greater than the 4G/LTE speeds you probably experience on your current smartphone or tablet connected to a cellular network. Eventually, 5G speeds could top out at 10 gigabits per second, even outperforming some of the best current wired fiber internet connection options.

To receive the biggest 5G benefit out of your smartphone, you need a 5G phone. In this guide, we help you figure out the key aspects of 5G phones, offering tips and providing answers to frequently asked questions. To make your shopping experience even easier, we point out some of our favorite 5G phones for your consideration. 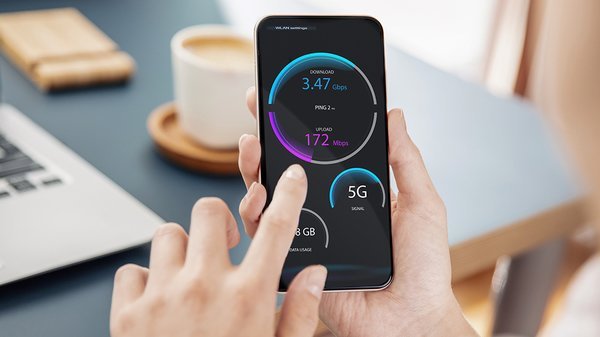 5G technology offers such strong transmission speeds and performance that it’s expected to be the highest standard in the industry until about 2030 (when 6G may start to appear).

Finding the right 5G phone is easier when you understand how 5G works. A 5G phone has hardware and software built into it that allow it to connect to a 5G network. All of the major cellular networking providers, including Verizon, AT&T, and T-Mobile/Sprint, have 5G capability now in certain locations, and they continually expand the reach of their 5G networks.

When considering 5G phones, you first must determine whether you want an Android or Apple phone.

Android phones are those that run the Android operating system. They are available from a number of manufacturers, with Samsung, Google, and LG among the most popular.

Samsung: Samsung began offering 5G phones in mid-2019, and it continues to build on its 5G family with several releases in 2020.

LG: LG released its first 5G-enabled smartphone in mid-2019, and it has added several more since then to its lineup.

Motorola: Motorola claimed to be offering a 5G phone late in 2018 through an add-on element to existing phones, but it didn’t quite offer the speeds expected. Motorola now has true 5G phones in the U.S. and Europe, having joined the market in late 2020.

Several other companies manufacture 5G Android phones, such as Huawei and ZTE, but the majority of their phones have limited or no availability in the U.S.

Apple phones run the iOS operating system, which Apple owns and develops. Apple does not license its iOS to other manufacturers, so only Apple has iOS phones.

Apple released the iPhone 12 family of phones late in 2020, which represented its first 5G-capable phones. 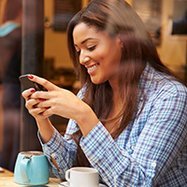 Did You Know?
With 5G transmission speeds, extra services will be available, such as high-speed internet and pay TV services over the cellular network.
Staff
BestReviews

Manufacturers like Qualcomm, Samsung, and MediaTek are among those that create 5G modems for various phone brands. After purchasing Intel’s 5G modem business in late 2019, Apple also makes 5G modems.

A 5G modem allows a 5G phone to access the spectrums of the cellular network set aside for 5G transmission.

5G smartphones have a wide range of screen sizes, but larger screens are more common with 5G phones than older 4G phones. Manufacturers expect consumers to be watching quite a bit of video on their 5G smartphones due to the outstanding data transmission speeds, so they anticipate consumers will want larger screens. Many phones have screen sizes as large as 6.7 inches (measured from one corner to the opposite corner). The Samsung Galaxy S20 Ultra goes even bigger, featuring a 6.9-inch screen.

The Samsung Galaxy Z Fold2 even has a dual-screen design, giving you almost twice the screen size of a small smartphone and making it closer to a tablet. It folds in half so you can carry it easily when you aren’t using it.

Following through on the expectation of people consuming a lot of video on their 5G phones, screen resolution is incredibly sharp on the majority of these phones.

Resolution is typically at least full-HD quality, with a few models offering 4K resolution. The majority of 5G phones have a resolution somewhere between full HD and 4K.

Because 5G phones are so advanced, it’s not surprising that they have outstanding cameras.

5G phones often have more than one rear-facing camera lens, which gives photographers the option of shooting wide-angle or telephoto shots, depending on the lens in use. Some have up to three lenses on the rear.

When purchasing a 5G phone, you nearly always have the ability to select among a few different storage capacities. You can save a bit of money by selecting less storage, such as 64GB or 128GB. For an extra cost, some 5G phones have 256GB or 512GB of storage.

Any 5G phone should deliver outstanding battery life when new, typically from 10 to 12 consecutive hours with normal use. As with any smartphone, as the 5G phone battery ages, it will slowly begin to lose its ability to hold a full charge, so your battery life will diminish over time.

Unless a smartphone indicates in its specifications and marketing materials that it can support 5G speeds, it will not be 5G capable.

Cell phone lanyard: Gear Beast Universal
A lanyard wrapped around your 5G smartphone will keep it close at hand, greatly reducing your chance of dropping or losing this expensive piece of gear. The Gear Beast lanyard fits nearly any phone size and is made of quality materials.

Cell phone rings: Humixx Finger Ring Stand
Another way to keep a tight grip on your 5G phone is with a phone ring. The Humixx ring has excellent build quality. The ring swivels against the adhesive backing, allowing you to easily adjust the angle of the phone.

Because a 5G phone is a newer phone, you can expect to pay a premium. Newly released smartphones almost always have a higher price than they do 12 to 24 months after their initial release.

Depending on the cellular network provider you select and the deal you receive, your price could vary a bit from the numbers listed here. Our numbers represent retail prices and do not take into account one-time deals.

Low: 5G smartphones with smaller-than-average screens and minimal storage cost in the $400 to $600 range. Buyers must understand that manufacturers are releasing their high-end 5G phone models first to capitalize on the excitement of the introduction of 5G.

Average: An average 5G phone may have a screen that measures 6 inches or larger and costs $600 to $800. These phones will serve many people successfully, but they will lag just behind the top-end phones in terms of screen resolution, storage capacity, and performance speed.

High: The priciest 5G phones run from $800 to $1,200. These phones have the largest screens with the sharpest display resolutions. They are top-end models in terms of performance speed, too. 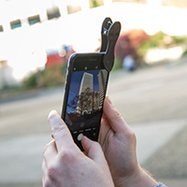 Did You Know?
A 5G phone will seamlessly use other transmission speeds, such as 4G or 3G, when you’re in a spot where a 5G network is not available.
Staff
BestReviews 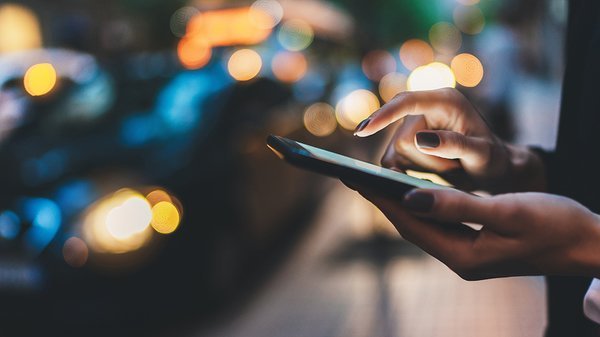 A. This may seem like an odd question, but there have been some conspiracy theories on social media blaming the introduction of 5G networks for the spread of Covid-19 or increased exposure to radiation for the phone user. None of these theories have hard facts behind them.

Q. Do I have to purchase a new phone to take advantage of 5G networks?

A. Unless you have already purchased a 5G-enabled phone, you will have to purchase a new phone that is 5G-enabled to use the 5G network. However, even if you decide to stick with a 4G phone, you may notice some minor performance improvements going forward. As some users migrate from 4G to 5G, it is likely the traffic on the 4G-only spectrum will become slightly less congested, allowing 4G phones to work faster.

A. Not necessarily, but it will depend on your cellular carrier and the type of plan you have now. Some carriers grant 5G access with your new 5G phone on your current plan. Others require you to upgrade to a new plan along with the new 5G phone. Ask about this before purchasing your new phone so you know what extra costs you may encounter. 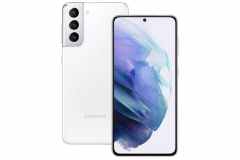