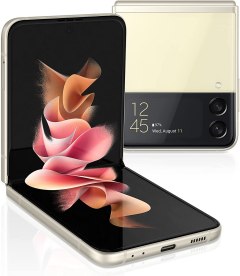 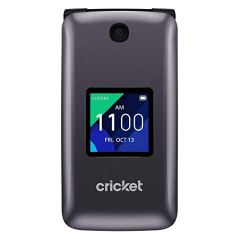 A great flip phone that offers multiple features that sets it apart from the crowd.

Has a solid battery that will last up to 16 days when not in use. Phone calls reduce background noise, allowing you to come through crystal clear. Buttons are big and easy to press. Fast connection speeds.

The vibration can be a little hard to feel. 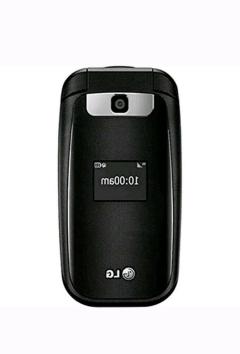 If you're looking for a simple option for business, the LG B470 is well worth your consideration.

Limited to the AT&T network. 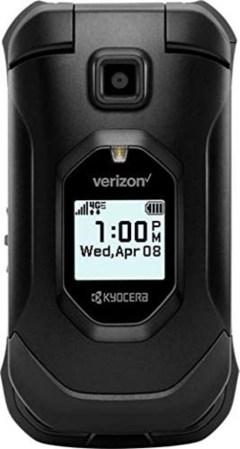 A solid phone that is built around being able to stand up to extreme conditions.

Can stand up to extreme shock, weather, and dusty conditions. Easy to program all the buttons to access the most-used apps. Speakers are loud enough to hear in loud areas. The battery is easy to remove and replace if needed.

The battery doesn't last long even in standby mode. 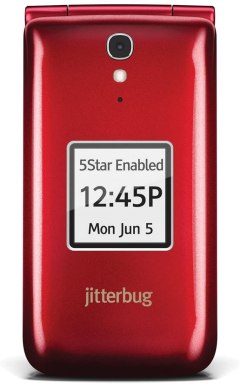 A good choice if simplicity is your top priority in a cell phone and you don't mind its price and limitations.

Large buttons and screen are straightforward and easy to see. Overall easy to use; a popular pick among seniors who want a basic phone.

It's pricey and it works a bit slowly. GreatCall network is limited. Not as durable as you might expect for the price. Some issues reported with activation.

In today’s fast-paced, high-tech world, people are overwhelmed. In order to protect themselves from overstimulation, social media fatigue, and eventual burnout, some people are making the choice to simplify, scaling back and unplugging in ways that make sense and don't affect their quality of life. One way to do this is to switch to a flip phone.

But how do you choose a flip phone? Do companies even still make them? What features can you get? How much do they cost? How good is the sound quality? Is the network reliable?

We at BestReviews have put together this shopping guide to address your concerns, answer your questions, and make you smart about flip phones. It will help define your options so you can pinpoint the exact flip phone you want and get it at a price that fits your budget. 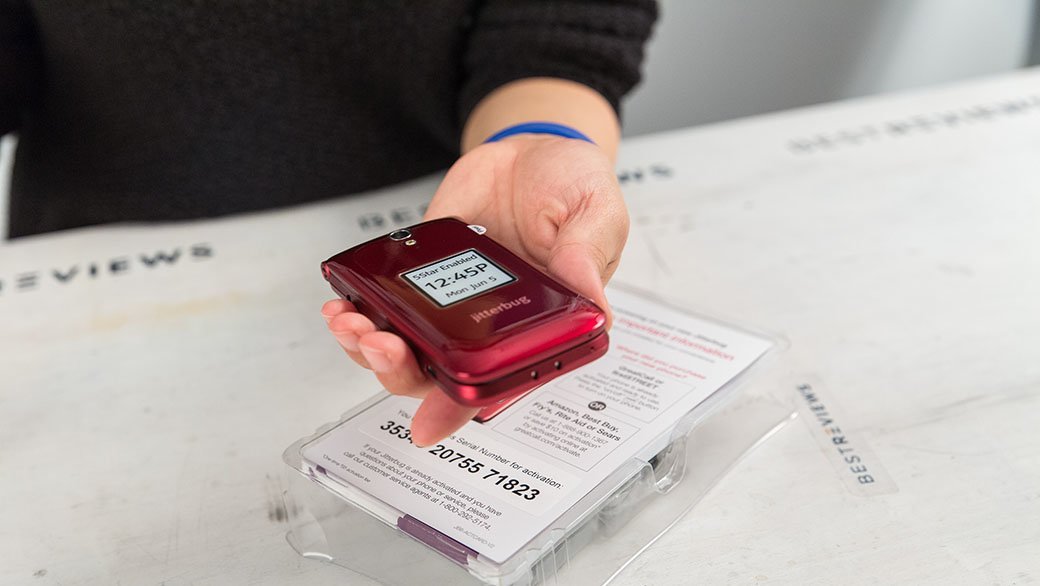 Smartphones are personal computers. Most of them run the same apps and let you do the same things you can do on a desktop computer. These devices have become fully portable offices complete with virtual assistants and the ability to access all your files and documents from wherever you happen to be at the moment.

However, the interface is a little bit more troublesome. The tiny screen can make your eyes sore and your neck stiff. A smartphone does many of the things that other, larger devices do better. It isn’t a necessity; it's an option.

For those who have never seen or owned one before, a flip phone is a rectangular mobile phone that folds in half on a hinge. When you want to use the phone, you flip up the lid to expose two surfaces: the main screen at the top and a control pad below. Opening the phone also doubles its length, making it more the size of a landline phone.

Main screen: The main screen is where you see what's going on. It’s pretty much like the screen on your smartphone. Some flip phones even feature touchscreens for an added way to interact.

Control pad: Most of the control pad is a dial pad containing the numbers 0 through 9, a star key, a pound (or hashtag) key, and a few more navigation keys, including Enter, Call, and End Call. Flip phones are designed to be used with one hand, using the thumb for all the navigation. Typing is done with a predictive text technology called T9 that enables you to type with just the number keys.

It’s smarter than you think. A modern flip phone isn’t an antiquated novelty that you place on the coffee table to be ironically trendy. It’s a fully functioning mobile phone that uses the same networks as pricier smartphones. Often flip phones are praised for their clear sound and large keypad. Beyond that, these devices also have an operating system that enables the user to do more than make calls.

If you want to live a little more in the real world and still be able to chat and text, ditching the smartphone for a flip phone might be the perfect option for you. And even if you're not ready to make the break, a low-cost, backup calling device could still be a good idea. 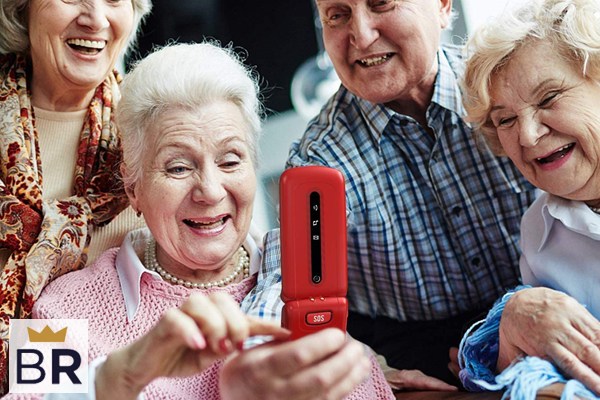 We look carefully for the best flip phones that would appeal to a variety of users, including folks who don’t want fancy smartphones and anybody else who just wants to disconnect from the cloud a little. 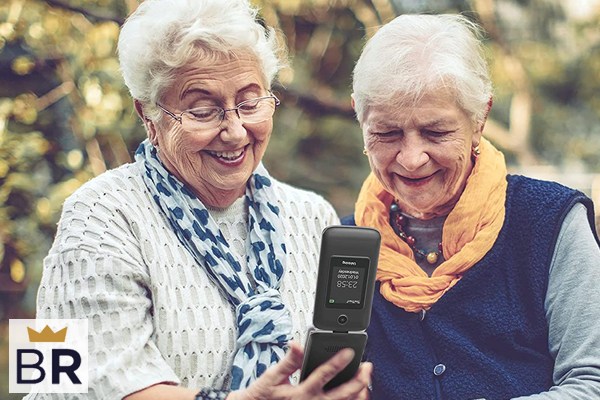 We closely review a wide range of flip phones to find the ones that are the easiest to use and the most resistant to drops and other breakage. 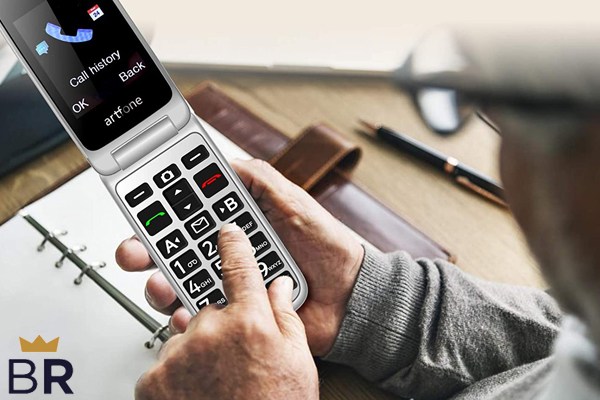 When researching the best flip phones, we note which networks and network types each one works with, so you always have service when and where you need it.

We give extra points to flip phones with high-contrast and high-resolution screens that are easy to read. 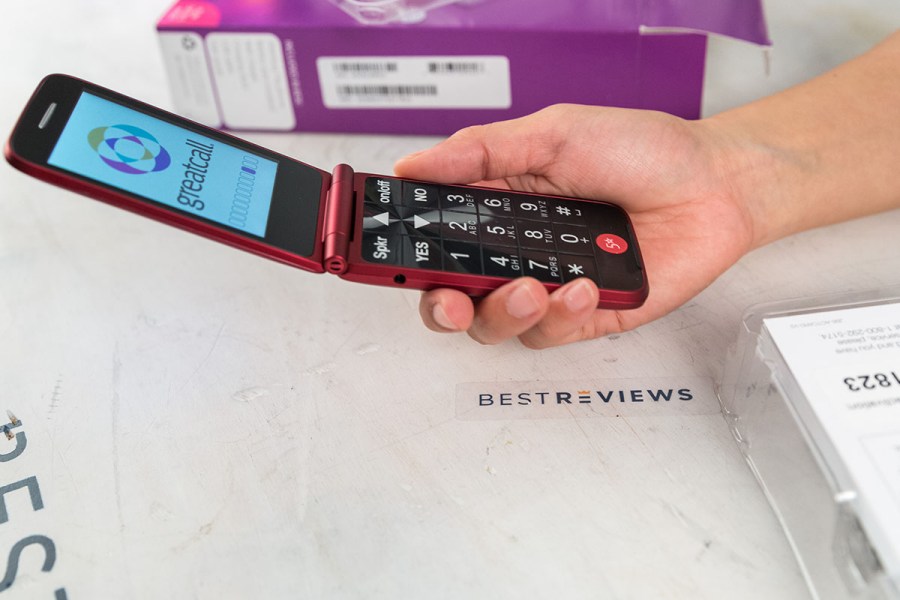 Looking into the best flip phones includes an assessment of the volume controls and other simple yet effective functions they offer. 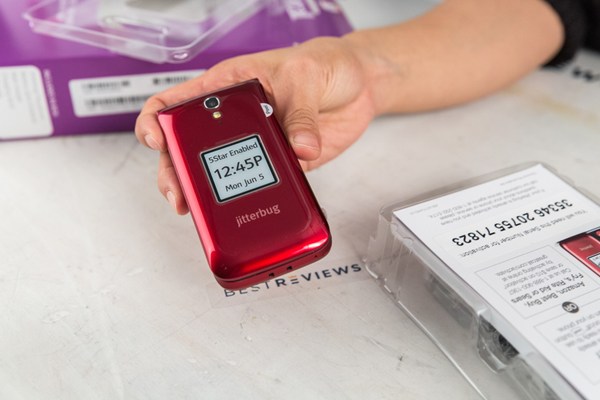 Battery life is something we pay close attention to when recommending the best flip phones because a phone is only helpful when it’s ready for use. 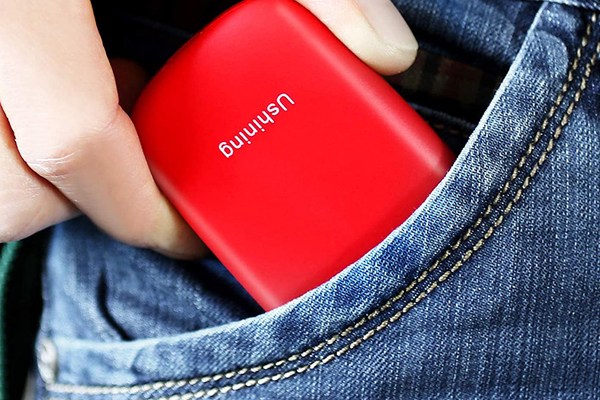 Most 3G networks that are still around are set to be discontinued in the near future. As such, we research and recommend flip phones that offer 4G connectivity. 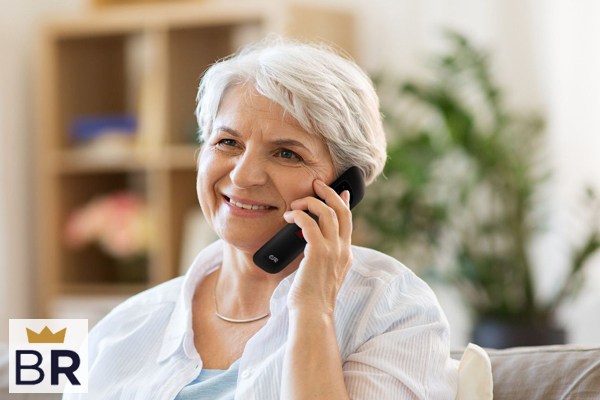 Call clarity is one of the most important things we consider when selecting the top flip phones. 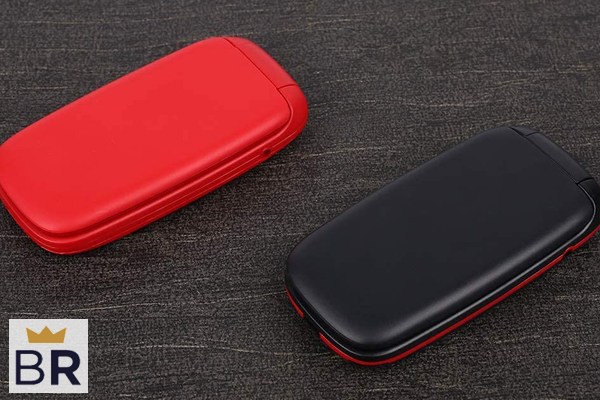 We carefully note the size, shape, and weight of the flip phones we review, as the more convenient it is to carry a phone with you, the more likely it is you’ll have it when you really need it. 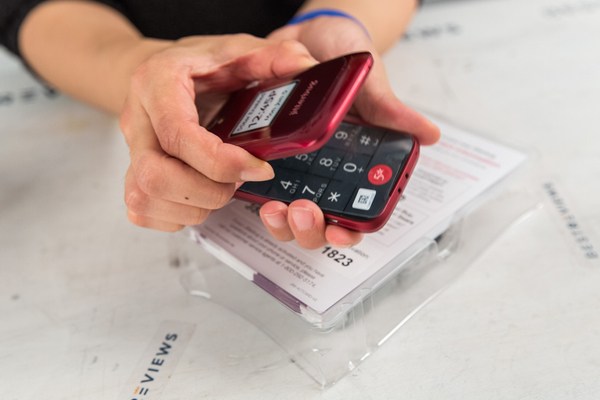 How easy each flip phone is to navigate and how quickly it moves between menus and functions are two things we pay close attention to when reviewing the best flip phones.

The following are some of the features available on flip phones.

Bluetooth: Some flip phones come equipped with Bluetooth technology that enables you to use wireless accessories such as earbuds and headsets.

Data: You can text, get email, browse online, play games, and check your social media on some flip phones. If this is important to you, make sure you have a phone and a plan that allows for data usage.

Hearing assist: Many flip phones have technology in place to make hearing a little easier. If this is a necessity for you, make sure the phone you’re considering offers this capability.

Locked/unlocked: When a phone is locked, it can only be used on one network. If you want to pick your phone first and your carrier second, you'll need an unlocked flip phone.

Outer screen: Most flip phones have some sort of display on the outside so you don't have to open the phone to see the time, the date, or who is calling.

QWERTY keyboard: If needed, you can find a flip phone that has the full keyboard – often it's an on-screen digital interface that takes up most of the screen.

Push-to-talk: Think of it like a walkie-talkie. you only need to press a single button to communicate.

T9 (“text on nine keys”): T9 is the name of the predictive text technology that enables you to type with only the number keys 1 through 9.

Touchscreen: Besides the few buttons on the dial pad, many flip phones offer touchscreen technology.  Because of the design of the phone, however, this can take a little getting used to.

Flip phones are designed for one-handed use. Some users become so adept at using a flip phone that they don't even have to look at it – even to text!

Flip phones have a longer battery life. Because you're not running a hundred apps and constantly scrolling through feeds, some flip phone users can go days without charging their phone.

Flip phones are affordable. If you're used to looking at $1,000 price tags, you're about to get the good kind of sticker shock.

Inexpensive: A no-frills phone that does the basics costs from $10 to $20. If you spend up to $40, you’ll get a few features that you might expect to find on a smartphone, but you're still getting a pretty basic phone.

Mid-range: Flip phones that cost between $40 and $80 are best described as affordable hybrids, combining the best of both worlds, with more features, but still reasonably priced.

Expensive: Flip phones that cost between $80 and $130 are still very affordable compared to what a new smartphone costs. At this point, though, you have to start asking yourself if you truly need all of these features. If you do, would it be better to stick with a smartphone? You can spend more than $130 (yes, there are some that cost over $700!), but it's hard to recommend a flip phone that is too pricey. 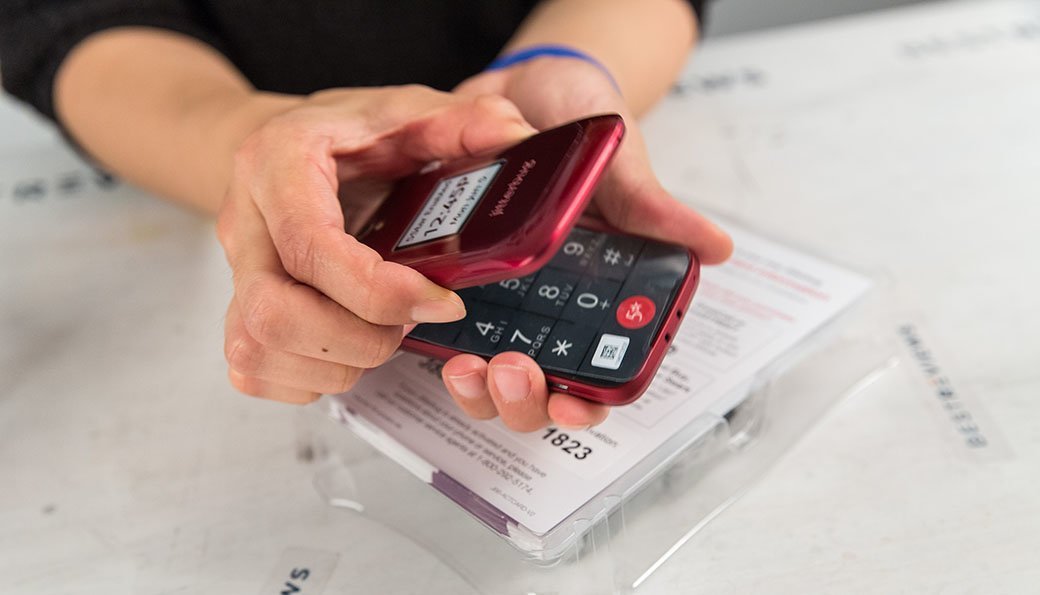 More than 80% of workers keep their smartphone in view throughout the workday. The distraction results in about two lost hours of productivity per worker per day. Switching to a flip phone at the office could make you management’s favorite employee!

A. Yes. As a matter of fact, users are becoming more outspoken about the benefits of the flip phone. It's also making a stylish comeback.

A. Flip phones are ideal for senior users for several reasons. First, the numbers are larger, making them easier to see and use. Also, there are fewer features and ways to navigate than on a typical smartphone, so the learning curve isn’t very steep. Many flip phones come with volume enhancers for those whose hearing is diminishing. Factor in the affordability and flip phones seem to be an ideal choice for seniors.

Q. Can I be tracked on my flip phone?

A. Yes. Just because you use a flip phone, it doesn't mean you'll be off the grid. Flip phones still need to communicate with cell towers to have service. As long as your phone is on, it can be tracked. 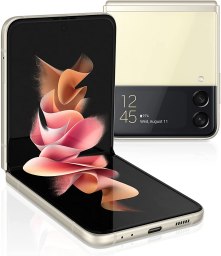 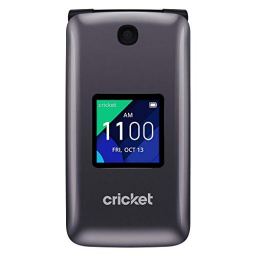 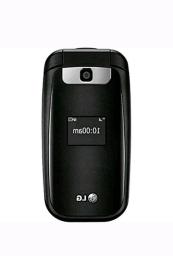 Top Pick
LG
B470
Bottom Line
If you're looking for a simple option for business, the LG B470 is well worth your consideration.
Shop Now

Top Pick
Kyocera
DuraXV Extreme
Bottom Line
A solid phone that is built around being able to stand up to extreme conditions.
Shop Now 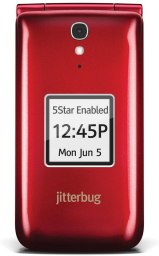 Top Pick
Jitterbug
Flip Cell Phone
Bottom Line
A good choice if simplicity is your top priority in a cell phone and you don't mind its price and limitations.
Shop Now 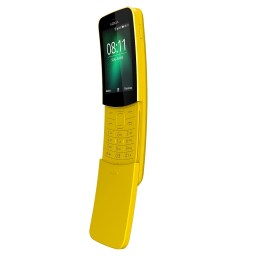 Top Pick
Nokia
8110 4G
Bottom Line
The Nokia 8110’s charming design may catch your attention, but its battery life and convenient collection of productivity apps will hold it.
Shop Now 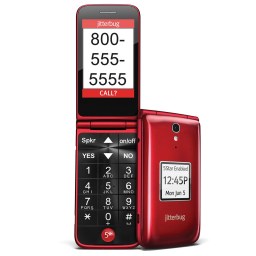 Top Pick
TracFone
My Flip 2
Bottom Line
Thrifty shoppers who need a basic but dependable model should consider the My Flip 2.
Shop Now 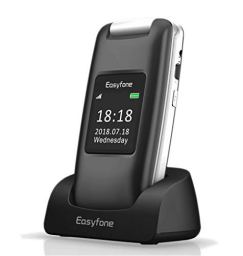 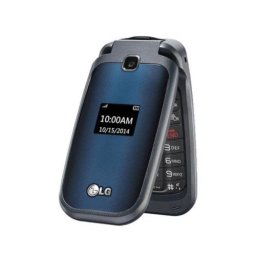