The call blocking and filtering features of this AT&T set are at the top of its several welcome features.

Takes a little effort to set up the blocking and filtering system. 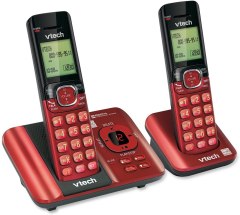 An expandable cordless system is an ideal fit for businesses that need to connect with users via landlines.

Its LCD screen could be brighter. 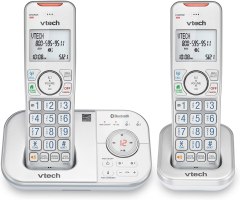 This VTech cordless landline allows you to make and receive calls from your smartphone via Bluetooth.

Pairs over Bluetooth with a cellphone to make and receive calls on a cellular plan with control by smart assistants. Also comes with call blocking, visual ringer, large buttons, and digital answering system.

Bluetooth pairing can be difficult especially at first.

This set offers both corded and cordless functionality and a built-in baby monitor feature.

Baby monitor alerts designated contacts when it detects a baby crying. Big, flip-up screen on the base station. Can remain connected during power outages with charged handset. One-touch call blocking. 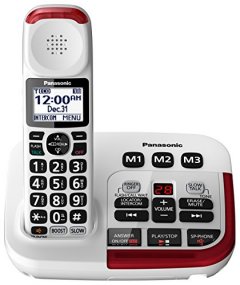 Accessible, easy-to-use cordless phone geared to those with hearing difficulties.

If you’re not quite ready to give up your landline, a cordless phone is a great solution. You don’t have to worry about being tethered by pesky phone cords, so you can take your phone to any room in your home. Cordless phones these days have clearer signals than landlines from before.

When you’re hunting for cordless phone sets, consider the size of your home. You may need to purchase multiple sets to place throughout your space, especially if you don’t live alone. Also consider features such as a phone directory, call blocking, signal range, and battery life. Answering machines are a fairly common feature in cordless sets.

We take pride in suggesting some top quality sets for your perusal. Our reviews cover the points above, in addition to price point. Before you decide on a purchase, read through our suggestions in this buying guide to make an informed purchase. 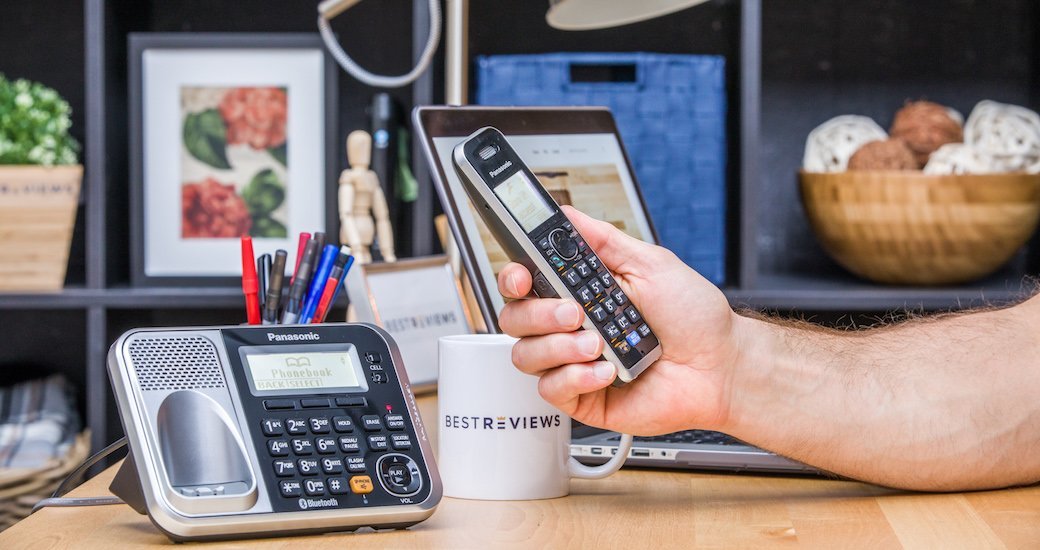 Some cordless phones are designed to handle two separate phone lines, even offering distinctive rings to indicate which line is being called.

In the past, many people had issues with interference on their cordless phones. Signals from domestic radios, baby monitors, WiFi, Bluetooth, and other sources are all flying around all the time. They can interfere with a cordless phone, resulting in poor signal, issues with clarity, or literally picking up a radio station, or even someone else's phone conversation through your handset.

DECT 6.0 provides excellent security — so you shouldn't get any interference from other signals — plus great sound quality and range. 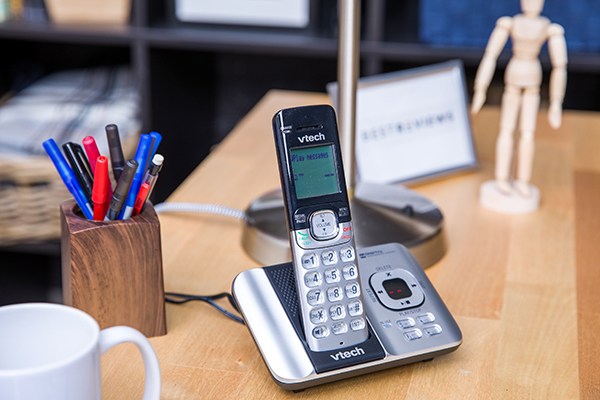 When exploring the various cordless phones available, we consider the useful features each provides, such as a phone directory, caller ID, and call blocking. 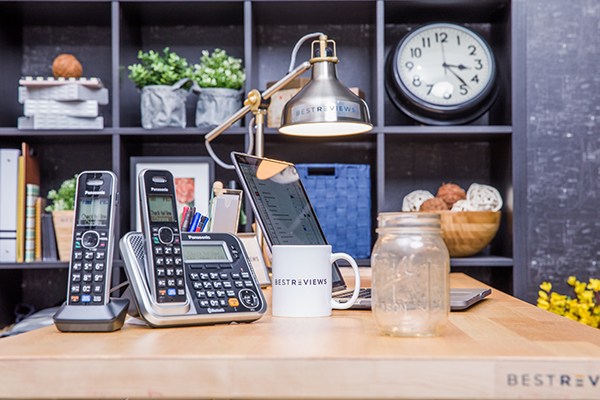 For larger homes and offices, multiple handsets are often needed. We look for options that include several handsets for convenience and value. 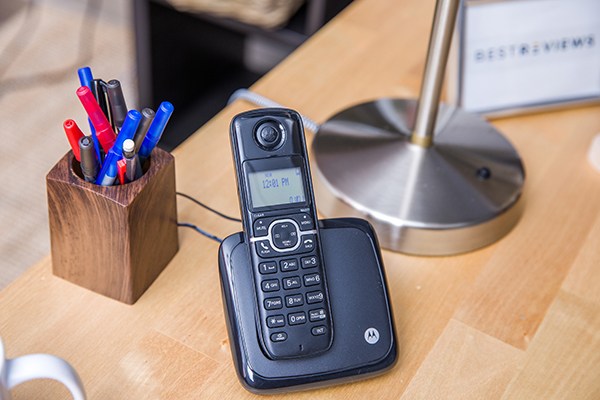 When considering various cordless phones, we think about the size and readability of the buttons and the degree to which each model is intuitive and user-friendly. 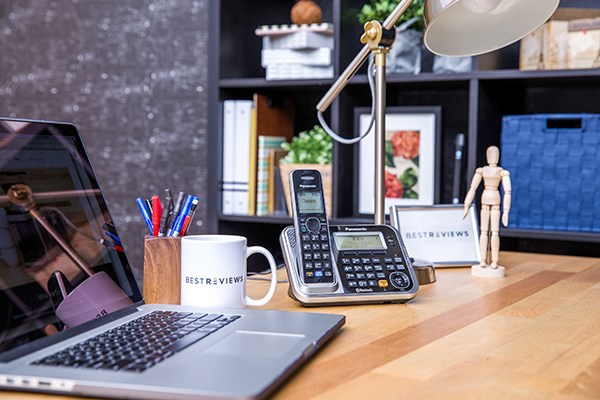 It’s important to understand the battery life and charging requirements of a phone before buying it. We consider whether each model can run on regular rechargeable batteries or requires a proprietary battery pack that is more difficult to replace. 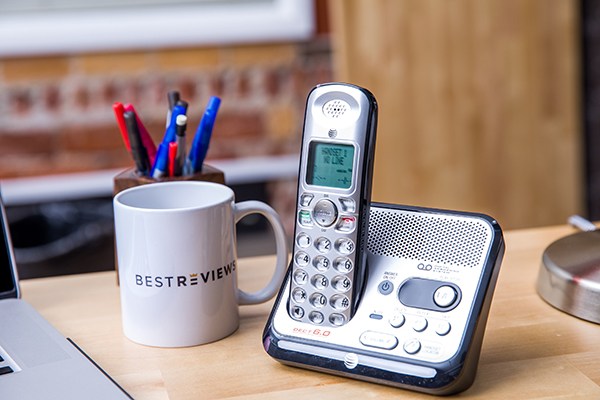 Signal range determines how far a user can travel from the docking station without losing connection. We assess signal range for each phone to determine which models are best for larger households or phone calls in the backyard. 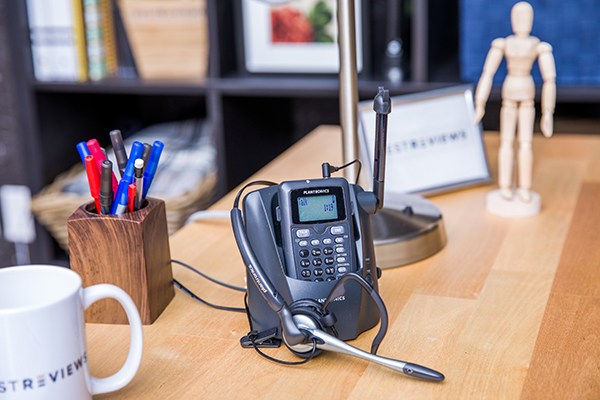 Having a phone that is comfortable to hold against your face is important, especially for those who frequently participate in phone meetings or long conversations. We look at comfort, weight, and grip when choosing phones. 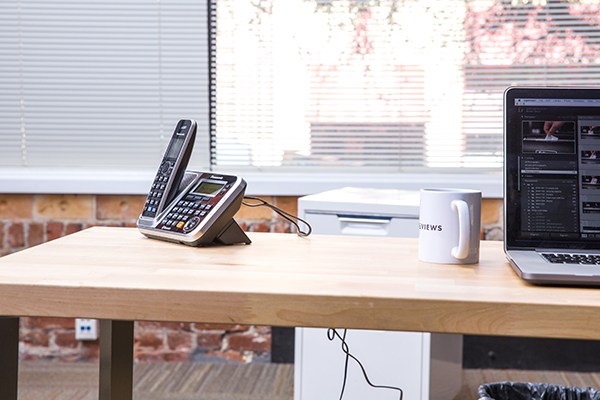 Cordless phones have a broad range of price points. We look at simple, budget-friendly models; mid-range models with a few solid features; and high-end models with advanced features. This helps us find quality options for every budget. 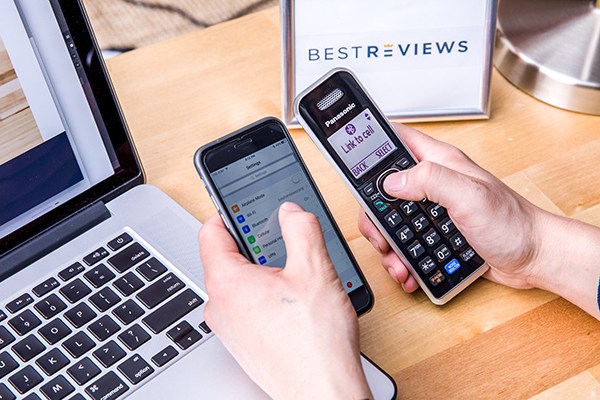 Some models allow you to sync your cordless phone to your mobile phone via Bluetooth. We research ease of setup and the overall functionality of this feature. 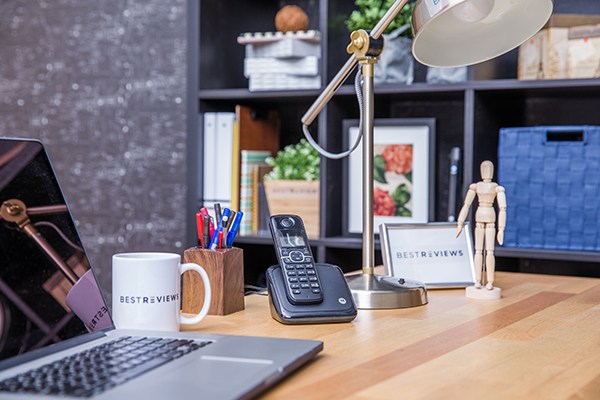 Some users prefer a compact phone that requires little space. Others prefer a large handset with a sturdy base and easy-to-read buttons. We explore a variety of phone sizes and shapes to find an appealing selection for all consumers. 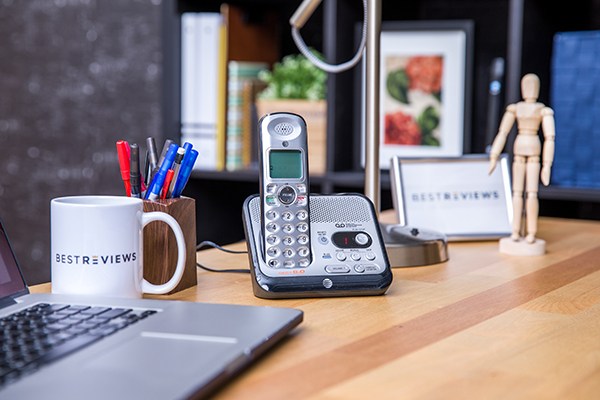 For businesses and large households, a cordless phone with an option for multiple call lines can be useful. We look at the number of lines each model provides in our assessments.

Considerations for selecting a cordless phone

Here are some of the factors you should consider when picking out the perfect cordless phone to fit your requirements.

Think about how many handsets you need. If you live in a small house or apartment, a single handset will probably suffice. However, many people like to have at least two, especially in a home with more than one story, so they don't have to run up or down the stairs when they hear the phone ringing. Some cordless phones come with five or more handsets, which is great if you have an extremely large home, or if multiple household members want a handset in their room.

Did you know?
Some cordless phones have a call waiting function with their caller ID, so you can tell who's trying to reach you when you're already on the phone.
STAFF
BestReviews

In this day and age, who actually memorizes phone numbers?

All but the most basic cordless phones have a number directory, allowing you to store important contact information in your phone for easy access. Most models can store between about 30 and 50 numbers, but some models can handle 70 or more.

"Some cordless phones on the market still use older technology, but we recommend avoiding any models that don't use DECT 6.0."
STAFF
BestReviews

If you want to be able to screen your calls — so you avoid telemarketers or unknown numbers — look for a model that has caller ID.

If you've stored a number in your phone's directory, the caller ID will flash up with their name, so you don't have to worry about recognizing all your contacts' numbers.

Testing cordless phones
We considered 53 models of cordless phones before picking our best. We then purchased our top pick and tested its connectivity and audio quality in our lab.
STAFF
BestReviews

Nobody likes nuisance calls, and often there's nothing you can do about them.

However, if you choose a cordless phone that offers call blocking, you can program in nuisance numbers and your phone will automatically block them when they call. Problem solved.

A cordless phone's signal range determines how far you can go from the base/docking station before you start to lose signal. A long signal range is important if you have a large house or if you want to be able to use your cordless phone out in the yard.

Few manufacturers give a concrete distance measurement for range — perhaps because multiple variables can affect it — but our research has found that some phones have a range of as little as 60 to 80 feet, whereas others work perfectly 300 feet from their base.

Cordless phones have a much longer range outdoors, because fewer obstacles are around to block the signal.

Did you know?
Some cordless phones work with an additional "range extender" that boosts the distance you can travel from the base with your handset.
STAFF
BestReviews

Unless you opt for a basic model, most cordless phones come with a built-in answering machine, with most able to store roughly 10 to 15 minutes of messages.

While not everybody wants or needs an answering service, others find it an extremely useful feature to have.

A less common, but rather interesting, feature some cordless phones offer is linking your cell phone to your landline phone via Bluetooth.

This lets you receive cell phone calls straight to your cordless phone handset, so you don't have to carry your cell phone with you at home.

Did you know?
Some cordless phones integrate with your cellular phone, which means you can answer cell phone calls on any of the cordless handsets in your house.
STAFF
BestReviews

Let's examine the average cost of a cordless phone and what you get for your money. 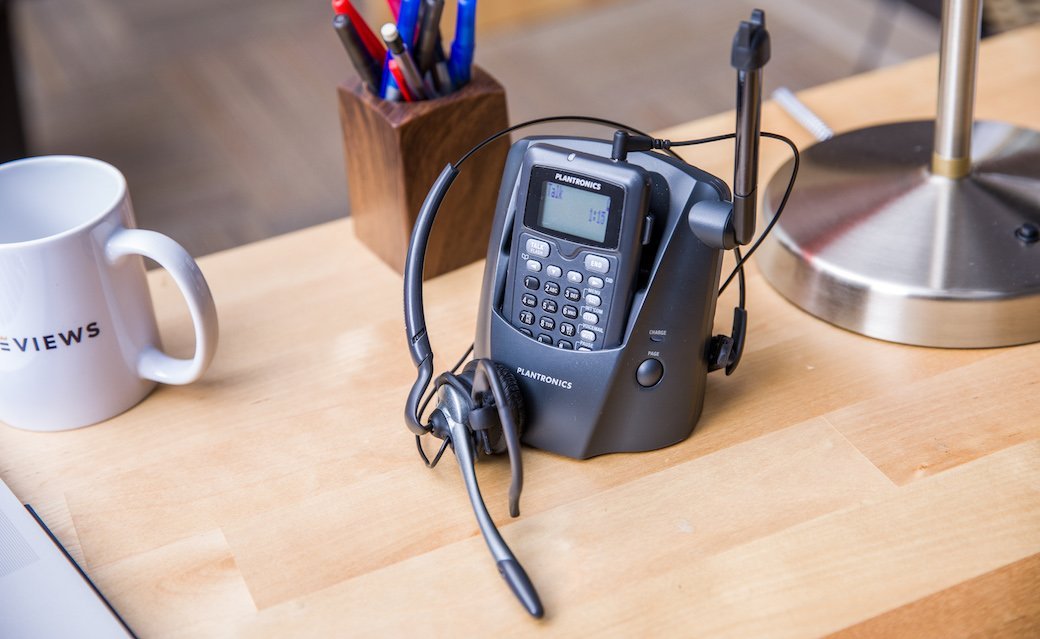 While some cordless phones cost far more than others, we've found the cost is usually worthwhile for all the extra features you receive.

Q. What kinds of extra features can cordless phones offer?

A. You might be surprised about some of the features available on high-end cordless phones. Besides those we've already covered in depth, we've found phones with built-in baby monitors and optional key detectors, and phones that let you voice page another cordless phone handset anywhere in the house, so you don't have to yell for your family members when you need them. Some users may find these extras to be overkill, but they can be extremely handy for others.

A. Cordless phone handsets are often fairly small, which is problematic for people with poor eyesight, or issues with dexterity or hand-eye coordination. However, you can find large button cordless phones, making dialling easier for everyone.

A. Some, but not all, cordless phones can support two separate lines. This is useful if you're running a small business or you have a particularly chatty teenager at home. Often, these phones ring at two distinctive pitches so you can tell which line is receiving a call.

Q. Can I use a cordless phone if I wear a hearing aid? 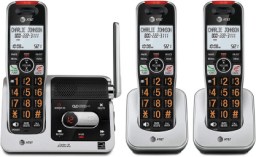 Best of the Best
AT&T
BL102-3 DECT 6.0 Cordless Phone for Home
Bottom Line
The call blocking and filtering features of this AT&T set are at the top of its several welcome features.
Shop Now 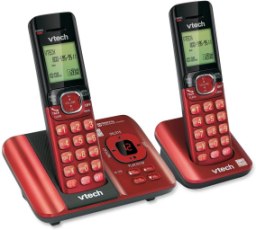 Best Bang for the Buck
VTech
CS6529-26 DECT 6.0 Phone Answering System
Bottom Line
An expandable cordless system is an ideal fit for businesses that need to connect with users via landlines.
Shop Now 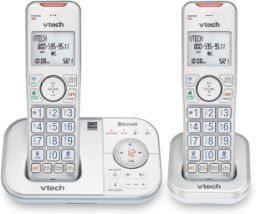 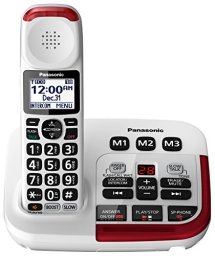 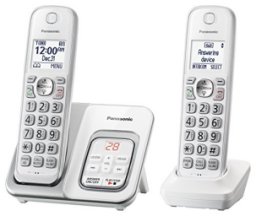 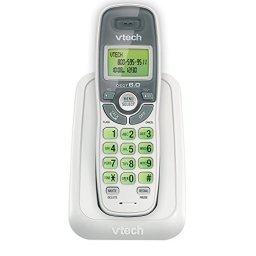 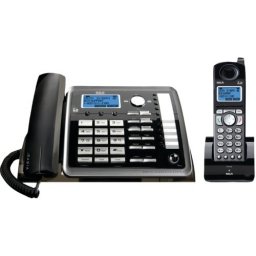 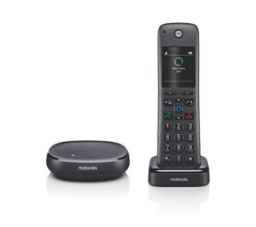 Top Pick
Motorola
axh01 Telephone with Alexa
Bottom Line
If your home and devices are already connected via Amazon Alexa, this cordless phone is made for you.
Shop Now