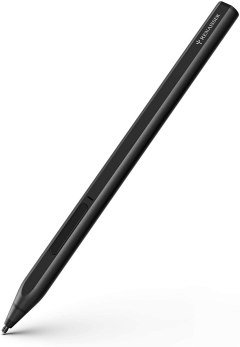 The ergonomic design provides a convenient and accessible option for everyday use.

Built-in magnet for easy transport and attachment. Fiber tip includes high-pressure sensitivity for drawing, writing, or taking notes. Quick-charging and long-lasting battery, making it useful for extended periods of time. Erase and right-click keys on the side of the pen for easy access.

Some users reported difficulty with the tilt function. Thinner than a typical stylus. 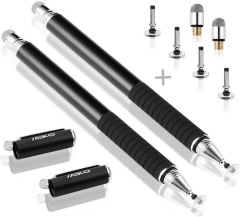 A great buy for the price with plenty of replacement tips, good accuracy, and a comfortable grip.

Nicely weighted with a good feel in the hand. Two sizes of stylus tips, plus replacements, along with screen cleaning cloth. Tips are easy to swap out. Fine tip is accurate and precise. Compatible with iOS and Android screens. Comfortable rubber grip.

Top part of tip can wear and break off after several hours of use. May not work well on screen protectors. Screen may pick up edge of the disc, marring artwork. 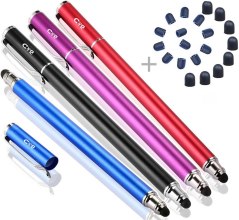 A double-ended stylus that can be used on either smaller smartphone screens or tablets.

Compact but long enough to hold comfortably. Tips are easy to replace, and extras are included. Double-sided pen has a larger tip on one end and a smaller one for precise use. Keeps screens smudge-free.

Will not work if device has a screen protector. Tips aren’t very sensitive and do not work well for handwriting on screens. Tips can split after only a few hours of use. 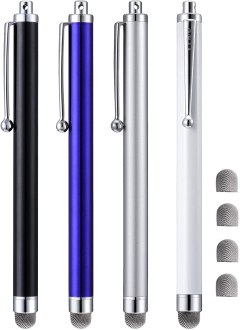 Best for screen tapping only, this 4-pack of pens is clearly made for a single purpose, and does it well, with a more sensitive fiber-covered tip.

Cloth-covered rubber tip is less likely to mark or smudge screen. Very sensitive, getting a response from the device with just a light tap rather than having to push hard. Tips can be replaced easily and quickly.

Stylus tip gets visibly dirty quickly. Like most non-capacitive styli, does not work well for drawing or detailed graphics work. 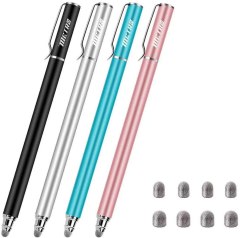 With dual tips and universal features, this pen is fit for a variety of screens and purposes.

Small tips allow narrow transfers in writing and playing mobile games. Large tip is ideal for drawing and larger devices. Product includes four replacements for each size. Compatible for all touch screens such as tablets, smartphones, and laptops. Available in various colors.

Stylus tip is not as sensitive as other products, so users may have to apply additional force to get results.

The rise of tablets has made it possible to write electronic notes, surf the web, and create digital artwork wherever you go. But it can be difficult to create precise lines or shapes using just your fingertip. If you want to use your tablet to its fullest potential, you need a stylus pen.

Stylus pens come in many different types, but each does more or less the same job: mimic the actions of a human finger on the touchscreen. More often than not, the tip of the stylus pen is much smaller than a fingertip, so it can draw and write more precisely and feel like you’re using a traditional pen or pencil.

Some stylus pens are simple, but some come with advanced features like different pressure-sensitivity levels and programmable buttons that enable you to perform specific tasks more quickly. If you’ve never used a stylus pen before, it can be hard to know which features are worth the extra money. 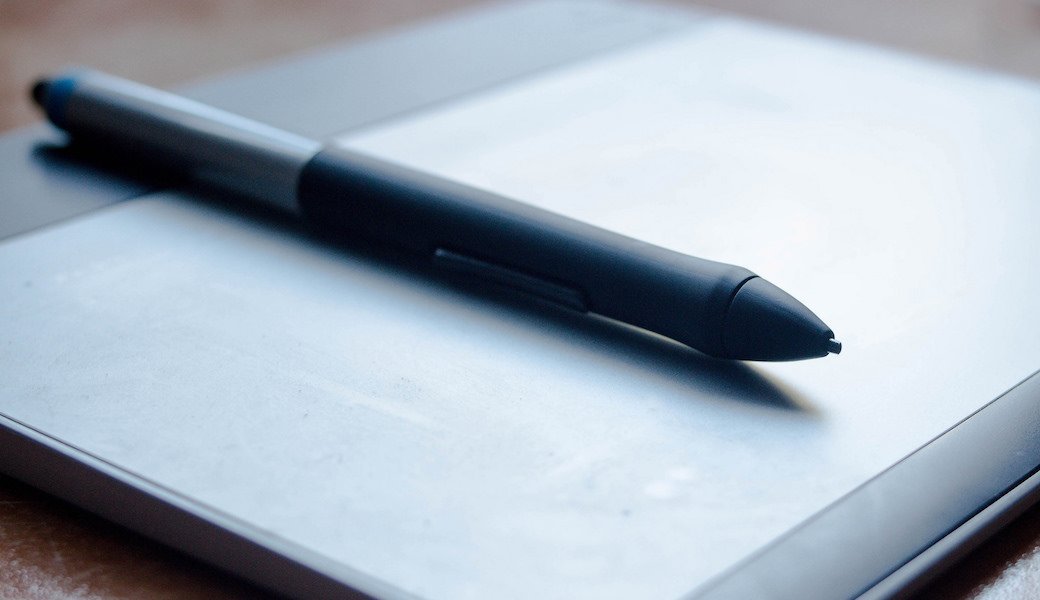 Some rechargeable stylus pens come in packs, so you can have one charged up and ready to use when the one you’re using dies.

What do you want the stylus pen to do?

The first thing you have to think about is how you plan on using the stylus pen. Someone who wants to use it for writing notes is going to have very different needs than someone who plans wants to create digital artwork.

You might think it’s a good idea to go all out on a high-end stylus with advanced features, but that isn’t always necessary. A basic stylus with a narrow point will suffice just fine for writing or surfing the web. But it might be worth paying a little extra if you’re going to use the stylus to create artwork. More advanced controls enable you to make different types of lines and shapes.

Consider how you plan to use the stylus most often and make sure that the one you choose has all of the features you need without a bunch of extras that you won’t use.

What type of tablet will you use with your stylus pen?

Certain tablets like the iPad aren’t pressure sensitive, so there’s no point in buying a stylus with multiple pressure-sensitivity levels if your tablet doesn’t support it. Some apps might have workarounds or additional functionality that can support these features even if the tablet itself does not, so it’s also a good idea to look at the apps you most commonly use. See if any specific stylus brands are designed to be compatible with the type of tablet and apps you’ll be using most often.

Comfort: A good stylus pen should fit comfortably in your hand and have a good balance and weight to it without being too heavy. People have their own preferences about the thickness of the stylus they use, but if you suffer from carpal tunnel syndrome or a similar condition, you might find a thicker pen more comfortable to use. The best stylus pens are made of a comfortable, nonslip material. You don’t want to have to worry about it sliding through your fingers while you’re trying to use it.

Nib or tip: The nib is the part of the stylus that comes in contact with the touchscreen. Stylus nibs can be either fabric, rubber, or plastic.

Power: Basic stylus pens are essentially a pen with a rubber nib on the end, and these don’t require charging. But if you’re interested in a Bluetooth or electronic stylus pen, you’re going to need to pay attention to how it charges. Electronic styluses can either use a rechargeable or replaceable battery.

Expert Tip
Make sure that the stylus pen is long enough to fit comfortably in your hand.
STAFF
BestReviews

Not everyone needs a stylus with these features, but if you plan to use your stylus often, you might find one or more of them useful.

Palm rejection: Some electronic styluses come with palm rejection. This technology senses the difference between the tip of the stylus and your palm resting on the screen, so it doesn’t mistakenly draw lines if the side of your hand touches the screen. This can be a useful tool for artists, writers, and anyone who doesn’t want to have to worry about keeping their hands off the screen.

Programmable buttons: The most advanced stylus pens come with multiple buttons on the pen that you can program to perform specific actions. For example, you can set up one of the buttons to undo your previous stroke. These controls can save you a lot of time because you won’t need to navigate around in the app in order to make these changes.

Case: Some stylus pens come with a carrying case. While this can be a nice feature for some, it isn’t necessary for everyone, especially if your tablet case already has a stylus holder.

Did you know?
Some stylus pens come with a clip so you can attach it to a pocket or your tablet case.
STAFF
BestReviews

Inexpensive: A basic stylus pen without any special features can cost less than $10, but it’s important to make sure you choose a good-quality one that won’t wear out. These stylus pens often come in packs, and some include a set of replacement nibs.

Mid-range: You can expect to pay at least $35 if you’re looking for an electronic stylus with advanced features like palm rejection or multiple nib types.

Expensive: The most advanced stylus pens include thousands of pressure-sensitivity levels and multiple programmable buttons. These can cost anywhere from $80 to $100. 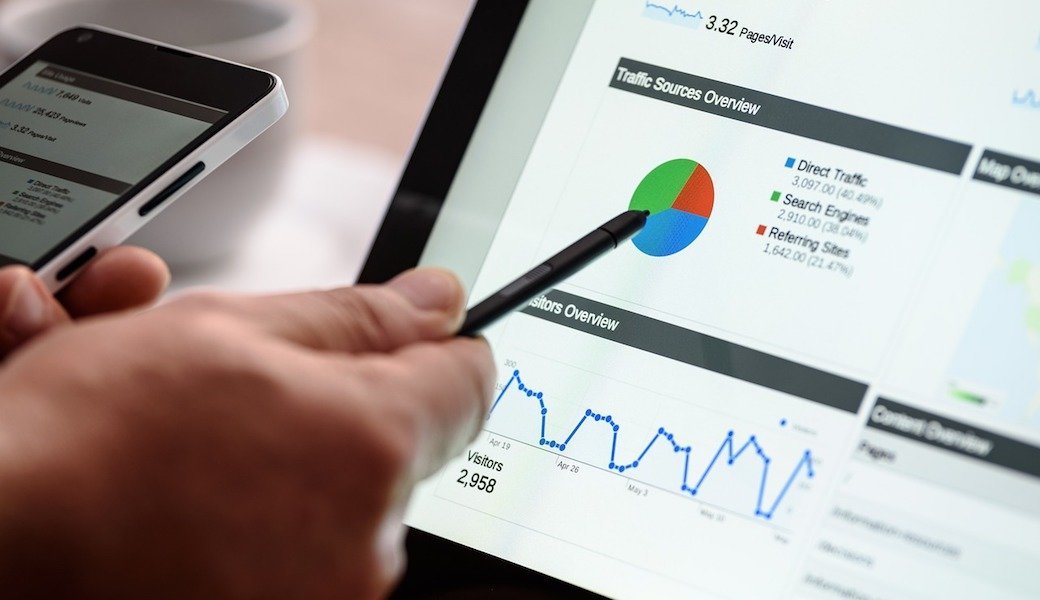 Double-sided stylus pens allow you to choose between a smaller nib for smartphones or more precise applications and a larger nib for general use.

Q. What causes the stylus nibs to wear out?

A. There are several factors that can influence this, including the quality and type of nib, how often you’re using it, and the pressure and angle at which you’re using it.

Q. How do I connect my electronic stylus to my tablet?

A. Many stylus pens use Bluetooth to pair with other devices, so all you have to do is turn on the tablet and stylus and sync them in your settings. Your instruction manual should explain how to do this.

Q. How long does an electronic stylus hold a charge?

A. Most can hold a charge for at least five hours, and some can last several days at a time. Factors like how often you use the stylus, the external temperature, and the quality of the battery all play a role. You should be able to find out how long the stylus holds a charge by looking at your user manual or checking out the pen’s product page. 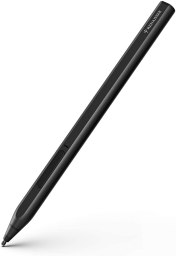 Best of the Best
RENAISSER
Stylus for Surface
Bottom Line
The ergonomic design provides a convenient and accessible option for everyday use.
Shop Now 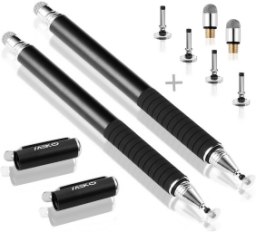 Best Bang for the Buck
MEKO
Universal Stylus
Bottom Line
A great buy for the price with plenty of replacement tips, good accuracy, and a comfortable grip.
Shop Now 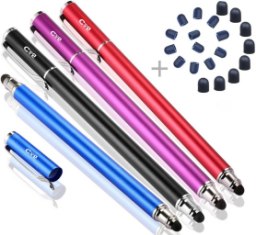 Top Pick
Bargains Depot
2-in-1 Universal Capacitive Stylus
Bottom Line
A double-ended stylus that can be used on either smaller smartphone screens or tablets.
Shop Now 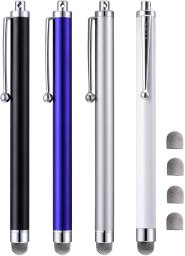 Top Pick
CCIVV
Hybrid Mesh Fiber Tip Stylus Pens
Bottom Line
Best for screen tapping only, this 4-pack of pens is clearly made for a single purpose, and does it well, with a more sensitive fiber-covered tip.
Shop Now 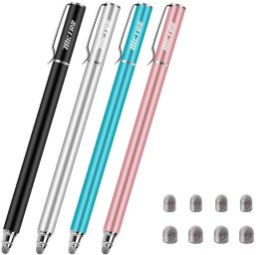 Top Pick
METRO
Universal Stylus Pens for Touch Screens
Bottom Line
With dual tips and universal features, this pen is fit for a variety of screens and purposes.
Shop Now 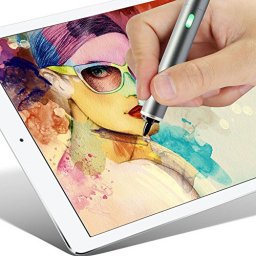 Top Pick
Letech+
Slim Pro Stylus Pen
Bottom Line
While it has a much shorter battery life than similar pens, this capacitive stylus pairs with a wide range of devices and performs reliably.
Shop Now 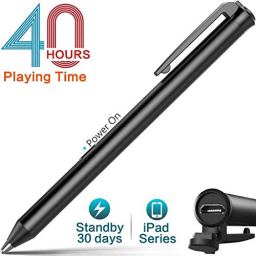