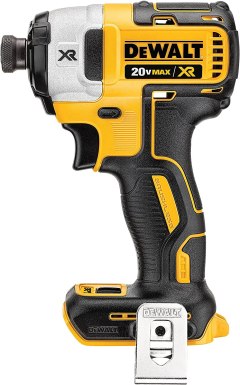 Our DIY expert approves this tool-only option, ideal for those with an existing collection of DeWalt 20v tools. 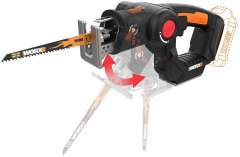 The innovative pivoting head of this model allows it to transform into multiple tools at the same time.

Switch between the jigsaw head to the reciprocating saw based on personal preferences. Adjust the variable speed based on the project. Dust blower keeps workspace clear. Cordless, so no hassle from tangled wires or unattached power sources.

Battery power isn't as long-lasting as other models on our list.

This is a simple, yet efficient, cordless option that works best in smaller spaces.

Battery and charger must be purchased separately.

With variable speed and tool-free blade change, this model comes with all the fundamental requirements of a reciprocating saw.

Pivoting blade remains stable as you turn saw over turns and angles. Electric brake stops quickly and efficiently, ensuring the user's safety. Full package includes battery and charger, so customers won't have to purchase their own.

Some troubles with the locking mechanism of the device.

This device integrates features to keep your hands safe and steady while in operation.

The blades are not as easy to exchange as presented.

A reciprocating saw is one of the best tools to have on hand when you're doing demolition work because of its ability to cut through just about anything. Whether you’re working with wood, metal, plastic, tile, or composite, almost nothing will stop a reciprocating saw with the right blade.

Powerful, reliable, and tough, reciprocating saws are also great for a variety of other DIY jobs, like cutting sheetrock when installing drywall. A good reciprocating saw is an invaluable addition to your toolbox that will come in handy for years. 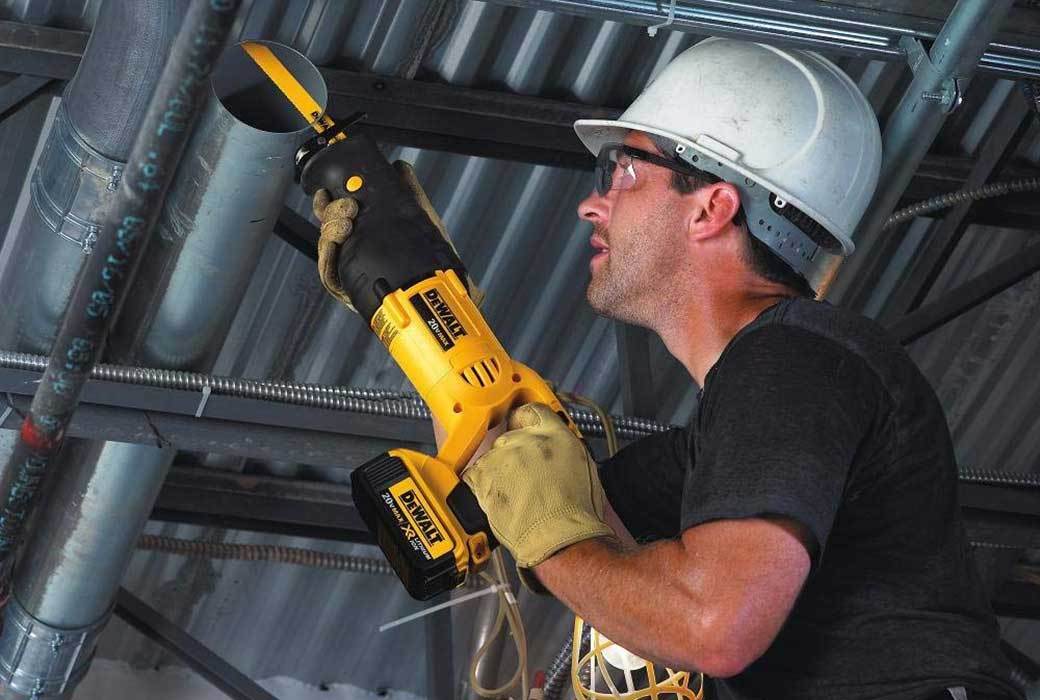 If you're considering buying a bare tool, it's important to understand that these items have no battery or charger. Buying a battery and charger separately could double your price.

What is a reciprocating saw?

One dictionary definition of “reciprocate” is to move backward and forward in a straight line. In essence, that is what a reciprocating saw does. A powerful electric motor drives the blade at over 2,000 strokes a minute for nearly effortless cutting. (Blade length varies and is up to 12 inches in some cases.) With a variety of blades available, there's little a reciprocating saw can't handle.

As with most electrical tools, you have a choice of corded or cordless power with a reciprocating saw. In the past, battery-powered models were criticized for lack of performance, but with all of the improvements that have been made, there is now little difference between battery power and cord power in a reciprocating saw. Indeed, many manufacturers make models that are virtually identical except for the power source.

Here’s are the main factors to keep in mind about of each type of saw.

Did you know?
Cordless reciprocating saws all produce similar power, but a higher amp-hour (Ah) battery will deliver that power more consistently and for longer.
STAFF
BestReviews

A reciprocating saw can have a brush motor or a brushless motor. Brush motors cost less and are often found in corded tools. Brushes eventually wear, so this type of motor has some maintenance requirements. Brushless motors require virtually no maintenance, and they usually last longer. Furthermore, they make more efficient use of power. If you’re going for a cordless saw, a brushless motor is preferred, albeit more expensive.

On most reciprocating saws, the blade action is back and forth. However, some also have orbital (slightly elliptical) action. This is designed to deliver more aggressive cutting. That's great for demolition work, but it can be too severe for some tasks. The ability to turn orbital action on and off is a big advantage.

The shoe acts as a blade guide and can be adjustable for both depth and angle. Extending the shoe can help maximize blade life by allowing you to use different sections of teeth.

“Stroke” is a figure usually quoted by the manufacturer, and 1 1/8 inches is common. However, the stroke doesn't have a lot of bearing on performance. Blade length, rather than stroke, defines the maximum thickness of the material you can cut. The only real benefit of a longer stroke is that it distributes blade wear more evenly.

Most reciprocating saws are designed to be used with two hands, and rubberized areas provide a good grip. These saws are often quite long, which can create problems in confined spaces. Some saws have their motor at an angle, allowing them to be more compact. They may also be designed for one-handed operation.

Caution
Some reciprocating saws are supplied without a blade. Check before ordering so you know what you’re getting. Fortunately, an additional blade isn’t expensive.
STAFF
BestReviews

The lowest price you’ll find for a reciprocating saw is $40 or $50, and this will be for a corded tool. An entry-level tool like this could be suitable if you're looking for something to occasional use only. However, we generally recommend spending a little more.

Between $70 and $120, you'll find a selection of very good reciprocating saws from trustworthy brands. You'll find high-quality cordless tools in this price bracket, too, but they will almost all be bare tools. A battery and charger cost extra, and these add-ons would likely double the price.

If you're looking for an all-in-one cordless kit that provides a reciprocating saw, battery, charger, and a bag or carry case, expect to pay between $300 and $400.

The Worx WX550L 2-in1 Reciprocating Saw and Jigsaw is a very interesting tool. It's not designed for heavy-duty cutting, but it's certainly worth considering if you have a lot of different tasks and want the versatility this saw provides.

Getting a reciprocating saw into tight spaces can sometimes be a challenge, but with the DeWALT DCS387B, that's much less of a problem. The motor is mounted at an angle, so it's quite compact, yet the performance is excellent. For a high-quality brand, it's surprisingly affordable, too. 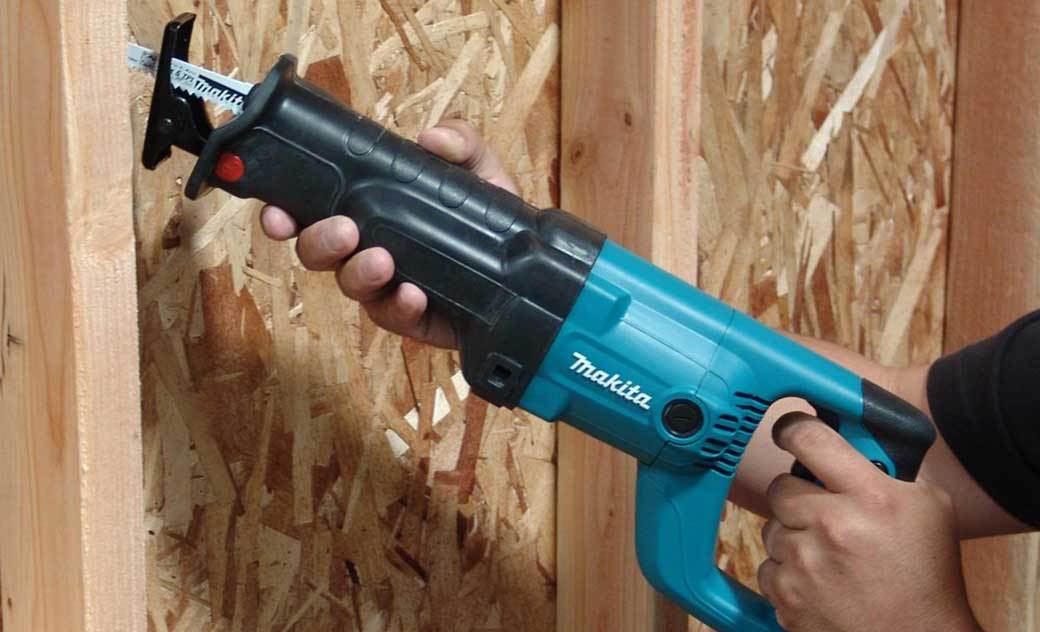 A reciprocating saw can be a very versatile tool. With the right blade, you can cut through metal and ceramic, and you can rip through old wooden beams without worrying about concealed nails.

Q. Is a reciprocating saw better than a jigsaw?
A. Actually, a jigsaw is a type of reciprocating saw. They have a similar cutting action. They can even share some tasks. However, a jigsaw has a finer blade, is capable of more delicate work, and mostly cuts horizontally. A reciprocating saw has a thicker blade that is designed for rapid, aggressive cutting, and it is often used vertically. It would be very difficult to use a jigsaw for that kind of job. On the other hand, you wouldn't want to cut a laminate kitchen countertop with a reciprocating saw; they are too powerful for that type of job, and you would almost certainly damage the surface. 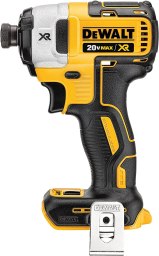 Best of the Best
DEWALT
20v Max XR
Bottom Line
Our DIY expert approves this tool-only option, ideal for those with an existing collection of DeWalt 20v tools.
Shop Now 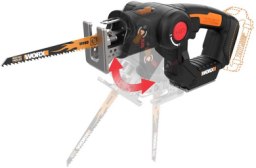 Best Bang for the Buck
Positec Worx
WX550L Axis 2-in-1 Reciprocating Saw and Jigsaw
Bottom Line
The innovative pivoting head of this model allows it to transform into multiple tools at the same time.
Shop Now

Top Pick
Milwaukee
M18 SAWZALL
Bottom Line
Quality, performance, and a brushless motor place this in a class of its own.
Shop Now