Light or medium work doesn't hold this saw back from its job.

Has tool-free chain tightening. Relatively light even when the battery is on. Charger and battery are included. Has an auto-oiling feature to keep the saw going for long periods of time.

Heavy-duty work and prolonged usage may cause some issues.

A dependable, light chainsaw that is great for small jobs.

Easy to start up and stop thanks to its battery-powered design. The battery lasts a good amount of time and doesn't add a ton of weight to the saw. Easy to adjust the chain based on workload.

The battery and charger are sold separately. 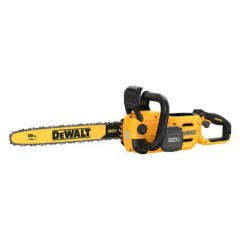 A solid saw that will work well for experts on the job.

Despite being electric, this saw has the same power output that a gas-powered one does. Has a tooled chain system that is easy to understand. Includes a bar cover for protection after the job is done.

The battery life is quite short compared to other saws.

A great saw for hard-to-reach branches.

Has a 15-foot reach. Has minimal kickback even when the saw is fully extended. Attached limb hook makes it quite easy to remove branches without having to stop work progress.

Some users felt that the power of the saw is lacking.

DEWALT has an almost legendary reputation for tough, high-performance tools, and its cordless chainsaws carry on the tradition. High-quality components and attention to detail are trademarks of the brand, resulting in a range of well-balanced, user-friendly models. They’re not the cheapest cordless chainsaws on the market, but for many it’s an investment worth making.

BestReviews has taken an in-depth look at specifications and options so you have the information you need to pick the best DEWALT chainsaw for your particular needs. We’ve looked at the differences between voltage and amp hours and how they impact your choice. We’ve also answered some of the common questions people have when buying a cordless chainsaw and included some straightforward safety tips.

If you’re ready to buy, our recommendations highlight the selection available in terms of both price and performance. For a more detailed look at what distinguishes them, please check out the following DEWALT chainsaw buying guide. 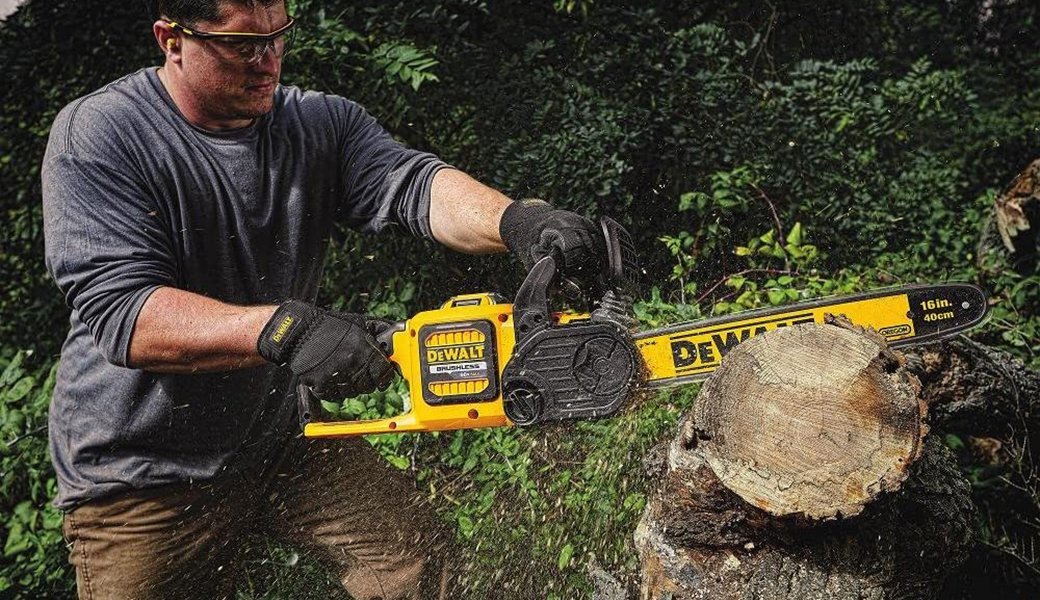 Cordless DEWALT chainsaws are easier to use than gas models, but they’re no less dangerous and shouldn’t be taken for granted. You still need to take the same safety precautions.

For those who might not be clear about what these two figures represent, it’s probably easiest to make a comparison with cars.

Volts: The power demand of the tool, what it needs to function, is the voltage (V). For a 12-volt tool, picture a compact car. For a 120-volt tool (which actually runs two 60-volt batteries in tandem), picture an eight-cylinder sports car. DEWALT chainsaws are rated at 20, 40, or 60 volts.

Amp hours: Amp hours (Ah) are effectively the fuel. The higher the amp hours, the longer a battery will deliver the same level of performance. On a small power drill, you might have a 1.5-amp hour battery. At the other end of the scale, some of DEWALT’s garden tools have 9-amp hour batteries.

Manufacturers seldom give run times because they’re impacted by all kinds of things, but DEWALT chainsaws probably run somewhere between 30 and 45 minutes per charge (though some users claim longer). You might welcome the break, but if you want to continue working, you’ll need a spare battery.

"Remember, buying a bare tool means you don’t get a battery or charger. You can save a lot if you already own equivalent DEWALT batteries, but if they predate the Max or XR, they may not be compatible with the tool."
STAFF
BestReviews

What voltage do you need?

20 volts: This DEWALT chainsaw is a lightweight, light-duty tool. It’s useful for a variety of jobs, but the 12-inch bar (the metal plate that the chain circles) indicates the limit of its capacities. In real terms, you’re looking at a maximum cut of maybe 8 or 9 inches.

40 volts: This chainsaw is a good all-rounder and is ideal for most homeowners — powerful but still manageable. This DEWALT chainsaw is fitted with a 16-inch bar. Felling trees that are a foot across is within its capabilities.

60 volts: DEWALT’s 60-volt chainsaw retains the 16-inch bar but delivers more power, so it should do the same job more quickly. If you have a lot of acreage, that could be a benefit, but in our view, this is more of a contractor tool.

DEWALT chainsaws have a couple of safety features that not all rivals share.

Chain brake: First, there’s the chain brake, a device you’ll find on gas chainsaws that stops the chain moving even if you press the trigger.

Lock-out: Second is a safety lock-out button, so the chainsaw can’t be started accidentally. As a further precaution, you need to squeeze the trigger and depress a button to make it run. It’s a one-handed operation, so it’s perfectly comfortable, but if you slip for any reason, the motor stops.

Automatic oiling and tool-free chain tensioning are common features on chainsaws, so it’s not surprising that all DEWALT models have them.

If you’re thinking about buying a range of cordless garden tools, It’s worth looking at other 40-volt DEWALT models, such as leaf blowers, hedge trimmers, and string trimmers, thus maximizing your investment in batteries.

All DEWALT chainsaws have a three-year warranty.

Work gloves: Custom Leathercraft Flex Grip Gloves
Good work gloves help prevent blisters when you’re dealing with branches and logs, and they can minimize vibration from your chainsaw. These are synthetic leather, so they’re tough, but they won’t crack or shrink in damp conditions. They have good insulation, protective padding, and Lycra stretch panels for comfort and dexterity. They’re an excellent value, too.

Hard hat: TR Industrial Safety Helmet and Earmuffs
A face shield is a must when using a chainsaw, because you never know what’s going to get thrown at you. This model incorporates earmuffs, which can be removed, and has interchangeable clear and mesh visors, making it very versatile. The helmet itself is approved to the Z89.1-2003 industrial standard.

Inexpensive: The cheapest DEWALT chainsaw is the 20-volt XR model at around $150 for a bare tool, though the battery and charger will probably double that cost.

Mid-range: At just over $200 as a bare tool, the Flexvolt 60-volt Max chainsaw is excellent value for such a powerful tool. Though, again, a battery will add $100 or so. If you’re considering such a high-performance model, you’ll probably want at least one spare battery as well.

Expensive: DEWALT’s focus seems to be on the 40-volt range, and it is arguably the best option for all but commercial users. It’s unlikely you’ll find one under $400, and by the time you’ve got a decent battery, it will be closer to $500. It is in line with competitors of similar quality, but it’s still quite an investment. 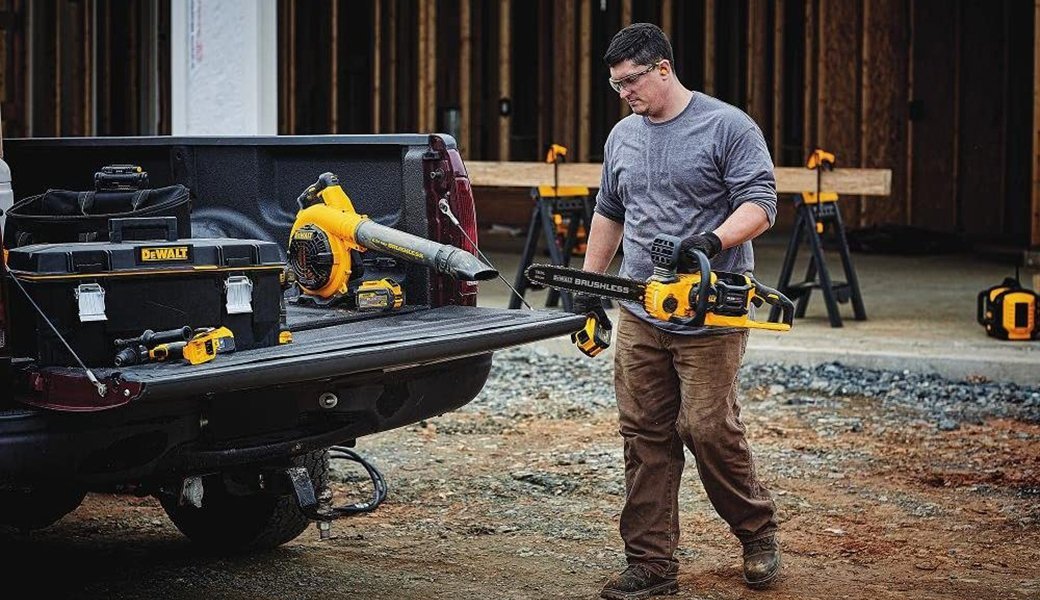 Tool-free chain tensioning on DEWALT chainsaws is quick and easy, but it isn’t automatic. It needs to be checked regularly. Have a quick look every time the battery needs changing or charging.

Q. Are brushless motors better than brush motors?
A.
In cordless tools, yes. Brush motors are cheap, but they were developed primarily for corded electric motors. They will work in cordless tools, but they aren’t anywhere near as efficient as brushless, which will run around 30% longer with the same battery. A cordless chainsaw is quite a power-hungry tool, so having a brushless motor is a major advantage. They’re also virtually maintenance free. In DEWALT’s chainsaw range, the XR designation tells you that they are fitted with brushless motors.

Q. Do I need to buy replacement chains from DEWALT?
A. No. As long as the size is the same (check carefully), it doesn’t matter what chains you buy, and you can probably save money sourcing them from another supplier. However, do make sure you buy a high-quality alternative. Buying cheap chainsaw blades is false economy. They stretch more quickly and need more frequent sharpening.

Q. Will DEWALT Max batteries work in XR chainsaws?
A. Yes, if the voltage is the same. We need to look at this question carefully, though, because there are a few alternatives: 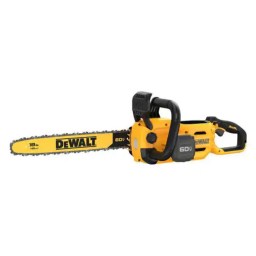