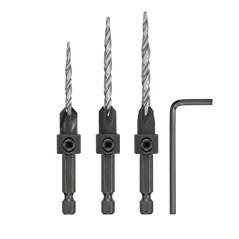 This economical countersink drill set is ideal for a whole range of professional and DIY applications.

Countersink drill bit set from a brand renowned for quality. Makes it easy to drill, countersink and counterbore in one action. Taper drill bits for faster, more secure fixing. Equipped with hex shank locking system to ensure drill bits stay in place during use.

Pilot bits are less durable than countersink – a common problem with all-in-one models. 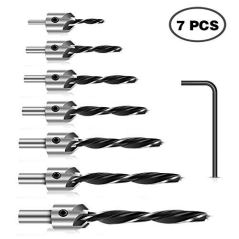 Not for use in metals. No depth stop. Some faults with hex screws not staying tight. 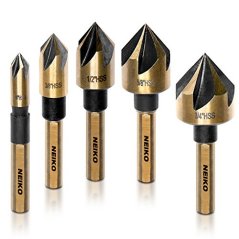 This countersink drill bit set works great for drilling into wood, metal, and other materials.

Constructed from M2 materials that guarantee the set can serve you well for lots of use. Drill bits are equipped with a 5-flute design to limit vibration when in use. Sold with a handy carrying case that makes it simple to take the drill bits with you on the go. 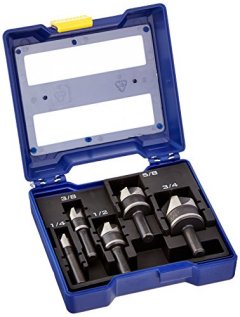 This countersink drill bit set provides a terrific choice for use with handheld and stationary drills.

High-speed steel construction guarantees the drill bits are built to last. Drill bits feature a black oxide finish that limits the risk of corrosion. Each drill bit boasts a 5-flute design that will help you drill smoothly time and time again. Offers a wonderful countersink drill bit set for professionals and do-it-yourselfers alike. 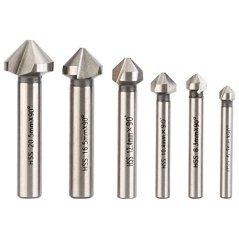 Drill bits tend to produce chatter and a poor finish when used with a hand drill.

When you're making something that's held together with screws, the finishing touch is usually to make the head of the screw flush with the surface – or hidden below it – using a countersink, or counterbore. It's a simple, efficient concept, but different materials require different drill bits. There are also a variety of solutions for different tasks. Of course you want your project to turn out beautifully, and you’ve come to the right place if you need help selecting the right countersink drill bit set.

When choosing a countersink drill bit set, you need to consider materials, drill bit type, flutes and shanks, and set contents. In this shopping guide, we delve into the nitty gritty of these features and take a look at functionality. We offer you some tips and suggestions on how to get the best job from your tools, and we provide answers to your most-asked questions, as well. Furthermore, we point you in the direction of some countersink drill bit sets that stand out from the crowd. 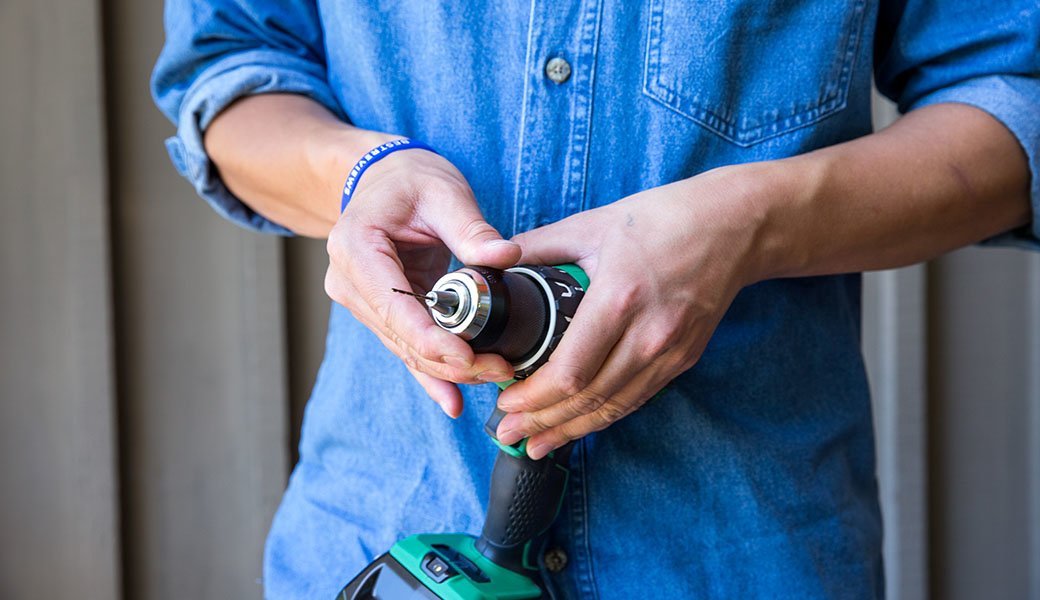 Gold countersink drills might have a titanium nitride coating for improved performance, but sometimes the color is just for show. Check the specification when ordering.

High-speed steel: The cheapest countersink drill bit sets contain bits made from standard high-speed steel (HSS). It's a proven material used for all kinds of cutting tools, and it forms the base for all types of countersink drill bits. It's excellent at cutting wood, as well as most plastics and composites. It can also cope with aluminum and other soft metals, but it struggles with steel and cast iron because it tends to overheat and dull quickly.

Standard: These countersinks have a cone-shaped tip and cutting flutes that extend down the sides. They are designed to countersink an existing drill hole. Variations on this type of countersink are available for drilling all materials.

All-in-one: These countersinks have a hole in the middle that accepts a smaller diameter (pilot) drill bit, and often a depth stop. They’re capable of drilling the initial hole and then countersinking or counterboring it. Because the pilot drill is usually HSS or black oxide, these are generally only used for drilling wood and other “soft” materials, not steel or cast iron. If the pilot drill bit has a point and spur on the end, it's designed for woodworking only.

Tapered: Some pilot drill bits are tapered, which it's claimed makes for faster, smoother drilling. It also provides a larger “grip” area for a tapered screw – which gives stronger fixing – as long as you accurately match diameter and depth to the size of screw you’re using.

Cross-hole: These countersinks don't have flutes but a single hole drilled through the head at a 45° dangle. Although called a “countersink,” these are actually used for deburring existing holes, usually in various types of sheet metal.

Flutes: The drill bits usually have three or five flutes. A countersink drill bit with three flutes cuts more aggressively. If it has five, it cuts with less vibration, and so makes it easier to get a smooth finish.

Shanks: These are round or hexagonal. Round shanks are common on countersinks used for hard metals because they're designed to fit machine chucks (though they fit other types, too.) Hexagonal shanks fit all kinds of drills and may also be of the quick-release type.

Did you know?
Many countersink drills for woodworking can also cut plastic and aluminum, but not hard metals like steel or cast iron.
STAFF
BestReviews

Sets contain between three and seven countersinks, giving you an enormous range to choose from.

All-in-one sets: These should also contain a hex key, which is used to adjust depth stops or replace worn pilot drills (the countersink part tends to last much longer). Sometimes two hex keys are provided, which is great because it’s easy to lose one!

Woodworking sets: These might also contain one or more plug cutters and perhaps a quick-release chuck adapter.

Storage: It's nice to have a box to store the set in. It's not just a neat and convenient way to keep the drill bits, but if your countersink drill bits are banging around against other things in your toolbox, the cutting edges could be damaged.

You’ll find that the cheapest countersink drill bit sets cost just a few bucks, but they usually blunt quickly, which leads to rough edges. In our opinion, there seems little point in trying to save a couple of dollars when you can get quality sets for a few dollars more.

Basic: Good, basic woodworking countersink drill bit sets cost between $15 and $20, and equivalent metalworking sets cost between $30 and $40. The main difference between countersink-only sets and those that offer pilot drill, countersink, and counterbore isn’t usually the price but the number of drill bits provided. You’ll usually get five or six countersinks but only two or three combination bits.

Premium: You might pay extra for titanium and black oxide coatings, though not a great deal. Precision cobalt countersink drill bit sets can cost over $100 and as high as $200. However, these are premium-quality, professional tools, so one of these sets is worth the investment if your work demands it.

Did you know?
A countersink isn’t just for making a recess. It is also the fastest way to deburr a hole in sheet metal or pipe work.
STAFF
BestReviews 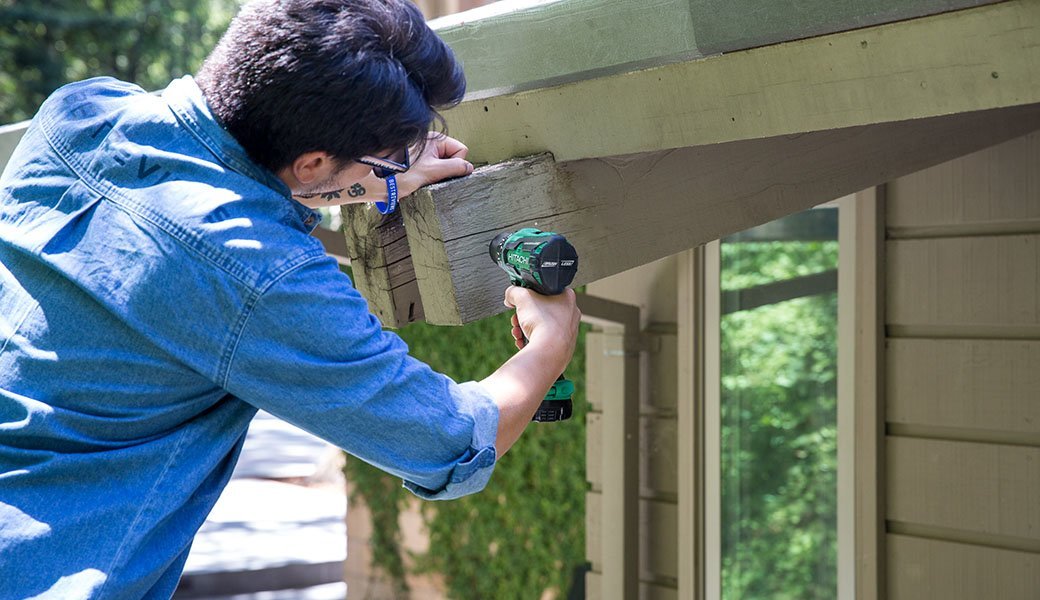 It’s possible to drill different depths of countersink with a single large bit, but it’s much easier to be accurate with the variety offered by a kit. It will save time, too.

Q. What’s the difference between a countersink and a counterbore?
A. A countersink is a shallow conical depression – deep enough so that when the screw is inserted, the head is flush or slightly below the surface. A counterbore is a smooth-sided hole the same diameter or larger than the screw head, with a countersink at the bottom. It allows a screw to be used in material that might otherwise be too thick. In woodworking, it can also be used to hide the screw head, either with filler or a wood plug cut to the same size as the counterbore and glued in place. Once sanded down and varnished or painted, the hole is just about invisible.

Q. How can I avoid countersink chatter?
A. Chatter causes a rough edge to the hole rather than a smooth one – in severe cases, almost hexagonal. A blunt countersink drill can cause it, as can the wrong drilling speed. However, the most common cause is bad alignment: the countersink drill isn’t following the same center as the initial pilot hole. It usually happens when you’re drilling by hand, so where possible use an all-in-one drill and countersink. If that’s not practical, try to use a drill press. Make sure the material is clamped or held in a drill vise so it can’t move. Drill the hole and follow immediately with the countersink. Another option is to drill the countersink first, then drill the main hole through the middle of the depression. It works, but the positioning of the countersink can be challenging. Without a pilot hole, they have a tendency to wander.

Q. Some countersink drill bit sets have numbers like #8 or #10. What do they mean?
A. These are gauge sizes, a system used to identify standard wire thicknesses that was first used in the UK in the 19th century. Britain now uses metric sizes, but numbers are still widely used in other countries. Most manufacturers also put the inch equivalent on the pack, though the sizes might not be what you expect. A #8 countersink is 11/64 inch – close to 1/4 inch, but not quite. For woodworking, the difference isn’t usually enough to be important, but if you’re looking for absolute precision in engineering, you need to be careful. 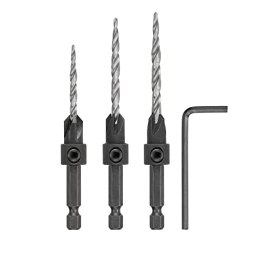 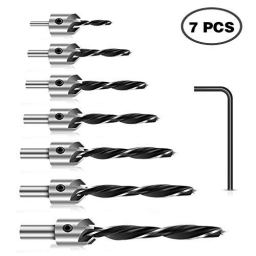 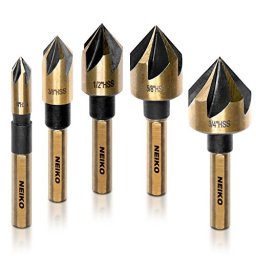 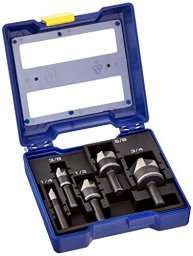 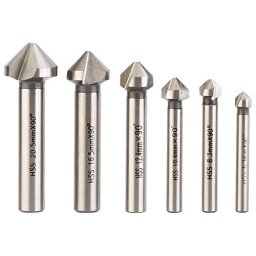