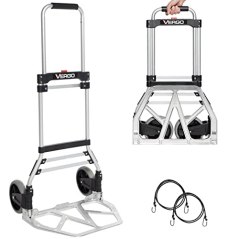 Relatively more expensive, but you are paying for quality and durability. 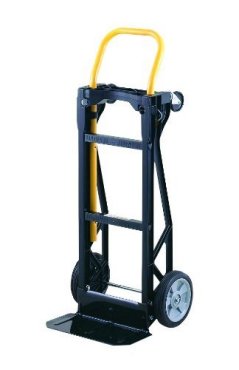 Lightweight nylon frame. Can be used vertically or as a load platform. Hefty weight limit. Comes with stair climbers.

Fragile handles. Rare incidents of folding mechanism breakage and problems with wheels have been noted. 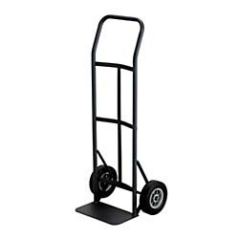 On the heavier side (20 pounds). Does not fold down for portability. 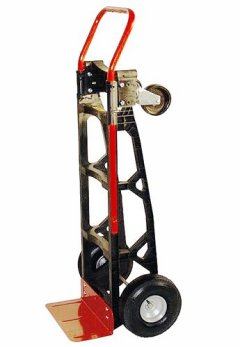 On the heavy side (23 pounds). Can carry 600 pounds. Pneumatic wheels. Has stair climbers.

Edges are sharp. Toe plate is small in relation to weight capacity.

Buying guide for Best dollies Types of dolly or hand truck What makes a good dolly? What should you pay for a good hand truck or dolly? Safety tips FAQ

When you've got boxes, sacks, heavy furniture, or who knows what to move from A to B, nothing makes the job quicker and easier than a good dolly, or hand truck. There's an enormous variety too, from folding models you can throw in the trunk, to sturdy platforms that will carry hundreds of pounds.

Which is the best dolly for you depends very much on the kind of work you expect from it. 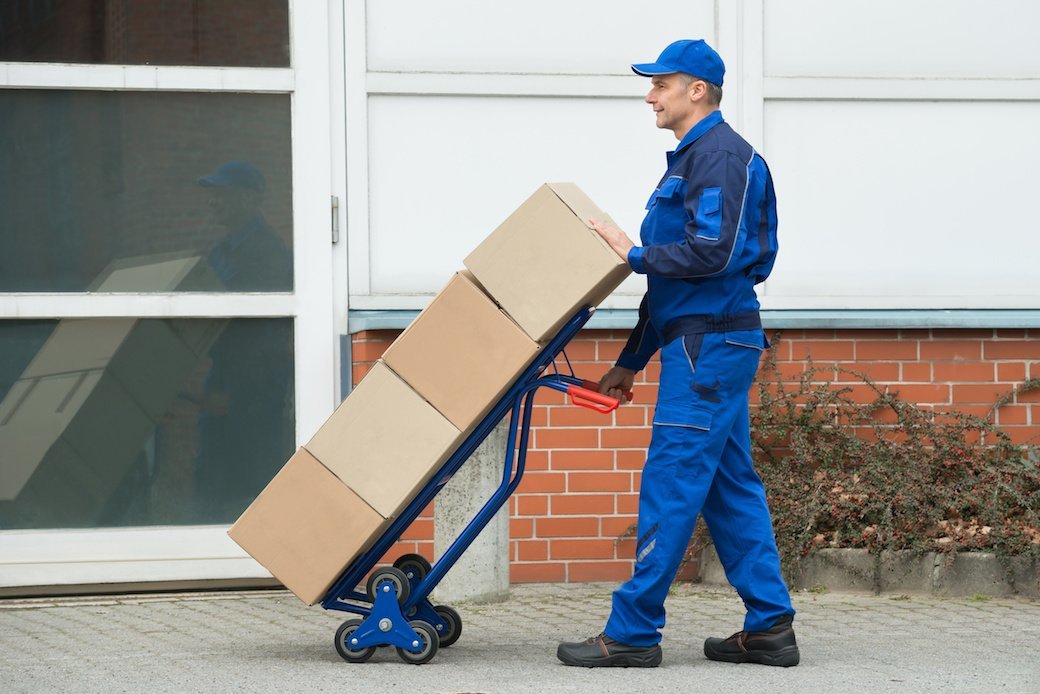 Nobody knows exactly when the dolly was invented, but they started to appear in the 1700s. Child labor was common, and the combination of the leverage provided by an

Types of dolly or hand truck

The basic concept of an upright dolly is simple: leverage gives you the ability to lift more than you could on your own, wheels make it easier to move. That idea has evolved, and we now have three configurations:

Let's look at each in turn, and talk about their strengths and weaknesses:

"A dolly might be capable of moving several hundred pounds, but it won't turn you into a superhero! Be sensible about what you're lifting."
STAFF
BestReviews

This is the model that seems to have been around forever. Basic upright dollies – often called hand trucks or sack trucks – are usually made from welded, tubular steel. Handles can be a continuation of the tube running around the top, can have an additional middle loop (called a "P" or "D" handle), or have a pair of handles with rubber grips. The second and third variants make it a little easier to tilt the dolly toward you initially.

Wheels are generally solid rubber, mounted to a plain axle. Ball bearings ensure the wheels run smoothly. A simple platform at the front (called a "toe plate" or "nose plate") carries the load.

Conclusion: Upright dollies are made for straightforward, fuss-free lifting. The design has changed little in several hundred years, because it does what it's supposed to. It also survives being thrown in a truck, dropped out of a truck, knocked over, dented, and scratched. The upright is the workhorse of the dolly world.

The main construction material of a folding dolly is usually aluminum alloy. The handle is invariably a continuation of the frame loop. Wheels are smaller than on traditional hand trucks, but still have solid rubber tires.

Conclusion: The folding dolly is very popular because of its versatility. You can throw it in the trunk, hang it on a hook in the garage — it will even fit in a cupboard. Heavy-duty versions will carry almost as much as a basic steel dolly, but they won't take the same beating. They're usually well made, but numerous joints and hinges means there's more potential for things to bend or break eventually.

A convertible dolly sounds like it ought to be the sporty version! In fact, these are dollies that can be used upright or quickly transformed into four-wheeled load platforms.

To save weight, most of the frame is usually made from plastic – often nylon polymer, reinforced with fiberglass. Handles are usually a steel loop, and sometimes telescopic. Toe plates are also steel, bolted to the frame. Main wheels are similar to those on traditional upright dollies, with solid rubber tires, though better ones have pneumatic tires. A second pair, up near the handles, are usually smaller, castor-type; solid plastic wheels without tires.

Conclusion: There's a limit to what you can stack on an upright dolly, regardless of weight. You can get much more on a horizontal load platform, and it's arguably more stable. The one drawback is the caster wheels. They don't roll as easily as rubber or pneumatic wheels (particularly under load), and they don't perform well on uneven ground, steps, or curbs.

Stair climbers aren't really a configuration – in terms of the way we've looked at dollies so far – because it's an addition to a dolly, rather than a different type. Upright, folding, and convertible models can all be stair climbers.

What turns them into a stair climber is an additional set of wheels. Instead of one, they have three or five, arranged around a hub. The layout is a lot like a fidget spinner. As you roll the stair climber against a curb or step, each wheel in turn takes the load, and continues to rotate. There isn't the usual stopping and starting, making the operation much smoother and much easier.

What makes a good dolly?

What you need it to do will have a major impact on which dolly you should choose, but we can make some useful generalizations.

Every day, all over the world, you'll see people loading and unloading trucks and vans using a basic upright dolly. If that person is you, then there's nothing simpler, more durable or more cost-effective. It will probably still be doing the job years after you've quit! 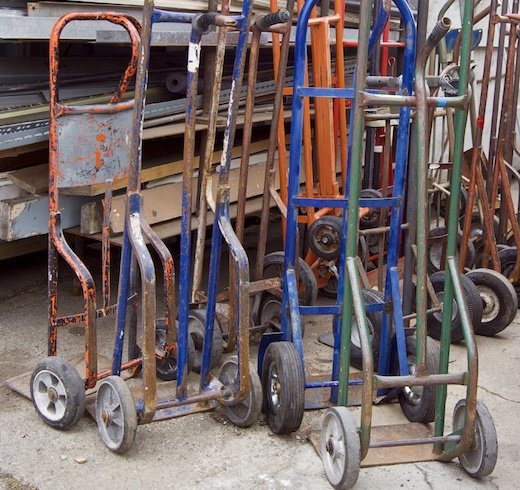 For your safety
Before each use, check your dolly for loose wheels or cracked joints. Never use it if it's damaged.
STAFF
BestReviews

If you're looking for a great all-rounder, a foldable dolly is the ultimate in convenience at home or in the workplace. It will handle the vast majority of lifting jobs. When you're done with it, you can store it in a cupboard, or the corner of a shed. If you need to take it from place to place, it will fit easily in the trunk of your car.

Convertible dollies are perhaps more likely to be found in a business environment. If you have a hobby where you end up moving all kinds of gear around, it could be a useful asset, but we think it offers best value where a wide variety of items needs to be moved. In that situation, the combination of functions will save you money. You only need buy one dolly or hand truck, not two.

If you frequently have to go up steps, consider a stair climber. If you've never tried one, you won't believe the difference it makes.

What should you pay for a good hand truck or dolly?

It's a great time to be shopping for a dolly or hand truck, because there's a wide selection available at very reasonable prices.

Normally we warn people away from cheap products, but that's not the case here. As long as you have reasonable expectations of the weight capacity, you can get a very good folding dolly or basic upright hand truck for between $30 and $60.

If you want pneumatic tires, greater weight capacities, and the ability to convert from upright truck to horizontal platform, you will of course pay more – but even the very best, with all the features most people ever need, can be yours for little more than $100.

Dollies with stair climbers tend to be at the upper end of that price range, and professional models range from $250 to $800. Expensive, but they are extremely strong.

You can find stair climber kits for around $30 to $40, but we don't recommend them. They are a bolt-on addition, not an integral part of the design, and they rely on manual leverage, rather than providing additional wheels. 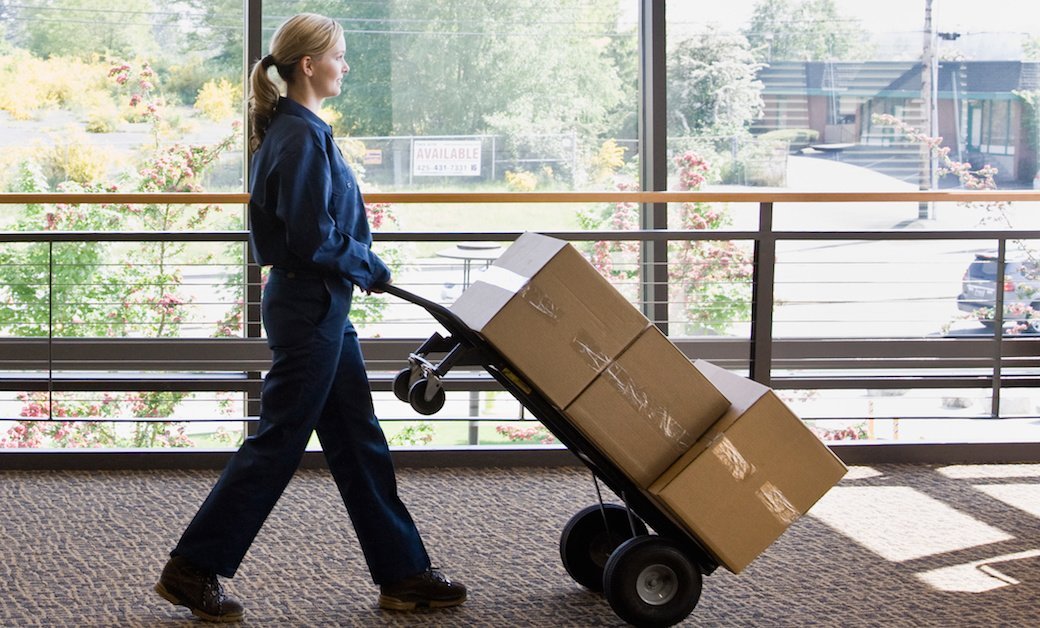 Be careful of the size of box you put on a two-wheeled dolly. The toe plate should extend at least two-thirds of the distance, front to back, otherwise, it will tip forward as you lift it.

Q: Is there a difference between a dolly and a hand truck?

A: It depend on who you talk to! We heard from logistics professionals who say a dolly has two axles and four wheels – a rolling platform – but some people call them platform trucks. Upright, two-wheeled, single-axle models are often called a hand truck, or a hand truck dolly. So are versions that convert between upright and horizontal.

The best answer we can give is that it doesn't matter what it's called, as long as it does the job you need it to do!

"When using a dolly horizontally, make sure the load is distributed as evenly as possible to avoid tipping. With light items, don't stack so high that your vision is obscured."
STAFF
BestReviews

Q: Which is better, pushing a dolly or pulling it?

A: Whenever possible, push, don't pull. You need to see where you're going. Hazards can appear unexpectedly and you're going to hurt yourself if you don't spot them. If you're pushing, the load is always moving away from you, so you're in little danger of it falling on you, or trapping you, if you lose control. The only time to pull is curbs or steps, but do so gently, so you don't jar your back.

Q: Should I choose a dolly with a steel frame or plastic?

A: Historically, steel frames have been considered stronger, but prone to rust. Plastic frames were lighter, but perhaps not as durable. However, the use of epoxy resin coatings on metals now keeps rust at bay for much longer. Fiberglass-reinforced nylon polymers make “plastic” dollies very tough. What's more, many steel dollies have plastic components, and nylon models almost invariably have a steel handle and toe-plate. How a dolly is constructed, its weight, capacity and flexibility, should have greater bearing on your choice than the actual materials used. 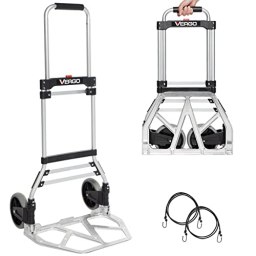 Best of the Best
Vergo
Industrial Folding Dolly
Bottom Line
Sturdy, easy to use, and portable. The best hand truck on the market today.
Shop Now 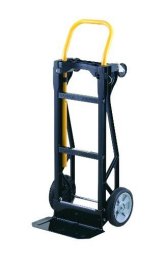 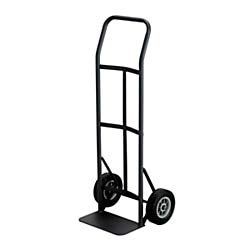 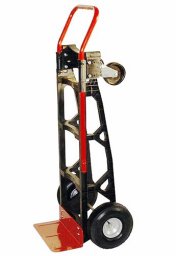