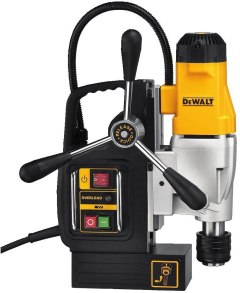 With multiple user-friendly features, this model is a heavy-duty tool capable of tackling most tough jobs.

Reliable operation. Heavy-duty with a strong magnet for bigger projects. Drills precise holes from various types of angles and distances. Price is impressive for its class.

Some users find the Quick Change ineffective and make a "loose" fit. 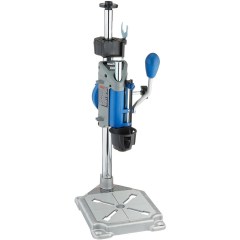 A fine addition to your Dremel collection, this reliable model is ideal for artisans and light projects, according to our DIY expert.

Contains multiple parts that can be difficult to properly assemble. 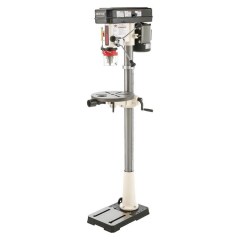 Our DIY expert approves of this high quality drill press that stands directly on the floor in order to perform a variety of applications.

Oscillating spindle for quick and efficient work. Heavy weight stands sturdily for larger projects. Can tilt table and adjust height. Offers capabilities such as drilling and sanding without extra tools.

Some users report that height adjustment is somewhat limited. 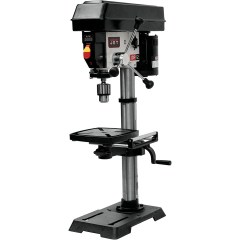 With an accurate drill and comfortable handling, our DIY expert calls this the ultimate professional drill press.

X-shaped laser beam to pinpoint where you want to drill. LED light provides further visibility. Knobs and switches have been designed to fit in hands comfortably. Extend roller for support.

Users report that the belt is tight, so strong hands are required for adjustments. 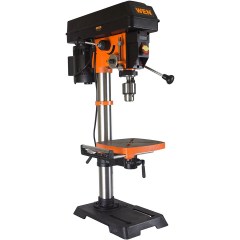 From a reliable brand, this professional quality drill press offers all the features a skilled woodworker could want.

A small number of users reported receiving machines with a defective part.

Handheld drills are extremely versatile tools, but they have their limits. When you need to use different types of drill bits, in a wide variety of materials, you can't beat the power, precision, and repeatability of a drill press.

Drill presses (sometimes called pillar drills) come in all shapes and sizes. It's great to have plenty of choices, but the variety does complicate the selection process. Do you need a benchtop or floor-standing model? What kind of motor power? How many gears? What about quill travel?

Drill press bases have slots for bolting them to a bench, or the floor,but people seldom use them. You should. It's safer (prevents the drill from tipping if you have a large workpiece), and cuts vibration, thus improving accuracy.

The basic components of a drill press are relatively simple. An electric motor is attached to a gearbox, composed of two sets of stepped pulleys. The number of steps defines the number of speeds available. A v-belt runs between the pulleys, transferring power to a rotating spindle, called a quill. A drill chuck is fitted to this quill. The chuck is raised or lowered using a handle on the side.

This whole head assembly — the drill head — is supported at the top of a steel column. Column height varies, given either a floor-standing drill press or one designed for benchtop use. A large base (or foot), usually made of cast iron, provides stability.

Running up the side of the column is a gear rack. A table (also cast iron) is clamped to it. A pinion gear and winding handle on the table allow for the table to be raised or lowered.

What makes each drill different is the quality of these components, the various sizes available, and the extra features each manufacturer offers.

Expert tip
Be sure to read the volts required for this type of machinery and buy appropriately. You do not want to face tripped circuits or shorts when using it.
Beth Allen
BestReviews Home Improvement and DIY Expert

You might think that horsepower would be a major factor in deciding the best — or at least the most powerful — drill press. In fact, many manufacturers don't even mention it. It's just not that important. A motor between ⅓ hp and ¾ hp is sufficient to drive all but the biggest machinery. A 1 hp drill press would be considered a real monster!

What's more interesting is the number of gears available, and thus, the speed range. This is critical because, for best results, you should vary the speed depending on drill size and the material being drilled.

For example, to drill a 3/8" hole in a piece of maple, using a twist drill, 1,500 rpm is the optimum speed. In pine, that speed should be 3,000 rpm, and in acrylic, it should be 2,000 rpm. Useful drilling speed charts are readily available online.

Even the most basic drill presses offer five gears, with a speed range of approximately 700 to  3,000 rpm. High-end models offer up to sixteen. The range is extended at the lower end (starting from around 150 rpm) and obviously has more increments, but the top speed is unlikely to be much over 3,000 rpm. Higher speeds just aren’t necessary.

Most drill press tables are quite small; between six square inches and eight square inches is typical. For many jobs, these sizes are perfectly adequate. However, drilling long workpieces can be awkward.

Many people build additional tables to clamp on to the original. A few manufacturers offer bigger tables as standard. These are particularly convenient for woodworkers.

Drill press tables can be tilted to left and right, by 45 degrees in each direction, to allow for drilling holes at an angle. Some can also be tilted forward — allowing you to produce compound angles — though this isn't common.

Something that's often overlooked when people shop for a drill press is quill travel or quill stroke. This is the distance the chuck travels up and down.

It's actually a very important number because it defines how deep a hole you can drill. To look at it another way, quill travel is the maximum thickness of material that you can drill a hole through.

Entry-level models will have quill travel of two inches or so. Professional-grade tools could be six inches or more.

Eight to ten inches are common sizes for a basic, benchtop model. At the other end of the scale, very few drill presses exceed 24 inches.

The other factor impacting the size of the workpiece you can drill is the height available under the chuck. Bear in mind, you can swing the table out of the way, or even remove it entirely if you need to. Floor-standing models clearly have a much greater height capacity than benchtop models.

Unlike modern cordless hand drills, drill presses do not have keyless chucks. The advantage of a keyed chuck is simple — you can tighten it more than you can by hand alone. This is important because of the forces a drill press can generate. You don't want the chuck coming undone, or the drill bit turning in the chuck instead of the material.

A 1/2" shank will accept the vast majority of drill bits used in garages and home workshops, but some pro tools — such as mortising chisels — have a 5/8" shank. It's a good idea to check the range of drilling bits you intend to use before deciding on a drill press. 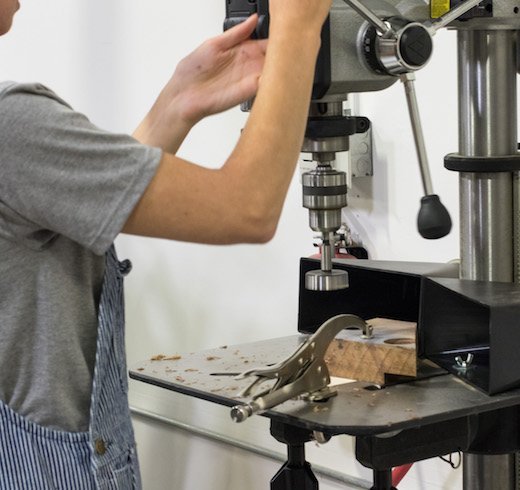 Expert Tip
Never attempt to adjust settings or change bits while the machine is running. This is dangerous to the user and can damage your project.
Beth Allen
BestReviews Home Improvement and DIY Expert

Modern drill presses offer a variety of features, so you need to look at each package as a whole. However, the following are valuable additions to a basic machine.

If you look hard enough, you can find a cheap, 8", 5-speed, benchtop drill press, from a brand you never heard of, for around $50. We advise against it. Usually, castings are inferior, the table may not be flat, and durability will be suspect.

For around $75, you can get a drill that size from a reputable maker. These drill presses should provide years of trouble-free service.

Radial drill presses start around $300 for a basic machine with five speeds, and expect to pay $500 and higher for a floor-standing model.

Floor-standing drill presses tend to have larger capacities and more powerful motors. Prices start around $600 for a 15" model with a 3/4 hp motor, but it's not difficult to spend $1,000 or more for a really good quality, fully-featured machine. That may seem expensive, but we're talking about something that will handle an enormous range of drilling tasks, and ought to last a lifetime.

Expert tip
A drill press runs at high speeds. It is imperative that users do not have long hair, loose clothing, or dangling jewelry that could become engaged in the drill and cause serious injury.
Beth Allen
BestReviews Home Improvement and DIY Expert

A really useful accessory for woodworkers is a sanding drum, allowing you to turn your drill press into a fast and efficient sanding station. 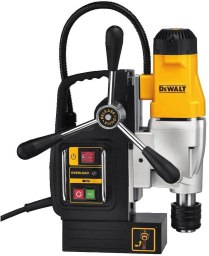 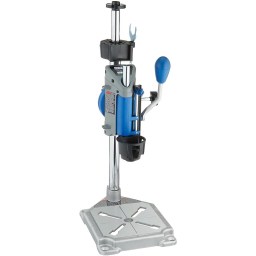 Best Bang for the Buck
Dremel
Mini Portable Drill Press
Bottom Line
A fine addition to your Dremel collection, this reliable model is ideal for artisans and light projects, according to our DIY expert.
Shop Now 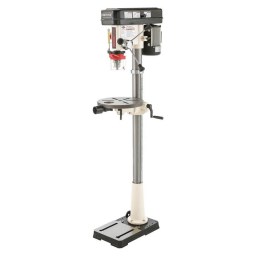 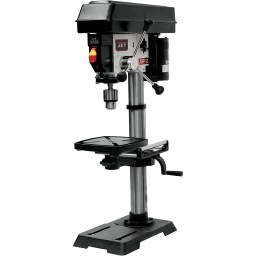 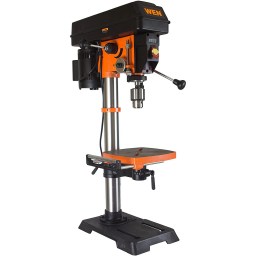 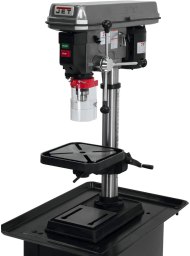 Top Pick
JET
3/4-HP, 15-Inch
Bottom Line
Buy the JET at the outset, and you're done. It will even handle tough jobs like morticing, given the right attachment.
Shop Now 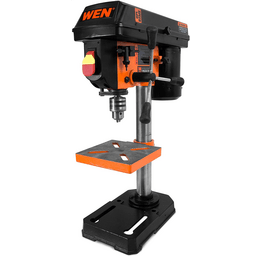