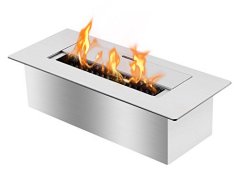 The best overall ethanol fireplace that is the perfect size for outdoor gathering spaces.

Large square footprint will fit in a variety of outdoor spaces without taking up much room. The optional grate adds more visual flair and an extra layer of protection. Eco-friendly and easy to maintain.

Snuffer doors discolor from the flame over time. 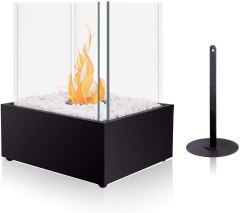 This is a smart looking tabletop fireplace that will enhance the decor of any environment.

Portable and ventless, making it ideal for any location. Sizable, windproof, and safe. Purchase includes both decorative stones and snuffer. Flame is 8 inches high.

Individuals find the unit requires a little finessing to build, but works fine after assembly. 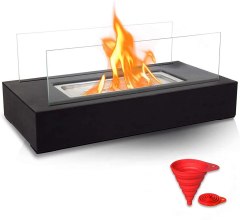 An elegantly designed tabletop fireplace that is safe for both indoor and outdoor use. 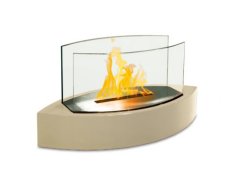 Contemporary elegance makes for an eye-catching feature in any location.

This combination of lustrous beige paint, stainless steel, and tempered glass works for modern décor inside and out. Easy to use. Runs for around 90 minutes per fill. 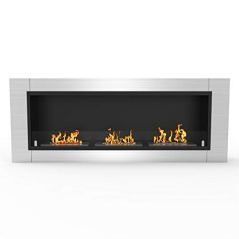 Although large, it’s still relatively easy to install. Flames reach 12 inches or more in height, and the fireplace runs 4 to 6 hours per fill. Output is 18,000 Btu.

A considerable investment. No installation instructions.

Ethanol fireplaces (also known as bioethanol fireplaces) are becoming increasingly popular. One of the main reasons is the many benefits this type of heating offers, from portability to design to safety.

Bioethanol is a plant-based fuel, so it’s far more environmentally friendly than fossil fuels. In fact, in many cases it’s carbon neutral. With no petrochemicals or other fossil fuel derivatives, it also burns without toxic fumes or ash. All it gives off is water vapor and a small amount of carbon dioxide. That means there’s no need for a flue, chimney, or another form of ventilation to make it safe. These fireplaces don’t need electrical connections either. Many are easily portable and can be used indoors or out. The wide variety of sizes and designs also adds to the appeal. There’s something for every home and style of décor. 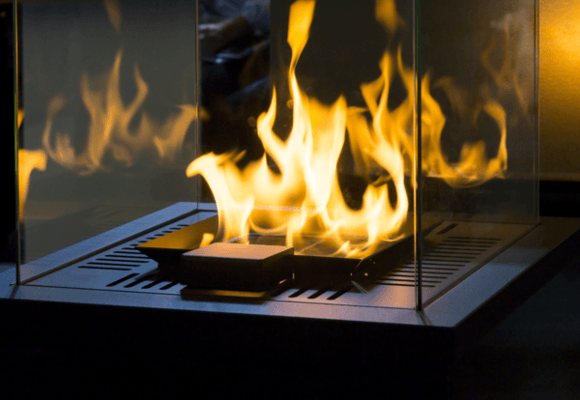 Ethanol is a flammable liquid, so containers should be handled with care and stored in a safe place. Try to avoid spills, and be careful not to overfill your fireplace.

The ethanol fireplaces are actually quite a simple idea. A fuel reservoir (a steel tank concealed in the base) contains ethanol to about two-thirds full. The tank is packed with either ceramic or fiberglass wool that acts as a wick. This absorbs most of the fuel, thus helping to prevent spillage if the fireplace is moved, but its main job is to slow down evaporation so the flame lasts longer. Neither ceramic nor fiberglass actually burns, so it shouldn’t need replacing, though it may discolor slightly over time. Some manufacturers claim that fiberglass wool offers a longer burn time than comparable ceramic wool models, though in practical terms the difference seems minimal. The fireplace can be lit with a match, but we prefer a safer option and suggest a longer lighter.

Design is a very personal thing, and ethanol fireplace manufacturers offer something for just about every room size and home style. Probably the biggest single feature that attracts people to an ethanol fireplace is having a real flame. There’s something about it that appeals to us way beyond the warmth it provides.

Regardless of which one you like, there are a few things to take into account, including panel configuration, size, and burn time. There should be no problem finding an appropriate model, but it’s absolutely vital that you investigate what each fireplace is designed for. Simply fitting a standard model into a recess, for example, could lead to disaster.

Panels: To protect people from accidental burns, the flame is usually shielded by glass panels. The size and style of these panels vary enormously. On square and rectangular fireplaces, they’re usually on the front and back. Round fireplaces have a glass cylinder. That still leaves the top of the fireplace open, but you might want to mount the fireplace on the wall or in a recess or put something like a flat-screen TV over it.

Regardless of the size and shape, the panels should be either tempered or toughened glass. Not only is this much more resistant to knocks, but in the event that it does break, it either holds together (if laminated) or shatters into small, harmless lumps rather than dangerous, jagged shards.

Indoor/outdoor: Many ethanol fireplaces are designed to be used indoors and outdoors. The flame can be quite resilient in breezy conditions. The design of the glass panels also has an impact, with some models offering improved wind protection.

Size: Ethanol fireplaces come in a huge range of sizes from easily portable tabletop models to those approaching 6 feet long. There are also cocoon models that descend on a long rod fitted to the ceiling. It’s important to check the physical dimensions before ordering because online photographs can be misleading.

While large models will almost invariably burn longer than small ones, physical size is a poor indicator of how long the fireplace will stay lit. You need to check, and it’s best to assume that the manufacturer’s figures are a little optimistic. Small tabletop models might only last for 30 minutes. At the other end of the scale, high-end models might run for several hours or more.

Also bear in mind the quantity of bioethanol you’ll need. The second example we just mentioned requires 15 liters (about 4 gallons) to fill. Bioethanol isn’t the cheapest fuel, so those costs must also be factored in.

Bioethanol fuel is not as widely available as many would like, though it’s becoming more popular. In some areas, it can be found in local hardware stores, and most major retailers stock it. If that’s not convenient, you should have no problem getting supplies from online sources.

Some owners of ethanol fireplaces use denatured alcohol (alcohol that is unfit for human consumption) because it’s usually cheaper. However, the composition of this product varies. It may contain ketones, which have raised some health concerns, and/or naphtha, which is a hydrocarbon derivative from oil and gas production and so not very environmentally friendly. The fumes are unlikely to be dangerous, but they might be unpleasant in a confined space. Our advice would be to stick with bioethanol as the fireplace manufacturer intended. 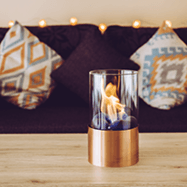 DID YOU KNOW?
Hazardous gases like carbon monoxide are only released at temperatures over 1,300°F. Ethanol fireplaces burn at about 750°F.
STAFF
BestReviews

Fire lighter: VEHHE Candle Lighter
Keep your hands at a safe distance from naked flames with this versatile long-neck lighter. The windproof design uses an electrical spark for flawless performance, and it’s recharged via any convenient USB port. A battery indicator tells you when it’s getting low, though you should get a hundred or more uses per charge.

Other types of gas fire can produce more heat than ethanol but need to have a flue or venting to be used safely indoors, so much of that heat is lost. With an ethanol fireplace, all the heat stays in the room.

Inexpensive: The cheapest ethanol fireplaces are small tabletop models used as accent pieces rather than heat sources. These start at $40 to $50. If you extend your budget to $100, you can find a much wider choice.

Mid-range: Between $100 and $400 you can find high-quality tabletop models, freestanding ethanol fireplaces, and wall-mounted units. A lot of people looking for a statement piece for a room and good additional warmth can find what they’re looking for in this bracket.

Expensive: Large wall-mounted units and freestanding models can easily top $500 and some exceed $1,000. These are intended not just as decorative features but also to produce considerable heat. You’ll pay the most for hanging designs, which run anywhere from $2,500 to $7,000. 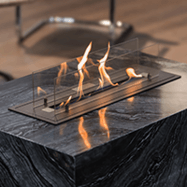 DID YOU KNOW?
Bioethanol is an environmentally friendly form of alcohol produced from potatoes, beets, and corn, and it’s carbon-neutral when it’s made from food waste that would otherwise go to landfills.
STAFF
BestReviews

As we’ve seen, bioethanol fireplaces can be used just about anywhere, either as a portable unit or a permanent installation. However, that doesn’t mean you should just use any size fireplace in any size room. A real flame needs oxygen to burn. If the room is too small, the fireplace will be starved of oxygen and the combustion will be poor, reducing the heat output. It can also make the room stuffy and uncomfortable for you.

There is a recommended maximum size — the amount of heat output — for a given space. Some manufacturers make this easy by telling you, for example, that their fireplace is suited to a room of 300 square feet, but most do not. Fortunately, it’s easy to work out. 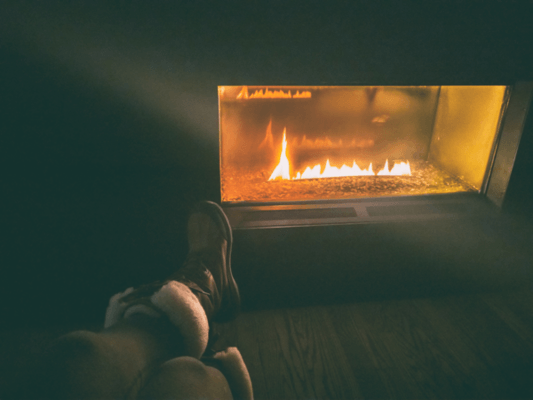 Glass panels help protect people and pets from the real flame in an ethanol fireplace, but the glass itself can get very hot, so you should avoid touching it.

A. Absolutely. Unlike burning propane and butane, burning ethanol doesn’t give off hazardous carbon monoxide, just water vapor and a negligible amount of carbon dioxide. Other chemicals may be emitted, but none in amounts that can cause harm to either people or pets. There are two notes of caution: First, fuel is very important. Only burn bioethanol from a trusted source. Second, it’s recommended that flammable materials be kept at least 3 feet away from the fireplace.

Q. Will a wall-mounted ethanol fireplace heat my room?

A. That’s a difficult question to answer because there are so many variables. Ethanol fireplaces are more efficient than many alternatives because heat isn’t lost through a flue or chimney. That said, ethanol doesn’t burn as hot as propane or wood. Some models give the square footage they’ll heat, and many buyers are very happy with the heat produced. If you live in a cold part of the country, it’s probably best to look at an ethanol fireplace as an attractive source of supplemental warmth rather than the sole source of warmth unless you buy one of the larger models and have a budget of a couple of thousand dollars.

Q. Are there any regulations covering the use of ethanol fireplaces?

A. At the time of writing, there are not. As far as United States fire regulations are concerned, alcohol-burning fires are categorized the same as ordinary candles. However, given that ethanol fireplaces have a naked flame (regardless of how it’s shielded) the National Fire Protection Agency (NFPA) and the U.S. Fire Administration suggest they be treated with the same caution as a regular, open wood-burning fireplace. 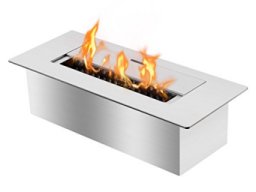 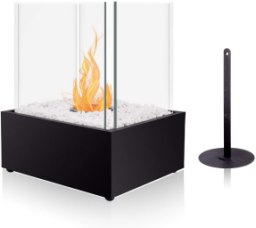 Best Bang for the Buck
BRIAN & DANY
Ventless Cube XL Tabletop Fireplace
Bottom Line
This is a smart looking tabletop fireplace that will enhance the decor of any environment.
Shop Now 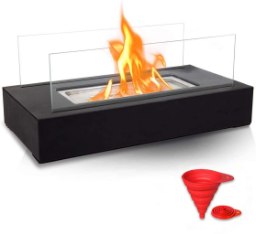 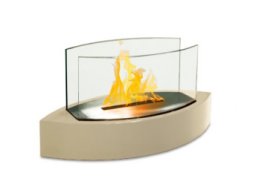 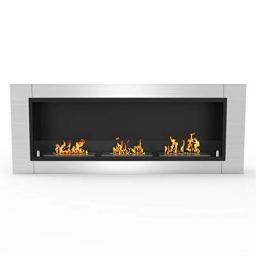 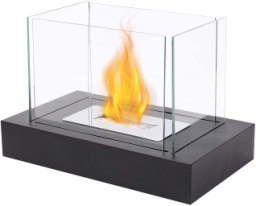 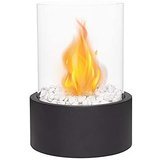 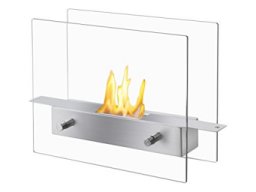 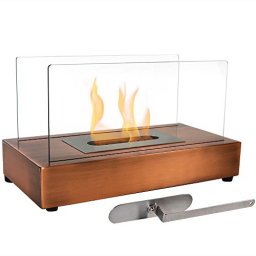 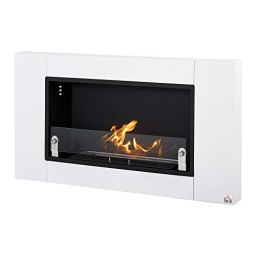