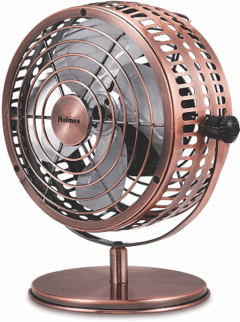 With all the necessary components of a well-functioning fan, this model has a unique vintage finish that looks great on any desk.

A handful of users reported that the fan made a rattling noise after some months. 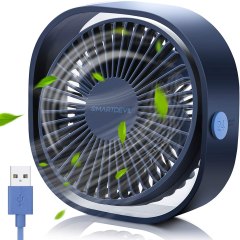 The smooth construction and selection of adjustable settings make this device easy to control on any surface.

Lightweight and compact structure can blend into any location. Rubber base prevents damages from slipping or vibrations. Customizable settings through 3 fan modes and full rotation. Available in navy blue, cherry pink, and natural white.

Medium and high modes can be loud. 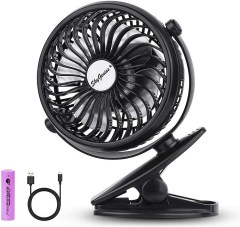 Durable and highly adjustable, this clip fan can run on USB power or use a rechargeable battery for maximum flexibility.

This 7.5-inch-tall fan runs on USB or rechargeable battery for transportability. Speed dial adjusts airflow to maximum of 10.5 feet per second. Offers 360° rotation, both vertical and horizontal. Clips anywhere you need it. Sturdy clip and durable if dropped.

Some report the fan's power suffers when the USB is plugged in, and the rechargeable battery doesn't last long. 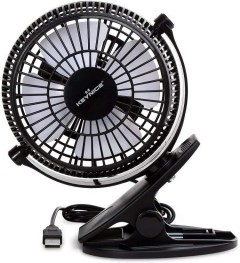 This model is a well-built and an efficient fan with a versatile clip mount.

The fan is available in a variety of colors. It uses little power while also running quietly. Features a 6-inch frame. Strong clip is useful for mounting the fan virtually anywhere. It has a solid construction and offers 360° rotation.

Some feel this model doesn't blow enough air. Reports of fan shorting out after a couple months; some arrived with missing parts. 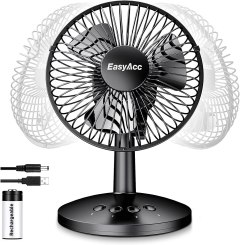 While a bit pricey, this option stands out for its oscillation feature and draws praise for its strong airflow.

Features three speeds with airflow rates of 1,700 to 2,500 revolutions per minute. Lightweight and quiet. Oscillates from side to side, covering a 60° angle. Built-in battery can hold a charge for 6 to 16 hours, depending on your chosen speed.

This fan costs a bit more than other options, and some find it to be smaller than expected.

If you want a fan but don’t really want a large one, a USB fan might be exactly what you need. Great for the office, car, or anywhere else you want to create a cooling breeze, USB fans offer an inexpensive way to work, relax, and sleep in comfort during the heat of summer.

When shopping for a USB fan, you’ll find numerous models of various sizes and with different features from airflow controls to mounting methods to materials. Some of these fans also have a battery-powered option, so you can easily take your compact USB fan on trips, camping, or anywhere else where power isn’t readily available.

Our buying guide looks at everything you need to know to pick up the right USB fan for your needs. In addition to explaining what you can expect to find at various price points, we also offer a few of our favorites. 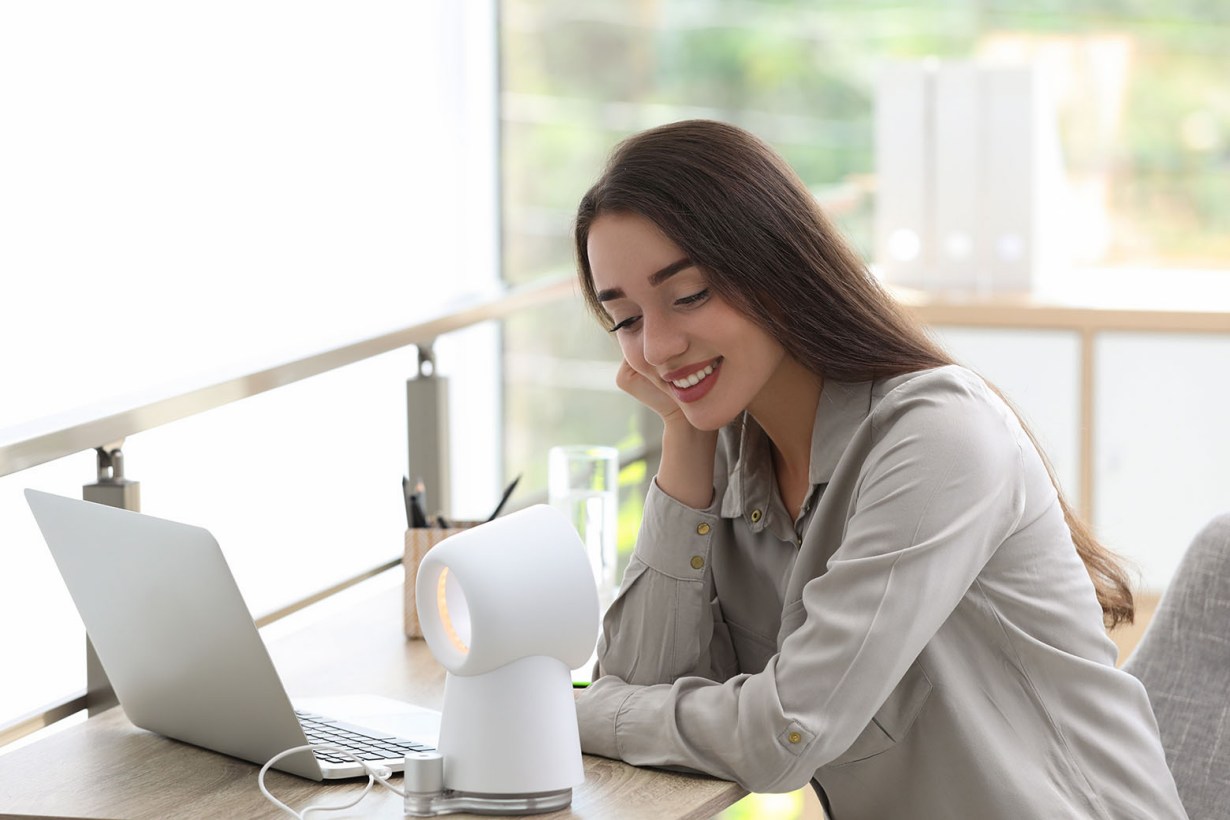 A USB fan can be particularly helpful for anyone who has allergies and can’t keep a window open to improve airflow.

Typical box fans, tower fans, or floor fans can take up a fair amount of space, but USB fans are much more compact. USB fans range in size, typically from around 3 inches to around 10 inches in diameter. Many retailers offer several different sizes of fan to choose from.

Larger fans can generate more airflow. The downside is that a larger USB fan takes up more space, which can be an issue if you’re using it on a desktop, and it usually costs more than smaller fans.

Compact USB fans appeal to users in search of a fan with a smaller footprint or one that can be easily slipped into a tote, backpack, or suitcase. The downside is that smaller USB fans have less power and airflow.

Like other types of fans, most USB fans have a couple of ways to control the airflow: tilt/rotation and oscillation.

Tilt/rotation: Most USB fans have a way to tilt or rotate the fan housing so you can set the direction of the airflow. While some offer minimal control, allowing you to move the fan only 90° or less, others provide a full 360° of rotation.

Oscillation: The fan housing automatically moving from side to side is less common in USB fans than in traditional fans. While you might need to search to find a USB fan with this feature, it can help if you want to cool a wider area more quickly.

Unlike larger fans, USB fans don’t create a lot of noise. Most generate a low hum like white noise, but some larger fans and those that operate at higher revolutions per minute (rpm) can be a bit louder. Generally speaking, the sound level is fairly low. See the FAQ section for more on what to do if a USB fan makes a lot of noise.

Yes, these fans all run via USB, so they can be powered by laptops, power banks, and USB wall and auto adapters, and other devices that have a USB port. Some USB fans also have a battery option, which increases their usefulness in terms of taking the fan with you while traveling or camping.

While some USB fans with a battery option use disposable batteries, most use rechargeable batteries that allow you to run the fan for 3 to 24 or more hours depending on the fan and the speed at which it’s operating. When buying a USB fan with a battery option, be sure to note not only how long the fan runs on a charge but also how long it takes to recharge between uses.

USB fans vary by size, material, and how the fan sits on or mounts to your desk. USB fans are available in many colors, with some retailers offering you a choice of color when you order. These fans work best when they’re in close proximity to you, and you probably aren’t going to want to stare at an ugly fan all day. Choose a USB fan that does the job and you like.

While uncommon, some USB battery-operated fans also contain USB ports, so they can be used to recharge smartphones and other devices.

Most USB fans are made of plastic. While plastic fans are lightweight and portable, they are also less durable than metal fans. If you want a USB fan that is a bit more rugged, consider choosing one made primarily of stainless steel or aluminum. A metal USB fan might be more difficult to find (and more expensive), but it will last longer and probably have a more stylish appearance than most plastic fans.

On/off: You won’t find a lot of controls beyond an on/off switch on most USB fans. On/off settings are usually controlled by a knob or switch, although some USB fans have touch-sensitive controls: you simply touch the base of the fan to turn it on or off.

Those fans that don’t have an on/off switch are controlled by plugging and unplugging, but this can be a nuisance if the USB port is hard to reach.

Speed: Controls for speed are the only other feature that you’ll consistently find on USB fans. These allow you to set the airflow of the fan as measured in revolutions per minute. These controls generally have from two to four speeds that range from 500 rpm to 2,200 rpm or more depending on the fan.

USB fans typically employ one of two methods to sit on or attach to your desk or another surface: a base or a clip mount.

Base: You can set a USB fan with a base on a table, desk, or another surface. The base might include rubber feet or strips to keep the fan from moving or slipping and protect the surface. If you have limited desk space, this might not be the best option.

Clip mount: With a clip mount, you can clip the fan to the edge of a table or desk or raise it higher and attach it to a shelf or other structure. If you choose a fan with a clip mount, be sure the clip is sturdy enough to hold the USB fan securely.

While uncommon, some USB fans include built-in LED lights, so you can more easily use the fan at night. This is also a valuable feature if you need a nightlight or an emergency light. 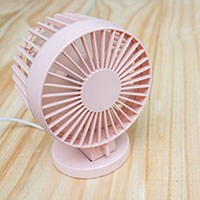 DID YOU KNOW?
The first desktop fan was an electric battery-powered two-blade fan (with no safety housing) invented by Dr. Schuyler Wheeler in 1822.
STAFF
BestReviews

USB fans in the $5 to $10 range are typically more compact (3 to 4 inches) and less adjustable than fans that cost more. Fans in this range have fewer speeds and produce less airflow. Most of these fans have a base.

In the $10 to $20 range, the fan size increases to 4 to 8 inches. These USB fans can either have a base or clip mount and usually offer more speeds (three is average). Advanced features like rechargeable batteries and some LED lights can also be found in this range.

At the highest price points of $20 to $30 and more, you can expect to find the most durable and largest USB fans (8 to 10 inches). These fans tend to have clip mounts, rechargeable batteries, the greatest airflow, and the most fan speeds. Also more common here are 360° rotation and oscillation.

One plus of a USB fan clip mount is that it’s an easy way to attach your fan high out of reach of little fingers or paws. 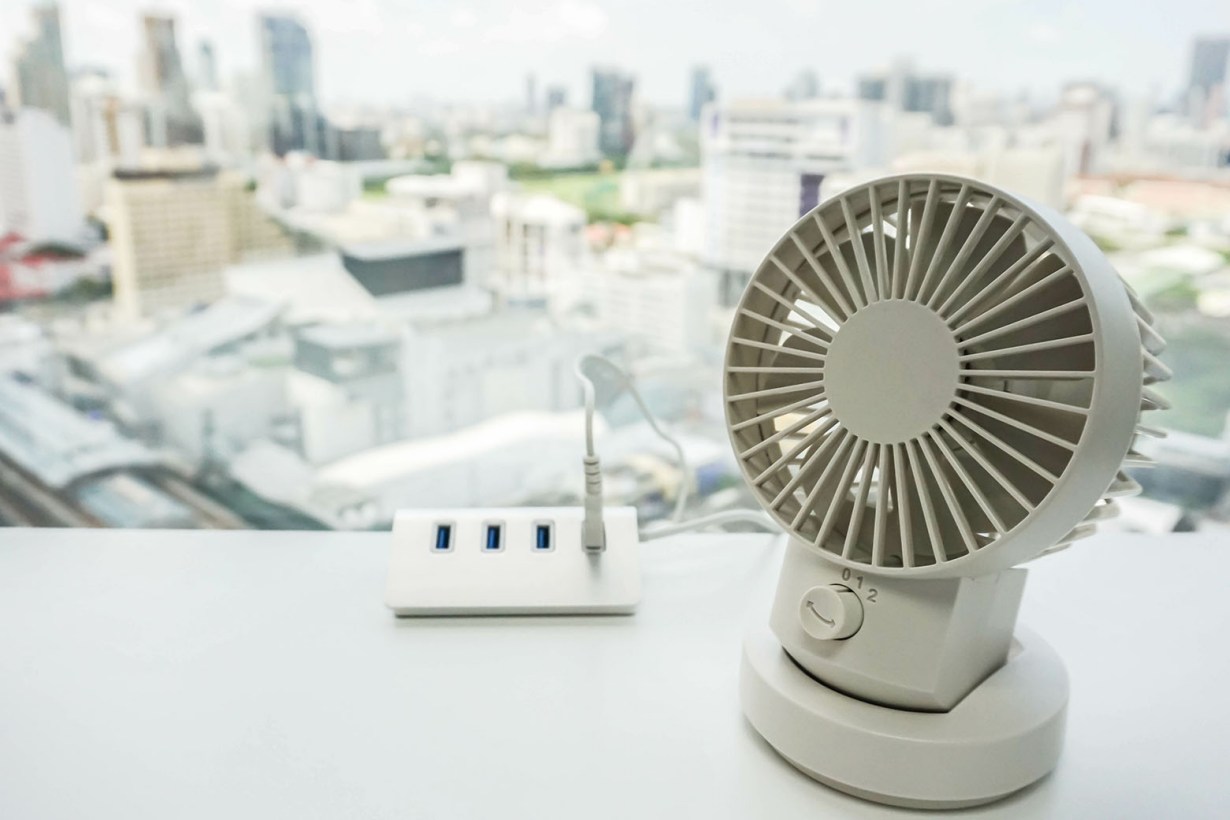 Most of these fans are compact and perfect for travel, and those that include a handle are even more portable.

Q. Can these fans be cleaned?

A. Fans can accumulate a fair amount of dirt, dust, and hair, both on the housing and on the blades. This buildup can affect the performance of the fan and cut down on its airflow over time.

Most USB fans are easily opened for cleaning, usually by opening clips or screws. First, be sure that the fan is off and unplugged. Remove the housing. Gently wipe down the housing and fan blades with a clean cloth dampened in warm, soapy water, taking care to keep water away from the motor and electronics. Use a clean, dry cloth to completely dry all parts of the fan before reassembling it.

A. Most do, although you might have to attach the base to the bottom of the fan, a task that requires little in the way of tools to perform. If your USB fan can be powered by rechargeable batteries, you’ll probably have to charge the batteries before you can use them.

Q. My fan has started making noise. Is there a way to fix it?

A. If your USB fan starts rattling or whining after a couple of months of use, try removing the housing and adding a couple of drops of light oil to the shaft of the fan. Repeat as necessary if the noise returns. 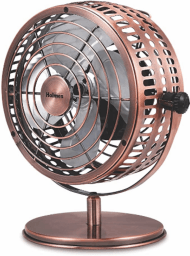 Best of the Best
HOLMES
Heritage Desk Fan
Bottom Line
With all the necessary components of a well-functioning fan, this model has a unique vintage finish that looks great on any desk.
Shop Now 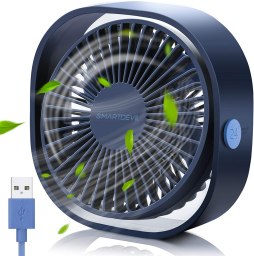 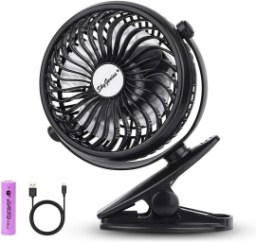 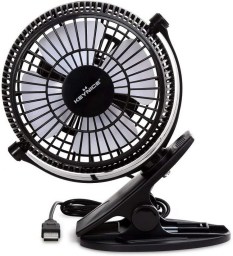 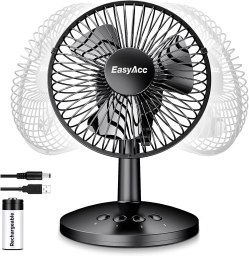 Top Pick
EasyAcc
Oscillating USB Desk Fan
Bottom Line
While a bit pricey, this option stands out for its oscillation feature and draws praise for its strong airflow.
Shop Now 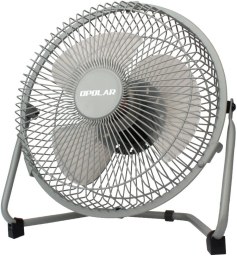 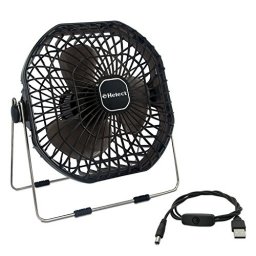 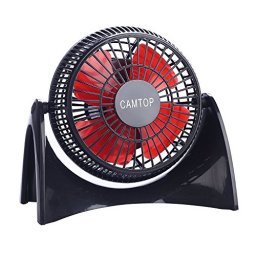