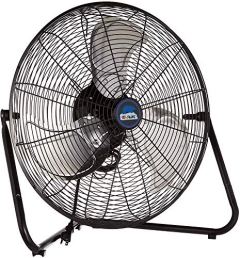 If you need a powerful fan for an area where noise level is not a concern, this fan might be a good choice.

A basic, mid-size high velocity model that also comes at a mid-range price. Its 20-inch build, strong metal housing, and adjustable 360 degree tilt make it practical for use around the home, garage, shop, and more.

A biggest downside (and an important consideration) to this fan is the extreme noise it makes on all three speed settings.

Despite is slim size, this fan is powerful and includes a handle and operating safety features to keep your home or work zone safe.

Customers claim that the airflow isn’t as powerful as they’d expected. 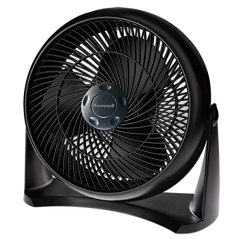 A budget-friendly small fan that is great for small rooms that need sufficient air circulation.

Measures 15 inches and has 3 silent fan speeds that give reasonable air output. Grill is easily removable in order to clean the blades easier. 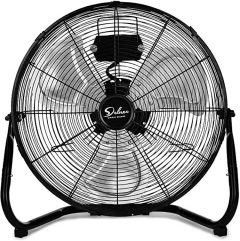 Simple and easy-to-use construction with a wide metal frame and grill for significant air speed.

Manufactured with reinforced ball-bearing motor and strong aluminum blades, making this a great selection for larger rooms, such as basements or garages.

Buyers say fan is too loud and noisy. 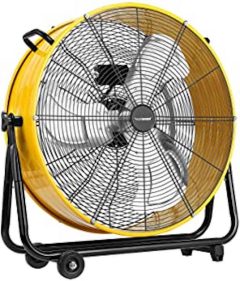 This stable drum design is a comprehensible pick for an industrial warehouse area.

Grill is fabricated with rust-resistant metal and has a unique panel structure that exerts more power. Comes with a set of wheels for easy mobility and power cord that measures 6 feet long.

Motor cannot run on the highest speed for long amounts of time.

Everyone knows what a fan does. It creates a current of air that cools and/or ventilates a space. Most people tend to grab a big one for large spaces or a little one for small spaces, and that's about all the thought that goes into the purchase. And that’s why they’re often disappointed. You don’t want to buy a traditional fan if what you really need is a high-velocity floor fan.

Fans are machines designed to perform a specific task. How well they perform that task depends on a number of factors. Manufactures have rated fans so buyers can know exactly what kind of task each fan is best suited to perform. The onus then falls on the buyer to choose the right fan for the right reason.

Don't worry. Getting the best high-velocity floor fan for your needs doesn't require a degree in mathematics. All it takes is knowing what you want to accomplish and finding the fan that is designed to do that, and we at BestReviews can help. As you read through this shopping guide, you’ll find what you need to know so you can choose with confidence. If you’re ready to buy, jump back to the top of the page to peruse some of our favorites. 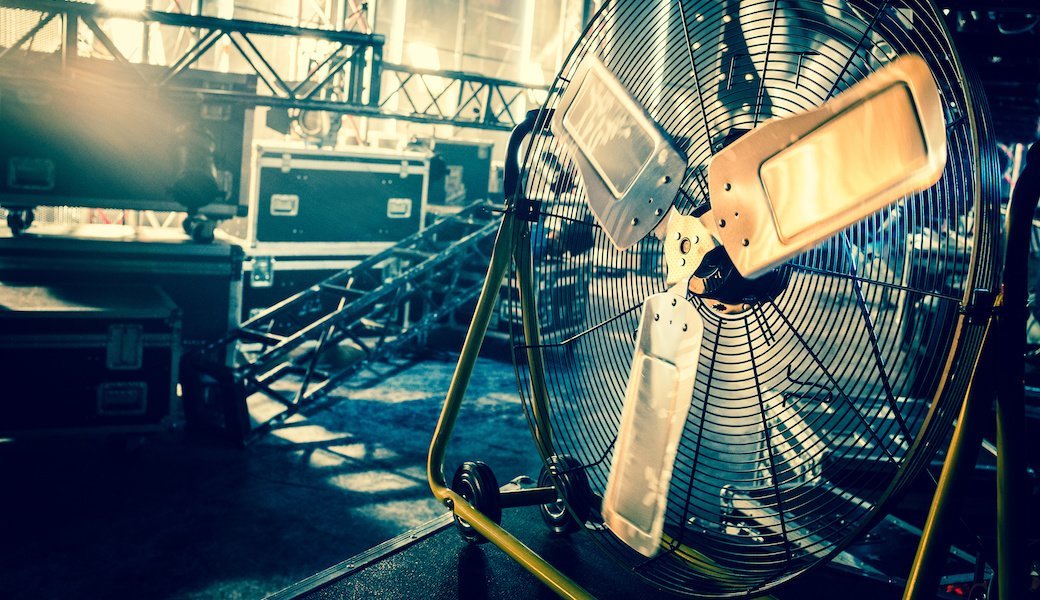 The earliest mention of a centrifugal fan was in a book called De Re Metallica (1556) by Georg Pawer. He wrote about how the fans were used to ventilate mines. It took until the 1800s for the technology to be used on steamships and in other industries.

Unless you’re using a fan to exchange warm, stale interior air with cool evening air from outdoors, a fan doesn't actually lower the temperature in a room. It just feels like it does.

When the air is still, the heat transferring from your body into the air lingers, creating a kind of insulation that keeps your body's natural cooling system from working effectively. A fan pushes that air away, enabling the body to function more efficiently, which, in turn, makes you feel cooler. Additionally, if the air moving across your skin is relatively dry, the breeze helps your perspiration evaporate more rapidly, which also helps the body to naturally cool itself.

This is why something as simple as waving a handheld fan in front of your face can feel so wonderfully refreshing. It displaces air, allowing the body’s cooling mechanism to do its job.

One of the ways fans are differentiated is by the amount of air they can move. This measurement is expressed as cubic feet per minute (cfm). If you have a box that is one foot tall by one foot wide by one foot deep (a cubic foot) and your fan can move all of the air out of that box in exactly one minute, that's one cubic foot per minute.

Axial fans: When you turn on a traditional (axial) fan, the motor spins and the blades whirl. The blades are fashioned in such a way that not only do they pull air in and push it forward but they also focus the airflow so it moves faster in front of the fan than it does in the back. Think of the whirlpool that forms in a draining tub. As the larger mass of water slowly flows down, it surges through the smaller opening and rushes with higher velocity out the exit. That's how an axial fan works except it uses air instead of water.

High-velocity fans: The number, shape, size, and curve of the blades all contribute to how much air a fan can move. But there is one more factor that steps up the cfm rate considerably, and that’s the speed of the blades. A high-velocity fan rotates the blades very quickly, thus creating a higher rate of airflow (higher cfm).

Let's look at some of the features your high-velocity floor fan might have.

Axial fan: This is made up of blades that rotate about an axis. Think of an airplane propellor or a ceiling fan. When these blades spin, it creates a low-pressure zone that sucks the air through the blades from the back to the front. These fans tend to have a higher airflow rate, but the pressure is low, which makes them better suited for situations that require a great amount of air to be moved around. Additionally, they require less power than a centrifugal fan.

Centrifugal fan/blower: These fans look kind of like a snail. There are vents on the sides through which the air gets sucked in so it can be forced out through a duct in the front. The pressure is higher than in an axial fan, but it provides a lower flow rate. The airflow is also steadier in these fans. Centrifugal fans are a better choice in heating and cooling units. They also work better than axial fans when drying floors and carpets.

The wider and longer the blades, the greater the airflow the fan is able to generate. Having more blades would serve the same purpose. The only drawback is the greater the resistance (resulting from larger or more blades), the more power you will need to run your fan.

Most (but not all) fans have three speed options. Before purchasing, check to see that the range of speeds makes sense for the job you need your fan to perform. In other words, having low, medium, and high doesn't matter if the high doesn't go high enough.

Except in some rare models, floor fans do not oscillate. The only control you have over the direction of the airflow is with a tilt option. If you need to aim the fan at the ceiling to gently circulate warm air in the winter or up the stairs to push cooler air to the second floor in the summer, you will need a tilt option.

Did you know?
There are industry standards for achieving optimum airflow in a building. However, there are several different ways that number can be calculated, and it depends on variables such as temperature, room size, and the number of people using the space.
STAFF
BestReviews

There are two factors that have the most impact on the price of high-velocity floor fans: the materials used and the cubic feet per minute.

Plastic fans range in price from around $25 to $80. As you move to the upper end, plastic fans increase in maximum cubic feet per minute.

Metal fans range in price from around $50 to $180. As you move to the upper end, metal fans increase in maximum cubic feet per minute. Additionally, the larger metal fans are heavy, and the frames are more durable. The heaviest of models also have wheels that attach or are built into the frame to facilitate movement. 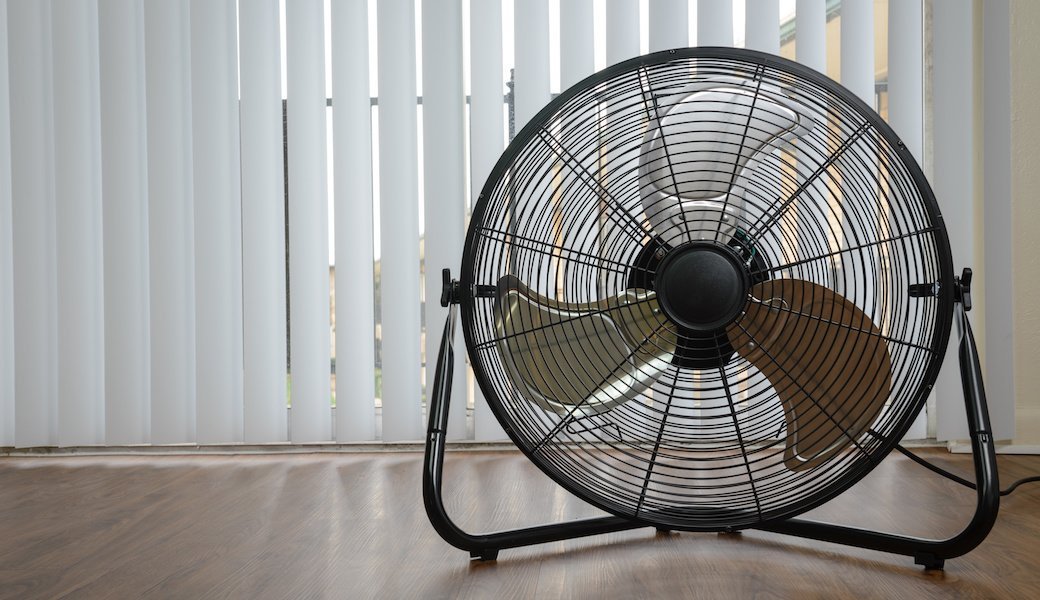 After inventing the electric (axial) fan in 1882, Schuyler Wheeler became part of Thomas A. Edison's engineering staff. He worked at the Pearl Street Station, the first commercial central power plant in the U.S., where he helped manage the underground wiring system that provided power to customers.

Q. Which is better: a fan or an air conditioner?

A. As always, the answer depends on your specific needs. Fans don’t actually cool air, so if you absolutely need a temperature change, you will need an air conditioner. However, fans can make it feel cooler, and using a fan is a greener choice. Because a fan uses no refrigerant and it takes less energy to run, you will leave behind a much smaller carbon footprint. A fan can also save you money on your energy bills because running the average window AC unit can cost anywhere from five to ten times more than running a fan.

A. Yes, some can be quite heavy. Larger models can weigh as much as 50 pounds.

Q. What’s the difference between a floor fan and a blower?

A. Although each can perform similar tasks, a floor fan (axial fan) is better suited to circulating air for cooling and ventilation while a blower (centrifugal fan) is most commonly used for drying areas. 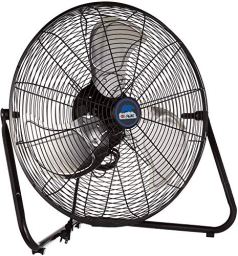 Best of the Best
B-Air
Firtana
Bottom Line
If you need a powerful fan for an area where noise level is not a concern, this fan might be a good choice.
Shop Now

Best Bang for the Buck
Lasko
4924/High Velocity 30 Inch Blower Fan with Handle
Bottom Line
Despite is slim size, this fan is powerful and includes a handle and operating safety features to keep your home or work zone safe.
Shop Now 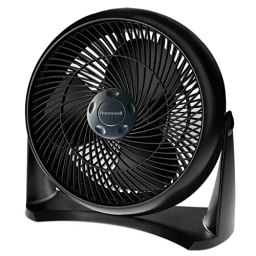 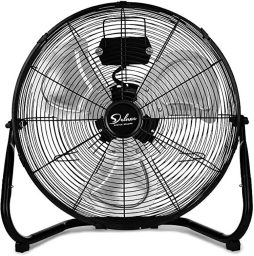 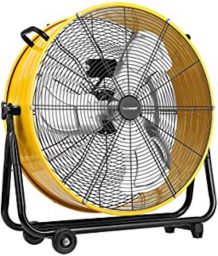 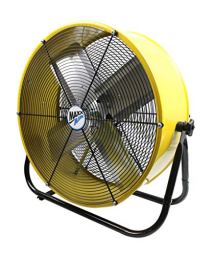 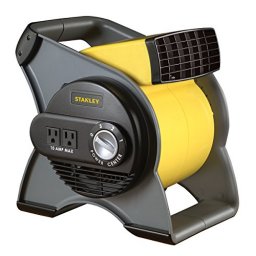 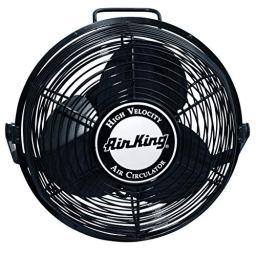 Top Pick
Air King
Powder-Coated Steel Multi-Mount
Bottom Line
If you like the idea of a mountable high velocity fan in a space-saving design, this is a good choice.
Shop Now