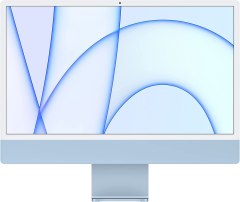 Has been updated with the powerful M1 processor and a return to multiple candy colors.

Hard to upgrade. White bezel takes getting used to. 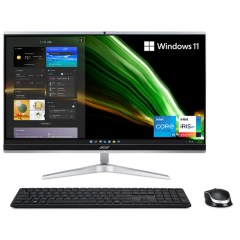 Does not include the mouse or keyboard that is suggested by the picture. 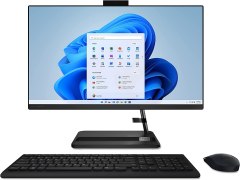 Balancing on what looks like an impossibly simple foot, it boasts chips from AMD.

Some fear the base is not as stable as it could be. 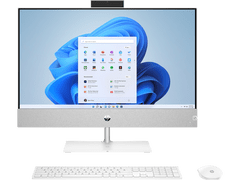 From a touchscreen tablet to a classic desktop mode, the HP Pavillion suits both business and entertainment purposes.

Updated with the most recent version of Windows for high-speed streaming and settings. Screen is anti-glare and offers ways to dim the blue light for user convenience. Offers 2 different channels to store system and personal data. Solid and smooth build.

One of the more expensive models on the market. 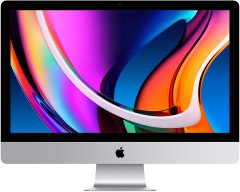 Apple aficionados will be perfectly happy with this compact all-in-1 from the pioneering iMac series.

Comes with a high price tag.

Whether you’re looking for a new family computer, a standalone kiosk for your business, or a workstation that doesn’t clutter your desk with wires, an all-in-one computer, also known as an AIO computer, is a terrific solution.

When the very first Apple Macintosh computer was released in 1984, it was nothing short of a technical revolution – and with its built-in monitor and single-box design, it was also the world’s first widely popular all-in-one computer. In the years that followed, computers became essential components of people's daily lives. They also became a clutter of wires, monitors, accessories, and peripherals that made messes of desks across the world. 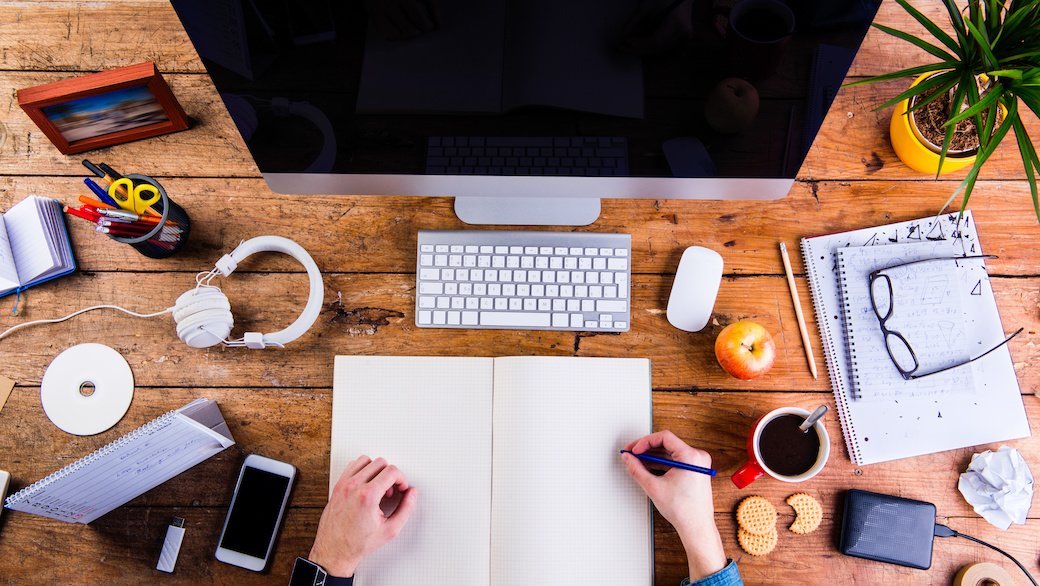 By packing laptop components into a monitor, all-in-one computers give you one thing other machines can’t: more desk space.

Should you get an AIO with a traditional or ultra-wide monitor? The majority of AIO computers feature traditional widescreen monitors with the same 16x9 aspect ratio as a TV. That said, “ultra-wide” screens – single, elongated screens that deliver the desktop space of two 16x9 monitors side-by-side in one monitor – are becoming increasingly popular. 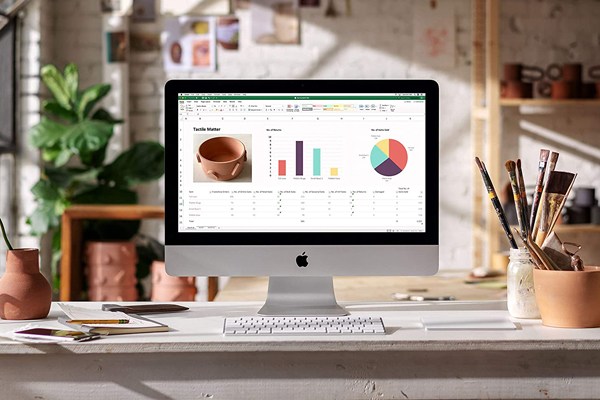 You should pick an all-in-one computer that is great at streamlining work and leisure space without sacrificing in terms of performance. 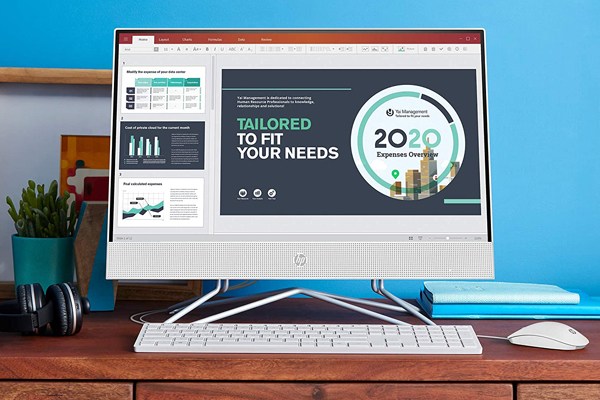 Most all-in-one computers are built around both of the major desktop operating systems, Windows and Mac. 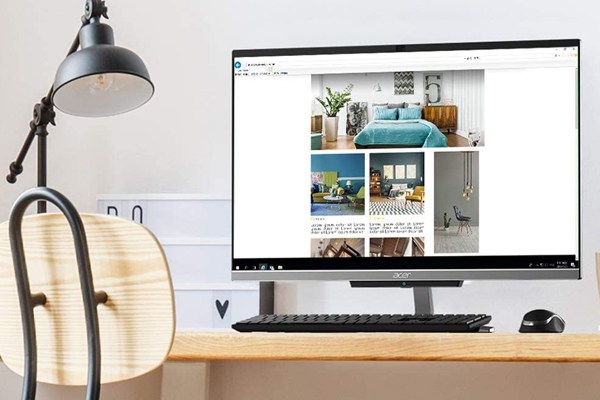 All-in-one computers should require minimal planning and maintenance while still providing the level of performance needed for a user’s most frequent tasks. 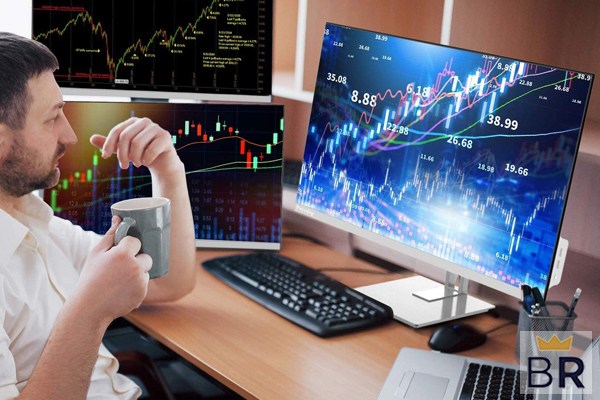 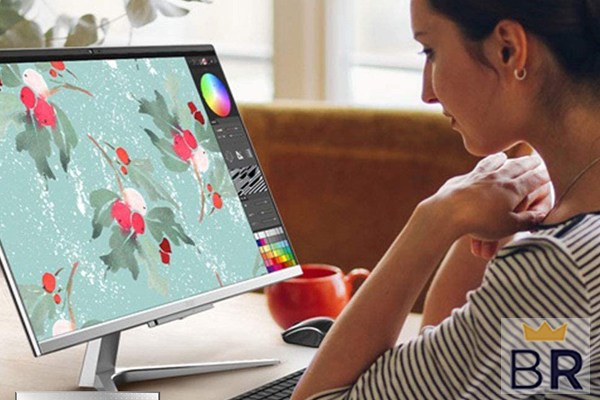 A premium all-in-one computer should have high-accuracy displays with wide color gamuts. Many of these are suitable for photo and video editing. 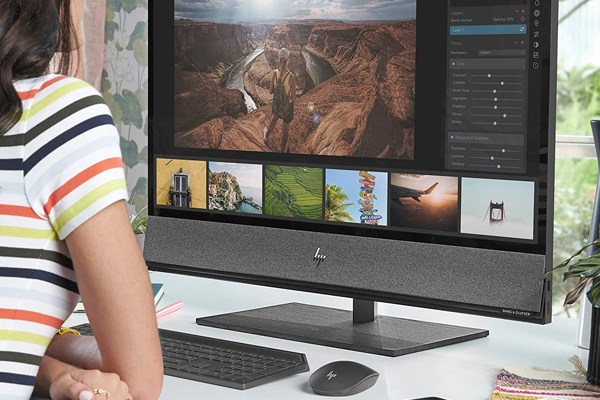 Because some consumers are casual users, some are hard-core gamers, and many fall somewhere in between, look for all-in-one computers designed to meet all of your needs. 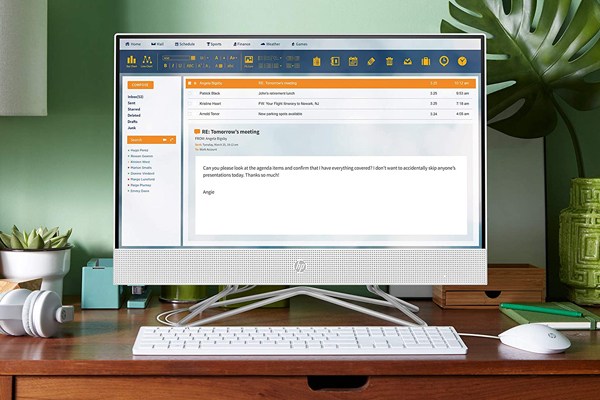 All-in-one computers should be user-friendly enough to be easily navigated by those without much electronics experience. 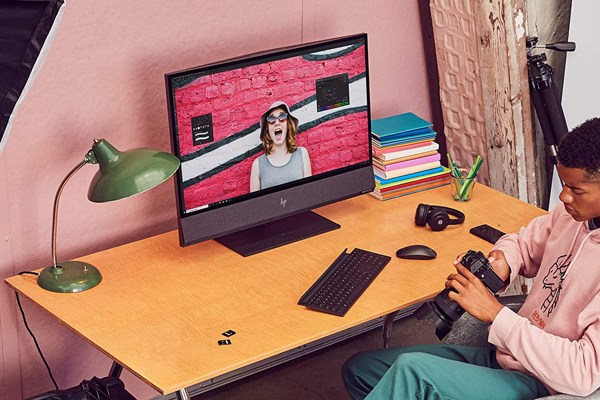 Curved screens are thought to provide a more immersive visual experience, which some consumers look for in a computer. 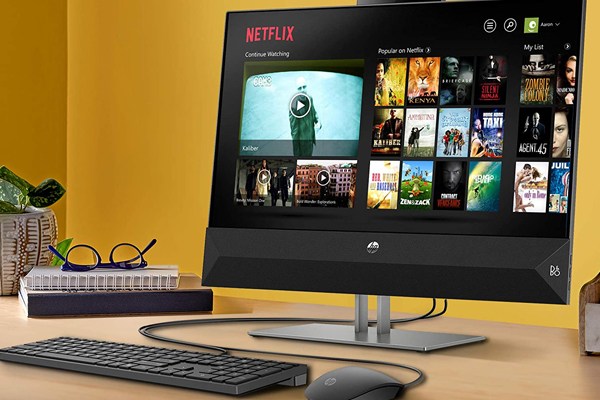 They should offer support for Ultra HD streaming through some of today’s most popular services and apps. 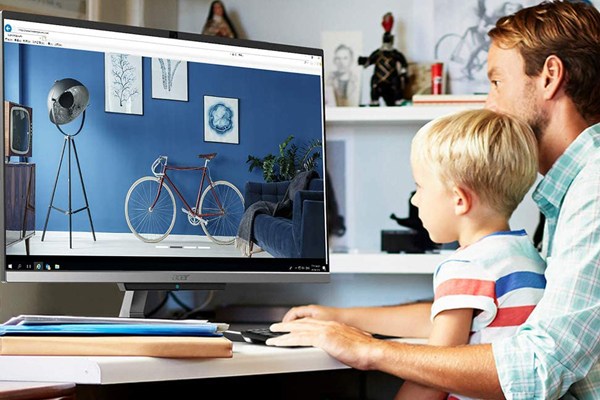 Should you get a curved-screen AIO or a flat-screen AIO? The debate between which screen type is better will never end because both are largely a matter of personal preference.

Picking the right size screen for your all-in-one computer is a big decision – one that you can’t go back on or leave for a later upgrade! All-in-one computer screen sizes range from 21” to 34”, although 24” is the most common. As you’re deciding what size to go with, think about your own space and your most typical computer tasks. Do you have enough room on your desk for a 34” screen? Will 24” be enough for your everyday applications?

No computer-buying experience is complete without asking the age-old question, “Would you like a Mac or a PC?” Nowadays, the choice has more to do with your personal preference than it does with functionality. Macs and PCs can perform the same tasks, albeit in very different ways, so in this context, it makes more sense to consider your own circumstances and taste.

Give some thought to whether the apps you use most are available exclusively on either Windows or Mac. Also, consider whether your other devices, such as smartwatches and gaming consoles, integrate better with one operating system or the other.

Expert Tip
If you don’t like the mouse or keyboard that comes with your AIO, you can always replace them with any third-party mouse or keyboard you want. We’re big fans of ergonomic keyboards and Bluetooth mice.
Jaime Vazquez
BestReviews Electronics Expert

If you’re interested in upgrading your all-in-one’s accessories, here are your best options.

There are all kinds of options available when it comes to picking the right computer mouse, ranging from minimalist single-button designs to models with multiple programmable buttons and LED lighting. Logitech’s M510 is the perfect middle ground: it can be a reliable straightforward mouse, and it’s also got programmable buttons for those who need a more specific configuration. Plus, it has a USB Unifying Receiver so you can use a Logitech wireless keyboard with the same wireless connection (and not have to give up another USB port). Whether you need something simple or flexible and reliable, this is one of your best options.

Edifier makes some of the best computer speakers in the world, and their entry-level R1280T speakers live up to their reputation. They’ve got multiple inputs so you can connect your computer’s audio as well as a secondary audio device like an Amazon Echo. But the big deal here is the sound: with rich bass, smooth mids, and crisp highs, they’re sure to satisfy any audiophile and make your computer’s music sound amazing.

Expert tip
If your AIO has a touchscreen, keep a microfiber cloth around to wipe off fingerprints occasionally.
Jaime Vazquez
BestReviews Electronics Expert

How to future-proof your AIO

Most all-in-one computers were not made to be upgraded or modified at all, so it’s important to pick one that’s adequate for both the present and the future. When it comes to future-proofing your machine, there are three main components worth investing in. 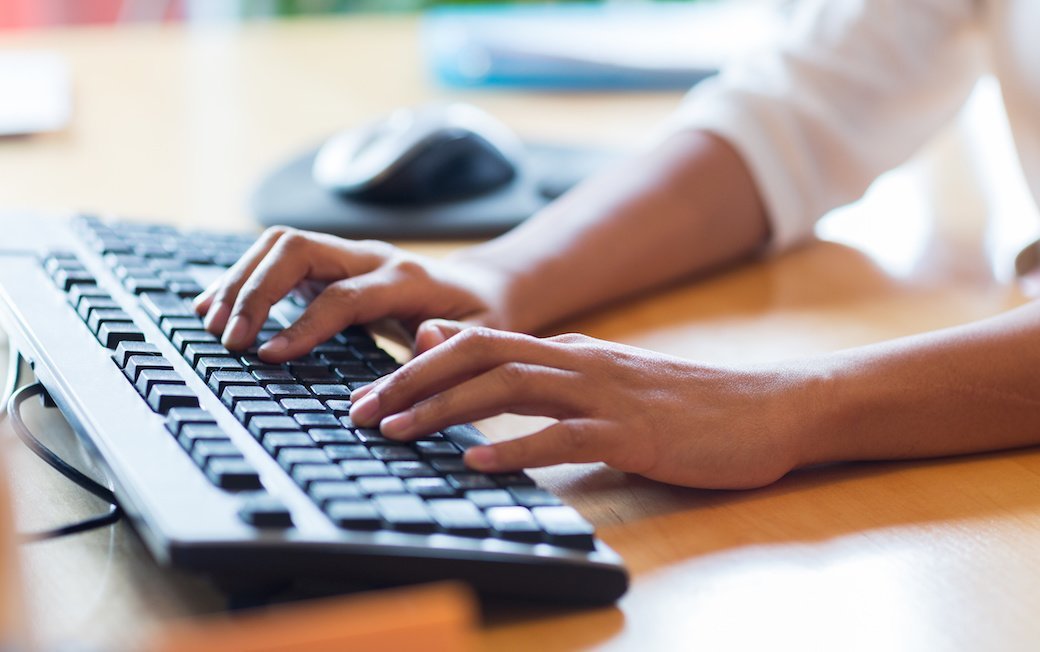 Most computers will require software updates before their first use. If you’re giving one as a gift or planning when to use one for the first time, budget time in advance to go through the updating process.

Q. Can I add a second monitor to an all-in-one computer?

A. Most, but not all, AIO computers have ports for connecting a second monitor. If you absolutely must have a two-monitor setup, make sure the all-in-one computer you buy has an HDMI or DisplayPort video port.

Q. Will I need to buy separate speakers?

A. Most all-in-one computers come with built-in speakers which are adequate for video conferencing and the occasional YouTube video. If you’re going to be doing any critical listening on a regular basis, you’ll want to opt for a separate set of speakers or headphones.

Q. Can I use an all-in-one computer for gaming?

A. Yes, but don’t expect miracles. Computers rely heavily on their video cards to render intense graphics with high motion, and most all-in-one computers come with video cards better-suited for casual use. Gaming is still a possibility on an all-in-one computer, but keep your expectations realistic; think more along the lines of Candy Crush than Call of Duty. 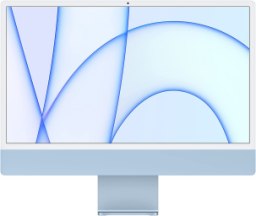 Best of the Best
Apple
2021 iMac with M1
Bottom Line
Has been updated with the powerful M1 processor and a return to multiple candy colors.
Shop Now 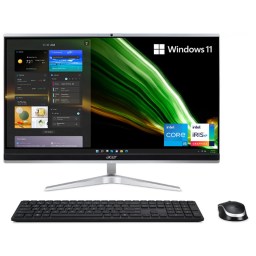 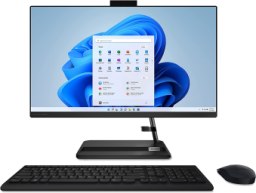 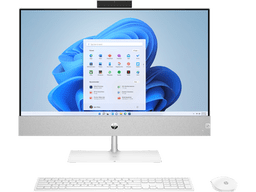 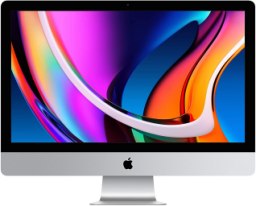 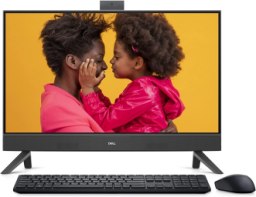 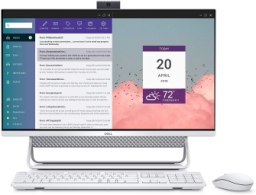 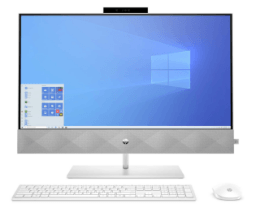 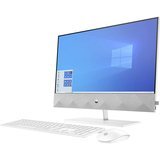 Top Pick
HP
Pavilion All-in-One 27
Bottom Line
With the wide range of options available, you can fully customize this computer at the time of purchase to meet your precise needs.
Shop Now 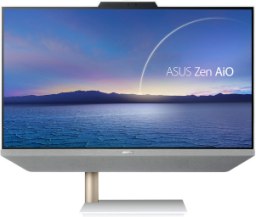