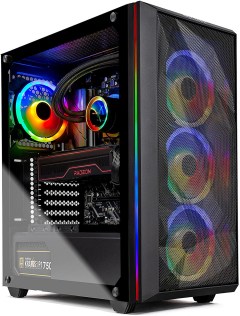 The Chronos can handle most modern games easily with a great processor and graphics card, while ensuring your system remains cool.

A great cooling system that utilizes liquid cooling to ensure that the desktop does not overheat. The hardware is neatly assembled, which allows it to be customized extremely easily whenever there's a need for an upgrade. Great processor and storage space.

Can be loud at times.

A powerful but well-priced gaming setup with smooth, reliable performance.

This PC is equipped with a 3.4GHz Ryzen 5 2600 processor with an RTX 2060 GPU and A320M motherboard. The 16 GB of RAM guarantees responsiveness, and 3 RBG fan rings provide maximum airflow.

The SSD may not provide enough storage for those with large gaming libraries.

The Blaze II is equal parts gaming powerhouse and excellent value for its price.

Its included mouse isn’t the best model ever. 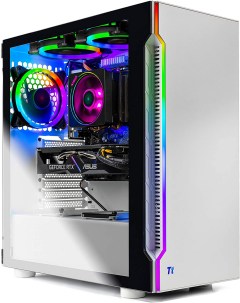 Comes with a mouse and keyboard dedicated to gaming. The powerful graphics card allows users to play the latest games on higher graphic settings. The design of the PC demands attention and stands out in any setting. One of the best entry-level gaming PCs on the market.

Not a reliable cooling system. 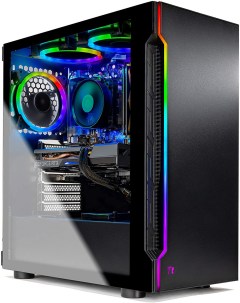 A fast and powerful gaming PC that excels with the AMD Ryzen and offers a great RTX graphics card.

A perfect entry-level gaming PC capable of running most modern games at high settings. The design of the PC allows users to inspect every inch of hardware and customize the LED lights inside the chassis. Powered by a quad-core processor that can handle most tasks easily.

The PC can have overheating problems.

If you’re in the market for a pre-built gaming PC, SkyTech deserves your attention. The brand has a well-earned reputation for offering powerful machines at great values, with sleek and flashy designs contrasting their impressive practicality. Though price tags can certainly climb as you add high-end graphic cards, fast processors, and liquid cooling to the mix, SkyTech gaming PCs are often great deals when the parts are considered. In addition, their out-of-the-box functionality will satisfy the majority of gamers.

SkyTech PCs generally run quietly even with multiple fans, and they are extremely easy to set up and get running. Some SkyTech towers have additional space for any replacements, modifications, and other future-proofing tweaks you desire.

The brand’s catalog is vast, with options for nearly every experience level, budget, and performance needs. This makes it easier to get the hardware you need without overpaying. Not sure what you want? We’re here to help.

High-end gaming PCs are exceptionally powerful, which makes them extremely suitable for other non-gaming related (but resource-intensive) tasks. Some of these include video rendering, data mining, scientific modeling, and cryptography.

Out of the box, SkyTech gaming PCs exclusively use the Windows 10 operating system. With that out of the way, here are the key considerations of a gaming setup.

The central processing unit (CPU) determines how quickly your computer can run programs, execute commands, and, well, process data. In simple terms, the CPU is the brain that determines how “fast” your computer is. The speed of a processor is measured in gigahertz (GHz), so the more GHz you have, the faster it will be.

CPUs often have a “boost” feature that can temporarily increase the speed of your processor. Note that this is different that overclocking, which entails manually changing your processor settings to run at higher speeds than normal.

SkyTech offers AMD and Intel CPUs for its machines. Intel CPUs are generally costlier, but they boast impressive speed and power. AMDs are less expensive, but they boast great value-for-dollar and flexibility in terms of overclocking.

The graphics processing unit (GPU, also known as the graphics card) is just as important as the CPU in terms of determining gaming performance. In essence, a GPU converts data into visual language your monitor can display, turning lines of code into race cars, cities, lightsabers and other in-game elements. The more powerful the GPU, the smoother and crisper the visuals will be.

RAM stands for random access memory, and the amount you have determines how much data your computer can load at once. In that respect, a healthy amount of RAM can be just as important to gaming performance as the CPU itself. Budget for additional RAM if you’re interested in multitasking, such as gaming and streaming at the same time. The absolute minimum for a gaming rig should be 8GB; we recommend 16GB.

Storage is very straightforward compared to CPUS, GPUs, and the like — it’s how much “space” your computer has for storing programs and data. More storage is obviously better, but you must decide what type of storage media is best suited for you.

Hard Disk Drives (HDDs) use rotating magnetic disks to store data. These are very cost-effective. However, their moving parts result in overall slower read/write speeds compared to the alternatives.

Solid State Drives (SSDs) use no moving parts and are similar to USB sticks. They are faster than HDDs but more expensive.

A motherboard links all of your computer’s systems together, allowing them to communicate and execute complicated tasks. It also allocates power among the various systems. Motherboards have a number of slots on them for various hardware options, so consider a motherboard with additional slots if you think you may want to add RAM or other peripherals in the future.

A gaming machine uses a significant amount of energy, which creates heat. Cooling systems are absolutely vital because of this, not only to keep your computer running efficiently but also to reduce wear and tear over time. Some SkyTech PCs are air-cooled, with multiple fans providing airflow to key components. Other units utilize liquid cooling systems or a combination of the two.

Expert Tip
PC towers with unconventional designs and crazy lighting can be appealing, as they allow you to inject a bit of style into your setup. However, keep in mind that ornate layouts can come back to bite you when you need to upgrade or do maintenance. The ability to take apart your PC without special tools is a huge plus.
STAFF
BestReviews

Without connectivity, your computer is just an expensive paperweight. Connectivity to other devices is accomplished via ports such as USB, USB-C, HDMI, Ethernet, and others. Keyboards, mice, monitors, and audio equipment all interact with your PC through a port, so keep an eye on how many are available.

Virtual reality gaming is accelerating by the year, both technologically and in overall popularity. VR titles offer a level of immersion other game types simply can’t match, but you need the right system to commit to VR. For instance, some games require a constant high frame rate, measured in frames per second (FPS), in order to run properly. If you’re interested in exploring VR games, seek out a system with a powerful CPU and GPU, 16GB of RAM or more, and an SSD.

Skytech Gaming PCs offer impressive bang-for-the-buck value, with competent machines available for far less than $1,000. The brand has several high-end PCs for sale, though. The most common pricing brackets are as follows.

Inexpensive: For $600 to $800, expect to find computers with 3 GHz to 3.8 GHz processors, 1050 Ti-range graphics cards, traditional 1TB hard drives, and about 8GB of RAM. While on the lower end of the Skytech pricing spectrum, these machines are very capable of playing games like Fortnite, Overwatch, PUBG, and Apex Legends on decent settings.

Mid-range: Budget between $1,000 and $1,500, and you’ve entered a new realm of performance and future-proofing. Computers in this range typically boast more powerful processors, approaching and exceeding 4.0 GHz, while featuring 2060 to 2070 graphics cards, faster SSDs, and 16GB of RAM. Expect a stable 100 to 120 FPS on demanding titles, even with high settings.

Did you know?
Some PCs utilize dual-chambered designs to help with aesthetics and heat management. In these cases, the power supply is separated from the motherboard, GPU, RAM, and other components.
STAFF
BestReviews

SkyTech has been one of the biggest names in prebuilt PCs for years, so it was difficult to limit our favorites list. An alternate that piqued our interest was the Legacy Mini, a small-footprint machine with impressive specs. It offers a 3.2GHz processor, GTX 1660 Ti, 16GB of RAM, and a 500GB SSD for less than $1,000.

Another model we like is the SkyTech Blaze, notably for its high value. Standard equipment includes a 2.9GHz Intel processor, a GTX 1660, 8GB of RAM, and a 500GB SSD.

G-SYNC, FreeSync, and VSync monitors cut down on stuttering and screen tearing to provide a smooth gaming experience. That said, some systems can potentially add small amounts of input lag, depending on your monitor’s refresh rate and your computer’s frames per second.

Q. Shopping for gaming PCs can be daunting. How do I determine what hardware I need?
A.
The hardware you need depends completely on the games you want to play and your budget. If you just want to play Fortnite with friends, you don’t need a crazy-powerful system. If you want to play Cyberpunk 2077 on ultra settings, however, you’ll require some high-end gear.

Determining the specifics is made much easier by resources like “Can You Run It?”. Sites like these can scan your PC for game compatibility and provide the minimum and recommended specs needed to run them well. Search for your most desired game and use the specs as a baseline to get started.


Q. Are gaming laptops worth it?
A. Gaming laptops have come a long way and can surprise you with their performance. The laptop design also affords a great deal of flexibility, as you can take your games with you wherever you go. That being said, traditional tower PCs will almost always be better equipped. They’re easier to upgrade as well, and issues like battery life are not relevant. If you travel often, though, the portability of a gaming laptop may sway you just enough to compensate for the performance drawbacks.


Q. I’m buying a gaming PC to stream video games online. What else should I buy?
A. Your PC may be able to play resource-intensive games, but streaming your content to a platform like Twitch, Mixer, or YouTube Gaming is another ballgame. At minimum, you’ll need streaming software like OBS, XSplit, or Gameshow, but dual monitors, a webcam, and a high-quality microphone are recommended. If you want to take your stream to the next level, consider a green screen for a clean look and clever transitions. Some streamers even opt for a dual-PC setup, which features one computer to play the game and another to stream the content online. This takes the load off the gaming computer to maximize performance.


Q. What advantages does a prebuilt gaming PC have over a build-it-yourself model?
A. Gamers consistently recommend build-it-yourself gaming PCs, as they’re nearly always cheaper and allow for personalization. That said, prebuilt models offer several advantages. They’re constructed for all levels of gaming, with entry-level models, high-end rigs, and everything in between available to suit your desires. They also save you tons of time and hassle, as building a PC for the first time can be rather stressful. SkyTech gaming PCs’ value per dollar can certainly surprise you as well. Finally, they usually have in-house technical support teams to aid troubleshooting, as well as comprehensive warranties and financing options. 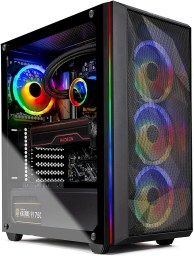 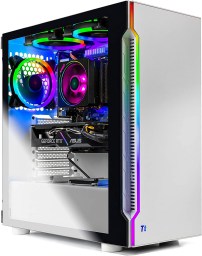 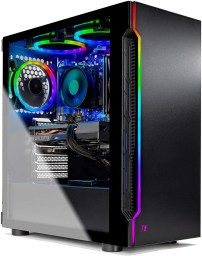