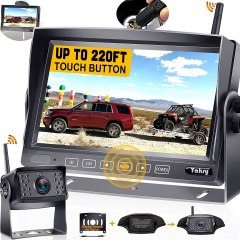 Some users have reported flickering monitors and scratchy pictures. 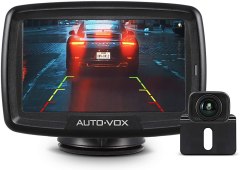 A simple device that improves rear visibility without breaking the bank.

Camera features a wide viewing angle of 110 degrees. IP68 waterproof certification on the camera. Includes a streamlined 4.3-inch monitor. Digital wireless transmission is stable and will not be interrupted by other signals such as Bluetooth.

Video quality is limited to 720p. 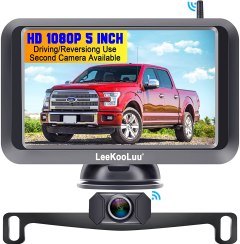 Some issues with installation. 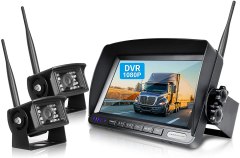 With a transmission range of 120 feet, this wireless 2-camera system is perfect for large vehicles. Transmits at a rate of 7,200 bps for a lossless picture under 85 mph. The 7-inch LCD monitor supports additional cameras with single, dual, or quad view.

Image quality can get grainy and lag at higher speeds. 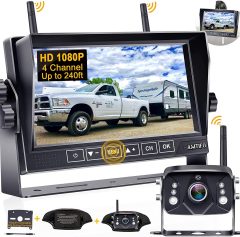 A camera for large vehicles that has a split-screen with 4 different views.

Has a stand for propping up on the dashboard and a suction cup for windshield mounting. Features a 7-inch LCD screen with 1080p resolution. Works with vehicles that have Furrion wiring. Records video and has a 2-year warranty.

May lose connection or fail to connect at times.

Since May 2018, rearview monitors — what most people call backup cameras — have been a legal requirement in new cars, RVs, and trucks, largely in response to government figures that tell us that 150,000 incidents and over 200 deaths result from accidents involving light vehicles backing up each year.

A wireless backup camera gives you the opportunity to add the same advanced safety system to your vehicle. They're easy to fit, and they eliminate blind spots, giving you a much greater field of view than you can get from the driver’s seat. There are plenty of cameras to choose from that are suitable for almost every vehicle from the smallest compact to the largest RV. The only challenge is in deciding the right model for your car or truck. 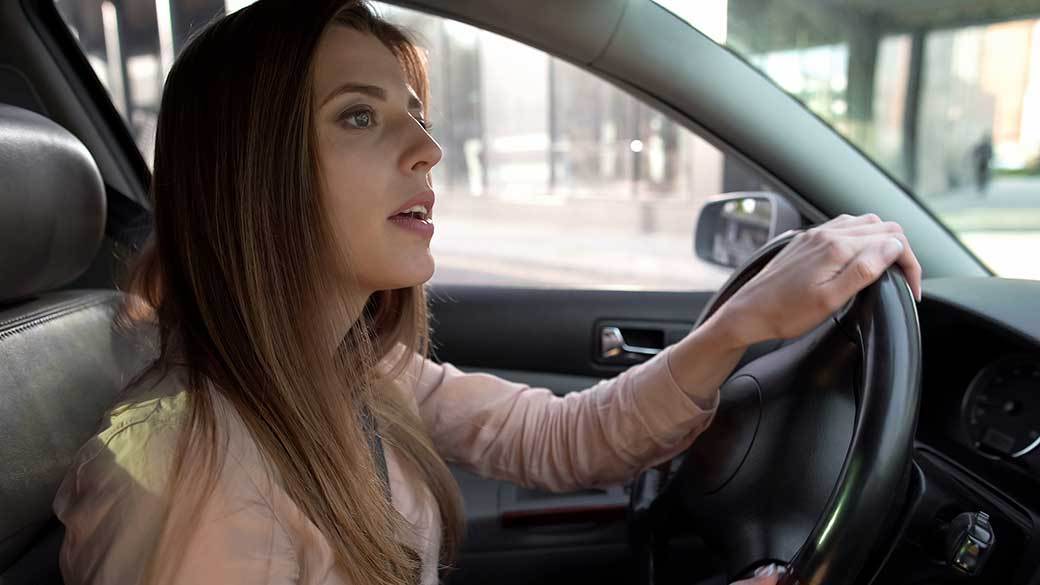 You’ll get a great view with a wireless backup camera, but bear in mind that it doesn’t have audible proximity warnings, so you still need to pay attention!

RF: With RF models you usually get a full kit that includes both camera and monitor. There’s also a greater choice among permanently installed RF models.

WiFi: With a WiFi system, you’re expected to use your own portable device, either a smartphone or tablet. As a result, entry-level WiFi models can be among the cheapest wireless backup cameras on offer.

There’s some misunderstanding that WiFi systems are a problem in areas where the internet connection is poor or nonexistent. In fact, the transmitter built into the camera creates its own WiFi signal, so it can work anywhere. The drawback with the cheaper models is that pairing them with your phone can be slow and inconsistent, leading to frustration among many owners. There’s also the fact that they tie up your device while you’re backing up, and that you need a separate mount to hold it in a convenient position.

Technically speaking, all RF signals are analog, but it’s possible to digitally encode them. As far as wireless backup cameras are concerned, this has a big impact. While the analog signal can be subject to interference from any other RF device, the same is not true for the digital signal.

Why are both available? Many analog devices are half the price of digital, and the amount of interference depends on a wide range of factors, so some users may never experience problems. On the other hand, if you park in areas with lots of radio waves (which can be a frequent problem in urban areas) the image can be very poor. If you’re on a tight budget, analog is better than nothing, but if you can afford it, we strongly recommend digital.

It’s important to pay attention to the specified range — and to take a stated maximum with a pinch of salt. The maximum is invariably quoted as “in ideal conditions.” Err on the side of caution by about 20% and you should minimize any connectivity issues.

"The most common problem with wireless backup cameras is a dirty camera lens! A quick wipe with a soft cloth works wonders. "
STAFF
BestReviews

Cameras: These can be mounted in numerous positions. The most discreet are almost invisible, but they do require you to drill a small hole in the rear of your vehicle. If you don’t like that idea, there are others that mount across the top of the license plate or replace the holder completely. Others can be fixed to the chassis using cable ties, 3M tape, or bolts, the latter being the most secure option with multiple camera systems designed for fifth-wheel and big rig setups. Most cameras are adjustable, so you can get the view you need regardless of the camera’s mounting position or the height of your vehicle.

Monitors: Monitors are usually mounted on the dash or provided with a suction cup for the windshield (some models offer both). The third option replaces your rearview mirror. It’s a very natural place to look when reversing, but it does restrict the screen size.

Naturally, all manufacturers claim their cameras are waterproof, but you need to check the ingress protection (IP) rating. If the camera doesn’t have one, it hasn’t been independently tested. The most common are IP68 and IP69. The first number is for dust, and the 6 means dustproof. The second number is for liquid, and 8 means it can be submerged to about 5 feet (1.5 meters) for 30 minutes. A 9 means it will survive a high-pressure water jet or even steam. You might also want to check operating parameters, the plus and minus range within which the camera will function.

Some cameras are fitted with LEDs to provide extra light when reversing. There are two kinds. Standard LEDs simply provide extra brightness. Infrared (IR) LEDs provide true night vision, but the image is black and white.

Almost all wireless backup cameras provide a parking grid — on-screen guidelines. Often this is adjustable to suit your vehicle, but not always. On some cameras, it can be turned off completely.

Cameras are generally set up to come on automatically when you engage reverse gear, and a sensor needs to be wired in for this to work (into the rear backup light). Some also have an “always-on” option. We found only two fully wireless backup cameras, but without being wired to the backup light, these need to be turned on and off manually.

The angle of view can be anything from 110° all the way to 170°. Problems with edge distortion can occur on some cheap cameras that offer extreme angles, and 120° to 140° is as much as you really need.

Monitor sizes are generally 4.3 inches, 5 inches, or 7 inches. The latter is usually found on systems that use two or more cameras and offer split-screen views. Image resolution should be checked carefully because what one manufacturer calls “high definition” (HD) isn’t necessarily what you take it to mean. Many entry-level wireless backup cameras have a resolution of 480 pixels, and a lot of users feel that’s sufficient for the purpose. Also, 720p is fairly common, and a few are 1080p, though it’s debatable whether you really need 1080p resolution on a backup camera. If it’s incidental to the price, it’s a bonus, but we wouldn’t feel the need to pay extra for it.

Some cameras give you the option of a true image or reversed image. You’re used to seeing a reversed image when you look in your rearview mirror, so we don’t see the need for a true image. In fact, it can be quite disorienting.

The cheapest wireless backup cameras are small WiFi units that cost around $35 to $50. For the same price, you can get full RF kits. Range should be acceptable for cars and small pickups, but the RF models are analog systems, so interference can be a problem.

There are many excellent digital backup cameras in the $80 to $150 range, including WiFi models, and we expect most people will find what they need here.

High-resolution 1080p monitors and multiple camera/split-screen systems increase the price. There are several at around $250, but setups for big rigs can reach $500. 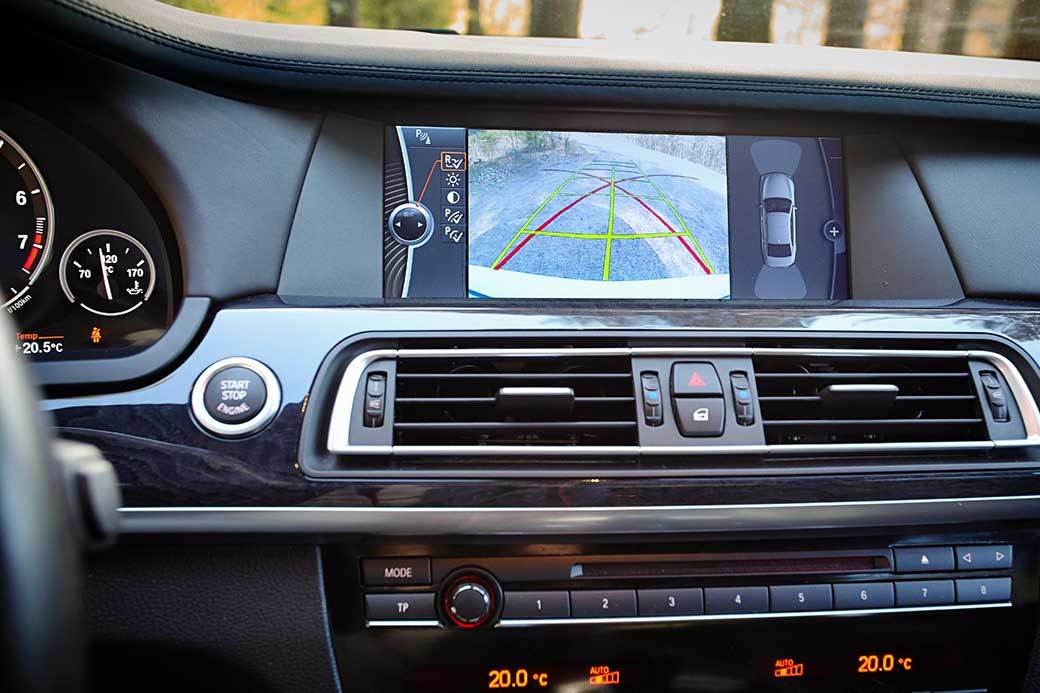 Don’t get into the habit of relying 100% on your backup camera. As the National Highway Traffic Safety Administration says, “Rearview video systems are not a replacement for mirrors or turning around to look; rather, they're an added safety tool for revealing hidden dangers.

A. Technically speaking, wireless and WiFi signals can be affected by wind and rain, but the short distances involved mean it’s unlikely with backup cameras. However, the camera itself has a temperature range, so it could get too hot or too cold to function properly. These are usually quite extreme, but you might want to check specifications if you spend a lot of time in the snow, or in the desert!

A. It’s possible but unlikely. If the battery is in good condition, it would have to be left on for several days. Most monitors are powered from your vehicle’s internal 12-volt socket (cigarette lighter). They have an on/off switch or can simply be removed after you’re parked. Those that are direct wired are automatically turned on and off with the ignition.

Q. So wireless backup cameras don’t need any wiring at all, right?

A. Not exactly. Most still need a little quick and easy wiring to hook the transmitter up to the rear backup light so your camera will activate when you put your vehicle in reverse. Some units are completely wireless, but you have to turn them on and off manually. 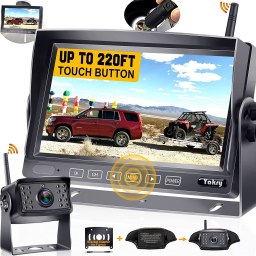 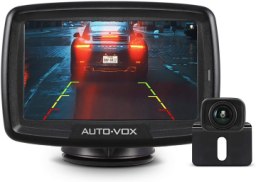 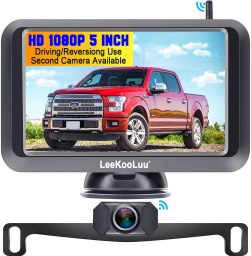 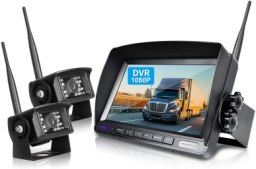 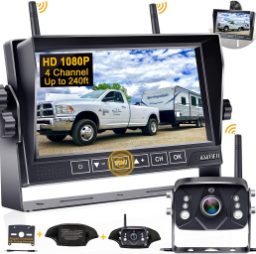