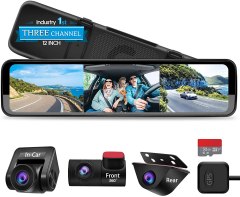 Three cameras cover all your angles, even inside the vehicle. Easy to switch between cameras with the 12-inch touchscreen. Rear camera is waterproof. Includes Starvis Night Vision, parking assistance features, video recording, and a GPS antenna that can add contextual information like speed and location.

Quite expensive. Most owners will want to upgrade from the included 32GB memory card. 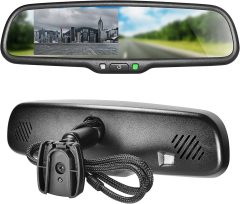 A more affordable mirror that displays the rear view automatically without hiding the entire mirror.

A 10.5-inch black mirror with a mount, cable, cord cover, and necessary tools. Features a 4.3-inch LCD screen with brightness that changes automatically. Works with many RCA backup cameras. Cord has 2 RCA inputs and a fuse box.

Does not come with cameras. 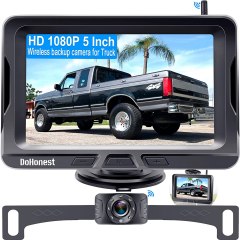 A streamlined, 1-camera system with an intuitive wireless monitor.

Mirror and screen include some slick features like a compass and temperature control.

Includes an auto-dimming feature to help the mirror adjust to the surrounding lighting. Temperature and compass displayed on the screen. Guidelines are adjustable to fit your vehicle. Looks like a normal rearview mirror when not in operation. Comes with a remote.

The installation on this rear mirror is a bit complex. It also does not include the actual camera. 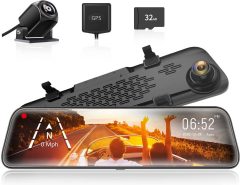 A feature-packed mirror that includes cameras for front and rear views and various convenient functions.

Shows front and rear views in split-screen and night vision. Senses impact and records video of the accident. Shows the time and date, speed, and direction. Offers location monitoring and streaming when parked for security.

Some features may fail to work.

New, larger automobiles often come standard with LCD screens and cameras to eliminate blind spots. Unfortunately, older models — the very vehicles that revealed the need for these tools — usually lack this technology. That doesn’t mean you have to keep driving blind or upgrade to a new vehicle, however. An aftermarket rearview mirror screen can bring your current vehicle up to date.

Rearview mirror screens are LCD monitors you attach to your existing rearview mirror fixture. They display real-time video relayed from cameras you mount at the vehicle’s rear and dash. Many can also record video, provide alerts if you leave your lane, and display information like the time and temperature.

Most rearview mirror screens aren’t cheap, but they cost less than a single month’s car payment — and accident repairs. 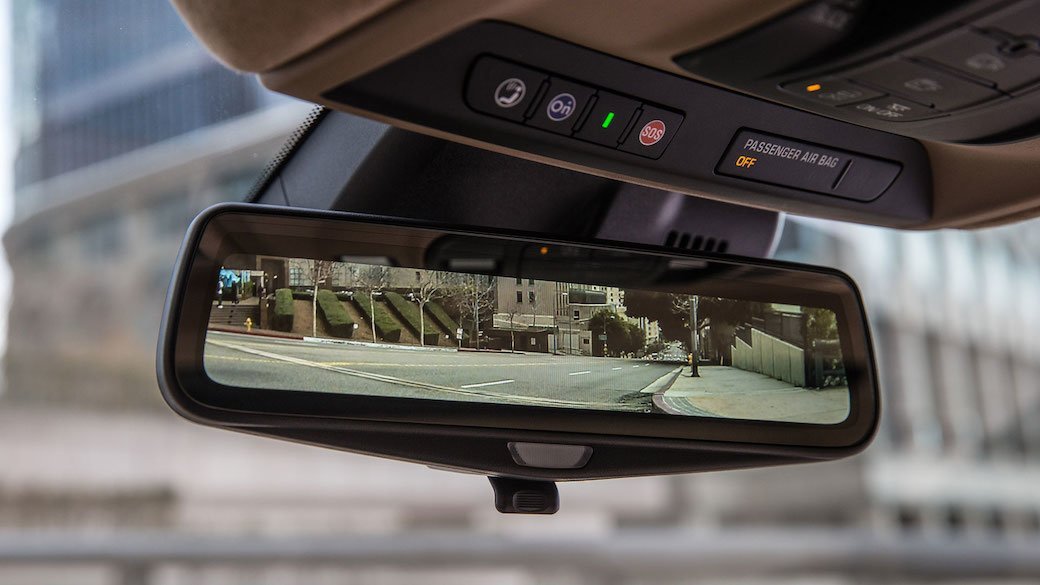 Rearview mirror screens often give you a view that’s better than real life. Since the camera is mounted in the rear of your vehicle, it eliminates obstructions like headrests and pillars from your view.

When you’re looking at rearview mirror screens, you need to know what you’re getting. Some packages include an LCD screen as well as both dash and rear cameras. A handful of them offer only the screen and a rear camera. Others may include just a high-quality screen and require you to find a compatible camera. This screen-only option lets you customize, but this is usually more costly in the end.

Screen quality is important, but it can only display the image transmitted by the camera. Resolution is a big factor if you’re getting a screen that includes a camera. Some sets transmit full HD video (1080p) from both dash and rear cameras; others relay full HD from the front and 720p from the rear. Budget-priced rearview cameras may only take VGA-quality video. Most experts advise, though, that high resolution is more important in a dash camera than in a rear camera. In an accident, dash camera video can provide evidence that helps determine fault and can provide important details such as the make, model, and license plate number of a car.

Some rearview mirror screens display an image as large as your factory mirror, and they often give you an unobstructed view that is clearer than a reflection. Other screens project a smaller image, which allows you to use the uncovered portion as a traditional rearview mirror. Smaller screens are less expensive and allow you to use the mirror to supervise young children in rear seats. Both screen sizes display the same wide viewing angle, but the image itself varies.

Many mirrors securely screw into your existing mirror post. Others strap onto the factory mirror using heavy-duty plastic straps. Strap-on models are usually less expensive, but the straps may fail over time, especially if you live in a warm climate. Either way, check the measurements of your mirror to make sure the screen you choose is a good fit.

Dash cameras are often integrated with the screen fixture, but rear camera videos must be transmitted through a cable. Standard cables usually measure 18 to 20 feet, so if your vehicle is longer, the cable may not reach all the way to the back. Many manufacturers offer longer cables upon request.

Expert Tip
If you need to get a separate rearview camera, models that mount onto your license plate or directly behind it are usually the easiest to install.
STAFF
BestReviews

While the distinguishing features of some screens are integrated into the screen itself, others are more of a function of your camera or cameras.

Some higher-end models feature motion detection alerts — even when your vehicle is turned off. In some cases, motion within three feet of the vehicle will trigger video to record; others will trigger flashing lights or sounds.

These security features can give you peace of mind, but they can also quickly drain your vehicle battery when plugged into the auxiliary power outlet.

Did you know?
Some screens have different viewing options that allow both full-screen and picture-in-picture displays.
STAFF
BestReviews

Inexpensive: You can find low-priced, well-rated rearview mirror screens for $35 to $70. Screens in this price range usually have touch-screen controls, but the LCD display portion will typically cover only half of the mirror space. They will likely strap onto your existing mirror. If included, cameras will relay video that ranges from VGA to lower HD quality resolutions. They may have parking line assistance, but the lines are rarely adjustable.

Mid-grade: Rearview screen mirrors in this tier may cost anywhere from $100 to $180. In this price range, LCDs will still cover about half the viewing area. They should, however, transmit higher quality video from the dash and rearview cameras. Screens in this price range may automatically adjust to light conditions and may adjust camera angles when you drive in reverse. Parking line assistance is generally included but may or may not be adjustable.

High-end: The best rearview mirror screen sets will cost $200 to $300. These screens should provide wide-angle views covering the width of the mirror. Rear cameras should relay lower-quality HD video, and dash cameras should record full HD video. Screens should have all the same features as mid-grade models as well as other safety features.

"Most rearview mirror screens are powered through your auxiliary power outlet; if you already use your jack to charge your phone or power a GPS unit, you will need to find an alternate power source for your accessories. Look for a plug with a splitter, or wire your screen kit into your fuse box."
STAFF
BestReviews 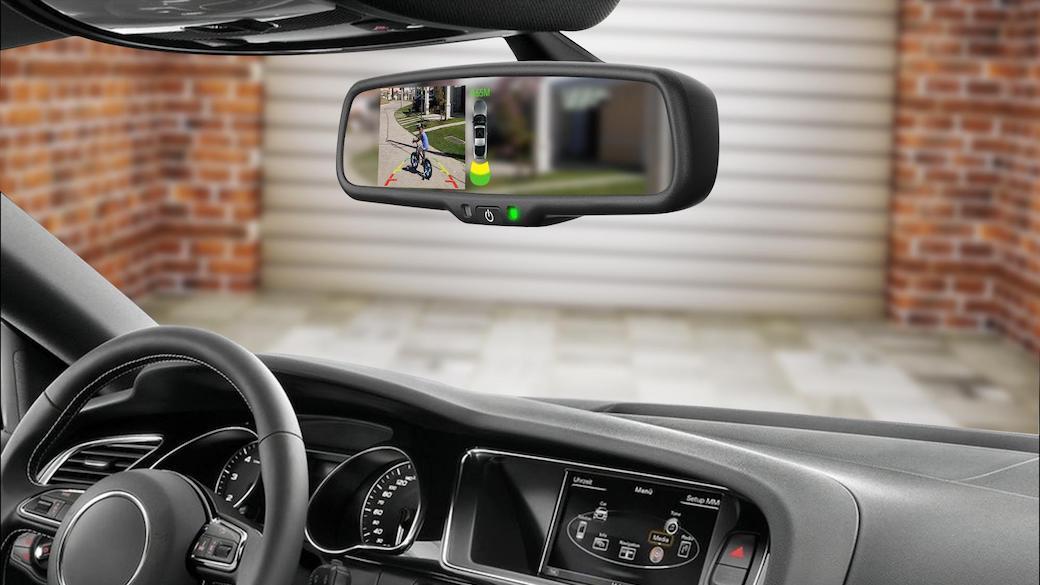 Most rearview mirror screens display at least 140 degrees of visibility in the rear — much more than you can visually scan without a camera.

Q. Can I install a rearview mirror screen myself?

A. If you’re handy, you might be able to do it. Screen installation is relatively straightforward, but the rear camera portion can get complicated. Instructions will vary by model but generally involve drilling and wiring through the license plate mounting area. You will also need to thread the camera cable into the trunk and fuse the camera wires into the reverse light wires. Next, you will have to run the camera cable to the front of the car, connect it to the RCA cable, and run it into the fuse box. If this sounds doable to you, keep in mind the process takes about two hours. If it sounds intimidating, contact an electronics dealer or auto mechanic for professional installation.

Q. Can dash camera footage really help in an accident?

A. Attorneys increasingly see dash camera evidence admitted into court and influencing outcomes. Dash camera video can be used to disprove spurious claims from aggressive insurance companies and can even help to track down hit-and-run drivers. But you’ll need quality footage to make your case. Videos that are grainy, blurry, or otherwise poor in quality may be dismissed.

Q. How large of an SD card do I need?

A. If you mean physical size, check whether your unit takes SD or micro SD cards. If it needs an SD, you can still use a micro SD with an adapter, but an SD card can’t replace a micro SD. If you are concerned about storage size, a 32GB card should give you plenty of storage, offering up to an hour of storage before it begins overwriting earlier footage. This is more than enough for most daily trips. Look for cards with a speed of Class 10 for the best quality recording, ideally. If price is a major issue, you should go no lower than Class 6. 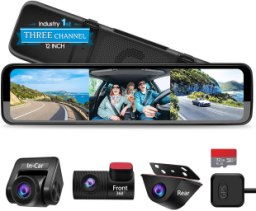 Best of the Best
Pormido
Triple Mirror Dash Cam
Bottom Line
A 3-in-1 model with a front dash cam, a backup cam, and an in-car camera.
Shop Now 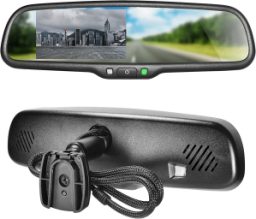 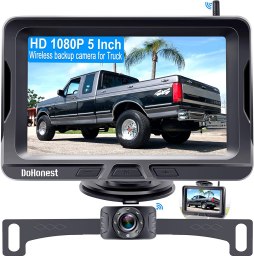 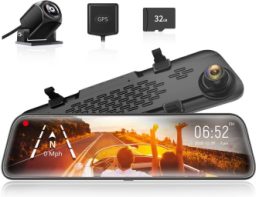 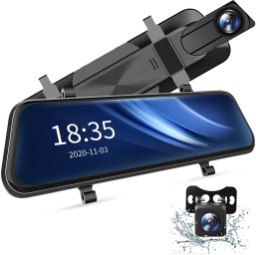