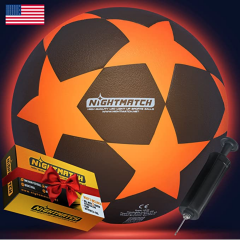 A glow-in-the-dark ball that sets up quickly and won't be damaged by water.

Size 5 soccer ball with a traditional style. Orange LED lights turn on for 30 seconds upon impact. Comes with extra batteries, replacement tool, pump, and video instructions. Safe for use in rain.

May feel heavier than a regular soccer ball. 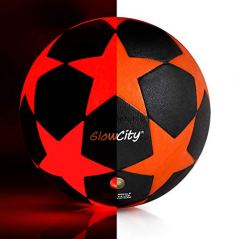 Fun black and orange soccer ball with extra-bright LEDs that give it a glow kids love.

Traditional size 5 ball is suitable for all ages. Resistant to rain for play on wet days. Batteries can provide up to 30 hours of continuous play. More durable than you might expect.

Batteries are not rechargeable. Not for use in a pool. 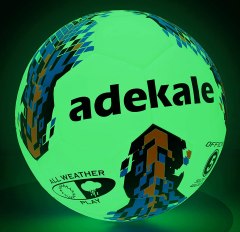 Ball has 32 panels and an official size 5 design, so it works for all ages. Ships with air pump and needles for inflation. Absorbs light during the day and glows at night.

Glow does not last as long (between 1 and 3 hours) as balls with LEDs and batteries. 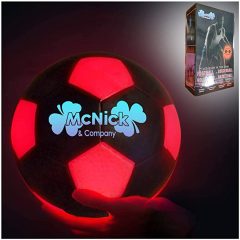 Red and black soccer ball with LED batteries that last 100 hours. Design features the manufacturer logo, 2 clovers, and a classic pentagon pattern. Glows upon impact for 20 seconds. Comes with an inflation pump.

This ball is not waterproof.

Soccer is a popular sport for a reason: you can start a game almost anywhere and with almost any number of players. As long as you have a ball and a goal, everyone on the field can get their kicks.

Light-up soccer balls may seem like a gimmick at first glance, but on a practical level, they give enthusiasts of the game a useful option for extending play to nighttime. These illuminated models are similar to regular soccer balls in many ways and thus can be useful in some practice situations, both for individual players as well as for teams.

While light-up soccer balls don’t meet governing-body regulations for league play, they undoubtedly make practicing or playing soccer at night easier, and they can deliver plenty of fun in the process. This guide will “enlighten” shoppers about the various options and details they’ll come across when looking for a light-up soccer ball. 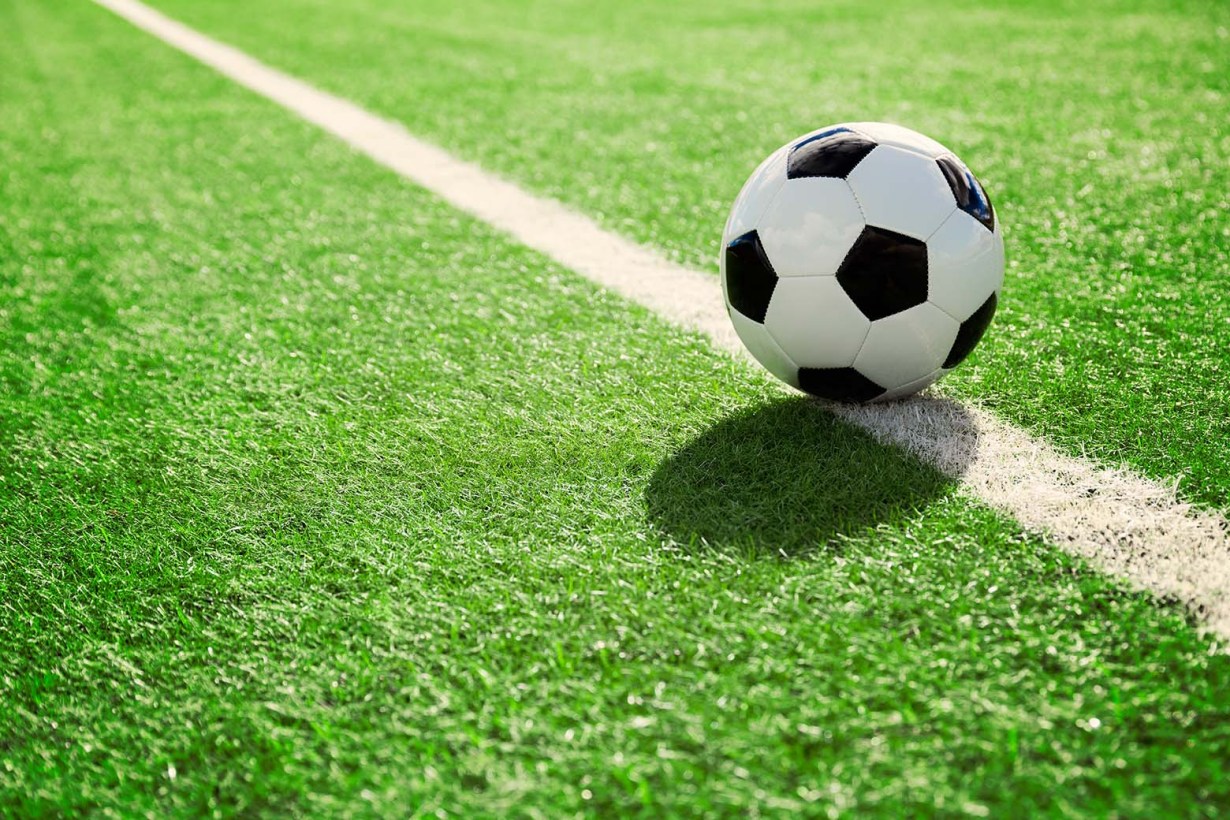 If you select a glow-in-the-dark ball, it may need one to four hours of exposure to a strong light to achieve the maximum glow.

Soccer balls are available in a few different sizes, and are differentiated based on circumference.

You might find an occasional novelty light-up soccer ball with a circumference smaller than 23 inches, but this is not common. The majority of Size 1 and Size 2 soccer balls are made as collectibles rather than to be used for play.

To approximate the feel of a regulation soccer ball, light-up soccer balls employ a few different cover materials, including polyurethane, polyvinyl carbonate, or synthetic leather. Some light-up soccer balls will have a rubbery material in parts of the cover, allowing for clearer visibility of the light inside the ball.

Like regulation soccer balls, illuminated balls consist of a number of panels sewn or glued together to create the round shape. Regulation soccer balls have had 32 panels (a mix of hexagon and pentagon shapes) for many years now, but manufacturers are testing newer designs all the time. Light-up balls, however, may have a number of different shapes or patterns printed on them, such as stars, swirls, or a honeycomb pattern, but the majority of illuminated balls follow the traditional hexagon and pentagon pattern.

Battery vs. glow in the dark

Most light-up soccer balls use battery power to activate LEDs inside the ball. This creates a glow from the inside that shines through some panels on the ball. Commonly, the batteries fit inside a tiny removable cylinder that slides inside a compartment near the inflation valve. You must replace these batteries when they expire. Expect to receive 20 to 40 hours of battery life from these batteries.

If the soccer ball doesn’t run on battery power, it probably has a cover material coated in phosphors. These soak up light from the sun and other sources, creating energy, then release that light to create a glowing phosphorescence.

A glow-in-the-dark soccer ball should provide a visible glow for one to three hours after you remove the light source. Some designs, though, see quite a bit of dimming after just 15 to 30 minutes.

Light-up soccer balls of the official Size 5 design still aren’t official game balls, in part because of the different weight distribution that their batteries cause.

Not truly light-up balls, some models use reflective material on the exterior that catches the light and reflects it back. This type of ball is usable in dark conditions, but it requires some ambient light, such as from a nearby street pole, to create the reflection that you can see.

Light-up soccer balls generate their glow in a few different colors, including red, orange, yellow, green, and blue. Typically, the color in the ball’s material determines the glow, not the color of the light source. 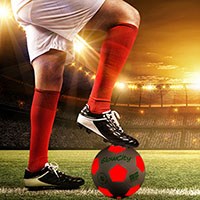 DID YOU KNOW?
As with any type of battery-powered device, leaving your light-up soccer ball exposed to cold weather will shorten the battery life.
STAFF
BestReviews

Pop-up soccer goals: PUGG 6’ Portable Goals
Set up a soccer game or practice session anywhere you have an open space when you bring along this pair of 6-foot portable soccer goals that fold up and fit in a carrying bag when not in use.

Soccer cones: Profect Sports Agility Cones
In addition to a pop-up goal, you will want portable cones like these on hand to set up the boundaries for the field of play. This set has 50 cones, which is more than enough to demarcate a field or practice areas.

Inexpensive: Light-up soccer balls generally start at less than $20. These may be balls that use lower-quality materials or are smaller than official Size 5.

Mid-range: The majority of light-up soccer balls will be in the $20 to $30 category. These are balls with a reasonable build quality, and buyers can expect them to last a while no matter how much they are used.

Expensive: The priciest light-up balls will be Size 5 models and have a build quality comparable to regulation soccer balls. These cost $30 on up, but few will exceed $50.

Although Adidas, Wilson, and Mikasa may be the most familiar soccer ball brand names, it is other manufacturers that typically make most light-up soccer balls. 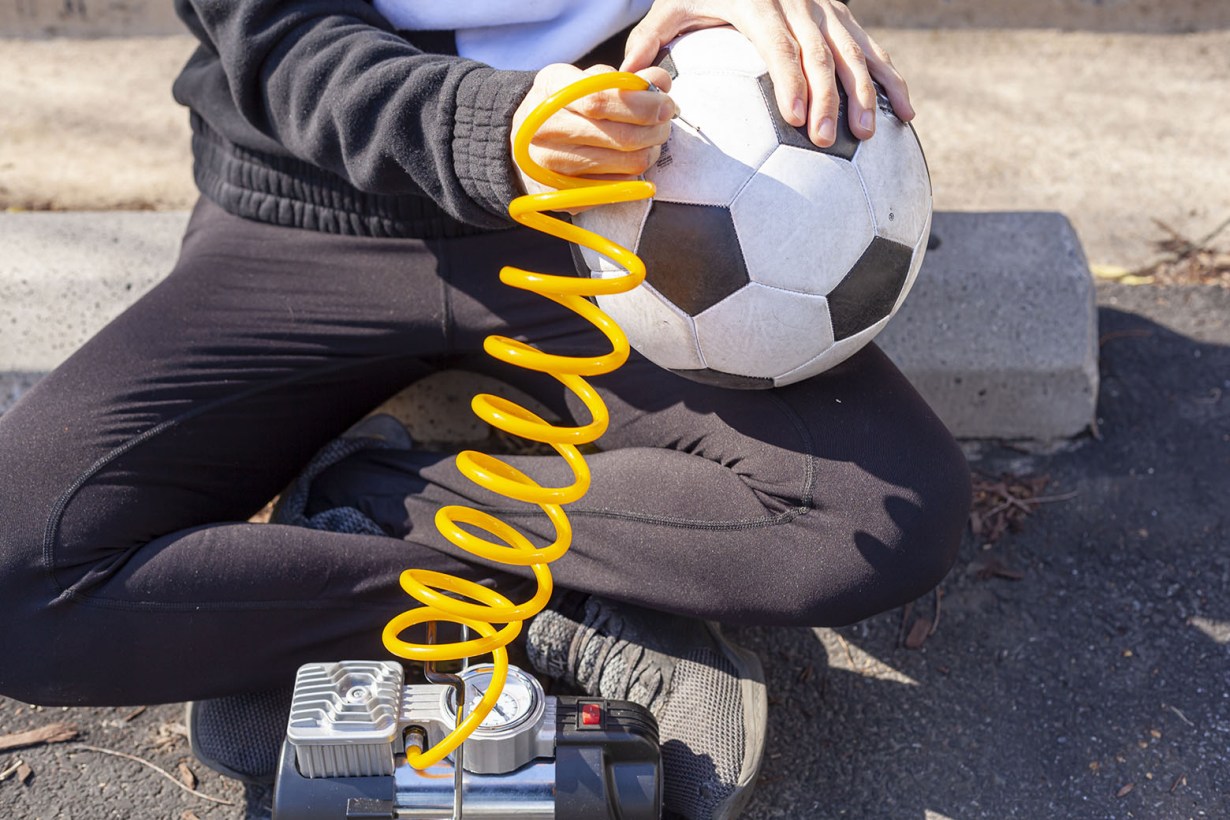 When inflating a light-up soccer ball, add air slowly to avoid overstressing the air bladder inside the ball.

Q. Do light-up soccer balls have an on/off switch?

A. No, but they use motion activation to light up when kicked. Depending on the model, balls usually remain lit for 20 to 40 seconds after the motion stops.

A. No. Often, these balls use watch-style batteries, so you’ll have to replace them when they’re exhausted. If you don’t like the idea of throwing away batteries regularly, look for a ball that glows in the dark after exposure to sunlight during the day.

Q. Are there any light-up soccer balls that would be appropriate to use for official games?

A. Not really. Some illuminated balls are of regulation size, but no official league would allow a light-up ball for games. Use these for recreational practices and games, or for a fun change of pace at night, rather than for serious game play. 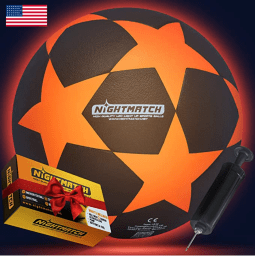 Best of the Best
Nightmatch
Light-Up LED Soccer Ball
Bottom Line
A glow-in-the-dark ball that sets up quickly and won't be damaged by water.
Shop Now 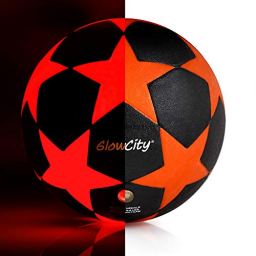 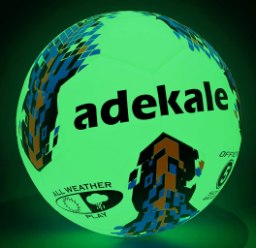 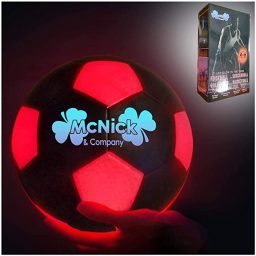 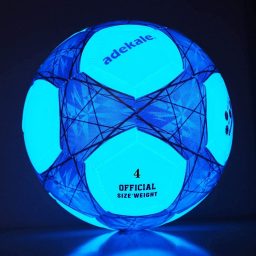 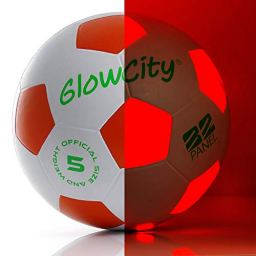 Top Pick
GlowCity
Light Up LED Soccer Ball
Bottom Line
This light-up ball is great for neighborhood games or practices that extend after dark. It's harder than a leather ball, so parents of young children may wish to try a different ball.
Shop Now 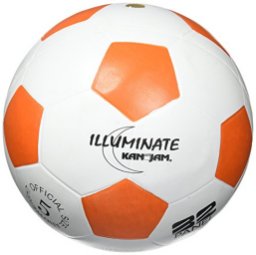 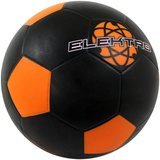 Top Pick
Baden
Elektro LED Light Up Soccer Ball
Bottom Line
While it's definitely not a pro ball, it comes from a real sports manufacturing company, and the quality is apparent.
Shop Now 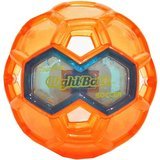 Top Pick
Tangle Creations
NightBall Light Up Soccer Ball
Bottom Line
Let the younger kids get in on the fun with this size 3 light-up soccer ball. Perfect for those ages 8 and younger.
Shop Now