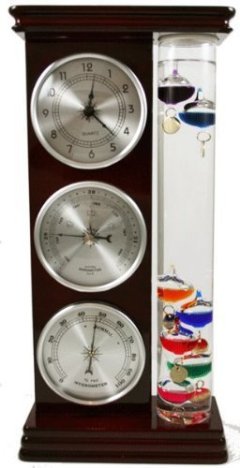 This thermometer is as functional as it is gorgeous.

More features than most competitors packed into a solid wood frame. The thermometer works well, as do the barometer and hygrometer. 14.5 inches tall.

The quartz clock can be loud. Some customers noted that theirs didn't keep time well.

Standard Galileo thermometer that is easy to read and has five spheres with great colors. Customers love that it makes for a good decoration as well as a good thermometer.

A few customers reported that the spheres remained at the bottom of the glass no matter the temperature. 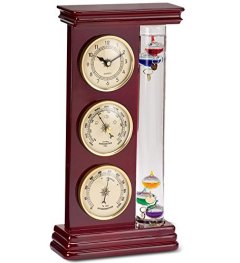 A beautiful, multifunctional piece that adds a fun element to watching the weather.

The quartz clock may be loud. 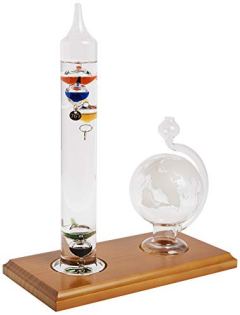 An eye-catching two-in-one thermometer and barometer.

The glass barometer and thermometer are mounted on a sturdy wooden base. This is a great choice for an office or classroom. At 8 inches tall, it's a smaller thermometer.

The glass is thin, making this more fragile than its competitors. 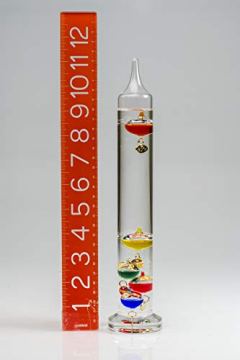 This all-glass design is very fragile.

Knowing the temperature is important, useful information; the means of gauging that temperature, however, can take a lot of forms. The Galileo thermometer, named for the famed Italian scientist, offers both functionality and aesthetics when it comes to measuring the temperature in a room.

The Galileo thermometer is a centuries-old device that measures temperature. It typically sits on a shelf or table and includes a glass cylinder filled with liquid within which are small glass bulbs filled with different colors of liquid. These bulbs rise and fall as the temperature changes. While it might take some time to learn to read the thermometer, it is a fairly accurate device that can add a bit of ornamentation and sophistication to any room.

The basic structure and components are the same for all Galileo thermometers, but there are various extras and additions that can influence the look and size of the unit. Our buying guide explains how the device works, its history and application, and how to find the right Galileo thermometer for your home. We’ve included a few of our favorites to get your shopping started too. 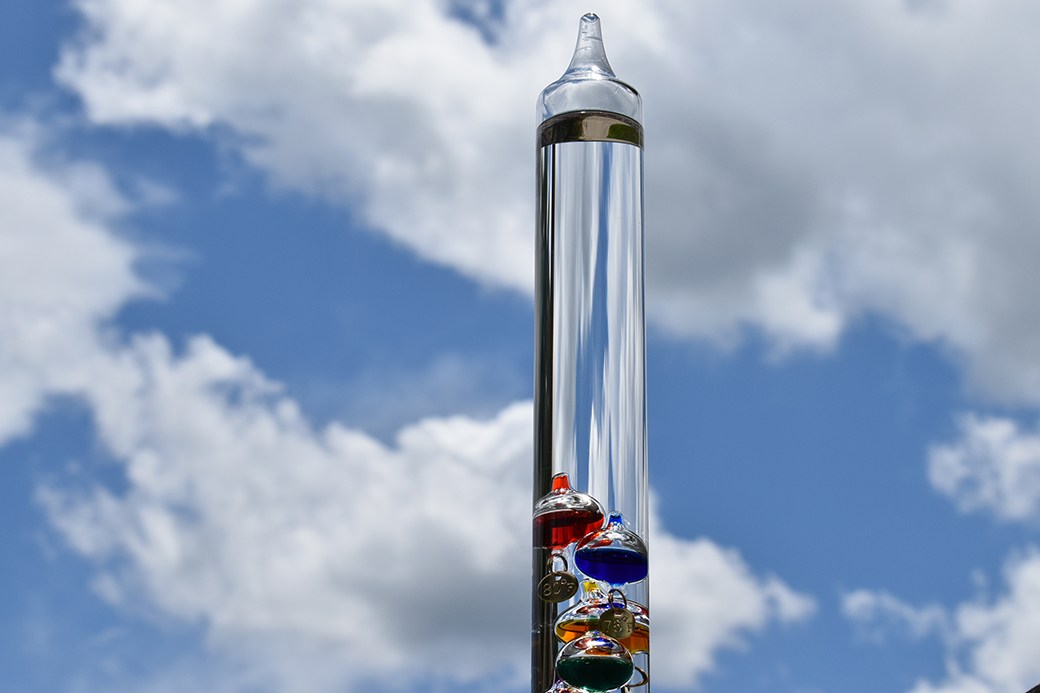 It’s possible to make your own Galileo thermometer at home. It requires a glass vase, sealed glass canisters, measuring equipment, and some careful scientific calculations.

The Galileo thermometer was invented in the mid-1600s, but not in fact by the prolific astronomer and engineer after whom it’s named. It was created by a group of academics at the Accademia del Cimento in Florence, Italy, an academy begun by students of Galileo. Their invention was inspired by him and named for him. Galileo is credited with the invention of the thermoscope, which tracked changes in temperature and laid the foundation for the modern thermometer.

The Galileo thermometer includes a glass tube filled with liquid. In the past, this was an ethanol mixture or even wine, but today it’s typically mineral oil. Inside the cylinder are several small glass bulbs, each filled with a colored liquid, either alcohol or water with food coloring. The bulbs are designed to have the same density.

Galileo thermometers vary in size, but this doesn’t affect their function. Size does affect where you can display the device and how it looks. Most are between 8 and 15 inches tall, though there are bigger ones, some as tall as 24 inches.

Most have a relatively small diameter with a glass base that isn’t much bigger than the cyliner. Others are built into a larger wooden frame that also includes other devices, such as a barometer or clock.

Galileo’s precursor to the thermometer had a crucial flaw. Since his thermoscope, or air thermometer, had an open tube instead of a closed one, it also measured barometric pressure, which influenced the temperature readings.

Larger Galileo thermometers that include more bulbs offer more precision. Some options have as many as 10 or more bulbs. The more bulbs, the wider the cylinder. And more bulbs offer greater precision and a wider temperature range, from as low as 60°F in some cases to 100°F.

Some Galileo thermometers are built into cabinetry that includes other devices, such as a barometer, hygrometer, and analog clock. These additional devices increase the size of the unit and the price.

Other Galileo thermometers are simply paired with a globe-shaped glass barometer that’s also filled with a colored liquid.

Some Galileo thermometers have a decorative base, often made of wood. The type of wood and finish vary, so you can match the thermometer to your décor.

Some options do not have a base and instead include a metal frame and hook or just a hook so the thermometer can be hung.

Most Galileo thermometers are tall, cylindrical tubes, but there are also some innovative options that are large spheres. These use the same principle but offer a significantly different aesthetic. The spheres may also be attached to a base or suspended by a stand, not unlike those with some glass whiskey decanters.

The liquid in the small bulbs is colored in order to add an eye-catching aesthetic to the unit, but the colors don’t affect the functionality or operation of the thermometer. Many have red, green, blue, and yellow bulbs, but others have less common shades. If you’re seeking a more modern look, there are Galileo thermometers that include bulbs filled with black liquid. 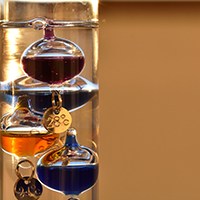 Mid-range: Most Galileo thermometers cost between $25 and $50, with options in terms of the number of bulbs, size, and additional devices or decoration.

Expensive: The largest and most elaborate Galileo thermometers cost over $50. These might include a variety of other devices and be impressive statement pieces.

Galileo Galilei was born in Florence in 1564 and is credited with a great many scientific inventions, innovations, and ideas in physics, astronomy, and mathematics. 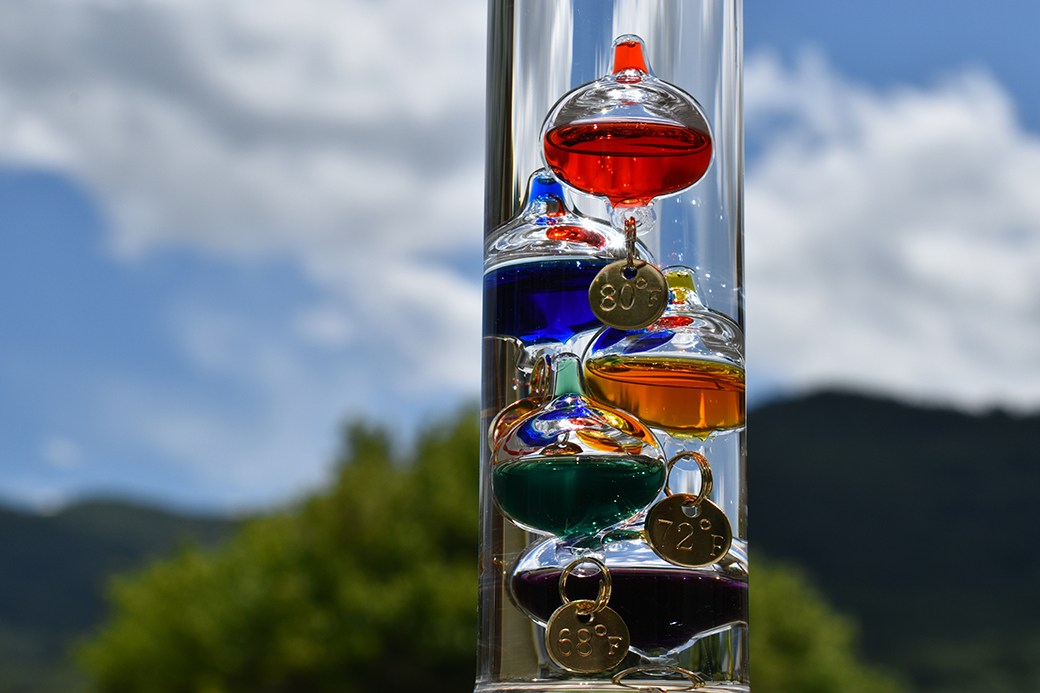 The Galileo thermometer functions on a basic principle of physics championed by Galileo: buoyancy. He challenged Aristotle, positing that whether or not an object would float depends on the corresponding densities of the object and the liquid.

Q. How do I read the thermometer if there’s no bulb floating in the middle of the unit?

Q. How precise is a Galileo thermometer?

Q. Can a Galileo thermometer be used outside?

A. While a Galileo thermometer can be used outside to measure the temperature, it should be done so with caution and only for a short period of time. It shouldn’t be left outside in inclement weather because the unit is relatively fragile and the liquids may freeze if the temperature drops low enough.

However, the thermometer only takes a few minutes to adjust to a temperature change, so you can take it outside for a reading. Set it on a table or hang it from a hook. Don’t hold it in your hands because your body temperature will influence the reading. The thermometer can also be submerged to determine water temperature, though this should be used for demonstrative purposes and not for accurate readings.

Best of the Best
Ambient Weather
WS-YG709 Galileo Thermometer, Barometer, Hygrometer and Quartz Clock Weather Station
Bottom Line
This thermometer is as functional as it is gorgeous.
Shop Now 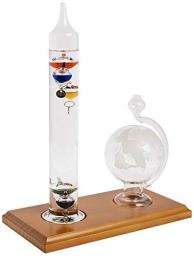 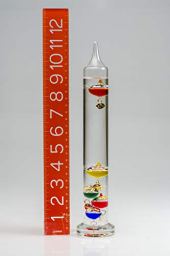