From the renowned crystal brand comes this pack of generously sized, lead-free tumblers.

Generous 11-ounce capacity. Double old-fashioned tumblers. Lead-free crystalline glassware retains look of crystal without expense and lead content. Each tumbler measures 3.3 by 3.75 inches. Elegant enough for cocktails but suitable for everyday use as well. Package of 4 comes in gift case. 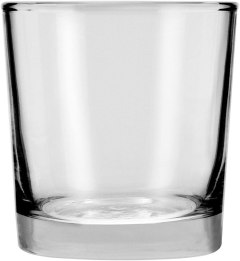 Stock up a bar affordably with this pack of 12 heavy-bottomed tumblers.

Large collection of 12 tumblers. Each holds 9 ounces of liquid. Measures 2 inches across by 3.5 inches tall. Heavy, weighted base for stability and heft. Simple, classic design is timeless and appropriate for all occasions. Dishwasher-safe.

Some buyers report inconsistent quality. May hold less in practice than listed.

Attractive group of four 8-ounce tulip glasses. Comes with wooden serving paddle. Designed for both strength and brilliance. Wide bowl for swirling and sublimation. Ultra-thin rim for ease of sipping. Stackable and dishwasher-safe.

Isolated reports of mispackaged or broken pieces during shipping.

These elegant tumblers are made from specially formulated glass for clarity and strength.

Comes with 4 tumblers. Each holds 9 ounces of liquid. Thin, elegant curved walls with heavy base for stability. Rims are laser-cut for smoothness and precision. Glass formulated for clarity, sparkle, and durability. Lead-free and free of heavy metals. Dishwasher-safe. 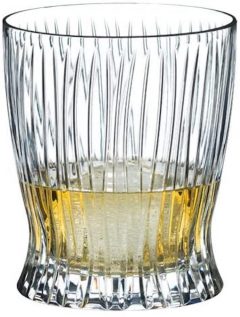 Designer style evokes flames and provides tactile sensation and grip. Made out of fine glass. Thick base for stability. Double-sized tumblers hold up to 10 ounces of liquid. Four inches tall. Appropriate for cocktails and entertaining. Dishwasher-safe.

Not made of crystal. Only 2 per package.

In order to get the most out of your drink — whatever you’re drinking — it’s worth investing in the appropriate glassware set. The size, shape, and texture of a glass may inform how enjoyable your beverage of choice is, allowing it to aerate, oxidize, stay cool, or be combined with just the right amount of ice, water, or mixer.

This is especially true of whiskey, a strong yet subtle liquor that needs the right glass to bring out its best. Whiskey is a distilled spirit made from grain mash, usually a combination of rye, corn, barley, or wheat. Yet, regardless of its mash or where it’s made, whiskey is invariably best had in a smaller glass where you can smell its aroma and add ice or mix if necessary.

Whiskey glass sets are the ideal choice for whiskey and spirits enthusiasts, but they do vary widely. So, which one is right for you? You'll want to consider the shape, material, and aesthetic appearance in order to choose which whiskey glass set you want to sip from. 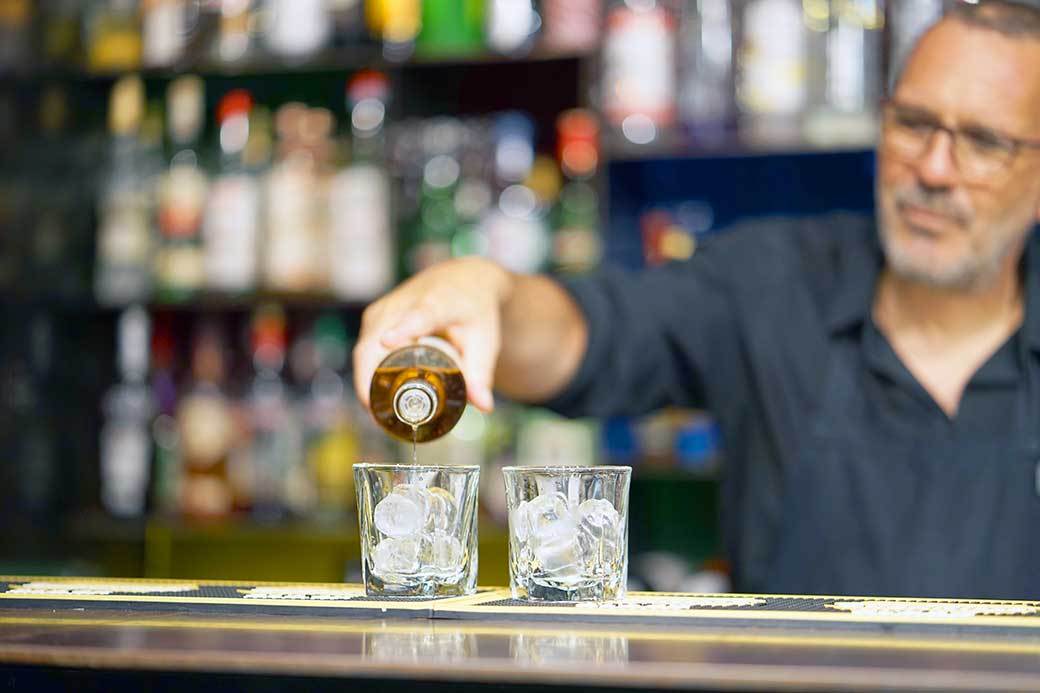 Sniff the whiskey a few times before taking the first sip. Keep your mouth open to fully embrace the aromas hidden within.

There are a couple of different options available when it comes to the shape of whiskey glasses. While you can indeed enjoy whiskey in any type of vessel, some are in fact better than others. A rocks glass or a tulip-shaped glass are among the most popular.

How many people may be drinking whiskey at any given time? Is the set just for you and a guest, or do you often entertain bigger groups? Most whiskey sets come with two or four glasses. As rocks glasses serve many purposes, it may be worth getting extra glasses if you’re also stocking up your kitchen.

To decant or not to decant?

Just as with wine, whiskey is sometimes decanted before serving to allow air to circulate through the beverage to enhance taste and aroma. The effect of decanting isn’t as pronounced with whiskey as it is with wine, but some whiskey drinkers swear that a little extra aeration is a good thing. Whiskey may taste a bit better in a few minutes after air touches it, as opposed to some wines, which will definitely taste better after a couple of hours.

For the most part, however, pouring whiskey into a decanter is about visual aesthetics more than taste. If you’re using a decanter, make sure it has an airtight seal and that it’s large enough to fit a bottle of whiskey — at least 750ml, generally. Also, while this is no longer an issue for most decanters, make sure there was no lead used in manufacturing the product.

For some, it’s not enough to feel good drinking whiskey — you want to look good as well. Whiskey has an aura of refinement, wisdom, and adventure to it. So, it’s no surprise that users want a set that looks distinctive, too. Crystal is especially popular, and glasses that may have a twist to them have a particular artistic flair when the glass is filled.

Consider where you will have the set when it’s not in use. Will it be regularly visible or tucked away? Make sure to think about the location, the look of other glass and drinkware you have, and who’s going to be taking in the scene.

Expert Tip
One of the most popular whiskey drinks is an old fashioned. It requires bitters, simple syrup, and an orange slice.
STAFF
BestReviews

Some specially designed whiskey glasses will have both an inner and an outer layer of insulated glass. The inner layer holds the whiskey and may have an angular shape to increase the rate of oxidation. The outer layer of glass is made to be held comfortably, and the separation of the two layers means that the whiskey won’t warm in your hands. This is vital for those who like to sip their drink slowly and savor the flavor.

Whiskey drinkers tend to enjoy a single, large cube with their drink. A super-size cube allows for the whiskey to be chilled quickly without rapidly melting and thus watering down the drink. Some whiskey glass sets include an ice mold.

Whiskey tends to be branded with rustic or rugged connotations, which is why whiskey glass sets are often sold in wooden boxes. The box serves as a storage option and a decorative display container that often includes ornate designs or engraving.

"When referring to a liquor made stateside or in Ireland, it’s “whiskey.” However, in Europe and beyond, you’ll find it spelled “whisky.”"
STAFF
BestReviews

Whiskey stones: R.O.C.K.S. whiskey chilling stones
For those who like to take their time drinking whiskey but also enjoy it chilled, whiskey stones are essential. They are chilled trinkets to drop in your whiskey, but they won’t melt and water down the flavor. We like this inexpensive, quality set from R.O.C.K.S.

Whiskey barrel: American Oak Whiskey Aging Barrel
For the connoisseur, you may want to consider an aging barrel, which helps store and improve your whiskey. It also adds a terrific aesthetic touch to your bar area, especially this one from American Oak that comes with personalized engraving.

Bar set: Tiger Chef Cocktail Bar Tool Set
Whiskey is an essential component of countless fabulous cocktails, and in order to make those fancy drinks, you’ll need a comprehensive bar set. This one from Tiger Chef features all you need, including a shaker, strainer, and muddler.

Ice mold: Classic Kitchen Ice Ball Maker
If you don’t fancy whiskey stones, but still want the appropriate ice cube for your whiskey, you’ll need to find the right size model ice mold. This ice ball maker from Classic Kitchen is perfect for drinking whiskey neat or with a mix.

Inexpensive: For under $25, you can find simple whiskey glass sets that may include up to four glasses, though likely not with a decanter. These sets often have an elegant look but come with few extras.

Mid-range: Whiskey sets priced between $25 and $50 will likely include plenty of features, such as a decanter, whiskey stones, and perhaps a polished wooden box.

Expensive: At over $50 in price, high-end whiskey sets will likely feature four glasses and a decanter with a distinct and refined look. These sets will appeal to serious whiskey connoisseurs who crave tasteful visual aesthetics as much as they enjoy the taste of whiskey.

Expert Tip
Adding a splash of water to your whiskey can vastly improve it! A little bit is said to release aromas and heighten taste.
STAFF
BestReviews 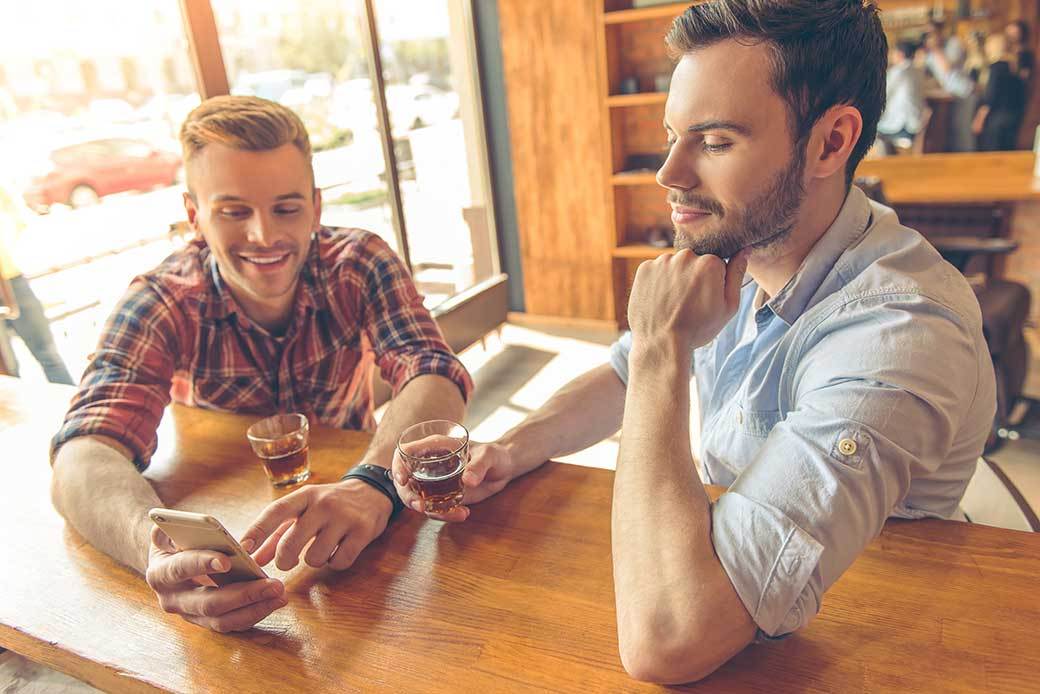 Whiskey glass sets make decorative and versatile gifts that can be used for many different kinds of drinks, not just whiskey.

Q. How long can whiskey last in a decanter?
A. Whereas wine may likely only last a couple of days, whiskey won’t react dramatically when it comes into contact with oxygen. That means when you pour from the bottle into the decanter, you still have plenty of time to properly enjoy the drink. In a decanter, just like in an opened bottle, the whiskey can last years without significantly changing the taste — provided there is an airtight seal. Without an airtight seal, a whiskey’s flavor may turn in a few months.

Q. Can I use the set for other liquors?
A. Whiskey sets will work well with other liquors in practical terms, as most liquors are easily enjoyed in rocks or tumbler glasses, and they can be used in a decanter as it has little effect on the drink itself. However, the aesthetic may be odd. Whiskey is enjoyed in a decanter and crystal glasses in particular because of how its rich, golden color looks within. Vodka, for example, wouldn’t have the same effect as it is clear, though some tequilas or rums may enjoy a decorative appeal similar to that of whiskey.

Q. What’s the difference between whiskey, scotch, and bourbon?
A. These drinks are often used interchangeably, on purpose or by accident. They are related liquors, though those who enjoy them will loudly proclaim the differences and extol the virtues of their favorites. Bourbon, scotch, and rye are types of whiskey, and the difference has to do with the type of mash used and the geographic location they hail from. Scotch is from Scotland, while bourbon is made in the United States, derived mostly from corn. Rye whiskey, as the name suggests, is made from mostly rye mash. 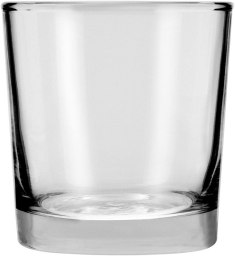 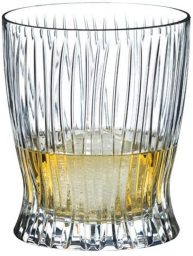 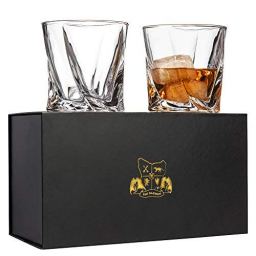 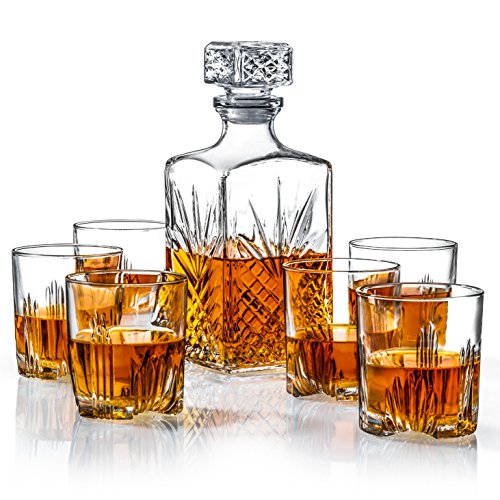 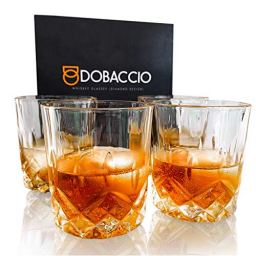 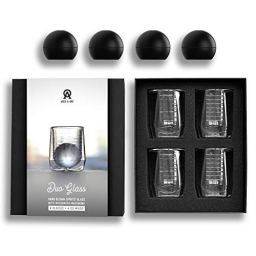 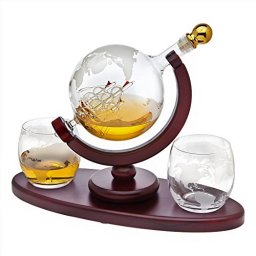 Top Pick
Godinger
Whiskey Globe Set
Bottom Line
Unique design and quality glass is perfect for regular use, or as a beautiful display in your home.
Shop Now