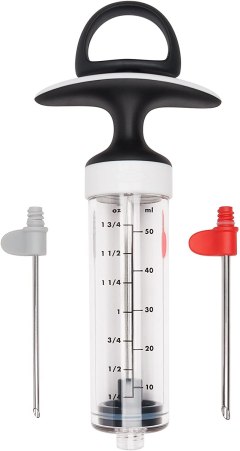 If you're looking for an all-around model that's easy to use and clean, try OXO's.

Made of food-grade Tritan plastic. BPA-free. Needles are easy to attach or detach even with greasy hands. Comes with thick and thin needles. Grip and plunger are comfortable and easy to use from any angle. Fully disassembles for cleaning.

Doesn't come with a case or other extras. 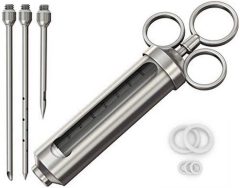 This marinade injector comes with 3 different needles and a storage case.

Interior of injector is plastic. Some durability issues. 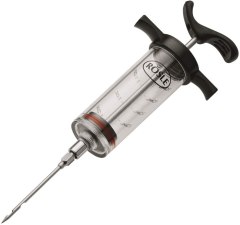 A sturdy option from a well-respected grilling brand based in Germany.

No additional needles. No accessories. 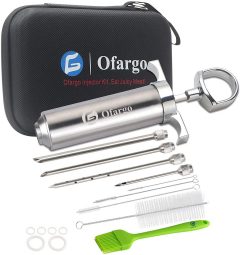 This stainless steel product comes with a plethora of accessories. 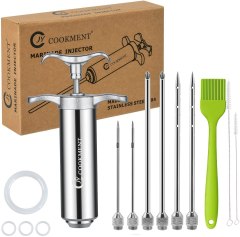 Another stainless steel kit that comes with a total of 6 needles.

There are plenty of ways to make sure your favorite meat dishes are as flavorful as possible. Spice rubs and liquid marinades can both be quite effective, but they don’t infuse the meat with flavor all the way through. With a marinade injector, you can make sure your favorite marinade penetrates the meat in its entirety for a flavorful, moist meal.

Our handy shopping guide can help you find the best marinade injector for your kitchen. Read on for more information and prepare for some tasty main dishes in your near future. 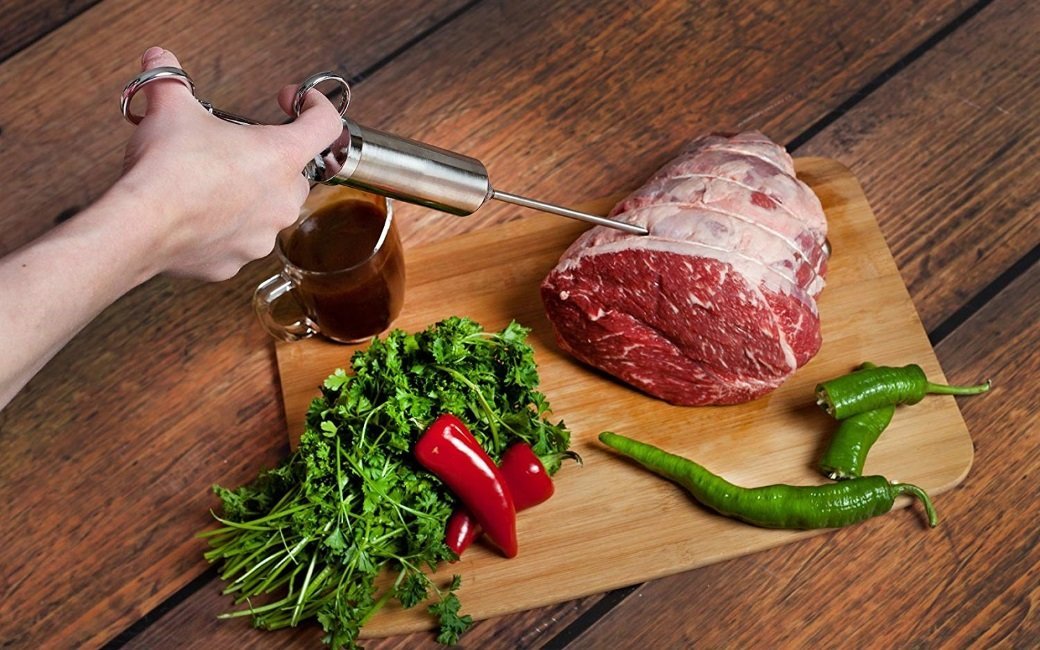 What it’s made of

It’s important for a marinade injector to be sturdy and durable because some cuts of meat are thick and tough.

Many budget-friendly marinade injectors are made of plastic. If you opt for a plastic model, be sure to choose one made of food-grade plastic so you can trust that it’s safe to use with your favorite recipes.

While plastic marinade injectors can work well for a while, they don’t offer the best durability and longevity. If you want a model with the longest lifespan, opt for a stainless steel marinade injector. You’ll pay more, but this kitchen tool is also likely to last longer.

How much it holds

The size of the barrel is another important consideration. Most marinade injectors have a capacity of one to two ounces, although some can hold more.

A one-ounce marinade injector works well for small pieces of meat, but you have to take care not to overfill the barrel, as excess pressure inside the injector could damage the needle. If you opt for a smaller barrel but are preparing a large cut of meat, you may need to refill the injector with marinade once or twice.

For most kitchens, a two-ounce marinade injector is the best option because it works well for large cuts of meat and you can just fill it to half-capacity if you’re flavoring a smaller piece. If you routinely cook extra-large cuts of meat, however, you may want to look for a barrel that holds more than two ounces.

Most marinade injectors include at least two needles. One of the needles usually has holes along the sides; the other does not. The needle with holes is designed for use with thicker, chunkier marinades, while the solid needle is suitable for use with liquid marinades.

The size of the needles is an important feature to consider. Narrow needles that are approximately three inches in size are effective if you’re injecting liquids into your meat. If you want to use a thicker marinade with minced herbs, however, a thin needle could get clogged. In this case, a six-inch needle would work best. For the most versatility, opt for a marinade injector with needles in different sizes to be sure you can accommodate any marinade you like.

A marinade injector plunger should have a tight seal, so the marinade doesn’t leak when you press down on the plunger to inject your meat. Often, there is a silicone O-ring that forms a secure seal between the plunger and the barrel. Over time, it is normal for an O-ring to break down, which can cause the marinade to leak. Choose a marinade injector that includes spare O-rings so you can easily replace a faulty ring.

Many marinades are oil-based, so cleaning the injector can be challenging. Opt for a model that comes apart easily so you reach all nooks and crannies where marinade residue may hide. You may also want to look for an injector with dishwasher-safe components that you can wash on the top rack of your dishwasher rather than by hand.

Some marinade injectors include accessories that make it easier to use or maintain the injector. Many models include a storage case or box that can protect the injector when it’s not in use. Some injectors come with a cleaning brush, a basting brush, and a recipe booklet.

Did you know?
To make sure the marinade is fully dispersed throughout the meat, let the food rest for 30 to 60 minutes after injecting it before you cook it.
STAFF
BestReviews

Marinade injectors vary in price based on material, barrel size, number of needles, and other accessories. Most range from $5 to $55.

The most affordable marinade injectors are made of plastic with a barrel capacity of one to two ounces. They may include one or two needles and a storage box or cleaning brush. They usually cost between $5 to $15 and can work well if you’re on a tight budget.

The most expensive marinade injectors are made of stainless steel and usually have a barrel size of two to four ounces. Two to four needles are usually included, as well as accessories such as a storage box, cleaning brush, basting brush, and/or recipe book. They usually cost between $30 and $55.

"You don’t have to get fancy with the marinades you use in your injector. Broth, melted butter, olive oil, hot sauce, soy sauce, whiskey, and honey are tasty options that don’t require any mixing."
STAFF
BestReviews 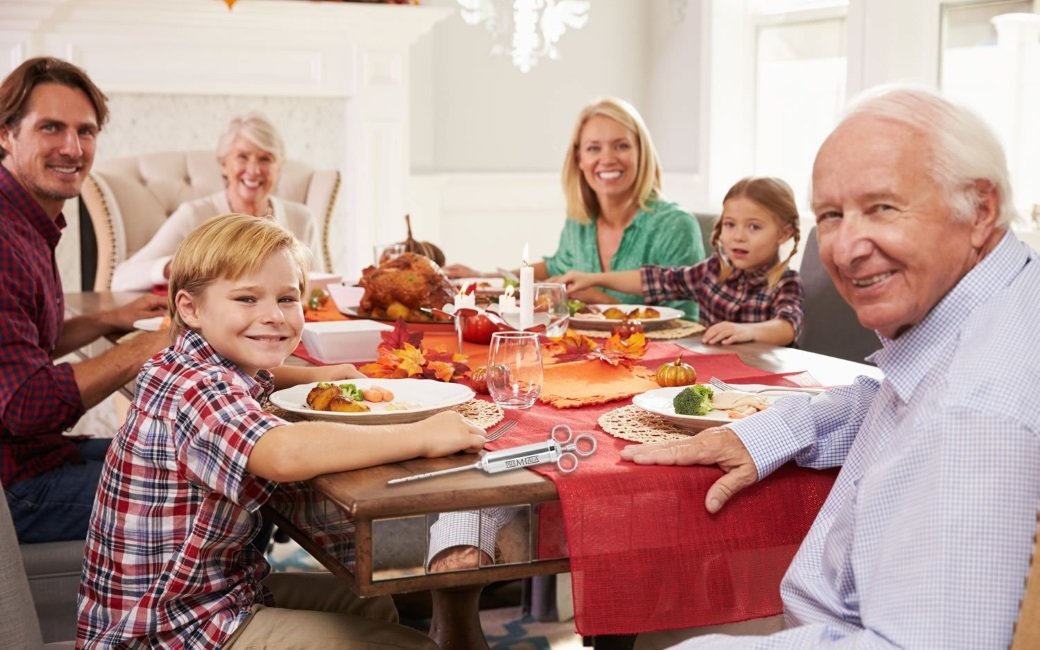 Marinade injectors aren’t just for meat dishes. You can also use this tool to inject marinade or other liquids into vegetables before grilling or roasting.

Q. How do I clean a marinade injector?

A. If your marinade injector has dishwasher-safe components, you can simply take it apart and wash the parts on the top rack. For injectors that must be washed by hand, take the entire injector apart. Soak all parts in hot, soapy water for 10 to 15 minutes. Then, scrub all the nooks and crannies with a bottle brush. Rinse the injector pieces, dry them thoroughly, and reassemble the marinade injector before storing it.

Q. Can I use a marinade injector with foods other than meat?

A. Yes. Many people use a marinade injector with baked goods like cream puffs and eclairs. The injector makes a much smaller hole than a pastry bag, so you don’t have to worry about the baked good falling apart.

Best of the Best
OXO Good Grips
Flavor Injector for Meat & Poultry
Bottom Line
If you're looking for an all-around model that's easy to use and clean, try OXO's.
Shop Now 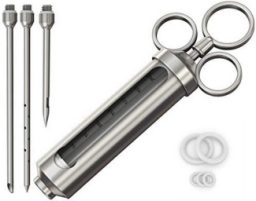 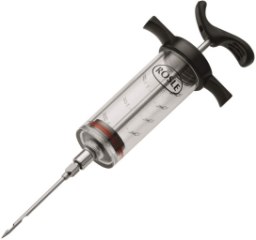 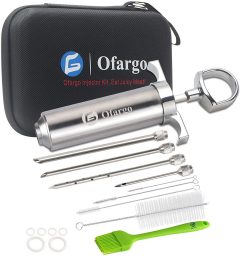 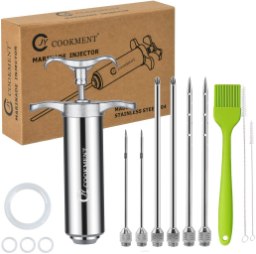 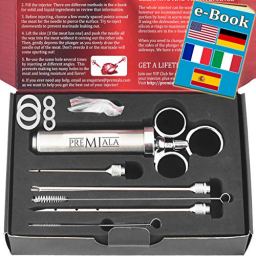 Top Pick
PBKay
Stainless Steel 2 oz. Seasoning Injector
Bottom Line
Built to last for several generations – unlike a plastic model. Some consumers find it challenging to clean, but it's solid in the hand and easy to control.
Shop Now 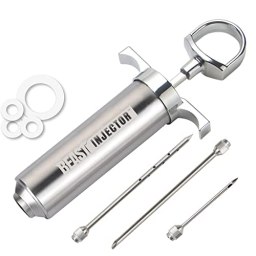 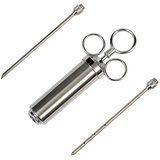 Top Pick
GrillHogs
Stainless Steel with 2 Marinade Needles
Bottom Line
One of this marinade injector's best features is its affordable price point. For the same price as a unreliable plastic injector, owners get the strength and needle depth of a stainless steel model.
Shop Now

Top Pick
Bayou Classic
2 oz. Seasoning Injector with Marinade Needles
Bottom Line
Heavy-duty enough for really tough meat, such as wild game and larger fowl. Plunger can be challenging to push, so we do not recommend it for those with hand strength issues.
Shop Now