Stainless steel blade is sturdy, durable, and can be removed to be put into the dishwasher. Has a one-touch safety lock and easy-release blades. Ergonomic, nonslip handle. Comes from a trusted kitchenware brand.

The casing can get warm with lengthy use, but this shouldn't affect quality.

A variable speed feature would have been appreciated. 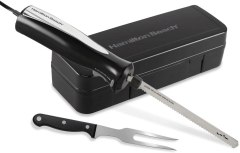 A good choice for budget-minded consumers; has quality features for a value price.

Stainless steel blade glides through meat and poultry and is easy to remove and clean. Comes with a carving fork and storage case. Handle is one of the better-designed ones in the world of electric knives. Many consumers say it's ideal for cutting artisan breads.

Some say that the on-off button is awkward to use. Handle diameter is a bit too large for some people.

This a powerful and easy-to-master electric knife is the best option for light crafting, according to our cooking expert.

Excellent for evenly slicing bread and meat. Lightweight. Quick to assemble. Handle has a stable grip and an ergonomic design. Features a simple one-touch control. Has a stainless steel blade. Comes at an affordable price point.

It would be nice if the blades were just a little longer. 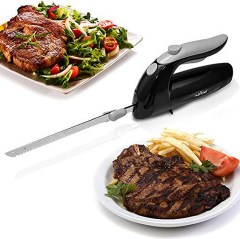 Designed for carving up meat, this electric knife is popular among customers for its removable blades and powerful cuts.

Serrated blades slice through textured foods and meats with ease, making this a great choice for Christmas dinner. Simply shut off the knife and remove the blades for straightforward cleaning. Ergonomic handle leaves plenty of room to maneuver the knife safely. Lightweight and stain-resistant.

Blades aren't as long as some users would prefer.

For anyone who regularly cooks whole turkeys, chickens, or roasts, a good kitchen knife is a necessity. You may want a traditional blade that easily cuts through the meat, and allows you to slice it as thin or as thick as you like it. If you’re not very confident in your knife-wielding skills, though, an electric knife can be a better option than a more typical blade. They slice through meat quickly and easily, with little effort from you, so you can carve up dinner in no time.

But choosing an electric knife can be a little tricky. You have to know the right features to look for in the blade, handle, and motor, to ensure you purchase a knife that gets the job done. 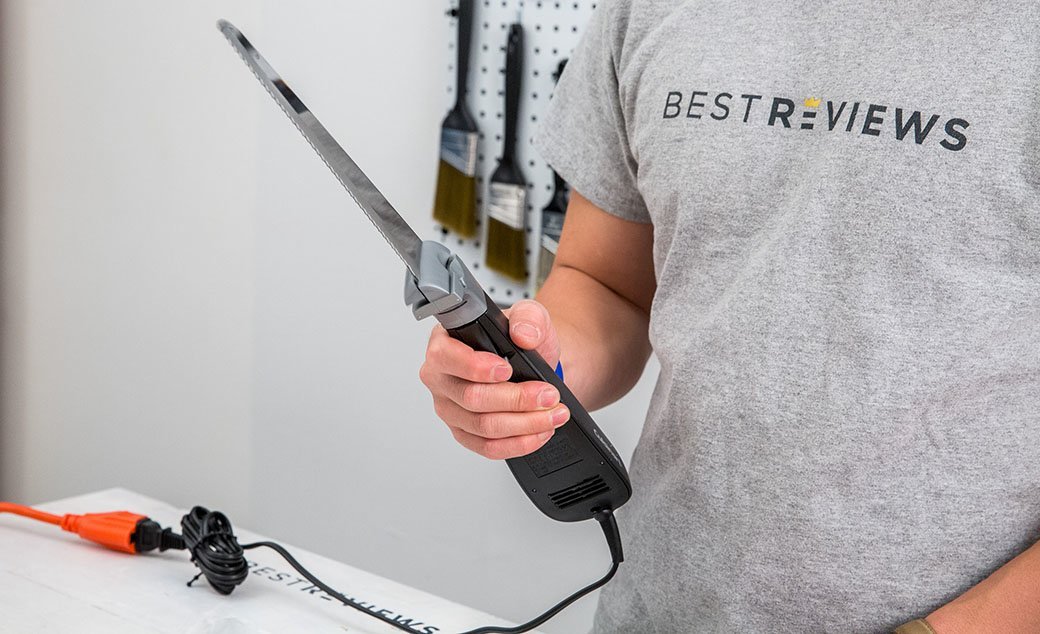 The first electric knife was invented by Jerome L. Murray in 1964.

How does an electric knife work?

Most electric knives feature two serrated blades that are clipped to one another.

When you turn on the knife, a motor in the handle causes the blades to move in a continuous, lengthwise sawing motion that cuts through meat and other foods quickly and efficiently.

Expert Tip
Electric knives can help those with wrist issues slice more easily, but keep in mind that electric knives are generally heavier than traditional knives thanks to the motor.
Andrea Boudewijn
BestReviews Cooking and Baking Expert

Who needs an electric knife?

While electric knives can cut a variety of foods, they work especially well with meat and bread.

If you often cut turkey, chicken, roasts, or loaves of bread in your kitchen, you’ll likely benefit from an electric knife.

However, even if you only cut meat and bread occasionally, you may benefit from an electric knife if you have arthritis or other hand issues, because you don’t need to apply as much pressure or force when you use one.

Electric knives are available in both corded and cordless models.

Corded models must be plugged into an outlet for operation, which may limit the locations where you can use the knife.

If you’re interested in a corded electric knife, opt for one with a swivel cord that’s at least three feet long. You’ll have much more maneuverability when you’re slicing.

Cordless models operate on batteries, so you can use them anywhere. Some cordless electric knives are rechargeable, which allows you to plug them in for charging.

Expert Tip
Look for an electric knife that has at least 100 watts of power to help with tougher cutting jobs, like that deliciously crunchy sourdough.
Andrea Boudewijn
BestReviews Cooking and Baking Expert

Most electric knives feature different types of interchangeable blades. You can remove one and replace it with another depending on your slicing task. For the most versatility, look for a model that includes a carving blade for meat, and a slicing blade for bread.

For the most effective knife, look for blades that are at least seven to nine inches long. Longer knives offer increased flexibility around bones and other tough sections of meat.

To ensure the knife’s durability, choose a model with stainless steel blades, which don’t tarnish or warp over time.

Because the motor is housed in an electric knife’s handle, it can vibrate quite a bit during operation. In some cases, it can hurt your hand.

For the most comfortable knife, look for a model with an ergonomically designed handle that fits your hand’s contour.

Depending on the type of food that you’re cutting, you may want to vary the knife’s speed.

Choose a model with variable speed control, so you can increase or decrease the speed to get the exact type of slices that you want.

Many electric knives come with a carving fork, which allows you to secure the meat that you’re cutting for easier slicing.

Some also include a storage container to place the knife in when you put it away. It may be a case or a block-style container that makes storage safer for both questing fingers and the knife itself.

Because of the motorized blades, an electric knife can be slightly more dangerous than a traditional knife.

To avoid accidents, look for a knife with blade safety locks. These keep the blades from moving accidentally when you’re handling the knife.

It also helps to have a safety button that allows you quickly turn the knife off when you’re using it.

Electric knives vary in price based on the type, blade heads, and accessories, but you can typically expect to pay between $15 and $170.

For a basic electric knife —  a single blade head and no storage container — you’ll usually pay between $15 and $20.

For a basic electric knife that comes with a storage case and carving fork, you’ll usually pay between $25 and $40.

For an electric knife that comes with at least two blade heads, a storage case, and a carving fork, expect to pay between $45 and $70.

For an electric knife that comes with three or more blade heads, a storage case, a carving fork, and other accessories, prices run between $85 and $175. 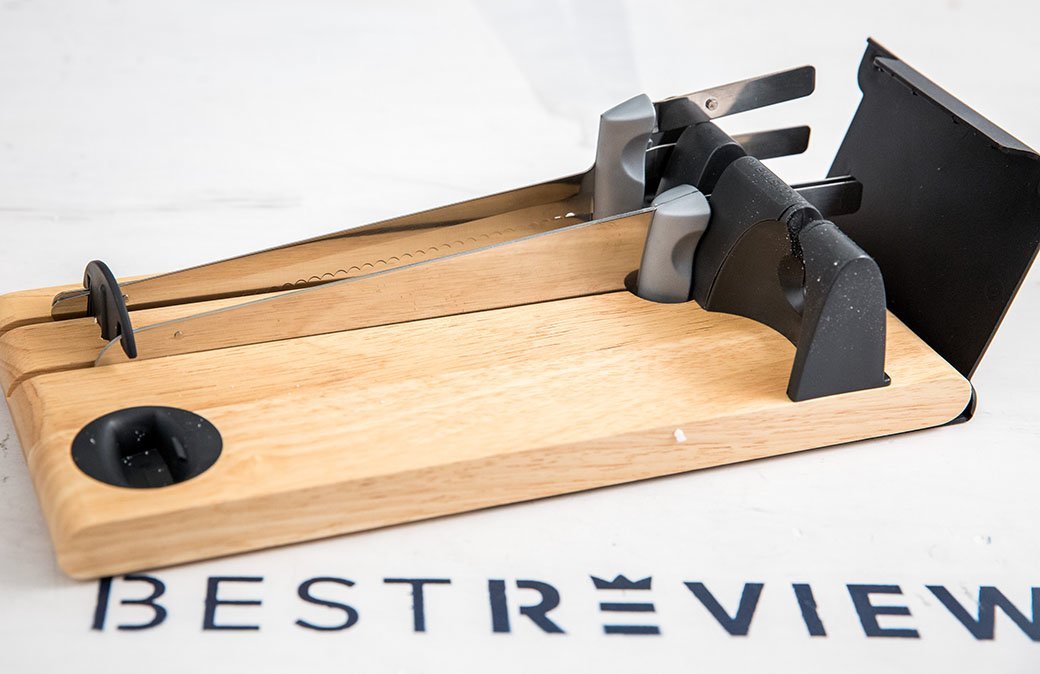 While electric knives are used primarily to cut meat and bread, you can also use them for slicing hard fruits and vegetables.

Q. Do you need to sharpen an electric knife?

A. Electric knives usually have a serrated edge, and tend to stay sharp longer than traditional blades. That’s why some manufacturers don’t recommend sharpening them. However, other brands do encourage using a sharpening rod to sharpen the blades when they begin to dull. Consult your owner’s manual to determine whether sharpening is appropriate.

Q. What safety measures should you use with an electric knife?

A. Until you’re absolutely ready to carve with the knife, make sure that it’s locked so it doesn’t accidentally turn on before you’re ready. As with a traditional knife, you should keep your fingers away from the blades.

Q.  How do you clean an electric knife?

A.  Most electric knives feature removable blades, so disassemble the knife and wash the blade by hand with warm, soapy water. Manufacturers typically don’t recommend washing the blades in the dishwasher, but consult your care instructions to see if it’s possible. To clean the handle and motor unit, wipe it down with a damp cloth and dry thoroughly.

Best of the Best
Cuisinart
Electric Knife
Bottom Line
An excellent electric knife at a reasonable price that is packed with useful features.
Shop Now 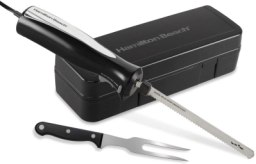 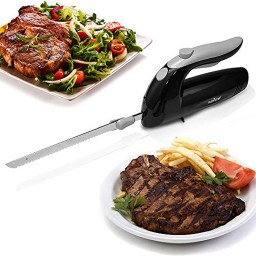 Top Pick
American Angler
Pro Electric Fillet Knife
Bottom Line
It's a very solid filet knife, but if you are looking for a more versatile tool, you may find yourself limited.
Shop Now