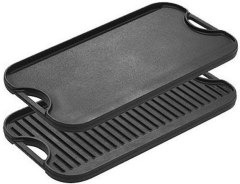 Large, versatile surface is useful for many types of cooking.

Large 20 inch by 10.5 inch cooking surface. Great for high-volume cooking. Works as a baking pan and grilling surface. Reversible sides for versatile use. Pre-seasoned out of the box to get started quickly. Oven safe and compatible with all stove types.

Some reports that it takes a long time to reach desired temperatures.

Despite a smaller size, it's well made and comes in a practical style with a value price. 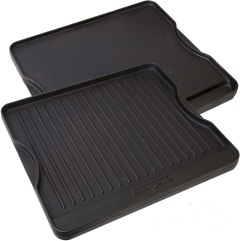 Has both flat griddle and grill side. Reversible surface without need for extra space. Fits most standard burners. Gripping on sides for transport. Compact 14 inch by 16 inch size is great for smaller stove tops.

Protective surface layer came off for some users. 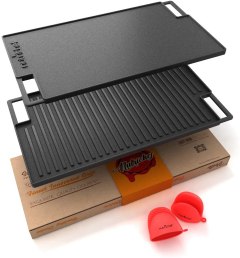 This reversible stovetop grill will improve your cooking game and look good doing it.

Large 18-inch surface. Cast in durable iron metal with an easy-to-clean non-stick surface. Safe for temperatures up to 480 degrees fahrenheit. Suitable for use with gas, electric, and induction stoves. Dishwasher safe and comes with 2 silicone mitts for safe handling.

This griddle does not have a drainage area for grease.

Good for anyone who prefers a large cooking surface; otherwise the weight and size don't justify paying the higher price.

Stands out for its spacious surface that makes it handy for preparing large volumes of food. Pre-seasoned and reversible. Pronounced lip holds onto drippings.

Heavier than most, which is both a testament to it's craftsmanship and feature that makes it awkward for some to use. On the higher end of the price scale.

Buying guide for Best iron griddles Skillets vs. griddles Griddle materials What to consider when choosing a griddle Safety add-ons How to season a cast iron griddle FAQ

Imagine how long it would take to get served if the short-order cooks at the diner did everything in pans instead of on a griddle. You’d be waiting for an hour instead of 10 minutes for your meal. Short-order cooks know how to cook for a crowd: on a griddle. When you’re tasked with making pancakes for a gaggle of kids or frying up a dozen hamburger patties for a rained-out cookout, you should follow their lead.

Home griddles have been around for years, and for a good reason: they work. In fact, the more you use an iron griddle, the better it works. You simply set your griddle over a burner or two, and you have a cooktop to rival the Waffle House. Although griddles remain fundamentally simple and unchanged, there is still a lot to consider when purchasing one. Which griddle would best suit your culinary needs? That’s where we come in. 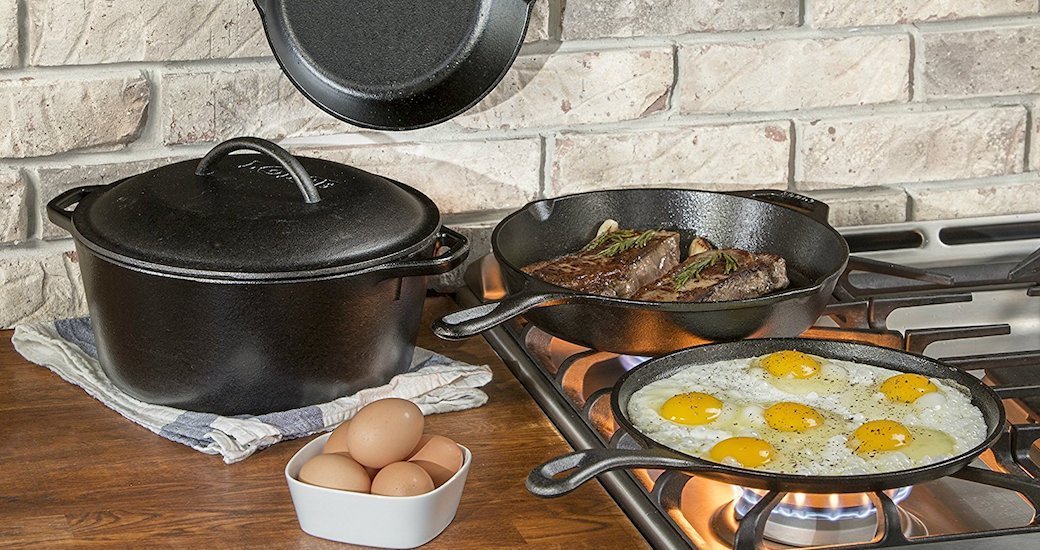 The Lodge company has been making cast iron cookware like griddles since 1896.

Size matters – especially when you’re cooking something like pancakes, the quintessential griddle food, for a fairly large group of people. Griddles, particularly the larger ones that fit over two burners, give you more room to work with, so people get fed faster.

Plus, since most griddles are basically flat (unlike skillets), there’s no edge to impede the chef from flipping, scattering, or maneuvering like a true maestro.

What’s more, the sloped sides of a skillet hold in moist air. Without those edges, a griddle gets a better crust on food made from watery or moisture-rich ingredients. Think of crispy, golden-brown hash browns and the aforementioned pancakes.

Expert Tip
Cast iron can be heavy. Consider storing it near the stove in a higher spot or on the stove to allow for easy access.
Andrea Boudewijn
BestReviews Cooking and Baking Expert

When most cooks think of griddles, they picture cast iron – and for good reason. Cast iron, once warmed up, retains heat better than almost any other material. This is great if you’re looking to cook something fast on a super-hot surface.

The biggest drawback to using a cast iron griddle is the cooldown time. The griddle gets so hot and releases heat so slowly that if you’re not careful, cleaning up could be a finger-charring experience.

Griddles made from anodized aluminum heat up quickly and maintain consistent heat fairly well. They’re lighter than their cast iron counterparts, but they’re also much less durable. They can warp over time, which makes it difficult for the griddle to sit flat on the cooktop.

Anodized aluminum has the advantage of being nonstick, but the coating can flake or peel off if you’re too rough when cleaning the surface.

Basic nonstick aluminum griddles have one major selling point: price. But they’re less expensive for a reason. They’re much thinner and lighter than even anodized aluminum griddles, but they don’t typically retain heat as well.

Uneven cooking is a common problem with nonstick aluminum products, and they’re notorious for warping. Griddles made with cast aluminum tend to be more durable, but they still tend to cook unevenly. The same goes for ceramic griddles.

Expert Tip
Don’t ever let cast iron sit wet. Wash it, dry it, and then set it in place on the stove with heat on to warm it up and evaporate any remaining dampness.
Andrea Boudewijn
BestReviews Cooking and Baking Expert

What to consider when choosing a griddle

The last thing a cook wants is a griddle that won’t stay put. Choosing one with a heavy, flat bottom will keep it from sliding off the burners at inopportune times, like when you’re flipping a pancake … or when you accidentally bump the stove.

While aluminum griddles need only to be washed, cast iron griddles require much more care and patience; you can’t just soap it up in the sink and set it out to dry.

For tip-top performance, cast iron needs to be seasoned regularly – any time it looks dull or muddled. This means baking oil into the cast iron to prevent rusting. See our “How to Season a Cast Iron Griddle” section for more details.

"You can use your oven-safe cast iron griddle as a pizza stone. You’ll get a perfectly crisp crust every time."
STAFF
BestReviews

Cast iron is heavy; there’s no getting around it. A cast iron griddle can be a pain to move around the kitchen, from the cabinet to the stovetop, from the stovetop to the sink, and back to the cabinet again. But they’re also basically indestructible; many are passed down from generation to generation as a sort of family heirloom.

However, if you’re not the strongest person, or if you have smallish hands, you might want to consider another material. Anodized aluminum griddles feel sturdy despite their lightweight construction, so one of those might be a good option.

Don’t underestimate the value of good griddle handles. You’re probably going to be moving your griddle around a lot, and strong, comfortable handles will make it much easier. Cast iron handles are certainly tough, but they also stay hot for a long time. Metal handles aren’t as sturdy and have the same problem with retaining heat.

Some griddles offer heat-resistant handles in the shape of loops. While these won’t burn your fingers, they might not be hardy enough to easily move the heavy griddle around your cook space.

Did you know?
Griddles are great for campfire cooking. In fact, they can be used with almost any heat source.
STAFF
BestReviews

Like nearly every other kitchen tool, griddles have been “upgraded” in recent years with unique features, and some of them are quite useful.

These add-ons might not make you a better cook, but they’re worth looking into if you’re concerned about safety. 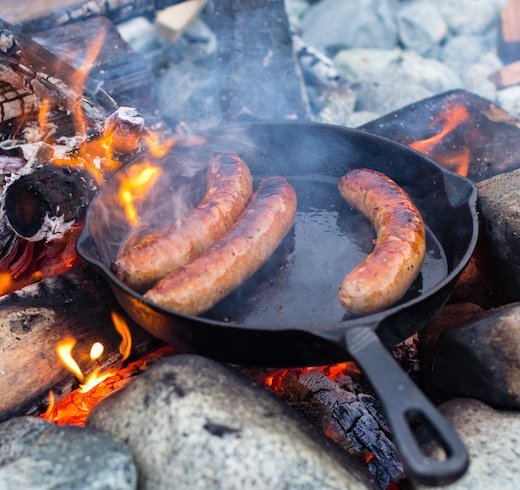 For your safety
Using too much oil can cause your griddle to smoke excessively. Drain the extra oil off before you start cooking.
STAFF
BestReviews

How to season a cast iron griddle

There are several ways to season cast iron, but one of the most common methods starts with pouring a small amount of vegetable oil onto the griddle.

Next, use a clean cloth or paper towel to spread the oil all over the griddle, front and back.

Place the griddle in the oven upside down and bake it on medium heat (about 350°F) for around an hour. You might want to put a piece of aluminum foil on a rack under the griddle to catch any excess oil that drips off.

When the hour is up, turn off the oven, but leave the griddle in there to cool down slowly. 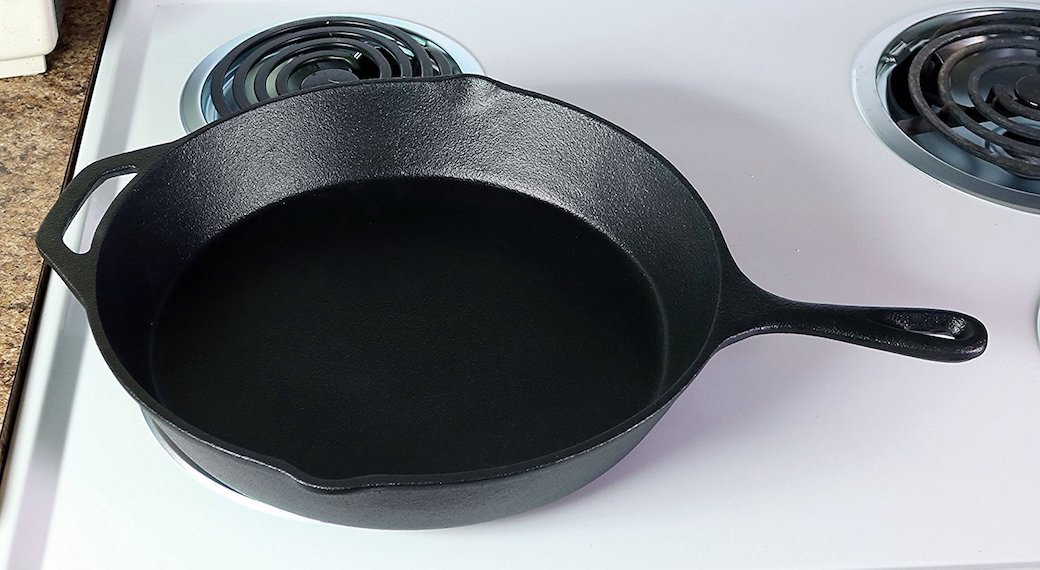 Even if your iron griddle is bought pre-seasoned, you should take the time to season it yourself before use.

Q. Are there any foods that I shouldn’t cook on a cast iron griddle?

A. Like a cast iron skillet, you can cook anything on a cast iron griddle as long as it’s properly seasoned. A cast iron griddle that lacks seasoning should not be used to cook highly acidic foods (tomatoes, for example). The acid can strip the oils from the cast iron and change the color of the griddle and the taste of the food being cooked.

Expert tip
Cast iron can leave a black mark on porcelain. If you have a white porcelain sink, wash your griddle carefully and consider setting it on a dish towel while it’s in the sink.
Andrea Boudewijn
BestReviews Cooking and Baking Expert

A. The more you use and season your cast iron, the less food will stick to it. Having said that, a cast iron griddle will never be as nonstick as a pan made from something like Teflon. A well-used cast iron griddle should have little trouble letting go of whatever you are cooking.

Q. How do I prevent hot spots, which lead to uneven cooking, from developing on my griddle?

A. The answer lies in preheating. When you preheat your griddle, you allow the heat to spread throughout the material and “even out” across the surface. Making sure that your griddle is well-seasoned helps, too. 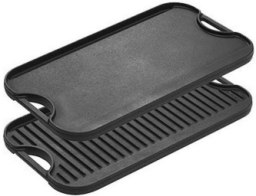 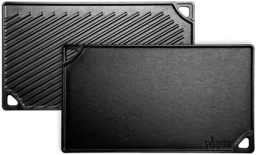 Best Bang for the Buck
Lodge
LDP3 Reversible Grill/Griddle
Bottom Line
Despite a smaller size, it's well made and comes in a practical style with a value price.
Shop Now 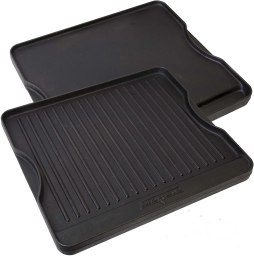 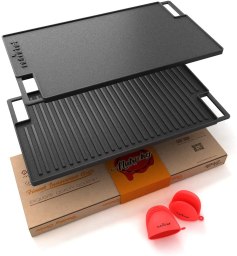 Top Pick
Lodge
Pre-Seasoned Cast-Iron, Round
Bottom Line
Acceptable for anyone whose top concern is their bottom line.
Shop Now 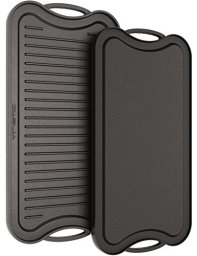 Top Pick
Vremi
Cast Iron Griddle
Bottom Line
Choose this one if saving a bit of money on a spacious griddle is important to you; but the results you get may not be worth the savings.
Shop Now