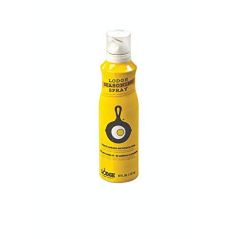 Made by Lodge, a trusted manufacturer of cast iron products. Easy to use, as it comes in a convenient spray bottle with adjustable settings. Natural canola oil with no additives. Has a decent smoke point.

Some consumers gripe that it's pricey, considering it's canola oil; but many more customers are pleased with the applicator and results. 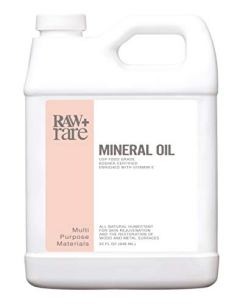 Must be stored in a darkened area away from direct light. 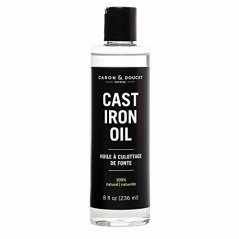 Made of refined coconut oil, which doesn't tend to get sticky and has a light, pleasant scent. Doesn't transfer flavor to foods. Stays fresh with no refrigeration required.

Has a low smoke point, which will result in a smoked-filled kitchen if you aren't careful. 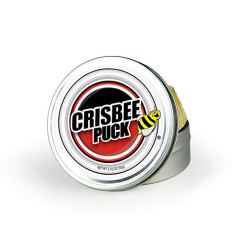 Puck-shaped and easy to use, this product stands out for its unique, solid consistency. Affordable – 2 pucks per tin will last for up to 150 applications. Formulated with beeswax as well as palm and soybean oils. Reasonable smoke point.

A bit messy to apply. Tends to leave behind a slight odor that some users may not like. 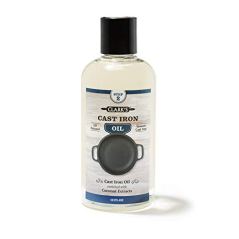 Made from food-grade coconut oil that will not go rancid. Quantity provides multiple applications. Easy to use. Effective at repelling moisture to guard against rust.

There is much to love about cast iron cookware. It is durable and long-lasting, often to the point where beloved pieces get passed down from generation to generation. It is a versatile cooking material, capable of handling everything from fried chicken to eggs to pizza. It is also easy to clean. Maintaining cast iron cookware can take a bit of work, but with the right seasoning oil in your arsenal, you can accomplish this task with ease.

A variety of oils can be used to successfully season a cast iron pan, but cast iron oil is specifically designed to keep your cast iron protected and ready to handle a wide range of foods. In this guide, we examine the information you need to consider before purchasing cast iron oil. We touch on specific smoke points (and why this is important), types of oil, kosher and non-GMO certifications, price, and more. 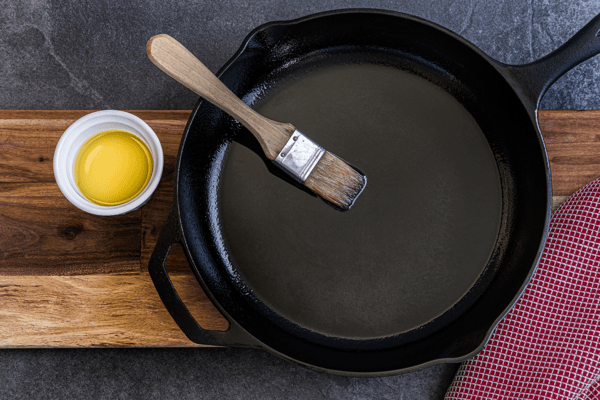 The best way to keep a cast iron pan well-seasoned is to cook in it regularly. Every time you use your cast iron pan to cook, you are re-seasoning it.

Unlike traditional oil, cast iron oil ships in a few different forms. Some are liquids which you can pour directly onto a pan before working it into the surface. Some come in a tube: you squeeze them out like toothpaste. Still others sell in a tin, comparable in looks to a container of shoe polish or car polish. Personal preference can play a role in which you select. Notably, some people find that solid oil is more difficult and time-consuming to use than liquid and spray oil.

Cast iron oils are often categorized by their smoke point. This is the point at which an oil becomes so hot that it starts to smoke and break down. Once an oil reaches its smoke point, it quickly loses its health benefits and can actually create harmful free radicals.

The smoke point is also the point at which an oil will polymerize and bond with cast iron (i.e., season it). Oils with low smoke points polymerize more quickly. Those with high smoke points are best for seasoning pans that will be used to cook foods at higher temperatures.

Cast iron oils ship in a variety of quantities, usually ranging from 6 to 32 ounces. The majority of containers are in the 6-ounce to 12-ounce range. If you are in search of the best bargain, note the price per ounce when comparison shopping.

Some cast iron oils are kosher-certified. Others are made from plant materials that are grown organically or are certified non-GMO. If any of these factors are important to you, pay particular attention to product labels for information.

Never allow a seasoned cast iron pan to soak in water for an extended period of time, as this can quickly lead to rust and will strip away the seasoning. While you can remove rust, preventing it from forming is much easier.

While cast iron oils can include a variety of ingredients, all are based largely on a specific type of oil. Three common oils include coconut oil, palm oil, and flaxseed oil.

Coconut oil: Coconut oil has a smoke point of 350°F. While it has a medium smoke point, coconut oil is a healthy option and one of the more popular (and common) oils for cast iron seasoning. It also features a nice coconut scent.

Palm oil: Palm oil has a smoke point 450°F. While not as popular as coconut-based cast iron oil, palm oil stands out for its high smoke point.

Flaxseed oil: Flaxseed oil has a smoke point of 225°F. For all its negatives — low smoke point, high cost, limited availability — some cooks swear by flaxseed-based cast iron oil. It polymerizes quickly, and unlike other food-safe oils, it also dries quickly. Since cast iron can rust, this is a plus.

Some cast iron oils include additives that attempt to improve the way the oil works. Common additives include other oils such as soybean oil, vitamin E, essential oils, beeswax, and citric acid.

The top of a bottle of cast iron oil can affect the ease with which it dispenses. For liquid oils, some are simple pour tops. Others are narrow squirt tops or even spray tops, which many people find convenient. Solid oil may have a traditional tube dispenser or ship as a tin full of solid oil which you must then remove manually and dispense with a cloth or paper towel. 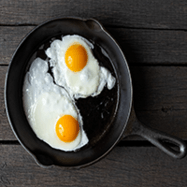 DID YOU KNOW?
When you first buy your cast iron pan, resist cooking delicate foods such as fish and eggs until you have used the pan several times and built up a strong seasoning layer.
STAFF
BestReviews

Cast iron oils under $12 are often in liquid form and usually contain a minimal amount of oil. The top limit is 8 ounces, although the majority of products at this price point contain 6 ounces or less.

You can expect to find the largest container sizes as well as more expensive oils, such as flaxseed oil, in the highest price bracket of $20 or more. Common here are oil/soap sets that contain everything you need to maintain and clean your cast iron cookware.

While olive oil is popular for cooking, it is not recommended as a seasoning oil due to its low smoke point. 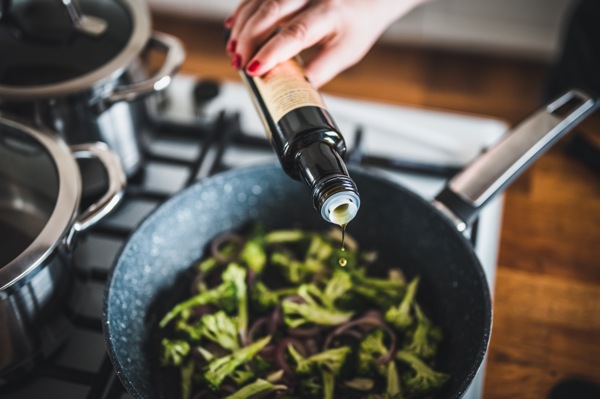 While you can cook highly acidic foods like tomatoes in a cast iron pan, be sure the pan is well-seasoned first to avoid a metallic taste and discolored food.

Q. What is the best way to season my cast iron pans?

A. While some manufacturers season their cast iron cookware as part of the manufacturing process, others do not complete this step. If you are unsure whether your cast iron pans have been properly seasoned, you will want to season them before using them.

While you can season a cast iron pan on a stovetop, the easiest way to do it is in your oven. Follow the steps provided by the manufacturer. Generally speaking, the process goes like this:

When the temperature of the oil hits its smoke point, polymerization will occur, bonding a layer of the oil to the cast iron. To develop a solid seasoning layer, repeat these steps at least three times before using your cast iron cookware.

Q. How should I store my cast iron oil?

A. Cooking oils in general are shelf-stable and should be fine as long as you store them in a cool area out of direct sunlight. Although we’d expect most cast iron oils to be similar, check with the manufacturer’s storage recommendations to be certain. Also note the oil’s “best by” date, and give it a sniff test before every use. If it smells off or rancid, it is probably best not to use it on your cast iron pan.

Q. Can I use butter to season my cast iron pan?

A. Animal fats such as lard or butter were the traditional materials used to season cast iron and keep it from rusting. While you can still use these to season your cast iron cookware, there are a couple of reasons why an oil-based solution might be better.

Butter can leave streaks or dark spots on cast iron pans. Butter and lard can also go rancid if kept on cast iron cookware that is not regularly used. This can lead to food that tastes or smells bad.

Q. Is it true that I should not use soap to clean my cast iron pan?

A. A popular myth holds that you should never use soap on a cast iron pan, but this is just not true. While you can use soap and water to wash a seasoned pan, a better cleaning option is to add a bit of oil and kosher salt to the pan and scrub it with paper towels. Rinse and dry the pan thoroughly. At this point, you can rub a couple of drops into the pan to protect it. 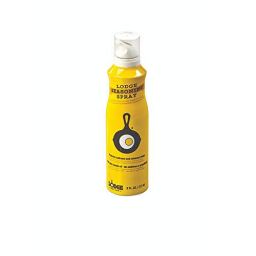 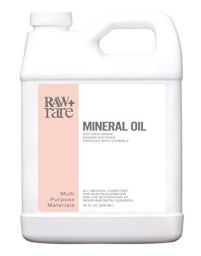 Best Bang for the Buck
Raw + Rare
All Natural Mineral Oil, 32 oz.
Bottom Line
Although it isn't made of any special oils, many consumers who love to cook on cast iron surfaces swear by mineral oil to season them, and it would be hard to find a better deal than this generous portion and multi-purpose product.
Shop Now 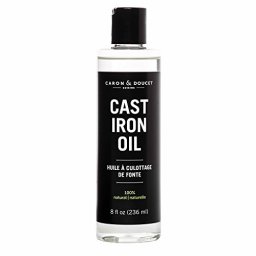 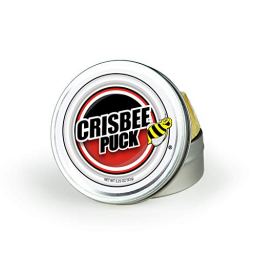 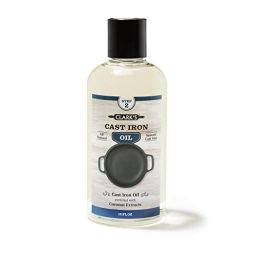