This large wok is the perfect size for cooking generous amounts of your favorite stir-fry recipes.

Has two assist loop handles, which offer a safe, secure grip. Flat bottom allows you to use an electric or gas range without a ring to hold the wok steady as it transfers the heat rapidly from the burner to the wok. Pre-seasoned. Heavy and flat on the bottom, so it won't move around on the stove when cooking. Stays hot for a long time.

It's heavy, so be mindful when hand washing in metal sinks or handling on any surface that might dent or crack. Interior is rough and pitted. 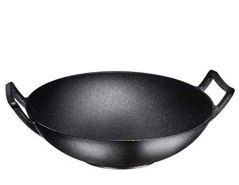 This wok makes everything without the mess and spillover as compared to cooking in regular shaped pans.

Cleanup is much easier than expected, thanks to the height and width of the wok. You will like the wide handles, as well as the safe and secure grip. Wide curved base offers stability while stir-frying. Has modern rustic design that goes from stove or oven to table. Comes pre-seasoned.

Some woks may arrive with cracks (a manufacturing defect), so inspect when you receive it. May leave a funky metallic odor in the food if not properly washed. 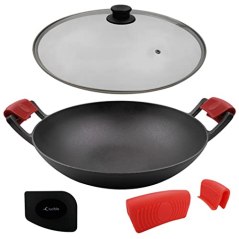 An all-in-one set that includes a wok, lid, and silicone handles for easier, safer, more convenient cooking and food storage.

Already seasoned, so ready to use after a quick hand washing. Versatile – can be used on just about any cooking surface, including a grill or in an oven. Two side handles and silicone grips make it easy to safety remove from the heat or transfer food. Lid keeps food warm longer after cooking is complete, and contains splatter. Comes with gift box and recipes.

Some reported it arrived with items missing or that the lid did not fit properly, and customer care is questionable.

The right tool to sear, saute, bake, broil, braise, fry or grill, this wok is at home in the oven, on the stove, on the grill, or even over a campfire.

Retains heat well Seasoned with oil for a natural, easy-release finish that gets better each time. Great for induction cooktops. Easy care: hand wash, dry, and rub with cooking oil. Base is flat and sits on stove without rocking. The base is heavy and thicker than the sides. Meats cook quickly. Use it for everything from a few servings of soup to stir-fried chicken breasts or tofu.

Some woks may have large bump sticking out inside. Could be smoother inside.

Comes with a wooden lid made of cedar and extra large handles. Adds to the aesthetics of the cookware, but it's also practical and functional.

The lid helps keep finished dishes warm and can protect from food splatters. The handles are extra large for easy grip while cooking and transferring dishes. Nice and heavy so you can stir food without holding the handles. Not sticky at all and the wood lid fits very well. Perfect heat conduction. Nice wok to prep vegetables and meats for two.

The pot may not be even. Difficult to clean. Expensive. The lid also has natural accruing cracks.

If you want to make traditional Chinese food, a quality wok is a kitchen must-have. And although cast iron is not the most traditional wok material, it’s a material that tends to give excellent results. As such, we highly recommend adding a cast iron wok to your cooking arsenal.

Cast iron is rugged and durable, and a wok made of cast iron can last a lifetime if you look after it properly. With seasoning, cast iron forms a nonstick coating that allows you to dodge controversial chemicals that can scratch or peel. What’s more, the iron from the wok leaches iron into your food, so it’s a great way of boosting your iron levels.

Should you buy a seasoned or unseasoned cast iron wok? What size do you require? And what about a lid; do you need one? This shopping guide will address your questions and lead you to the best cast iron wok for your kitchen. 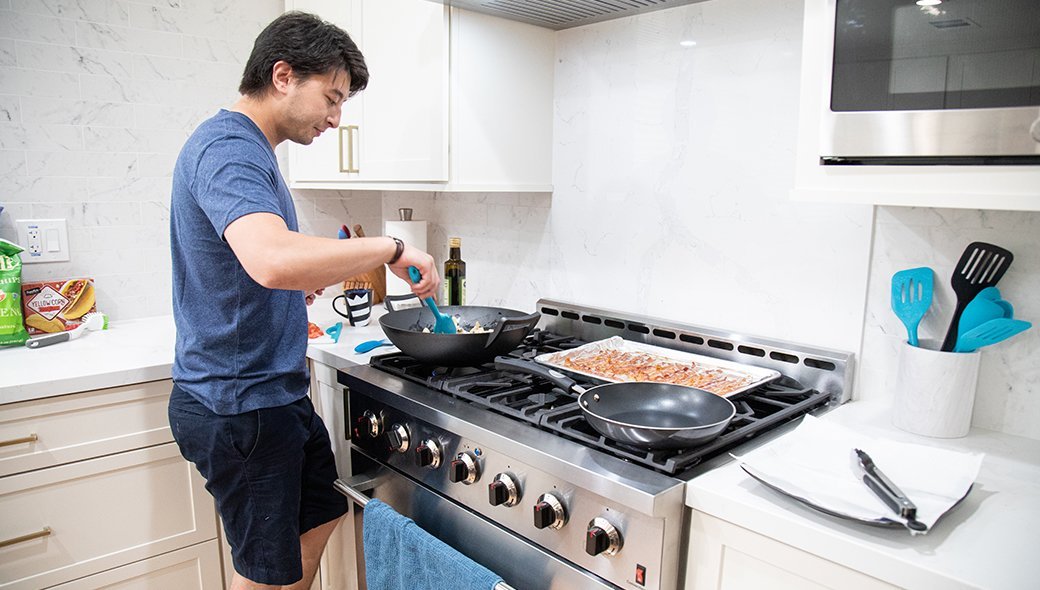 Although round-bottom woks are traditional, the majority of cast iron models have flat bottoms, which sit nicely on all kinds of stoves and produce excellent results.

Seasoning a cast iron pan doesn't mean liberally sprinkling it with salt and pepper. Seasoning involves building a layer of oil that binds with the iron to form a nonstick coating. Many cast iron woks come pre-seasoned, but you can season your cast iron wok yourself, either in the oven or on the stovetop. Some people prefer to buy an unseasoned wok, as factory seasoning can be unreliable.

Consider what size of cast iron wok you require. The majority of woks are 12, 14, or 16 inches in diameter, though you can find some larger and smaller options. Remember that the listed diameter is the largest part of the wok, so the capacity might be less than you'd expect. In general, 12-inch woks are the right size to cook meals for one to two people, or perhaps two adults and a child. Bigger households of three to five would need a 14-inch wok to make enough food to go around. If you regularly cook for groups of six or more, or if you like to have plenty of leftovers, opt for a 16-inch cast iron wok.

Of course, all cast iron woks are circular, but some are more flared than others. It's also worth considering the depth of the wok. Cast iron woks that are too deep won't have great heat transfer up the sides, but those that are shallow don't allow for adequate tossing, which is an important part of stir frying.

The majority of cast iron woks have two short handles, one on each side. While you might be used to seeing long-handled woks, it's traditional for Cantonese woks to feature two short loop handles. This handle type is best for cast iron woks, as they're very heavy, and you couldn't hold them in a stable manner using a long handle. The downside is that you may need to use oven mitts to move your cast iron wok, although that doesn't require much extra effort.

Some cast iron woks come with lids. You may or may not find it a useful addition, depending on what you intend to cook. For instance, you'd need a lid for steaming and braising, but if you only intend to stir fry or deep fry in your wok, a lid is unnecessary.

Basic cast iron woks generally cost between $25 to $45. Although you can find a few decent models in this price range, they're few and far between.

High-end cast iron woks cost in the vicinity of $100 to $200. These are high-quality models, usually favored by professional chefs and keen amateurs.

Cast iron retains heat exceptionally well and lets you achieve a pleasing charr on your food.

Q. How do I clean my cast iron wok?
A.
You must take care when cleaning your cast iron wok. You can't use a heavy scourer lest it take off layers of hard-won seasoning, and you certainly can't stick it in the dishwasher. If it doesn't have any foodstuff stuck to it, simply wipe it with a clean cloth and store it. Otherwise, wash it by hand with a soft sponge or dishcloth, and dry it carefully.

Some people advise never to use dish soap on a cast iron wok, but we haven't found this to be problematic.

Q. I want to learn about wok cooking. How can I find out more?
A.
You'll find a wide range of cookbooks dedicated to wok cooking, as well as plenty of free resources online. 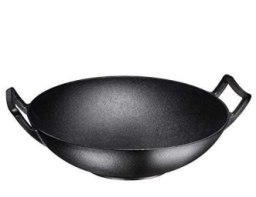 Best Bang for the Buck
Bruntmor
Black Pre-Seasoned 14" Cast Iron Wok
Bottom Line
This wok makes everything without the mess and spillover as compared to cooking in regular shaped pans.
Shop Now 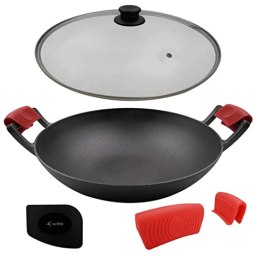 Top Pick
Lodge
Black 9" Cast Iron Mini Wok
Bottom Line
The right tool to sear, saute, bake, broil, braise, fry or grill, this wok is at home in the oven, on the stove, on the grill, or even over a campfire.
Shop Now

Top Pick
Kasian House
Cast Iron 12" Stir-Fry Wok
Bottom Line
Comes with a wooden lid made of cedar and extra large handles. Adds to the aesthetics of the cookware, but it's also practical and functional.
Shop Now