A must-have for anyone who enjoys sampling a variety of craft beers, as the styles are made to match brew aromas, flavors, and frothy tops.

An assortment of glasses designed for different types of beers from ales to stouts. Shapes are made to bring out specific qualities of craft beers. Casual beer drinkers can learn about different mug-shape functionality. Beer-lovers like the sense of variety that's not always available in quality sets like this.

Though they have a sturdy feel, the glass could be a bit thicker. 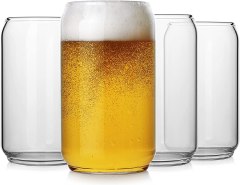 Get the convenient shape of a beer can in the form of a glass that looks fantastic when filled with a delicious, golden-red lager.

These are 20-ounce glasses for a bargain price. High-quality borosilicate glass should withstand harsh temperature changes without cracking or warping. The can-like shape helps carbonation stay alive and form the perfect foam heads that so many beer fans value. Great for lagers, especially. 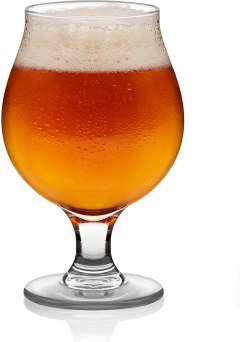 The rounded bowl is specifically designed to improve aroma and flavor while. The tapered top accommodates generous, frothy heads. Weighty and solid construction is durable and adds to the uniquely sophisticated yet comfortable feel of these glasses.

Some who prefer dainty glasses may feel these are too rugged. A few owners gripe about size discrepancies. 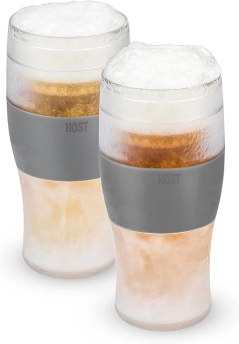 These beer glasses come in several different shapes and sizes to fit your preferences.

Great for your favorite beers, regardless of type. Plastic walls are filled with cooling gel that keeps them cool for as long as 2 hours. Comfort grip keeps your hands warm and your drink cool. Great for summer beers, shandies, and other cool, refreshing drinks.

Make sure that you store them upside down, as many reviews reflect what happens when you don't. 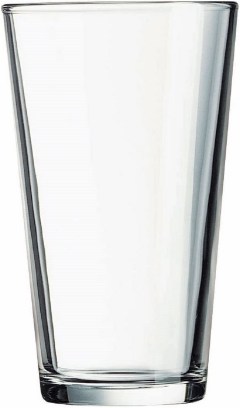 This set offers reasonable quality and enough glasses for large groups at a price point that won't break your beer budget.

This large set offers attractive glasses with simplistic, fuss-free design and sturdy construction. It's also an excellent value for your money, as you get 9 glasses for a surprisingly affordable price.

Some glasses have irregularities, such as uneven lips. A few consumers received the wrong size.

There’s nothing like enjoying a cold one on a hot summer day, but what if you could make that beer taste even better without actually doing anything to alter the beer? Happily, you can. The secret is pouring that cold one into the appropriate beer glass before savoring it.

If you’ve never bothered to pour beer into a glass – after all, it comes in a perfectly good bottle or can, right? – you might think all the hype over various types of glasses for beer is nothing more than marketing puff or the rarified ramblings of the connoisseur. But the right glassware for the right beer actually does improve the aroma, taste, and appearance of the beverage.

There are lots of types of beer glasses available, so how do you know which is the right type? And does it really matter which shape of glass you pour that IPA or stout into? We’re here to answer those questions. 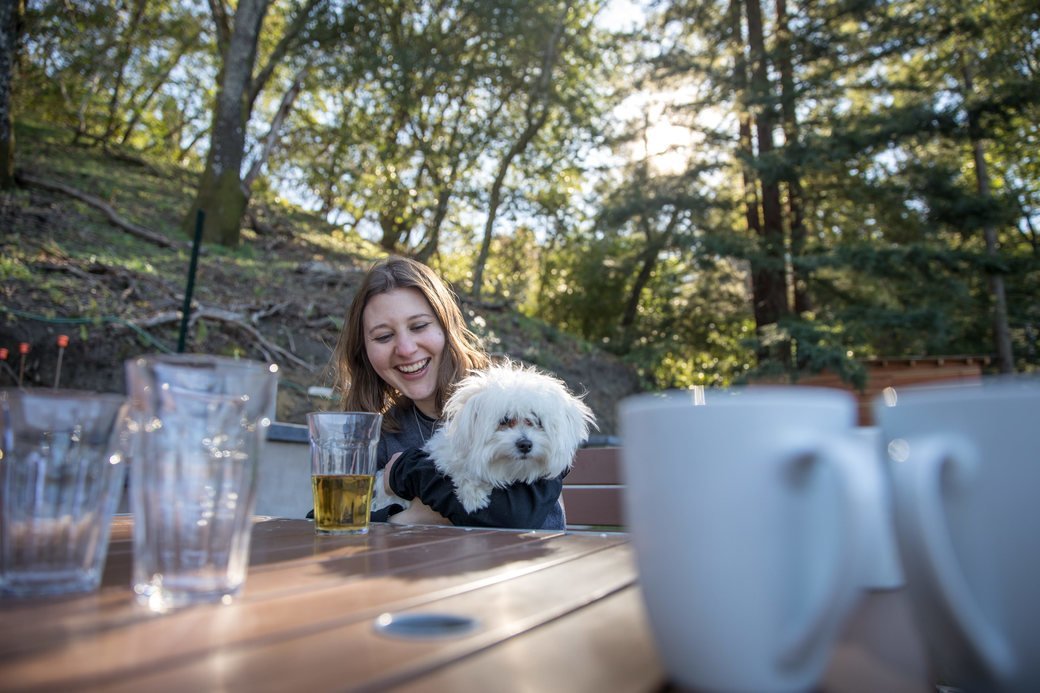 Whatever your favorite beer is, be it IPA, lager, ale, stout, or bock, there’s a beer glass shape to match.

Why drink beer from a glass?

While there are certainly times you won’t want to bother with a glass – at a picnic, for example, or right after you’ve finished a grueling afternoon of yard work – the right beer glass can make a difference if you’re enjoying a beer with friends or coworkers, having guests over, or simply spending some time savoring a good beer on your own. There are two main reasons for this: aroma and head.

Unlike other alcohols, most beers – when poured correctly – develop a head of foam. The chemistry behind why beer develops a head is rather complex, but it mostly comes down to yeast, hops residue, and barley proteins fermenting to create carbon dioxide, which rises to the surface of the drink as it’s poured.

This is important because the head “holds on” to the volatile components of the beer, gently releasing them, along with their aromas, as the bubbles pop. This is all a fancy way to say that the head on the beer increases your experience of its aroma and flavor.

Like all alcohols, beer is volatile, meaning that it has components that evaporate easily and release aroma.

That aroma – a combination of hops oils, fermentation byproducts, flavorings, esters, and yeast – is a crucial part of your enjoyment, as your sense of smell is intricately entwined with your sense of taste.

In fact, some researchers say as much as 80% of the flavors we taste actually come from our sense of smell. Because a beer glass has a much larger surface area than a bottle or can, far more of the beer aroma hits your nose, giving you a fuller taste experience.

You’ll find a wide range of beer glasses on the shelves of your favorite virtual or local housewares shop. Choosing a beer glass depends partly on aesthetic preference, though if you're a craft beer fan, you may choose the shape best suited to your favorite beer variety. Here are some of the most common types.

These heavy glass mugs have a handle, sides that are straight or very slightly curved, and sometimes “dimples” in the glass.

Beer mugs are fun to hold and sturdy enough to clink together in as many toasts as you and your drinking buddies care to give. The thick walls help keep beer cool.

This is the beer glass common to English pubs, and it’s sometimes referred to as an English pint glass.

It’s similar to a shaker pint, but a slight bulge around a quarter of the way down from the top helps aerate the beer as you drink, releasing more aroma and flavor.

Walk into an American bar and order a beer, and this is the glass it will likely be served in. Also called an American pint, this is a tall glass with a slight taper from bottom to top and straight sides without a lip or bulge.

While easy to clean and stack, sturdy in construction, and inexpensive to buy, the shaker pint actually does little to improve the flavor of beer. In fact, it was originally designed for mixing cocktails.

You’ll find a few variations, but all pilsner glasses are tall and thin. Some have a bit of a “waist” near the bottom, while others have a very gentle flare from bottom to top.

Pilsner glasses are great for showing off the color and carbonation of beer, and they work well to retain the foamy head that increases aroma.

Resembling wine glasses, goblets have a longer stem and delicate sides, while chalices have a short stem and sturdier sides. Most curve slightly inward at the lip, focusing the aroma as you drink and maintaining the beer’s head.

These glasses have long stems and tulip-shaped bowls that narrow in the middle with a slight flare at the top.

The shape is perfect for beers with a lot of head, and the lower bowl enhances the volatile elements of the beer.

While usually associated with cognac or brandy, snifters are also excellent beer glasses, as they capture the aroma and focus it toward your nose. Swirl the beer before drinking to heighten the effect.

This tall, slender glass concentrates the beer aroma and is typically paired with delicate beers to intensify their flavor.

This is the classic “Oktoberfest” beer mug. Most are made of ceramic, pewter, stoneware, or even wood, but not glass.

A stein has a hinged lid with a lever for your thumb. Beer steins are more often used as souvenirs or bar décor than for drinking these days, and some are very beautifully decorated.

Did you know?
Looking for a fun gift? There are many gimmick or gag types of beer glasses available, such as glasses in the shape of a boot, glasses inscribed with funny sayings, and even glasses shaped like footballs.
STAFF
BestReviews

Whatever the type of glass, pouring the beer correctly will lead to the best taste.

A lot of factors impact the cost of beer glasses, including quality, type, and the size of the set.

In general, however, you should expect to pay between $10 and $25 for a set of four good-quality beer glasses.

Specialty shapes, larger sets, and sets of superior quality might cost more than $30. 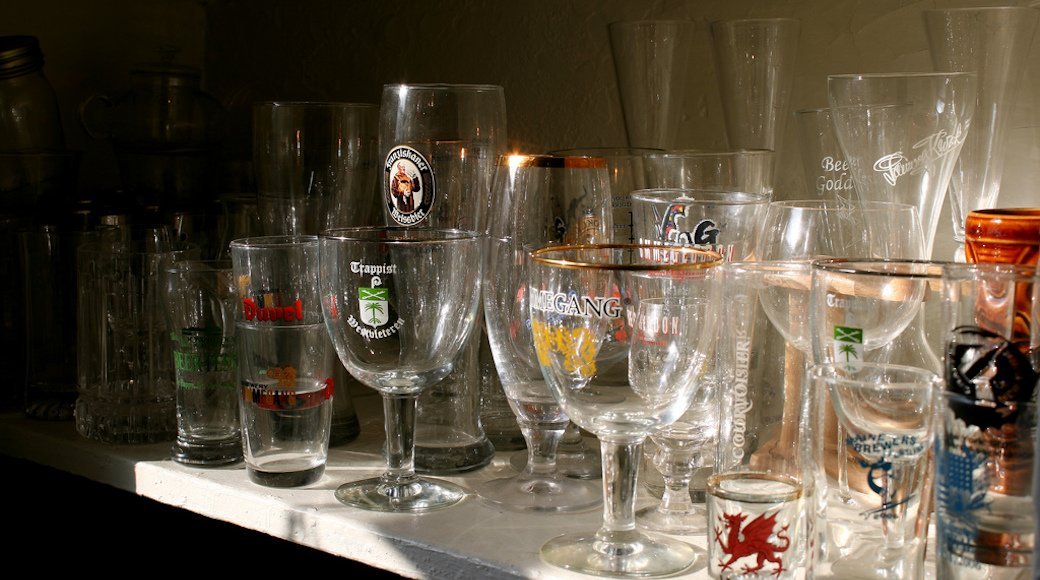 A collection of souvenir beer glasses is a great way to commemorate your travels.

Q. Is it better to buy a set that includes one type of beer glass or assorted styles?

A. Both are fine. If you generally stick with just one type of beer, you’ll probably find that a set that matches your favorite brew is best. If you like to sample a variety of beers, however, go for the mixed set.

Q. How should I care for my beer glasses?

A. If you really want the best beer taste, wash your glasses by hand with mild dishwashing soap and let them air dry. Washing beer glasses in the dishwasher can leave a slight soap residue that affects taste. Store your glasses upright, not on their rims.

Best of the Best
Libbey
Assorted Craft Brews Beer Drinkware Set; Various Sizes, Set of 6
Bottom Line
A must-have for anyone who enjoys sampling a variety of craft beers, as the styles are made to match brew aromas, flavors, and frothy tops.
Shop Now 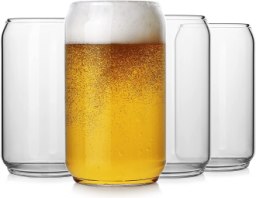 Best Bang for the Buck
BaveL
20 oz Can-Shaped beer Glasses, Set of 4
Bottom Line
Get the convenient shape of a beer can in the form of a glass that looks fantastic when filled with a delicious, golden-red lager.
Shop Now 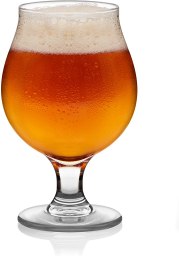 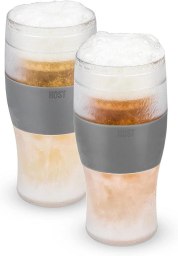 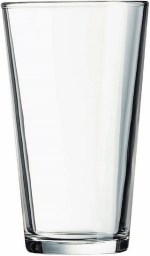 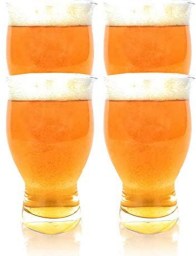 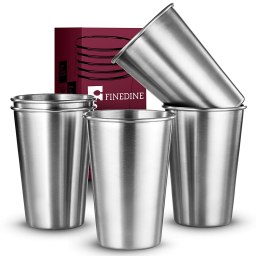 Top Pick
FineDine (NOT A BEER GLASS)
Premium Grade Stainless Steel Pint Tumblers; 16 Oz., Set of 5
Bottom Line
Not for traditionalists but adventurous beer aficionados who want pints that are made to chill and last until the final sip.
Shop Now 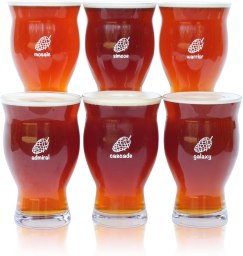 Top Pick
Circleware
Tasteful Beer Glasses; 19.25 Oz., Set of 4
Bottom Line
If you are looking for traditional beer glasses that are functional, reasonably sturdy, and attractive, this set of 4 is a great choice for enjoying all of your favorite brews.
Shop Now