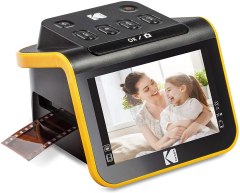 A beautiful display and editing options make this a great pick.

Has resizing, enhancing, and converting options that are easy to use. Continuous slide loading allows for conversions in half the time of other scanners. Includes multiple slide adapters.

You may have to clean the scanning lens fairly often. 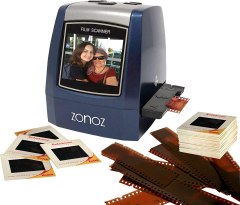 Beautiful images and solid settings for a reasonable price.

Scans a wide variety of different-sized film slides. Does not need a computer for uploading for a first-time setup. The built-in screen displays the image well. Can adjust the image's resolution.

Only supports up to 32GB of storage. 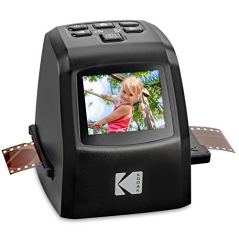 A great scanner that is easy to take with you on the go.

Compatible with a wide range of film strip sizes and types. Comes with a built-in USB cable for easy connection. The compact size allows you to take it with you instead of risking damage to film slides.

It doesn't have a lot of editing options on the device itself. 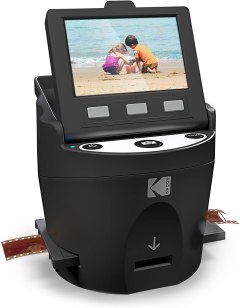 A larger option that scans images quickly and easily.

The included screen can be tilted to your liking. Comes with multiple adapters to accommodate different sizes. The buttons are easy to understand and use. Supports up to 128GB SD card.

Can only create digital images up to 14 megapixels in resolution. 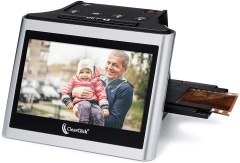 An option that can operate independently of a computer.

Doesn't need to be plugged directly into a computer for transfer. Can be linked up to a TV to show off images directly from the device. Has some color and brightness options on the device.

Some photos with extreme light or too dark may not show up well.

These days, most people take digital photos to capture their favorite memories, but if you grew up before the internet – or if you have loved ones who did – chances are you’ve got a bunch of photos and slides that were taken with analog cameras. Most families have dozens of boxes of photos or slides collecting dust somewhere in an attic or turning yellow in an ancient photo album. Thankfully, there’s a way to get your favorite photographs and slides onto your computer so you can restore, share, and archive them: by using a film and slide scanner.

Film and slide scanners are small devices that produce digital images from photos, slides, and film formats of all different kinds. In most cases, they include a small LCD screen for basic operation, and they scan slides or pictures to common formats like JPG or PNG. Some film and slide scanners operate as standalone units that save images to a memory card, while others are designed to be connected to a computer when in use.

If you’re looking to preserve your family’s most precious photographic mementos from before the digital era, you need a film and slide scanner. Here’s everything you need to know to pick out the best one for your needs. When you’re ready to buy, we’ve highlighted some of our favorite models, too. 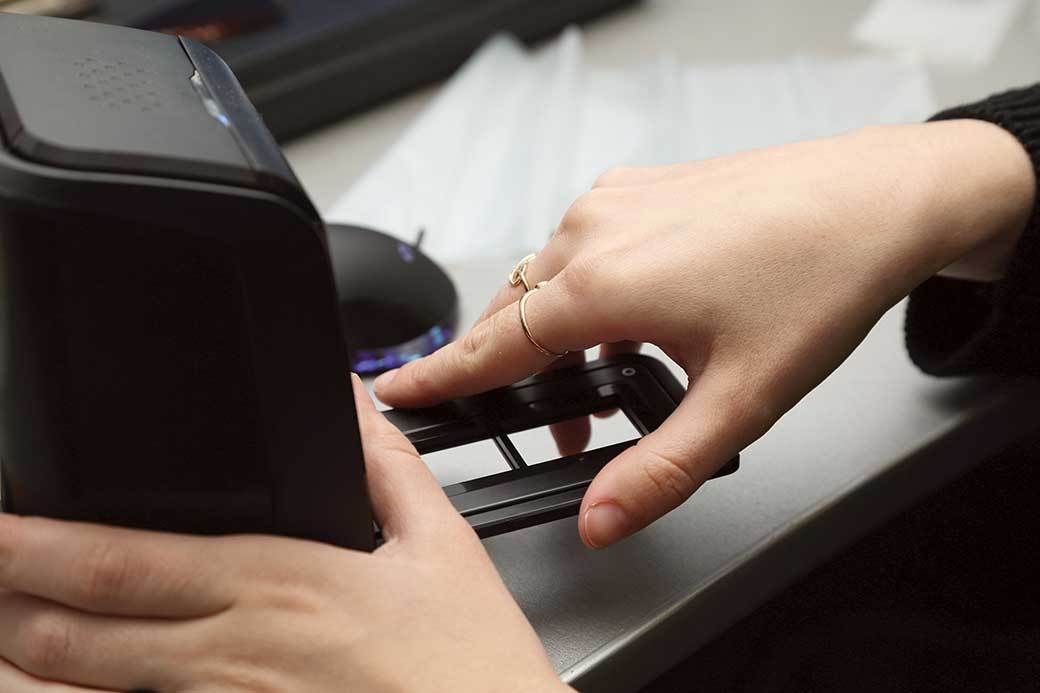 Consider where you’ll store your scanned photos. Many users store scanned images on an external hard drive or NAS device. Others use a cloud backup service to keep their scanned photos with their other digital photos.

Before you start shopping for a film and slide scanner, collect some basic information to help clarify what you’re looking for. Start by answering these questions:

What film types do you need to scan?

Old-school cameras used different types of film: most worked with 35 mm, but other formats like 110 and 126 were popular during the 1970s and 1980s as well. Start with your source material and make sure the film and slide scanner you buy will work with what you have.

Do you want to scan images to a computer or memory card?

If you prefer to work with a laptop or desktop computer while you’re scanning your photos and slides (which can be great if you want to edit your photos as you go), get a model with a USB connection. If you’ll be scanning in multiple locations, get a standalone model that scans directly to a memory card. That way, portability is never an issue.

Do you want to play slideshows on your TV?

When it comes to film and slide scanners, there are three key features that matter more than the others: format compatibility, megapixels, and portability.

Image resolution is measured in megapixels (MP), so units with higher megapixels take more detailed scans, while those with lower megapixels create smaller, blurrier images. If you’re just looking for a tool for uploading old images to social media, you can get away with a 2MP film and slide scanner, but if you want images that you can make prints from, you’ll need one with at least a 14MP scanner on board.

For years, film and slide scanners required a computer with software to enable the scanning, but more recently, all-in-one units have made it much easier to scan images on the go. Some portable film and slide scanners are even made to work with scrapbooks and photo albums, so you can create digital images from any type of photo.

Inexpensive: If you just need a basic film and slide scanner and don’t mind getting one with a smallish screen, you can get a good one for between $50 and $150. Most models in this price range don’t include a memory card, so you’ll need to purchase storage separately. Some scanners on the high end of the range can also scan filmstrips, so you can convert them to digital video.

Mid-range: Film and slide scanners that cost between $150 and $200 up the ante in all ways: they’ve got bigger screens, they work with more formats, and they’ve often got connectivity options like HDMI and USB-C. If you’re scanning film or slides for archival purposes, or you just want an above-average scanner, plan on spending this much.

Expensive: If you need a professional-quality scanner, a proper flatbed scanner is your best bet, and good ones start at about $200. Prices increase from there.

Caution
Before you start scanning, decide on a file-naming convention for your digital images. When scanning multiple images, it’s easy to lose track of which is which. Try including key identifiers like the month and year the picture was taken or the location.
STAFF
BestReviews 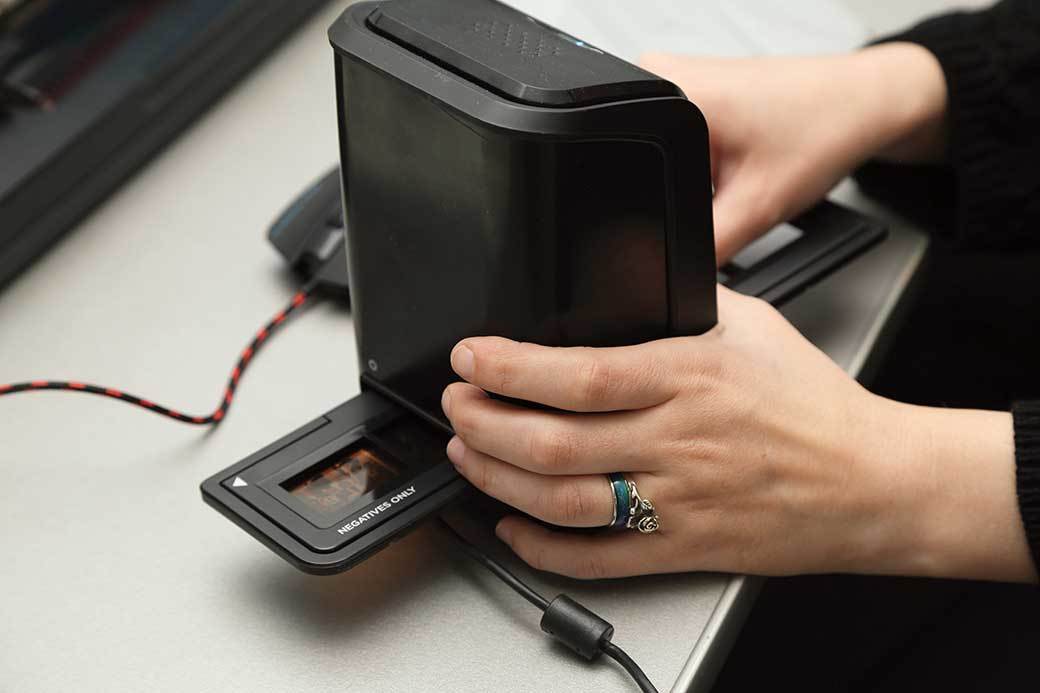 The desktop software included with most scanners can be clunky and hard to use. If manufacturer software is the only way to transfer images from your scanner, you might need to use it, but if you’re looking for photo-editing tools, there are better tools available for free, and many of them are smartphone apps.

Q. How long does it take to scan a slide?
A.
Usually not more than ten seconds. While some film and slide scanners are advertised as “extra fast,” none are that slow to begin with. When it comes to scanning old photos and slides, it’s important to do it on a one-at-a-time basis because you’ll want to make minor adjustments to make sure each photo comes out looking right. Scanning slides can be a time-consuming process, but the results are always worth it.

Q. Do I need to be a “tech person” to use a film and slide scanner?
A. No. Film and slide scanners are designed for everyone and typically include intuitive controls and easy-to-understand instructions. If you’re intimidated by the thought of setting up your own film and slide scanner, consider getting someone to walk you through it the first time. Once you get the steps down for scanning an image, you’ll find it easy to operate even if you’re not that technically inclined.

Q. Will images I scan look OK if I print them out?
A. It depends on what resolution you’re scanning at, but generally, yes. In order for an image to look good when printed out in a common format like 5 x 7 or 8 x 10, it needs to have a high enough resolution (usually at least 10MP). Film and slide scanners are built to create printable images, and most scan images at resolutions that are more than detailed enough (like 22MP images). 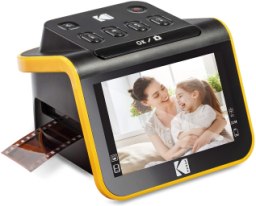 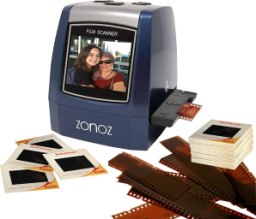 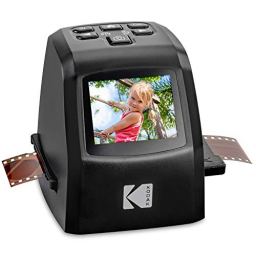 Top Pick
Kodak
Mini Digital Film Scanner
Bottom Line
A great scanner that is easy to take with you on the go.
Shop Now 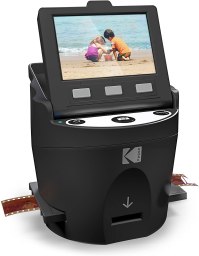 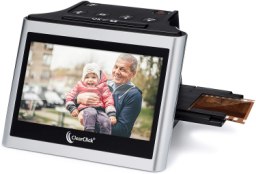 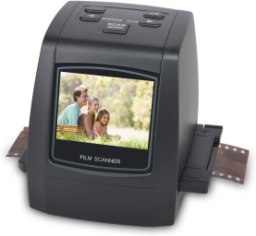 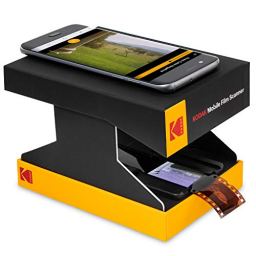 Top Pick
Kodak
Mobile Film Scanner
Bottom Line
If you need an inexpensive way to scan film strips quickly while touching them up as you go, this model is for you.
Shop Now