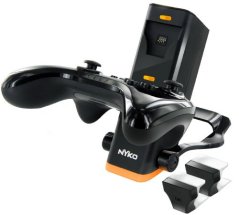 Lightweight yet sturdy charging base that provides rapid charging for 2 Wii U Pro controllers. Bright charging indicator over each charging slot. As a separate charging station, prevents GamePad from discharging power, which occurs when charging Pro via the Wii U console.

Has a manual, not automatic, on-off switch. Must place magnetic dongles (included) onto Pro controllers in order to work. 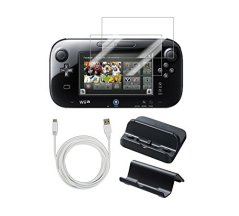 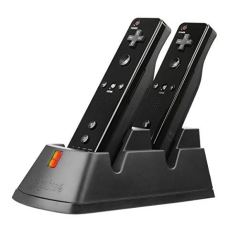 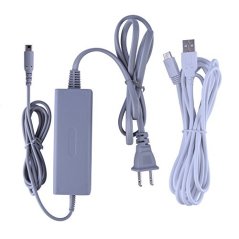 Enables users to charge the Wii U GamePad via a wall outlet, without having to turn on Wii U console. USB cable allows GamePad to be charged with any USB port. Comparable lifespan to the OEM Nintendo charger. 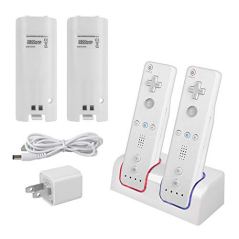 A charger base with a fairly compact design that charges Wii U remote controllers quickly and reliably within 2 hours.

The Wii U comes bundled with a controller charging cradle for the console’s unique GamePad, but it doesn’t cover the multiple Wii remotes that will need replacement batteries between marathon gaming sessions. Even then, no one wants to consider the worst-case scenario of figuring out how to get back in the game if the controller charging cradle stops working some day. Fortunately, there are plenty of third-party Wii U controller chargers available to help make sure you’ll always have a fully charged Wii U GamePad or remote handy for couch-side fun with friends.

If you’re afraid that your Wii U controller may run out of juice as you’re facing down the final boss or as you’re about to KO your biggest online rival, a dedicated controller charger is just what you need. But they’re not all the same, so it’s a good idea to compare a few models to find the one that’s best for your gaming habits. After taking some popular Wii U controller chargers out for a spin, we at BestReviews have learned how to pick the best from the rest. Read on to find out what we learned and to see some of our favorites. 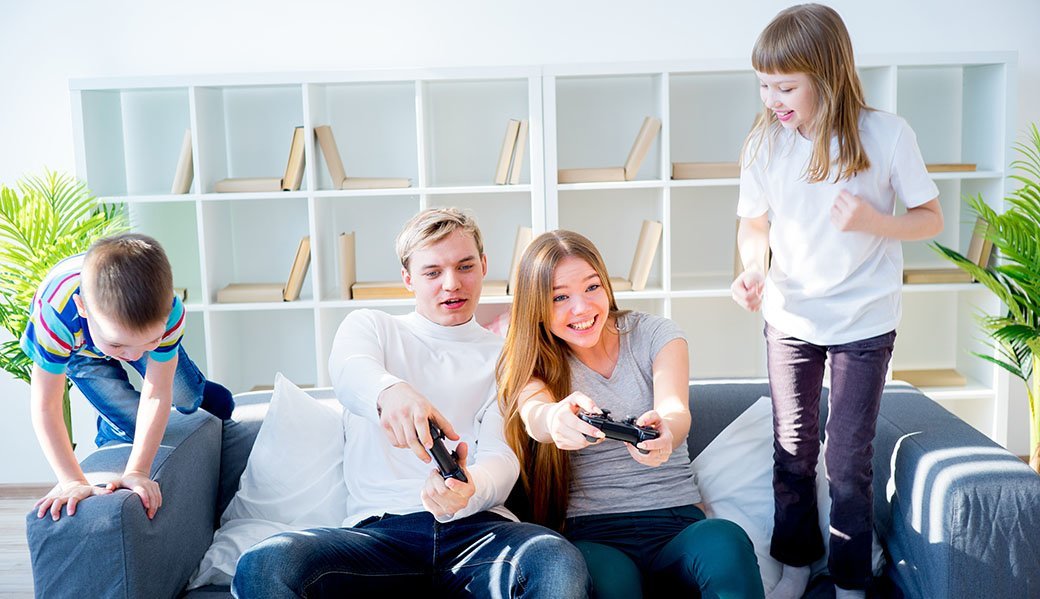 It takes about 2.5 hours to fully charge a Wii U GamePad.

The Wii U GamePad will always deliver three to five hours of uninterrupted gameplay per charge, but the hours of playtime provided by battery packs included with Wii Remote, Wii Remote Plus, and Pro Controller chargers vary by charger. Since you’d rather keep your Wii U controller in your hands and off the charger for as long as possible, look for devices that feature higher-capacity battery packs.

A Wii U GamePad with a dead battery takes 2.5 hours to fully charge, but how quickly a Wii U controller charger takes to completely restore a spent Wii Remote, Wii Remote Plus, or Pro Controller battery will vary by model. As a general rule, you shouldn’t have to wait longer than an hour or two for one of these other controllers to charge fully.

Unfortunately, the official Nintendo GamePad Stand/Cradle Set is difficult to find in the wild, and Nintendo has never released an official method of recharging Wii Remote, Wii Remote Plus, or Pro Controllers, so you’ll be forced to adopt third party devices to charge your Wii U controllers. No matter which charger you select, you should have no difficulty inserting compatible controllers into the connection slots, and it should fully recharge your controller every time you use the device.

The most important aspect of any Wii U controller charger is that your controllers get fully charged within a few hours, but these devices have few defining features that set them apart from each other. Whether you need a Wii U charger for a GamePad, Wii Remotes, or Pro Controllers, here are a few common features that are usually included with a charger:

Expert Tip
No matter which Wii U controller charger you buy, your controllers should snap snugly in place and deliver a full charge after a few hours. If you have trouble connecting your controllers, or if the device doesn’t power your controllers as advertised, return the charger immediately and purchase a different model.
STAFF
BestReviews 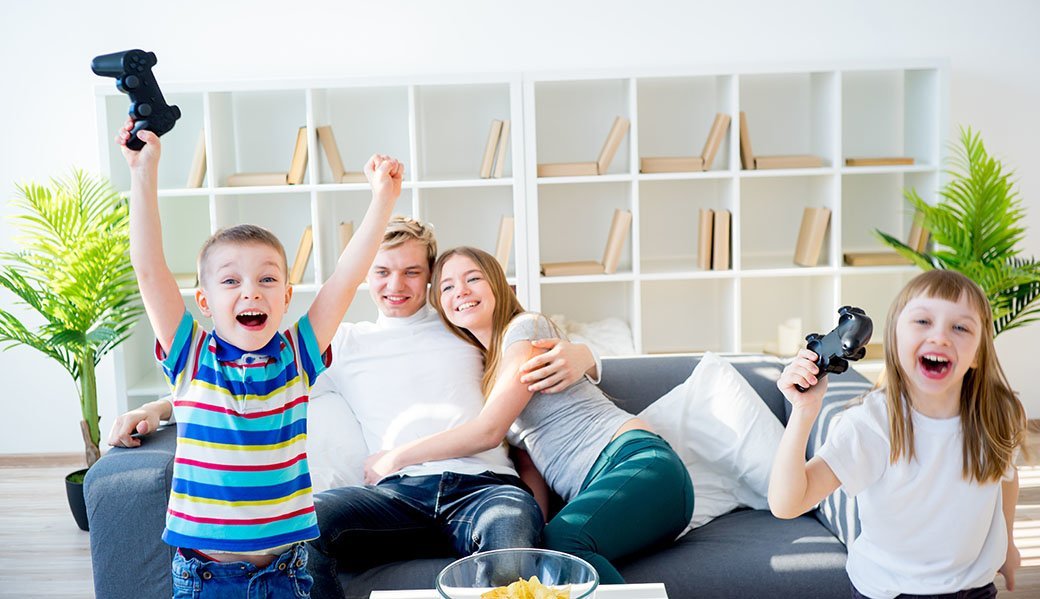 A cradle or base-type Wii U controller charger is a great way to store, display, and charge your controllers at the same time.

Q. Can I recharge my Wii U GamePad and play games at the same time?
A.
Yes! Because most Wii U GamePad chargers are either a simple AC cable or a charging cradle, players still have their choice of continuing their adventures on the TV or via the small screen embedded in the GamePad itself.

Q. Will a Wii U controller charger recharge multiple controllers at once?
A. Most of the time. If you’re in the market for a Wii Remote or Wii U Pro Controller charger, chances are good that the device will have at least two charging ports. Wii U GamePad chargers usually consist of a simple AC adapter cable or charging cradle that is exclusively made to hold and charge the GamePad. The good news is that there aren’t any Wii U games that utilize multiple GamePads, so you’ll never need more than one charger for this kind of controller. 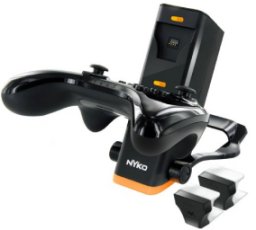 Best of the Best
Nyko
Charge Base Pro
Bottom Line
Superbly designed charger base for the often unwieldy Wii U Pro controllers. You’ll save space and charging hassle.
Shop Now 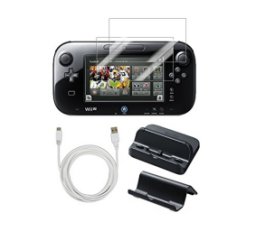 Best Bang for the Buck
PEGLY
USB Charger Kit
Bottom Line
A value-added accessory for the Wii U that gives the GamePad its own docking station.
Shop Now 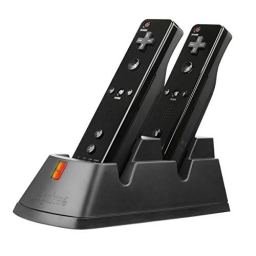 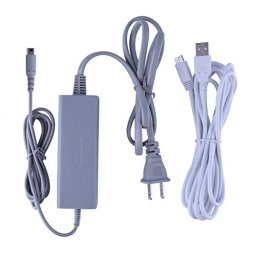 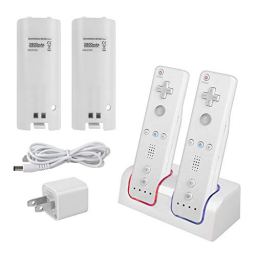 Top Pick
Kulannder
Remote Battery Charger
Bottom Line
This compact charger base does an adequate job of charging original Wii U controllers, but may not fit off-brand “Wiimotes.”
Shop Now