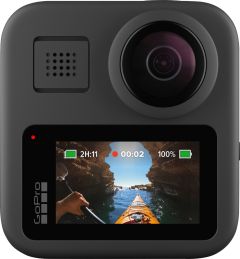 The best GoPro for expert photographers and novices alike, the GoPro MAX makes taking incredible videos and photos a snap.

The MAX is pricey.

The GoPro HERO8 Black is easy to use and supports a wealth of convenient features, making it the best action camera for your buck.

Battery life is fairly short, so you may want to keep a backup on hand. 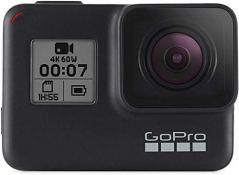 The GoPro HERO7 Black is the best buy for anyone who needs a 4K action cam to shoot slick action footage on a budget. 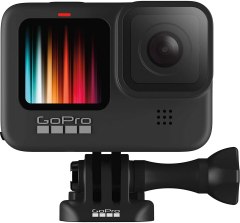 The GoPro HERO9 Black is packed with the impressive features that make it one of the best GoPro models available.

While it is an amazing camera, there are a few software glitches that still need to be worked out.

Much like Band-Aids or Kleenex, GoPro makes products so good that their brand name is synonymous with the product itself. GoPro’s portable video cameras set the standard for action cameras: they’re durable enough to withstand just about any outdoor activity, they’re easy enough for anyone to use, and they include features typically reserved for far pricier cameras.

Whether you’re looking for a straightforward video camera to capture fun selfies and memories on your next family adventure or you want to document every step of the way toward your next triathlon in 4K video, a GoPro is the perfect recording companion.

Ready to jump into the world of GoPro cameras? Here’s everything you need to know to pick the right one for yourself. And when you’re ready to buy, take a look at our top recommendations. 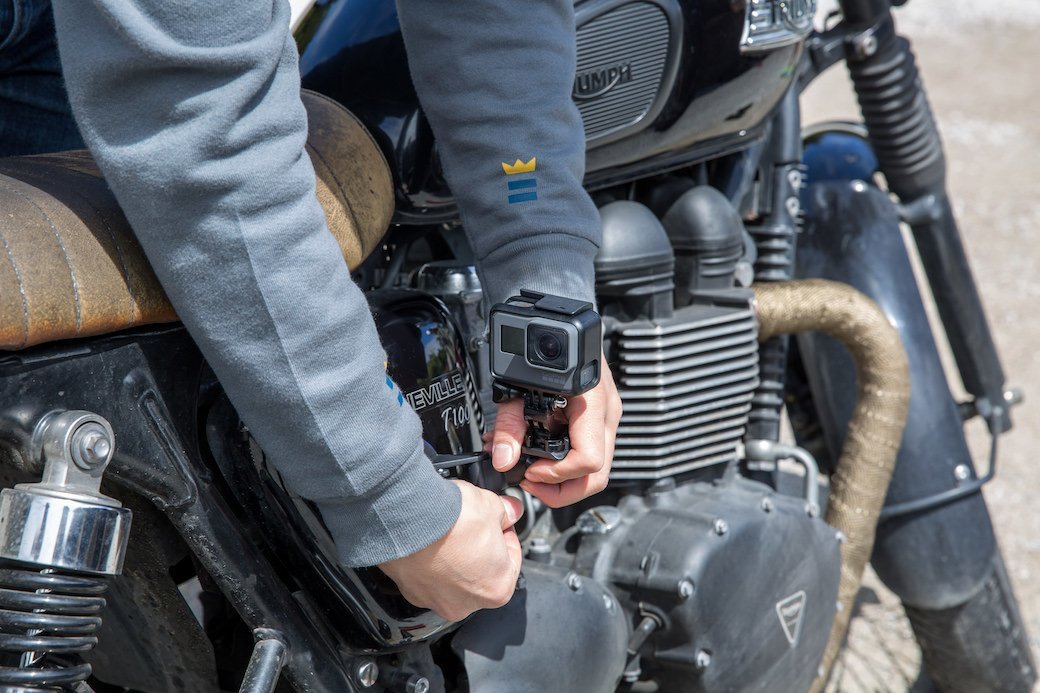 Even if you don’t own a 4K TV, it’s still worth it to get a GoPro that records videos in 4K. The videos will still play on a standard HDTV but will be downscaled for lower-resolution screens. And taking 4K videos now means you’ll have plenty to watch when you upgrade to a 4K set.

All GoPro cameras take high-quality video, but each model is designed with specific use cases in mind. Before you start comparing GoPros, consider these questions about how you’ll use yours. Then, find the model that best matches your needs.

Do you need a camera that can survive multiple days away from a power outlet?

Some GoPro cameras have user-replaceable batteries, and some don’t. If you need a camera for camping or several days away from home, you’re going to want the former. If you buy a GoPro camera with a swappable battery, you can keep extras with you, so you’ll never miss filming the perfect moment.

On the other hand, if you’ll only be using your camera for an hour or two at a time, you can save money by getting a model without a user-replaceable battery.

Do you want to tag your videos and photos with GPS locations?

Plenty of outdoor adventurers love geo-tagging their content so others can see the exact locations of their footage. Having a library of geo-tagged content can be fun for tracking all of the different locations you and your GoPro camera visit, but it’s not supported by every model, so keep track of which models do (and don’t) have GPS.

Is 4K video critical to you?

Testing GoPro cameras
We spent 15 hours researching 7 GoPro cameras before picking our top 4. We then purchased our favorite model and tested it in our lab.
STAFF
BestReviews

Some big differences exist across the GoPro product line, including features that are worth paying extra for. Here are the GoPro camera specs and capabilities to consider keeping on your short list.

GoPro is leading the charge toward consumer-created virtual reality (VR) environments, and their first VR-ready cameras make it happen with what they’ve dubbed “spherical capture.” This is pretty accurate, given the 360° field of view they record. VR is still a nascent technology, but it’s definitely the future. If you’re an early adopter, you’ll want to pick up a GoPro with spherical capture.

GoPro cameras are great at recording audio, and they each use multiple microphones to capture sound, giving you an accurate sonic mix of your subjects and their environments. Naturally, the more microphones you have, the better the resulting soundtrack will be. If you’re serious about audio, you’ll want to get a GoPro with multiple mics.

Some GoPro cameras were made for connecting on the web and even support live-streaming video so you can broadcast your adventures to all your friends. Whether you’re into video blogging your latest rock-climbing trip or just updating your followers with what you’re up to, you can do it on some GoPros.

Because it’s important to capture action without blur when video recording with an action cam, most GoPro models have built-in image stabilization. First introduced with the HERO5 Black, the feature has been improved in subsequent models and is called HyperSmooth in HERO7 and newer GoPro cameras. It includes the timewarp function that produces time-lapse videos with superior image quality. The technology makes it possible to caption images in motion with vivid details.

Did you know?
Many GoPros accept voice commands, which is perfect in situations where your hands aren’t free. All you have to do is say one of the predetermined commands, like “GoPro, take a photo.” Familiarize yourself with the list of terms ahead of time.
STAFF
BestReviews

How much does a GoPro camera cost?

Between $200 and $300, you’ll find GoPro cameras that are perfect for most people. There are great 1080p models and some decent 4K models in this price range, and if you’re willing to look at last-generation models, you’ll find a lot to like here.

If you absolutely need bleeding-edge features like spherical capture or live streaming, you’ll need to look at more expensive models. But if you just want an action camera that can take gorgeous video and go just about anywhere, you don’t need to spend more than $300.

Between $300 and $600, you’ll see GoPro’s most impressive hardware: cameras that can shoot 4K, 60 fps video, or spherical capture for creating virtual reality environments. If you’re itching for GoPro’s most innovative features, you’ll need to spend more. 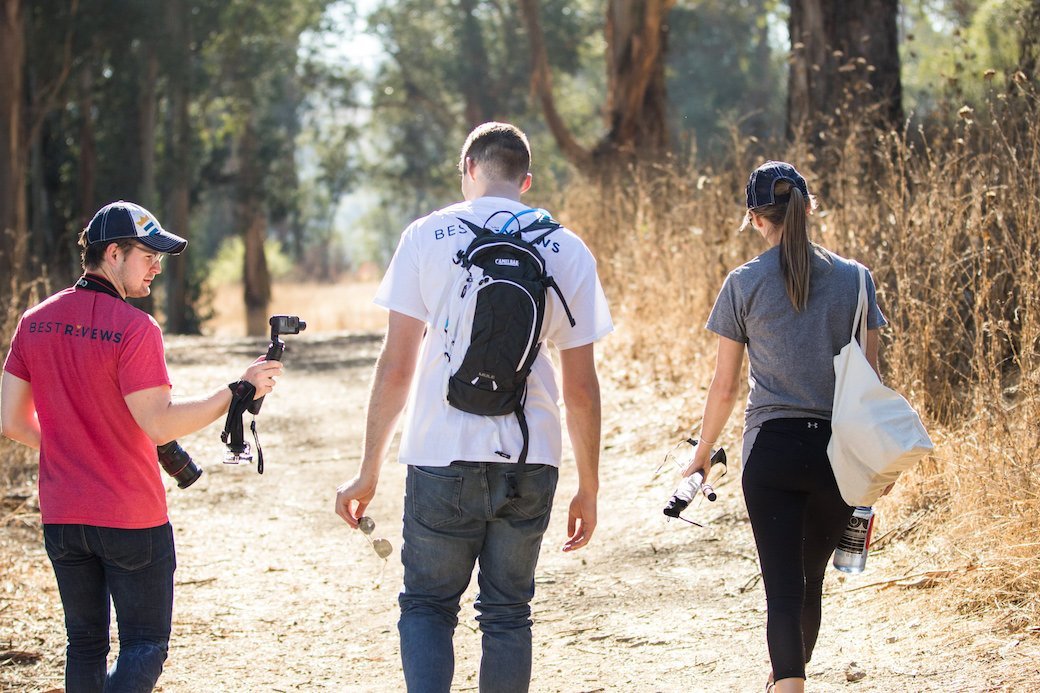 All GoPro cameras cover the basics of action cameras: they’re portable, deliver notable low-light performance, are waterproof, and are rugged enough to tag along on any outdoor adventure. They also take high-quality video.

Q. Can I wirelessly transfer photos from a GoPro camera while it’s underwater?

A. No. WiFi doesn’t work underwater. While all GoPro cameras are great at taking underwater shots, they’re all land-lovers at heart and need to be above water to do any wireless transferring of files.

A. Not without some extra gear. All GoPros have a waterproof rating that’s expressed as depth. For example, most of them are rated as waterproof to 10 meters, meaning you could swim about 30 feet down with your GoPro camera and it would still work.

However, some users want to push those limits even farther, and for them, GoPro makes the “Super Suit,” a reinforced plastic housing designed to withstand water depths to 60 meters. If you’re shopping for equipment for deep-sea photography, plan on getting a Super Suit for your GoPro.

Q. How much video can I take with a GoPro camera?

A. It depends on how big of a memory card you use with your GoPro. GoPro cameras work with standard SD cards and microSD cards, which are affordable and come in various quantities. In most cases, it pays to get a memory card with plenty of storage. GoPro videos, especially those shot in 4K, can produce especially large files that eat up storage faster than you might expect. We recommend getting an SD card with at least 128GB of available storage. 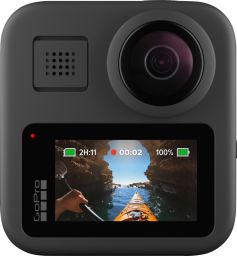 Best Bang for the Buck
GoPro
HERO8 Black
Bottom Line
The GoPro HERO8 Black is easy to use and supports a wealth of convenient features, making it the best action camera for your buck.
Shop Now 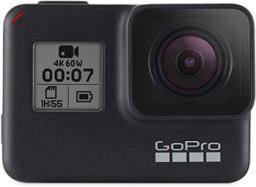 Top Pick
GoPro
HERO7 Black
Bottom Line
The GoPro HERO7 Black is the best buy for anyone who needs a 4K action cam to shoot slick action footage on a budget.
Shop Now 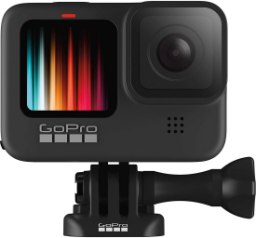 Top Pick
GoPro
HERO9 Black
Bottom Line
The GoPro HERO9 Black is packed with the impressive features that make it one of the best GoPro models available.
Shop Now 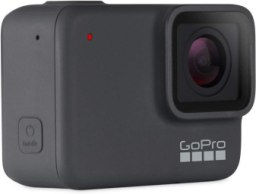 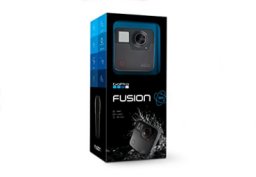 Top Pick
GoPro
Fusion
Bottom Line
GoPro continues to innovate with the first consumer-friendly camera that can film in 360 degrees. If you've ever wanted to make your own Virtual Reality videos, this is the camera to get.
Shop Now

Top Pick
GoPro
HERO7 Black
Bottom Line
The GoPro HERO7 Black is the best buy for anyone who needs a 4K action cam to shoot slick action footage on a budget.
Shop Now 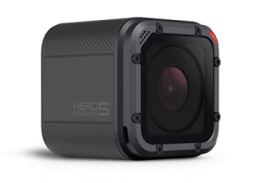 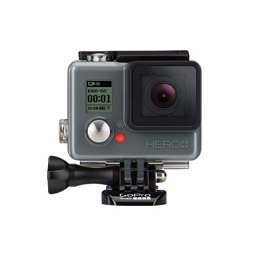 Top Pick
GoPro
HERO+
Bottom Line
Meant as a "starter" camera, this affordable model is robust enough to stick with you until you decide you need something more advanced.
Shop Now 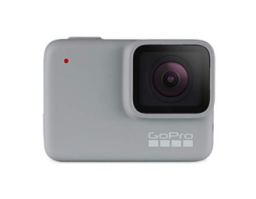