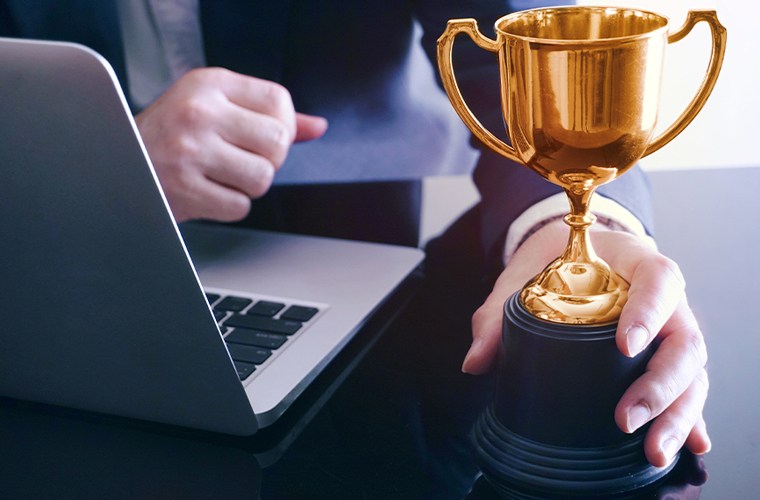 Fantasy football season has begun and so has the race for the trophy. And potentially, depending on your league’s traditions, the race to avoid a trophy. Fantasy football continues to grow more popular with every National Football League season. As such, the range of trophies available is staggering. There’s more to picking a good one than just design, such as whether it leaves room for engraving and its weight (should your league members live too far apart to hand your trophy over in person).

There are two kinds of fantasy football trophies: those for first place and those for last.

First-place trophies are most common, as most leagues don’t have any “punishments” for coming in last place. These typically feature football-related iconography, such as players, helmets or footballs, but simple plaques are also popular. Some even mimic the Vince Lombardi Trophy given to each year’s Super Bowl champion.

Last-place trophies are meant to embarrass the “winner.” Toilets, gilded poop and trash cans are common. More adult-themed trophies are also popular, namely iterations of the Sacko from “The League,” a sitcom that aired from 2009 to 2015 that was responsible for an explosion of fantasy football popularity.

Depending on your league’s traditions, you may pass the same first- and last-place trophies on to the reigning winners or award a brand new one each year. Both styles have aspects to consider.

For trophies that are passed on each year, first ask yourself how they will be handed off. If you can hand them off in person, there are no restrictions. However, if your league mates are scattered across the world, you need trophies that are easy to ship. The best solution for this scenario is plaques, as they’re flat and lightweight. Additionally, you need to decide if you want the winners’ names engraved on the trophies. If so, make sure there are enough slots to hold years' worth of names to put off needing a new trophy.

For trophies that are one-time awards, it’s best to stick to smaller ones. This way, repeat winners don’t run out of shelf space. Most small trophies also have a section for engraving, but you can skip this if you’re trying to save money each year.

This Lombardi Trophy replica is perfect for leagues that pass down the first-place trophy to the next winner. It is 4 pounds and 14 inches tall but doesn’t have space for engraving.

This trophy is more stylish than most with its helmet-in-a-football design, plus a custom engraved plate is available for free on request from Decade Awards. It is 6 inches tall and weighs 15.3 ounces.

This trophy is nice and flashy, so it's perfect for leagues that like to show off their skills and football knowledge. It is 7.5 inches tall and comes with a free custom engraved plate on request from Decade Awards.

This is a great trophy for long-running leagues because it has space for 12 engravings, the first of which is free. The armchair-bound footballer flanked by golden footballs makes it clear what the trophy is for.

Championship belts aren’t common in fantasy football, which makes them perfect for setting your league apart from the rest. It’s especially good for leagues that watch the games together. It even has two cupholders.

Another atypical trophy perfect for leagues that regularly meet up during the season, this chain is extremely customizable. The seller can even help you design the center area into something truly unique.

This simple trophy playfully pokes fun at fantasy football enthusiasts with its design. It is 9 inches tall and has space for four lines of engraving that are done for free.

This is among the best trophies for leagues that have been run for years and will continue to be run, as it has space for 19 engravings. It comes in four colors and three sizes.

This trophy isn’t too embarrassing for losers, thanks to its straightforward design and small 6-inch stature. It comes with a free engraving plate on request.

Coming dead last in your fantasy league certainly feels like getting caught with your pants down, so this trophy makes for a cruel — or hilarious if you didn’t come last — reminder of one’s failure. It comes with a free engraving.

This is an excellent budget last-place trophy. It not only costs just $15 and includes free engraving, but it’s also interactive, so guests of the last place “winner” can take part in the rest of the league’s mockery and worsen said winner’s shame.

How embarrassing the rainbows-and-unicorns design is will vary by person. However, the shame of loss will still sting, especially if there’s a last-place punishment in your league that enforces this belt to be worn at certain times and events.

This plunger trophy is 12.75 inches tall to make sure it can’t be hidden easily. It comes with up to three lines of custom engraving for free.

This trash can-topped trophy is an excellent representation of the loser’s skills. It comes in single-, six- and 12-year versions and includes free engraving.

This trophy is a little crass, which makes it perfect for a certain subset of fantasy football leagues. It also comes in single-, six- and 12-year engraving with a free engraving to get you started.

Jordan Woika writes for BestReviews. BestReviews has helped millions of consumers simplify their purchasing decisions, saving them time and money.