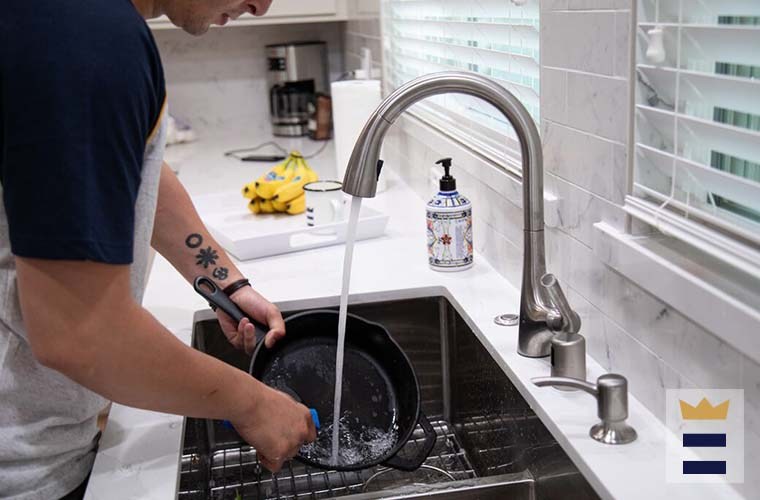 How to remove rust from cast iron cookware

Cast iron is popular for a few reasons. It’s remarkably versatile — good for baking, frying and boiling a huge variety of foods. It can also claim impressive nonstick qualities, as long as it’s perfectly seasoned and you take good care of it. It’s also about as durable as they get, able to withstand drops with ease, and will still work great for years.

However, if the seasoning wasn’t applied properly or if you leave a pan soaking in water, cast iron can rust relatively quickly. It’s not too hard to get rid of surface rust with steel wool and some scrubbing. Heavy corrosion, though, will require additional steps and considerably more work.

Rust is a type of corrosion that occurs when iron or one of many iron alloys comes in contact with oxygen and moisture for an extended period. Rust eats away at the surface of the metal, eventually causing significant pitting. A rusty cast iron skillet isn’t dangerous to your health, but it’s hard to cook with consistently and can result in discolored and off-tasting food.

How do cast iron pans get rusty?

Most commonly, cast iron pans develop when they’re soaked in water for too long or cleaned but not dried properly. Some cast iron pans, however, don’t quite have the perfect layer of seasoning to keep the moisture out, especially in humid climates. If it’s usually humid or wet where you live, you’ll have to pay extra attention to your cast iron to keep it in perfect shape.

If you’re able to remove all the rust with steel wool or a metal cast iron cleaning pad, then your job is almost finished. You still need to re-season the pan lightly by coating it with a thin layer of oil and baking it for an hour at 500 degrees. Again, you can use a light, processed oil for this, but you can also opt for a specialty cast iron seasoning oil.

Nonetheless, there are plenty of scenarios where rust can seemingly ruin a cast iron pan. If your kitchen’s flooded or you’ve unearthed an old collection of cast iron that was in storage, for example, you might find a pan that looks beyond help. Don’t worry, though — you can fix it with a little elbow grease and know-how.

If your cast iron is corroded to the point where you can’t scrub it off with steel wool, you’ll need something acidic. Unlike the solvents required to clean some tools and hardware, all you need are some safe and common household chemicals to remove some of the deepest rust from old cookware.

You’ll need enough white vinegar to submerge the entire pan. Mix it with equal parts water, and pour the mixture into a pan or sink that the cast iron pan fits in. Make sure to use a nonreactive container for soaking, such as a stainless-steel sink.

Scrub the rust off as soon as it’s easy to

After submerging the cast iron fully, grab a brush with metal bristles and some disposable gloves. Every 20 minutes, give the pan a quick scrub to see how easily the rust comes off. There should be a point where the rust is relatively easy to scrub off. At this point, put in a little elbow grease and remove the corrosion with your metal-bristle brush. Don’t wait for the rust to disintegrate or flake off in large chunks, as by that point the vinegar will also be eating through the metal.

Once the entire layer of rust is gone, you need to re-season the cast iron. Thoroughly wash and dry the piece with dish detergent and water. Apply a light coating of oil and place the cast iron in the oven at 450-500 degrees. After an hour, pull it out and let it cool. You can repeat this process multiple times to ensure a thick, reliable layer of seasoning with the best possible nonstick properties. Typically, oils such as flaxseed oil that are high in omega-3 fatty acids are the easiest for starting the polymerization process that creates the seasoning.

Q. How do you clean a cast iron pan?

A. A quick wash with regular dish detergent is enough to clean a well-seasoned pan after use. If there’s food caked onto the surface, boil a small amount of water for a minute or two to soften it. That way you won’t accidentally scrub off any of the seasoning. Don’t let it boil dry, though. That encourages rusting. After it’s clean, dry it thoroughly and apply a thin layer of oil.

Q. How do you repair heavily pitted cast iron?

A. If rust has eaten away so much metal that it’s not flat enough to cook on anymore, it is possible to fix. You’ll need a hand drill and a wire brush bit or coarse grinding wheel bit.

As long as the cast iron was thick enough to begin with, you should be able to smooth out major pits and divots without damaging the integrity of the metal. A smoother cooking surface can sometimes improve nonstick properties in the end, but don’t go too far with it. If your cast iron is too smooth, the seasoning won’t stick.

Exercise caution if you do need to make this kind of heavy-duty repair. Power tools are always hazardous and require extra attention. It’s also important to wear a well-fitting mask to keep microscopic iron particles from irritating your nose and throat.

Q. What’s the best way to protect against rust?

A. The most important defense against rust is the seasoning. In terms of cast iron, seasoning refers to a layer of plasticized oils that covers the entire surface. Most cast iron pans come from the factory with a layer of seasoning already applied. The factory seasoning usually lasts most people for a year or more before it starts to corrode.

The best way to preserve a layer of seasoning is to avoid soaking cast iron in water, burning food, or scraping the pan with metal utensils. A seasoning layer will also get brittle and flake off if it’s left to break down in water, especially if it’s soapy water.

With that said, though, you don’t have to baby a well-seasoned pan, as a quality seasoning job can withstand dish scrubbers with dish detergent and moderate kitchen tool use. It’s best to exercise caution, though, to avoid making deep gashes with steel wool or a metal spatula. A quality seasoning layer does a long way toward preventing a majority of issues that cast iron owners encounter.