Not only will you like this classic granulated sugar that has a delicious flavor, but you'll also appreciate that it's certified organic and produced without artificial ingredients. Non-GMO.

A few customers reported small black or brown particles mixed in with the sugar.

Versatile sugar by one of the most recognizable brands on the market. Comes in choice of several package options, including canisters, bags, and multi-packs.

Some packages arrived damaged, and a few had tiny black specks in them. Price may have gone up recently, but is still lower than gourmet sugars.

Unrefined sugar that tastes great and works well for sweetening. However, if you need sugar for baking, check out others on our shortlist.

Ideal for those who prefer less processed foods, as this sugar is raw and natural. Has a rich flavor that is delicious in coffee and tea. Adds a nice touch when used to top cookies and candies. Non-GMO.

Not ideal for baking and cooking, as it can leave recipes dry or crunchy. Several consumers received out-of-date boxes.

From the outstanding flavor to the company's thoughtful production practices, you can't go wrong with this pick if you need brown sugar.

Rich, bold flavor is the hallmark of this tasty brown sugar that's high in natural molasses content. Fans love it for baking and barbecuing. Non-GMO, organic, and fair trade.

Frequent users gripe that the sugar changed in color and flavor. Some packages contained sugar that was hard and didn't appear to be fresh.

If you love to bake with sugar, this is the option to choose. The extremely fine granules will help you perfect your favorite sweet recipes.

Dissolves thoroughly and mixes well, thanks to the fine grains that make this sugar well-suited for baking purposes. Nice sweet flavor. Available in multi-packs.

Cartons are prone to leaking, and few arrived spilling sugar before customers could use them.

Whether your daily sugar intake is limited to not much more than an occasional teaspoon of sweetener in your coffee, or your sweet “tooth” is better described as sweet “teeth,” it’s undeniable that sugar is a major player in most people’s diets, and for some, it’s a big source of daily calories. There’s no doubt that it shows up in virtually every type of processed food you can think of, from cereal to spaghetti sauce.

A yen for sugar appears to be hardwired into our brains. In fact, studies have shown that even newborns have an affinity for sugar, and the sweeter the liquid, the more they will drink.

Chances are good that you have a bag of sugar (or two) in your pantry right now. But perhaps you’ve been wondering about the various forms of sugar available on supermarket shelves, or you’re considering a switch to artificial sweeteners. If so, here’s what you need to know about sugar. 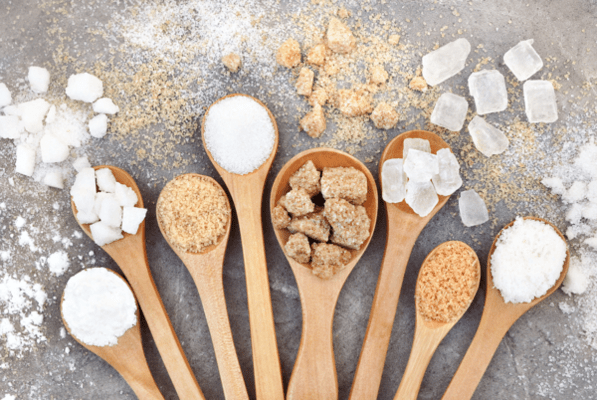 One teaspoon of sugar contains around 16 calories.

The white granular sweetener commonly called sugar or table sugar is more technically referred to as sucrose. Like all forms of sugar, it’s a carbohydrate formed from carbon, hydrogen, and oxygen molecules. All green plants, including fruits and vegetables, naturally synthesize sucrose from simpler forms of sugar that include glucose and fructose.

When you consume sucrose, your body breaks it back down into glucose — the primary source of energy for all of your cells — and fructose, which is primarily metabolized by the liver and stored as fat if the liver can’t keep up with fructose consumption. That’s why too much high-fructose corn syrup can easily lead to weight gain.

Peruse the baking aisle of your local supermarket and you’ll find quite a few forms of sugar on the shelves, along with a variety of other sweeteners both natural and artificial. The following are some of the most common.

Confectioner’s sugar: This is granulated sugar that has been ground down to a fine powder, thus its alternate name of powdered sugar. Usually, it’s mixed with a little bit of cornstarch to prevent clumping. Confectioner’s sugar can be sprinkled onto baked goods for a bit of decorative sweetening or dissolved in fats or liquid to create icing or frosting.

Castor sugar: More finely ground than granulated sugar but not as fine as confectioner’s sugar, castor sugar dissolves easily in liquids, making it a popular choice for use in cocktails or other sweetened drinks. It’s also often used in delicate baked goods, frosting, and icing.

Granulated sugar: The most commonly used sugar, this is the refined, multipurpose sugar that’s sourced from sugarcane or sugar beets. Typically, when people refer to sugar, this is what they mean. You can cook with granulated sugar or use it as is to sweeten beverages or other foods.

Sanding sugar: In between granulated sugar and coarse sugar in size, sanding sugar is another sweetener used to decorate baked goods, such as cookies, after they’re removed from the oven. It is available in many different colors.

Coarse sugar: This specialty sugar has much larger crystals than granulated sugar and is used to decorate baked goods. It is available in a wide range of colors.

Cane sugar: Sourced entirely from sugarcane, cane sugar is a little less processed than regular granulated sugar. It has slightly larger granules and a darker color, but it can be used in the same ways as granulated sugar. Many brands of cane sugar are organic, which offers no nutritional benefits over conventionally grown sugarcane, but it does mean that the plants were not treated with synthetic fertilizers or pesticides.

Light brown sugar: This is granulated sugar with the molasses added back in after processing, but it contains fewer molasses than its darker counterpart. The flavor is slightly less intense than dark brown sugar, but you can use the two interchangeably.

Turbinado sugar: Also called raw cane sugar or “sugar in the raw,” turbinado sugar is basically cane sugar that is less processed and still has most of its naturally occurring molasses. This gives turbinado sugar a darker color, slightly more molasses flavor, and larger granules than cane sugar. Use it just like granulated or cane sugar.

Muscovado sugar: The least processed form of sugar, muscovado sugar is even less refined than turbinado sugar and retains all of its molasses. This gives it a dark color, a slightly sticky and sandy texture, and the strongest flavor of any type of cane sugar. It’s used in baked goods, barbecue sauces, and other savory dishes.

The average American consumes over 150 pounds of sugar per year.

Stevia: Derived from the leaves of the stevia plant (Stevia rebaudiana) stevia has no calories, is 200 to 400 times sweeter than cane sugar, and has an aftertaste somewhat reminiscent of licorice.

Honey: Bees produce honey as a method of storing food for winter months. Sticky-sweet honey is a thick liquid with a distinctive flavor influenced by the types of flowers visited by the bees. The primary form of sugar found in honey is fructose. Honey contains a wide range of antioxidants, trace amounts of vitamins, and around 20 calories per teaspoon.

Monk fruit: Like stevia, monk fruit extract is a plant-derived sweetener with no calories. It’s around 200 times sweeter than cane sugar and has a slightly fruity taste, making it a good choice for use in smoothies and other fruity beverages but not so good for sweetening coffee or tea.

Agave nectar: Extracted from the agave plant, agave nectar’s consistency and taste are similar to honey.

Maple syrup: The boiled and refined sap of maple trees, maple syrup has a distinctive flavor that’s perfect with pancakes, waffles, and other baked goods.

Molasses: A by-product of cane sugar processing, molasses comes in light and dark varieties and has a strong, distinctive taste. It’s often used in gingerbread and other baked goods.

So-called “diet” and reduced-calorie foods often contain artificial sweeteners, which have no calories and are often sweeter than natural sugar. While generally considered safe, artificial sweeteners have gained considerable notoriety over the years because some studies have shown they might have potentially harmful effects on health. These three are the most common.

Aspartame: Sold under the brand names Equal and NutraSweet, aspartame is not heat stable and so is usually used to sweeten diet beverages like soda. It’s a highly processed sweetener made from amino acids, the building blocks of protein. Aspartame is around 200 times sweeter than cane sugar.

Saccharin: Sold as Sweet ‘N Low, saccharin is a synthesized chemical with a taste that’s up to 500 times sweeter than cane sugar.

Sucralose: Sold as Splenda, sucralose is sucrose that’s been molecularly combined with chlorine. Unlike aspartame, sucralose is heat stable and so can be used in baked goods and other cooked foods. It’s up to 600 times sweeter than regular sugar. 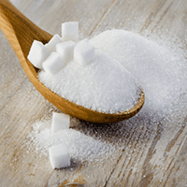 DID YOU KNOW?
Sugarcane and sugar beets are the sources of granulated sugar, which is heavily refined after extraction from the plants.
STAFF
BestReviews

As a basic supermarket commodity, sugar isn’t very expensive. A 4-pound bag of granulated sugar typically costs well under $5. You’ll pay a little more for other forms of sugar, however. A 2-pound bag of brown sugar is generally around $3, while a 1-pound container of muscovado sugar can be as much as $10.

While tasty, sugar contains no nutrients, only calories. This is true no matter which form of sugar you use. 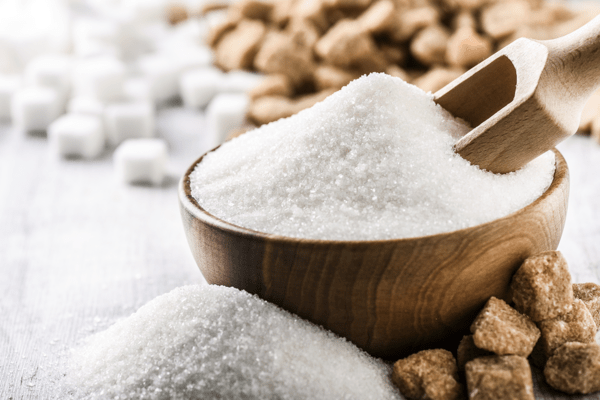 Sugar is a carbohydrate, as are starch and fiber.

Q. How many calories does sugar have?

Q. Are carbs and sugar the same thing?

A. While all sugars are carbohydrates, not all carbohydrates are sugar. There are two other nutrients that are also carbohydrates: starch and fiber. Starch, found in grains, potatoes, rice, beans, pasta, corn, sweet peas, and root vegetables, is a more complex carb than sugar and is metabolized in your body more slowly, thus preventing the abrupt rise and fall in blood sugar often triggered by sugar consumption. Fiber, found in many fruits and vegetables, as well as whole grains, nuts, seeds, and beans, is not digestible, but it helps your body keep the digestive system healthy, maintain a steady blood sugar level, and control cholesterol levels.

Q. Can you overdose on sugar?

A. You might have heard of death by chocolate, but in actuality, while consuming too much sugar has a wide variety of unhealthy side effects, including weight gain, high blood pressure, and diabetes, it’s unlikely to actually kill you directly.

Although there are no real-life case studies, scientists at the American Chemical Society calculated the “Lethal Dose 50” for sugar, meaning the amount needed to kill at least half of a test population after consuming a large amount in a single sitting. According to their calculations, a 180-pound human would need to eat around 5.5 pounds of pure sugar in one sitting to have a 50% chance of death from overdose. So you can safely enjoy your sweets in moderation.