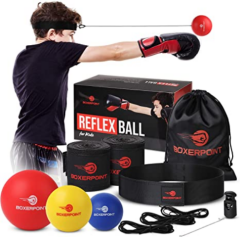 This beginner-friendly set includes equipment for 3 levels of reflex training and comes with a carry case.

Reflex balls , made with soft PVC, come in different sizes and weights to offer a different types of challenge. They're brightly colored to help fighters focus. Headband is one of the more comfortable ones on the market.

Only recommended for ages 8 and above, and even then, some people had safety concerns with the device. 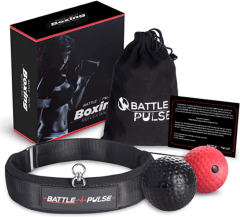 Users appreciate this set’s headband, which is durable, adjustable and is lined with an ultra-absorbent material.

Headband has light padding and its outer layer has durable nylon webbing. Reflex balls are texture so they don't slide off gloves or fists. String system is designed to move around the head effortlessly without getting tangled.

Comes with two reflex balls, and some people didn't like the fit of the headband.

American Fist’s set of boxing reflex balls are sturdily constructed, simple to use, comfortable to wear, and engaging to master.

A little pricey, but it’s a premium set. Most appreciated for seasoned fighters. 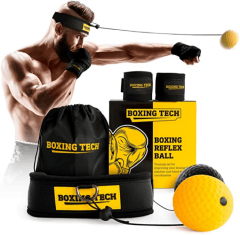 Ideal for fighters of all levels, this high-quality reflex set offers two difficulty levels and comes with wrist wraps.

Sleek black and yellow set. All pieces are good quality and will last through plenty of practice. Wrist wraps are designed better than most that are included in these sets. Headband is lined with moisture-wicking material.

Some people said the cord was weak and snapped within a few weeks of training. 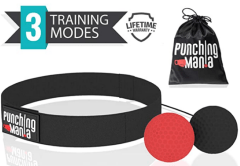 A no-frills option, it’s an ideal choice for those seeking a set that is travel-friendly and easy to use.

Headband is easy to adjust with Army-grade Velcro. Elastic strings have proven themselves durable in several product tests. Reflex balls are dense yet soft, and glide through the air. Small set fits in most bags or luggage.

Lacks the accessories and quality construction seen in other reflex ball sets.

At first glance, a boxing reflex ball may look strange and even silly, especially to those new to the sweet science of boxing. It is, after all, a headband with a ball dangling from it on an elastic band. However, this little device works wonders in improving depth perception, reach, coordination, and reaction time — all key skills for students of any martial art. 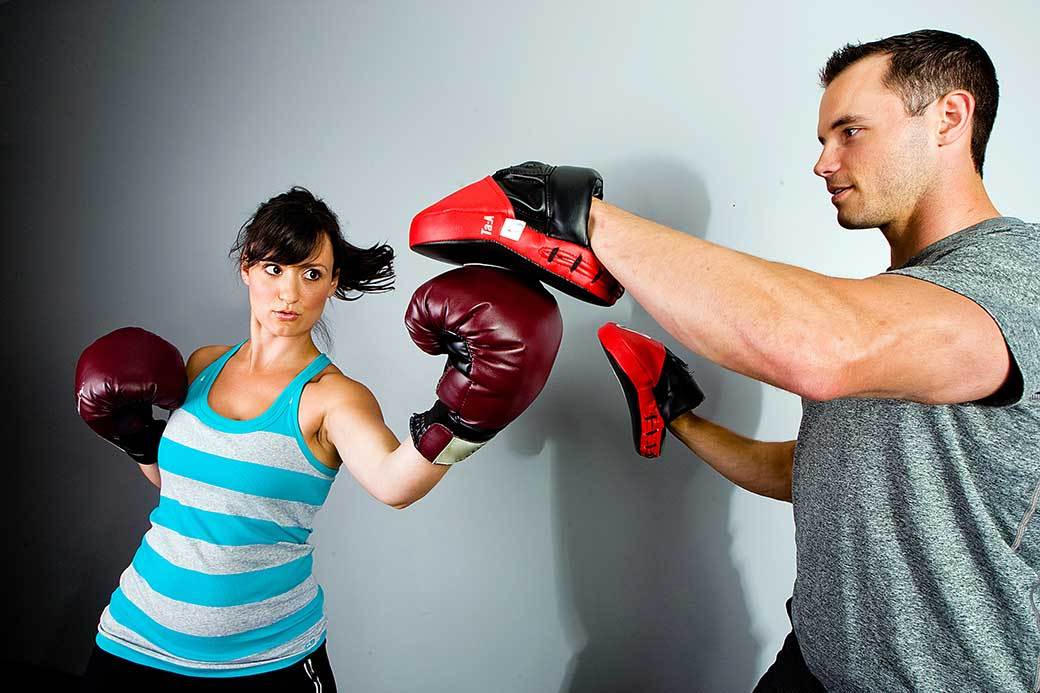 The boxing reflex ball is an improvement on an age-old training technique of bouncing an untethered rubber ball on the ground and batting it downward; with the reflex ball and headband, boxers react to a more realistic lateral force at the same level of an opponent’s punches.

Who should buy a boxing reflex ball?

Boxing reflex balls look simple but are designed to train complex movements and reactions. While they may not be the best tool for teaching proper movement and punching form, they are a challenging, active way to teach quick reaction. For boxers with a strong grounding in footwork and a good sense of timing, a boxing reflex ball can enhance their skills. For those with no interest in fighting, reflex balls are a great conditioning tool; users can improve overall hand-eye coordination and, by adding footwork, will find themselves in the middle of a challenging workout.

A big advantage of the boxing reflex ball is that it introduces a high level of unpredictability to the training regime. Other static training tools, like heavy bags, speed bags, and double-end bags, have only so much impact on a fighter’s reaction time and can lull the boxer into training at a metronome-like pace. While timing is an important skill, doing too many routine movements over and over can make a fighter predictable to an opponent. The reflex ball changes up the training game.

However, this unpredictability can cause quite a bit of frustration for the first-time user. Missing the reflex ball on the return may mean getting hit in the face with the ball — funny at first, but not so much after several tries.

This piece of canvas or nylon is the anchor for the boxing reflex ball. It fits around the head and is secured with either a hook-and-loop closure or an adjustable snap fastener at the back of the band. It should be comfortable to wear yet fasten securely so that it doesn’t loosen and slip off during a training session.

This connects to the headband and the reflex ball at either end. The length and thickness of the elastic band determines how far the ball travels after being hit and how quickly it snaps back toward the user. Different thicknesses can increase the challenge of the boxing reflex ball, which improves overall skills.

This is a firm rubber or soft foam ball that is attached to one end of an elastic band. It responds almost instantly to light jabs or a bat from an open palm. Training sets often include two or three types of reflex balls, sometimes in different sizes, for different training challenges.

Typically, each rubber ball in a set is permanently attached to its elastic band, but the other end of the elastic can be attached or detached from the headband in most sets. The attachment point should be sturdy, as should the clip that secures the elastic to the headband.

"Can you do 10 in a row? Completing consecutive jabs with a boxing reflex ball can be quite a challenge."
STAFF
BestReviews

Inexpensive: Boxing reflex balls can be found for as little as $9, although the quality of the materials may be lower — such as a weaker elastic band that may snap after a few uses — and the set may have fewer options and accessories.

Mid-range: A wider range of reflex ball sets can be found for just a few dollars more, ranging from $13 to $19, many with at least two reflex balls and a wider choice of headbands.

Expensive: The priciest boxing reflex balls offer extra-durable headgear and more accessories, like three levels of reflex balls, and can cost $40 or more.

Caution
Keep the set out of direct sunlight and away from heat sources like clothes dryers or stoves — heat can damage many of the set’s components and diminish its effectiveness.
STAFF
BestReviews 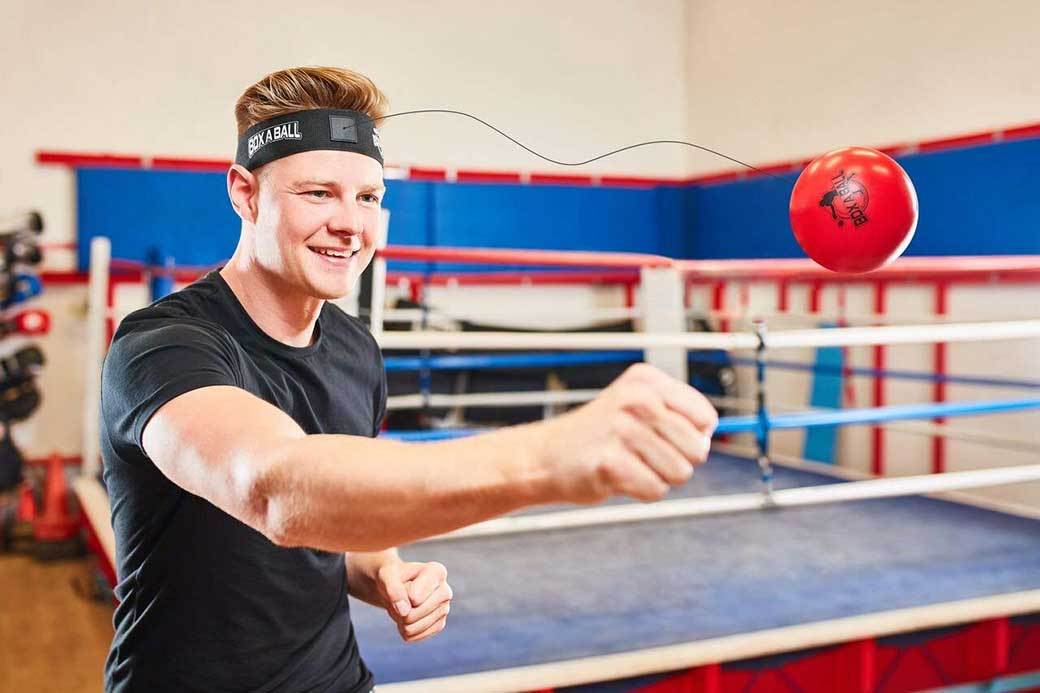 The length of the elastic cord can be shortened to make the challenge harder by doubling over the cord, tying it off so it doesn’t slip, and hooking both loops to the attachment clip.

Q. My knuckles and the backs of my hands get bruised when using the boxing reflex ball. How can I prevent this?
A. Don’t hit the reflex ball too hard. You should just use a light tap each time and intercept the ball as it snaps back along the elastic band. If you have a set of reflex balls, use the larger, softer ball. Or if the balls are the same size, choose the ball that is attached to the longer, looser elastic band. These types of balls or elastic bands are easier to jab at and control. If your hands are still sore or bruised, wear wraps or lightweight gloves when using the reflex ball. Additionally, spend more time training on other boxing equipment as directed to condition your hands.

Q. Can I use both of the balls included in my reflex ball set at the same time?
A. You’re free to use the boxing reflex ball set almost any way you choose, and as long as you’re able to securely attach both balls to the headband, go for it. The same principles apply: use a light touch, stay focused, and be prepared to dodge a rapidly returning ball.

Q. What are the benefits of using a boxing reflex ball?
A. Using a boxing reflex ball can greatly improve hand-eye coordination, making it an effective tool not just for fighters but for anyone who wants to actively improve this fundamental skill. Unlike a floor-mounted reflex bag or a double-ended ball, the target area of a reflex ball is very small and requires tight focus to hit correctly and intercept on the return. And because the reflex ball set is attached to the body, users can move in any direction they want, as far as they want — a great way to build spatial awareness and improve balance and agility. 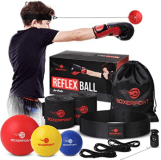 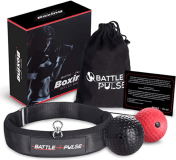 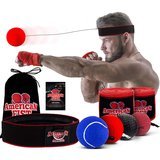 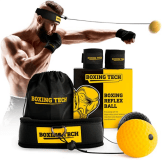 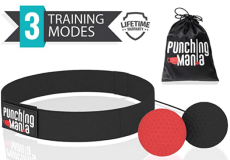