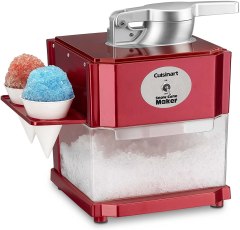 Top-fed ice crusher that turns on with a simple flick of the switch. Easy to put together, meaning shaved ice is always just a few minutes away. Make 4-5 cones in under a minute. Several buyers note the simple user interface.

Ice is slightly coarse for some users' liking. 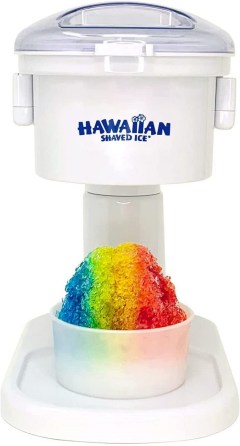 A basic option that prepares ice for snow cones almost as effectively as costly machines.

Ice may need to be broken down into smaller pieces to work in machine. 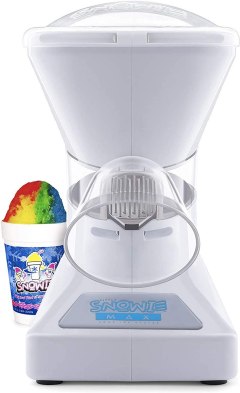 Made by a company known for quality machines, it has the build and performance to make perfect snow cones.

Machine can run a little loud when in use.

Complete with a variety of accessories, this is great for backyard parties or small events. Cart has wheels so it’s easily portable and is large enough to hold ice for up to 72 snow cones. Top can be removed from the base of cart so you can use it on a table.

Blades can become dull over time and may not shave ice as finely. 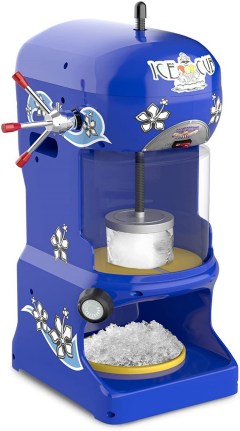 The size and efficiency of this snow cone machine make it a great kitchen gadget and a great addition to any house party.

Shaving up to 6 pounds of ice at once in just seconds, the high-quality blade and motor in this snow cone machine are efficient. Strong stainless steel construction makes it built to last, and it's great for at-home use.

Due to the sharpness, speed, and power of the blade, this machine should not be used by children. 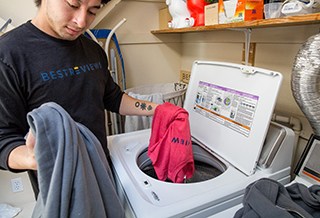 Snow cones are an all-around crowd pleaser. They’re refreshing, tasty, and an excellent ice cream alternative. Why depend on a snow cone stand when you can buy your own machine? Snow cone machines are a great investment for the home chef and will surely make your home a summer destination.

Snow cones have fewer calories than ice cream and are vegan and dairy- and gluten-free. Before you decide on a snow cone machine to buy, there are important factors to note. Snow cone machines are manufactured in a range of styles — some are meant to serve a few people while others have industrial serving capacities. You should also consider the machine’s ease of use and the texture of ice it creates.

Before you treat your family to a snow cone machine this summer, read our shopping guide and top recommendations to make an informed purchase. 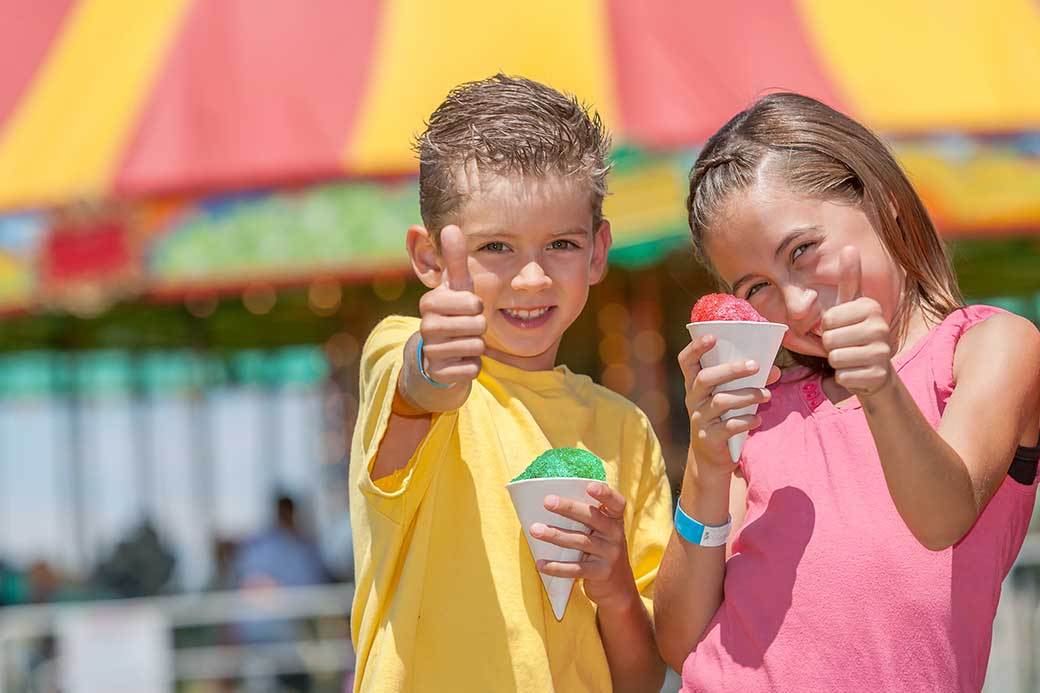 The good news is, snow cone machines aren’t terribly difficult to operate. Pour your bags of ice into the machine’s ice receptacle. Then, either manually or automatically, the machine’s blades chop the ice, dispensing it into a large tank. Take a scoop and heap some ice into a paper cone. Add your desired snow cone syrup, and your snow cone is ready to eat.

Choosing one machine over another is a matter of taste. Both deliver a refreshing treat, but a snow cone will stand up better to heat.

The capacity of a snow cone machine is measured as how much ice it can produce in an hour. For reference, it takes about five ounces of ice to make a snow cone. This may be less of a concern if you’re using a snow cone machine for an occasional snack, but if you plan to bring it out for parties and larger gatherings, consider a machine that can operate on at least 100 pounds of ice per hour.

Of course, speed is crucial — the faster the machine works, the more snow cones it’ll be able to produce.

For snow cone machines, there’s no shortage of styles to choose from. Some may like a more vintage look — a machine with a clear snow cone tank, a slot for holding snow cones, and a rear wheel, which is great if you plan to show it off to guests. There are more modernized, streamlined styles, too. Red and white are popular colors for countertop snow cone machines. No matter your aesthetic, there are enough styles to please all tastes. Don’t forget that design should come secondary to the machine’s functionality and effectiveness.

While snow cone machines are pretty straightforward in terms of operation, some are more user-friendly than others. A quality snow cone machine will come with clear instructions. Some machines are manual, which means you have to push a button or turn a mechanism to crush the ice. Other machines crush ice with the simple press of a button.

The machine’s blades are quite sharp, so be sure there’s a lid that safely covers them. Some blades won’t spin until the blade cover is closed. Those are safer, especially if you have kids who want to help operate the machine.

To get your money’s worth, it’s best to go with an established snow cone maker. Brands like Cuisinart are long-trusted in the kitchen appliance domain. You may also consider commercial-made brands. While unfamiliar to you, they’re capable of producing a high quantity of quality snow cones, an they’re made to last.

It’s common for snow cone machines to come with other paraphernalia such as paper cones, a scoop, straws, and syrups. Many big box stores sell paper cones and syrup, so they’re easy to replace.

Snow cones vary widely in price, depending on size. If you’re searching for a no-frills machine you can use in your kitchen, expect to pay between $20 and $250.

Inexpensive: Machines in the $20 to $50 range will fit on your countertop. These snow cone machines are on the smaller size and are often kid-friendly. Some may churn enough ice to make just one cone at a time, although machines on the higher end can produce more. A $30 snow cone machine makes a great gift for the kids in your life.

Mid-range: If you have a little more to spend, search in the $50 to $75 range. At $50, you pay for a machine that likely has more tools included, like spoons, an ice shaver, and a wider variety of syrups.

Expensive: Machines over $100 are professional-grade items from reputable brands. Even if they’re made for a kitchen countertop, the manufacturers specialize in snow cones for commercial use.

Expert Tip
For a healthier alternative, you can top your snow cone with fresh strawberries, pineapple, cherries, or other fruits.
STAFF
BestReviews

Along with the snow cone machines we suggested, we like Victorio’s Manual Snow Cone Machine. This portable machine is fun for all ages and produces chunkier ice. It’s not just great for snow cones, either. You can make frappuccinos, frozen margaritas, and slushies. The blade is high in quality and holds up to daily use. Since it is a manual machine, Victorio’s isn’t for anyone with physical difficulty churning the ice. While it doesn’t come with paper cones or syrups, this machine does come with ice molds.

We also like Vivohome’s Electric Ice Crusher. This sleek machine can grind 143 pounds of ice per hour, so you’ll have shaved ice in a matter of seconds. Note that the ice texture is lighter and fluffier than that of a snow cone. The commercial-grade stainless steel is rust-proof and made to last for years. Vivohome’s machine is a bit on the messier side, so we recommend putting a styrofoam cup in the ice dispensing area. 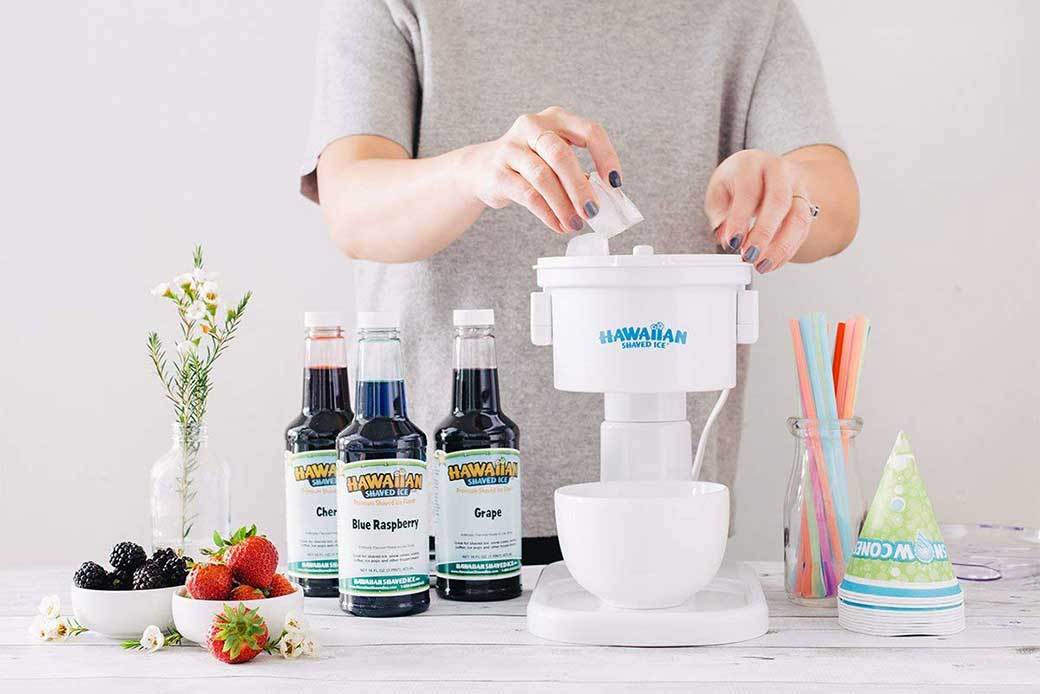 A 20-pound bag of ice yields about 60 standard-size snow cones.

Q. How long will a snow cone machine last?
A.
This largely depends on the type of machine you buy, how well it’s maintained, and how often it is used. Machines from manufacturers who specialize in commercial-grade appliances can last up to ten years, and sometimes more, with proper care. Many non-professional snow cone machines include a two-year or three-year warranty. 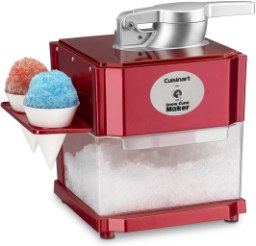 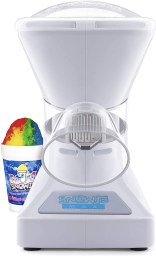