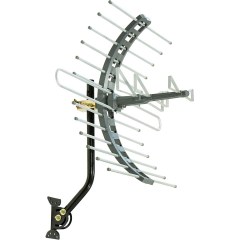 This outdoor TV antenna is a reliable way to get your local over the air channels with crystal-clear reception.

Inexpensive. Made for 4K and HD channels. Crisp reception from TV stations 70 miles away. Simple to install in the attic or on a rooftop. Weather-resistant. Delivers channels to multiple TVs. 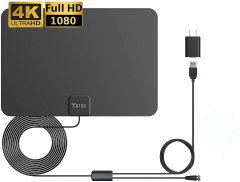 A thin, light, flat indoor HDTV antenna with a generous length of cable and included amplifier. 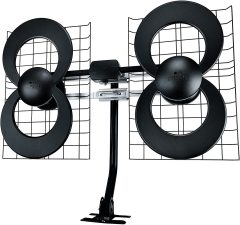 This sturdy and powerful HDTV antenna is worth your consideration if you live in a rural area.

Somewhat pricey. Can look ungainly on your house. 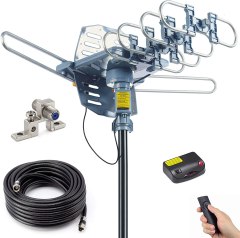 This outdoor antenna comes with a rotational motor and its own remote control.

Doesn't come with a mounting pole. Recommended height 30 feet over the ground. 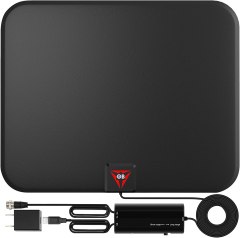 This indoor antenna with amplifier boasts an impressive range and comes with a long cable.

While most of us think of our cable box or streaming service as the primary source for our favorite TV shows and movies, there’s a growing trend that’s disrupting the entertainment delivery market: more and more people are hooking up over-the-air TV antennas for picking up free live broadcasts in high definition.

Luckily, today’s HDTV antennas are a far cry from the rabbit ears of yesteryear. The days of constantly fidgeting for perfect reception are gone, and modern antennas are capable of delivering crisp, clear digital signals, complete with 5.1-channel surround sound. While antennas still rely on being near local broadcast towers, digital signals are much easier to receive than the original analog broadcasts, a part of the previous broadcast standards.

The bottom line: if your memories of TV antennas include snowy reception and having to hold specific positions just to get a picture, prepare to be happily surprised. 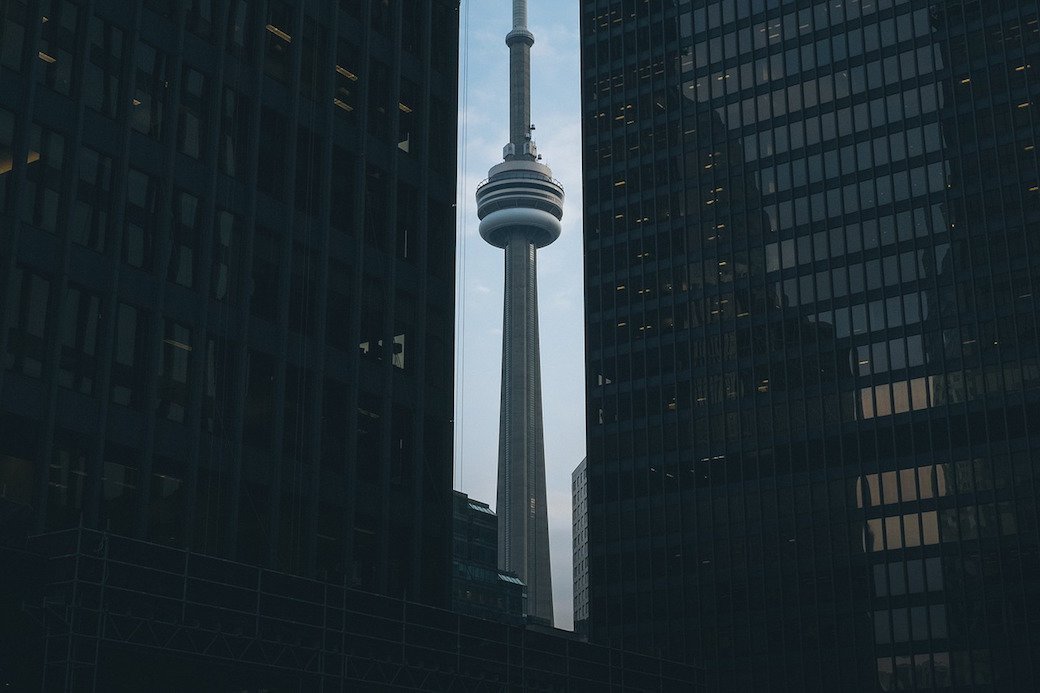 Before you begin shopping for a new HDTV antenna, you’ll need to know two things: how far you are from local broadcast towers, and where you plan to put your antenna in (or outside of) your home.

While the idea of needing an antenna to watch TV may feel like a retro throwback to our shared pre-technological past, over-the-air TV is a significant part of the cultural trend known as cord-cutting.

"A 2016 survey found that 17% of American households use HDTV antennas, instead of subscribing to paid cable TV."
STAFF
BestReviews

Cord-cutting — the act of abandoning your cable TV subscription in favor of streaming TV over the internet and receiving local broadcasts with an HD antenna — is fast becoming a phenomenon. Cord-cutters rely on streaming services to deliver their favorite shows and movies, then supplement those services with local broadcasts to deliver local news and programming from the major networks. The practice is becoming so popular that cable companies often attempt to provide customers with incentives to bundle cable TV with internet service.

But despite the cable industry’s best efforts, cord-cutting is on the rise, and that’s good news for HD antenna shoppers — because the demand means antennas are getting more affordable and more capable each day.

Most HDTV antennas are basically the same, but there are three categories that are useful to understand when shopping:

Did you know?
In the U.S., all over-the-air broadcast programming is free. Most of the major non-cable networks broadcast in full HD, or 1080p.
STAFF
BestReviews

If you live far from broadcast towers, your HDTV antenna may not get a very strong signal. If you get a good, but not great, signal from your antenna — for example, if the picture looks good, but cuts out regularly — you may benefit from an antenna signal amplifier.

"Most television broadcast stations feature one channel while airing additional content on sub-channels. For example, if you receive ABC as channel 2.1, you’ll likely also get channels 2.2 and 2.3 broadcasting reruns, public access programming, or other community-based content."
STAFF
BestReviews

One of the best things about HDTV antennas is that they can be integrated into high-tech setups easily, and many modern solutions exist to help bring broadcast TV into today’s culture of tech. Unlock the potential of your HDTV antenna with these gadgets!

As you’re shopping for your HDTV antenna, consider these tips.

Q. Can I buy a DVR to record broadcasts from my HDTV antenna?
A.
Yes! Several off-the-shelf DVRs are designed to record over-the-air broadcasts. Most antenna DVRs also include additional streaming video features, like Netflix and Hulu. Just be aware that broadcasters can set a “do not record” flag on certain programs, which will disable your ability to record those shows, although this is a fairly uncommon practice.

"The United States updated its broadcast television standards in 2009, requiring all stations to transition from transmitting analog signals to sending digital signals. As a result, over-the-air broadcasts are now available in full high definition (HD) and digital audio."
STAFF
BestReviews

Q. Can I get closed-captioned TV with an HDTV antenna?
A.
Absolutely. Most over-the-air broadcasts include closed-captioning for the hearing impaired. Closed captions can typically be accessed with your TV’s remote. 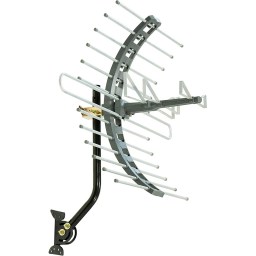 Best of the Best
GE
Outdoor TV Antenna
Bottom Line
This outdoor TV antenna is a reliable way to get your local over the air channels with crystal-clear reception.
Shop Now 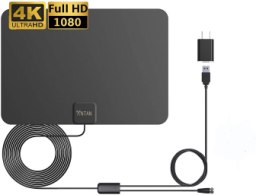 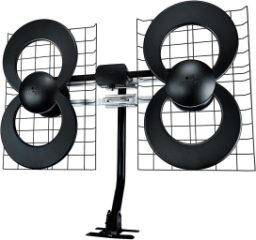 Top Pick
Antennas Direct
ClearStream 4MAX Indoor/Outdoor HDTV Antenna
Bottom Line
This sturdy and powerful HDTV antenna is worth your consideration if you live in a rural area.
Shop Now 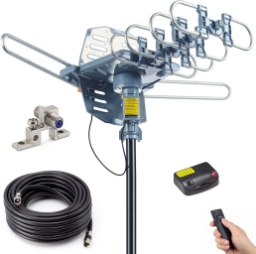 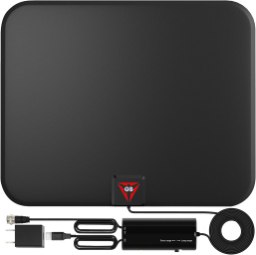 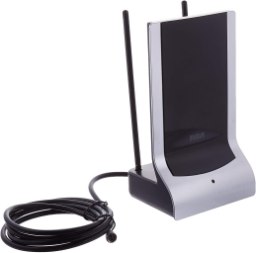 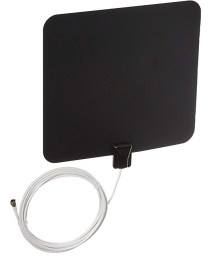 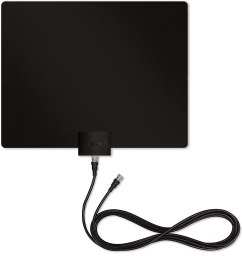 Top Pick
Mohu
Leaf 30 Television Antenna
Bottom Line
While the 40-mile range is not the most impressive, this inexpensive HDTV antenna is the best choice if your home is close to local broadcasters.
Shop Now 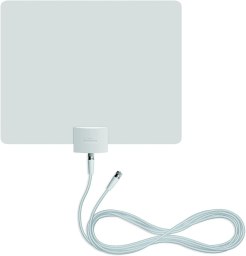 Top Pick
Mohu
Leaf Plus Amplified Indoor TV Antenna
Bottom Line
Its extra-wide range, crystal-clear picture, and ease of use make this HDTV antenna a top pick if you live in a rural area.
Shop Now 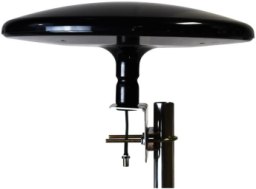