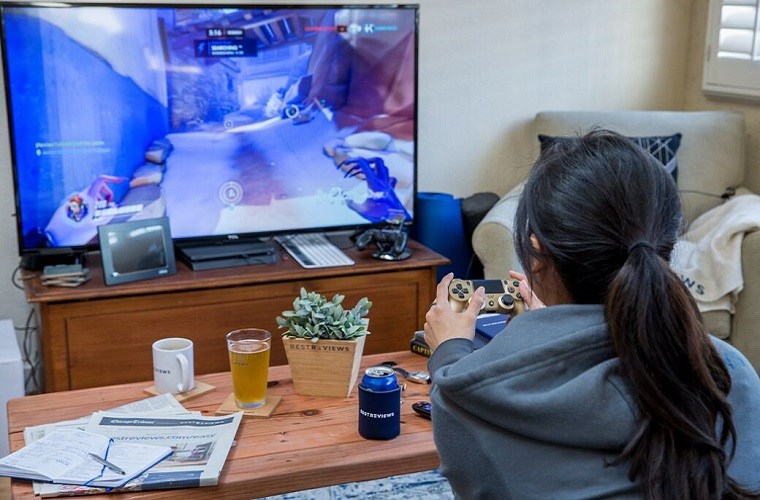 OLED is more than just a buzzword for selling new, expensive TVs. It’s a different type of LED technology from LCD TVs. While it does have a couple of minor drawbacks (namely price), OLED technology outshines LCD panels in nearly every way. If you’re interested in a new high-end TV, now’s a great time to make the shift to OLED.

We sat down with BestReviews’ tech expert Jaime Vazquez to get the inside scoop on why OLED TVs are a great buy right now and how to find the best one for you. As an experienced industry professional, Vazquez argued, “If you’re trying to squeeze every last pixel out of your picture for the ultimate viewing experience, go for an OLED.”

LCDs have been the overwhelming favorites for TVs for years. LCD TVs consist of a backlight, a matrix of what’s called liquid crystal, a set of color filters and some optional screen treatment layers. According to Vazquez, “That means LCDs can get pretty close to perfectly matching the creator’s intended lighting and color, but there's bleed.” This hurts contrast levels and makes blacks look somewhat gray.

“With OLED,” Vazquez continued, “you’re getting an exact representation of every pixel.” Since there’s no liquid crystal matrix for the light to overcome, OLED TVs produce perfect black levels and zero light bleed. “Where a traditional LCD TV would approximate black with a dark gray, OLEDs simply turn that pixel off. There's no light coming from it at all,” Vazquez explained.

This gives OLED TVs a massive advantage over LCDs in terms of contrast, especially with high dynamic range content. They’re also more likely to stick to the creator’s original vision for their content.

Why you should buy an OLED TV

Increased competition and manufacturing efficiency have led to many new OLED TVs in an ever-widening price range. It’s now possible to get your hands on a high-performing OLED TV without breaking the bank. One way to do that is to look beyond the absolute newest releases.

For example, the LG C1 was released in 2021 and has since been replaced by the LG C2. While the C2 does offer some improvements, last year’s model still performs well. In reality, you’d need to look at them side by side to notice any actual differences. Despite their similar performance, the C1 costs less by a significant margin.

To be clear, there’s exactly one company in the world that produces OLED panels in TV sizes. That’s LG Display, a subsidiary of the well-known LG Corporation. The LG Electronics arm of the multinational tech giant engineers and manufactures the TVs themselves.

This is an important point to remember because it means most OLEDs perform somewhat similarly. There are more and less expensive brands and models, but they all have the same advantages over LCD TVs.

LCD TVs traditionally come out on top in the brightness category. For the last few years, LCD models have reigned as the top choices for a true HDR experience or for viewing in bright rooms.

That’s changed in the last couple of generations. The latest crop of OLED TVs boasts brighter pixels than in the past. The LG C2 and its new Evo-class panels, in addition to Sony’s high-end models, are surprisingly bright for self-illuminating displays.

The stereo speakers in most budget-friendly TVs sound poor. It’s not easy to find an LCD TV for $600 or so that sounds decent. Things change once you get out of that entry-level range, though. “The sound on OLED TV panels is always significantly better than your average LCD. When you cross that threshold of $1,500 or so, suddenly the speakers don't sound terrible,” Vazquez said.

Vazquez explained it pretty clearly: “Vizio is proudly a budget brand, so their job is to cut corners. They’re good entry-level options.” In other words, look for a Vizio if you want the basic pros of OLED technology but don’t want to spend a fortune.

Picking the best Vizio OLED is a slam dunk because there’s only one. The 55-inch Vizio OLED H1 from 2020 costs less than most others and looks great compared to most LCD TVs. There’s also a 65-inch version that’s almost identical, but it’s harder to find.

“LG OLEDs have been around the longest, and they’re still among the best,” Vazquez said. LG offers four main OLED TV lineups: the A, B, C and G series. The LG A1 is close to the Vizio in price but lacks some key features. LG’s B2 includes many of those features but isn’t as cost-effective as the older C1.

The LG C2, its newest and most popular model, represents the best balance of price and performance for most people. The G2 offers more brightness but may not be worth the increased cost.

Even though LG usually offers the best value proposition, many experts prefer the performance of a Sony. Vazquez, for example, asserted, “Sony’s TVs have always been fantastic. When I was ready for my new TV, I agonized over LG or Sony.”

Part of Vazquez’s decision to opt for a Sony TV is the company’s attention to small but meaningful details. Vazquez explained how Sony commits to well-balanced black-to-white contrast. This makes features such as subtitles more comfortable to use.

Added to that attention to detail is the sheer high performance of some Sony models. Where most OLEDs fall short in the brightness department, the Sony A90J holds its own with many LCD TVs. If you’re willing to pay the high price that Sony products usually demand, the premium A90J is a great long-term investment.

Samsung has made great TVs for years, but it’s the newcomer to OLED models. Its S95B series is the first to combine quantum dot filtration and OLED technology. However, it costs a pretty penny and doesn’t have a significantly expanded color gamut compared to the LG or Sony offerings.

Q. What are the drawbacks to OLEDs?

A. The biggest one is their high price, which makes buying one a tough decision for many people. The other recurring downside is questionable brightness levels on all but the most expensive OLED TVs. Advancing technology helps to mitigate both of these issues.

Q. What is OLED burn-in?

A. The backlight, liquid crystal matrix, color filters and additional layers on LCD TVs don’t degrade over time or suffer from long-term image retention. OLED pixels, however, can lose brightness slowly in the long term. This happens when one pixel works harder for longer periods than the pixels around it. The result is a shadowed or outlined image that shows up where static content is displayed for a long time.

For example, if you watch a lot of sports, there’s potential that the scoreboard or heads-up display could leave a long-term mark. However, advanced panel manufacturing and a few novel technologies go a long way toward eliminating this problem. The average user won’t have any issues.

Q. Is QLED as good as OLED?

A. Despite the similar name, they’re different technologies. While OLED is a fundamental type of LED technology, QLED, or quantum dot filtration, is an advanced type of color filter. Microscopic particles called quantum dots, placed in a film and sandwiched between other layers in a TV, absorb lighting and re-emit it at specific wavelengths. This widens the color gamut coverage of a TV and makes HDR content particularly more attractive.

So far, Samsung’s S95B is the only TV to combine both QLED and OLED technologies.