One foot tall Wonder Woman action figurine. This Justice League model features golden lasso and the pose can be changed. Lasso hooks into belt loop or hand depending on the type you buy. Excellent reviews from buyers. A great classic collectible toy.

Some quality concerns. Item is a bit expensive. 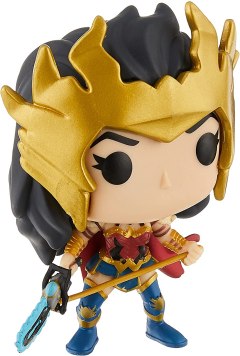 Pop! Figurines are highly collectible and this figure is a great addition to a collection.

Keep in the original packaging that features a clear front or show it off outside the package. Stands roughly 3 inches tall and fits great on desks or shelves. Part of the Justice League series.

Figure may not stay up well on its own and would need a stand. 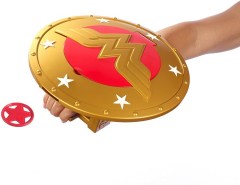 The projectile feature makes this a great accessory for imaginative kids.

Plastic shield is sturdy. Launches plastic discs up to 22 feet. Includes 5 discs. Excellent accessory for pretending to be the Amazon warrior.

May not be suitable for young children to use. 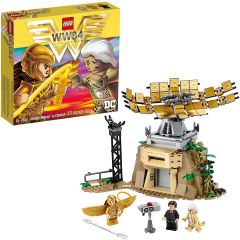 A 371 piece Lego set featuring transmitter tower and bunker. Includes Max, Wonder Woman, and Cheetah figures. Tower turns all the way around. Fun to put together. Lego scene is a perfect replica of the 1984 movie.

Some buyers complained of missing items with this product. 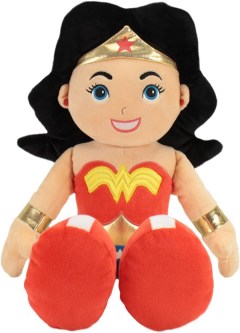 Soft and snuggly, this product is great for small children or as a collectible.

Made from a polyester blend that’s super soft, this is great to tuck kids into bed with. The medium size makes them great to play with as well.

Seams may tear over time and heavy play.

Wonder Woman burst onto the comic book scene in 1941, an Amazonian princess with Greek gods as parents and an array of powerful skills and weapons at her disposal. She became an icon for young girls and boys everywhere and a fan favorite of adult comic book enthusiasts as well. Among her many pursuits was forming the famed Justice League of America with Batman, Superman, and other superheroes.

Wonder Woman, also known as Princess Diana of Themyscira and Diana Prince, gained more popularity in the 1970s with a television show starring Lynda Carter in the lead role. Recently, the Warner Bros. films set in the DC Extended Universe have prominently featured the character, helping to create a new young fan base eager to embrace the superhero.

There are endless toys available for fans of Wonder Woman and her associated world of friends and foes. They’re made for all different ages by popular brands, including collectibles for adults, and feature various designs and interactive elements. 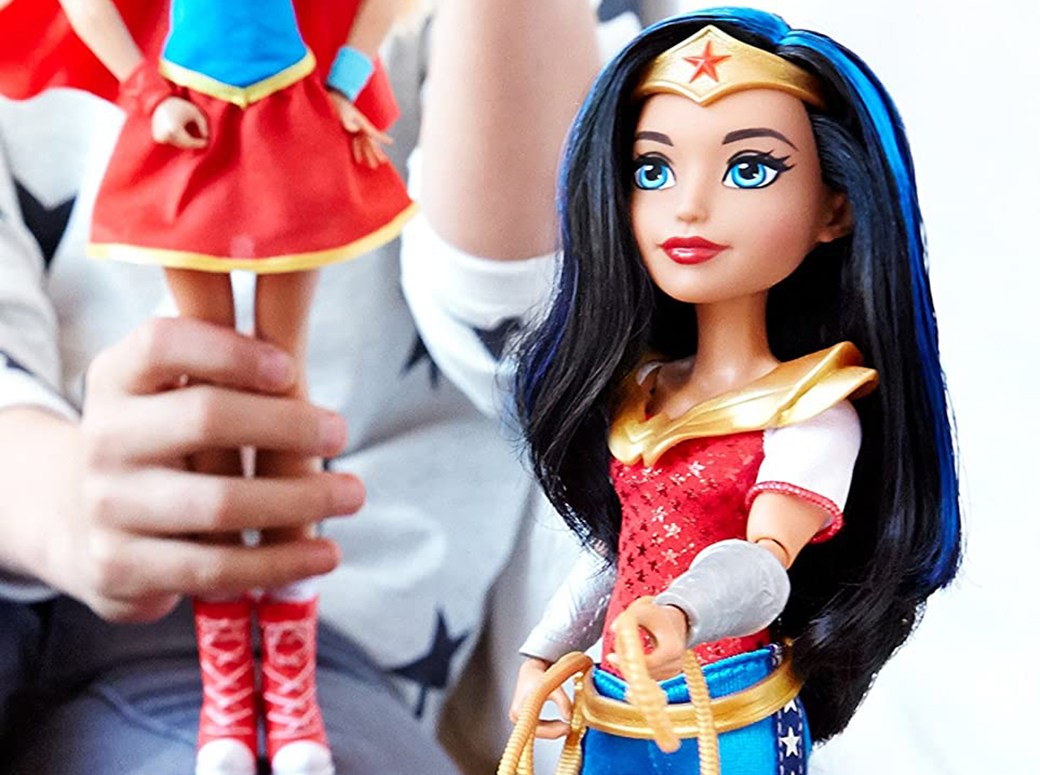 The creation of Wonder Woman is a curious one, credited to William Moulton Marsten, with inspiration from his wife Elizabeth, their life partner Olive Byrne, and the open-minded view they had of the world.

Wonder Woman toys come in a variety of different styles and types.

Action figures: Articulated action figures are among the more popular options because these can be positioned to interact with other toys in creative play. These toys range in size from a few inches to a foot tall. Some very detailed action figures in fixed poses are meant for display.

Wearables: There are also plenty of role-playing toys, including costumes to wear and weapons to wield. Wonder Woman is easily identified by her tiara, lasso, shield, sword, boots, and sometimes a cape. All of these offer youngsters a chance to dress up as Wonder Woman and save the day.

Comics: Like so many other comic book characters, there are a few different versions of Wonder Woman. While there is a fairly standard classic look, depending on the comic book era, the outfit, hair, and even accessories have changed over time.

TV: For years, Lynda Carter was the face of Wonder Woman after her turn in the TV series. She wore the classic outfit that seems a bit more cartoonish today, but it is still iconic and represented in many toys.

Film: More recently, four feature films starred Gal Gadot as Wonder Woman, which means there are plenty of toys available modeled specifically after her portrayal as the heroine, including the famed Amazonian armor.

Animation: There is also an animated TV show called DC Super Hero Girls aimed at younger audiences and featuring Wonder Woman, Poison Ivy, and Batgirl, among others. Some toys for kids are styled after this colorful, precocious version.

The packaging of Wonder Woman toys indicates a preferred age range or minimum age recommendation. Because Wonder Woman has appeared in a variety of forms over the years, there are toys inspired by adult fare and more kid-friendly versions. While it can be argued there is no real age cap for older fans choosing toys, parents should take note of action figures and other toys that include pieces that can present a choking hazard to younger children. 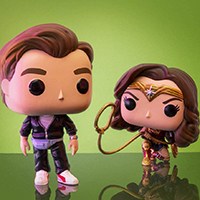 Did You Know?
Woman Wonder fans can find many more products other than toys. You can enjoy décor, bedding, kitchenware, office supplies, and even apparel for adults, children, babies, and pets.
Staff
BestReviews

In addition to more generic toys, a few companies that are known for a specific brand or style of product incorporate Wonder Woman toys in their lineup.

This popular maker of 4-inch stylized vinyl figurines has no shortage of Woman Woman options. There are countless variations of Funko Wonder Woman vinyls with options modeled after various outfits and costumes from the four films and some classic looks. There are vinyls featuring Wonder Woman’s friends and unique vinyls like a holiday-themed Wonder Woman and a pink Breast Cancer Awareness Wonder Woman.

Funko Pop! vinyls are designed for display and typically best for teen and adult fans rather than younger kids looking for something to play with. Some consumers may choose to keep the toy in the original box or get a display cabinet to best showcase the toy.

The beloved Danish toy maker features a series of DC Comics-inspired sets, including some products with Wonder Woman and friends. While this series is dominated by Batman, Wonder Woman does take center stage in several builds, including a newer option featuring a battle with her nemesis Cheetah as inspired by the film. These products include popular minifigs of different versions of Woman Wonder.

Wonder Woman is also part of another LEGO series called DC Super Hero Girls. This line, a spin-off from the Friends series, features mini-dolls of prominent female superheroes and villains from the DC Universe. Mini-dolls are taller and rounder than minifigs, with curved bodies instead of square ones and bigger eyes and facial features. The Friends line started with five young female friends and led to a similarly styled world featuring comic book characters from both Marvel and DC. Lashina, Bumblebee, and Supergirl are among some of the other DC characters featured in this line.

Known for its toys for toddlers and younger kids, this company also produces Wonder Woman toys. Its Imaginext line of toys features comic book character action figures, including DC heroes and villains. These toys are more durable and easier for younger kids to hold. They also omit any easily breakable pieces or extra accessories that could be hazardous to small children.

The maker of the popular Barbie doll offers a selection of Wonder Woman toys for both youngsters and nostalgic adult fans alike. These are modeled in the style of other Barbie dolls, with detailed construction, articulated joints, and voluminous hair. These toys are inspired by the recent films and offer Wonder Woman in a variety of different outfits, as well as other characters including Steve Trevor, Antiope, and Hippolyta.

The LEGO version of Wonder Woman can be seen in a video game and three LEGO films.

For $20 or less, you can find basic action figures as well as some toys for toddlers and Funko vinyls.

Most Wonder Woman toys cost between $20 and $50. In this range, you can find a variety of action figures, LEGO sets, Barbies, plush toys, and coveted Funko vinyls.

The costliest Wonder Woman toys are priced at over $50. These include limited edition or collectors’ editions of toys, particularly Barbie and Funko options. Some rare figurines can cost hundreds of dollars. 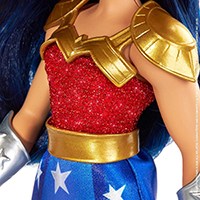 Did You Know?
Wonder Woman has donned a lot of outfits over the years and wielded a variety of weapons. These features offer plenty of possibilities when it comes to finding different toys.
Staff
BestReviews 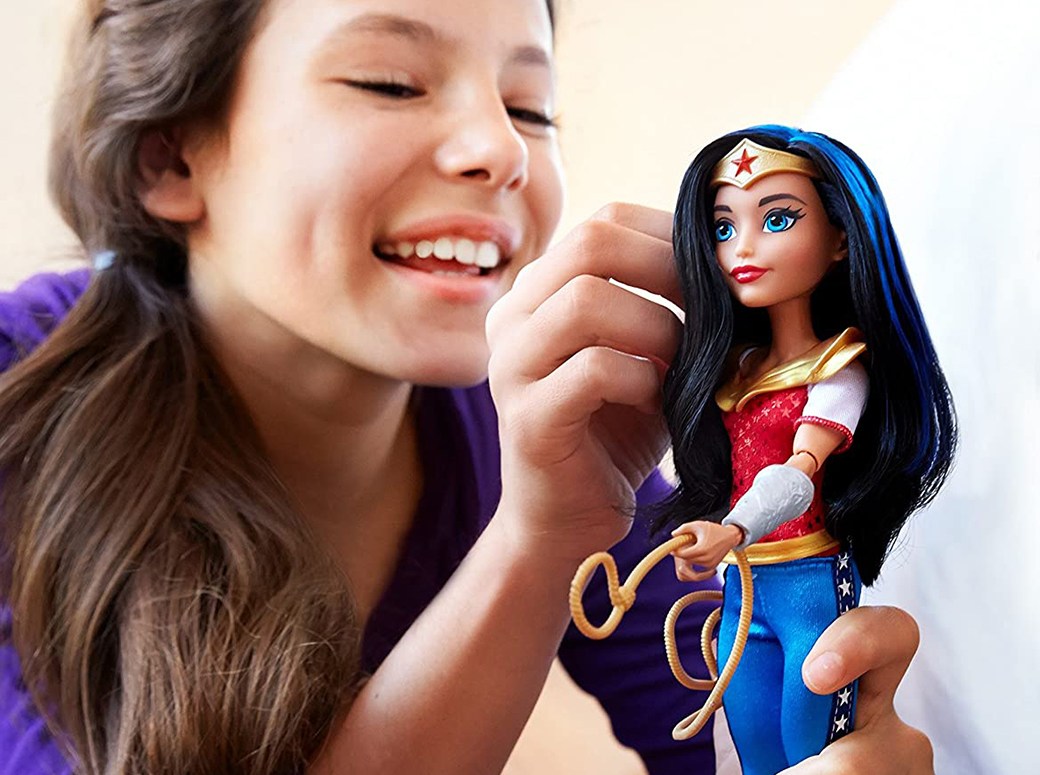 Be sure to break out your Wonder Woman toys on October 21. That is Wonder Woman Day, created to honor her first appearance in DC Comics in 1941.

Q. Is Wonder Woman a good role model for children?

A. Wonder Woman is frequently championed as a positive role model for kids, particularly young girls. She’s often portrayed as smart, powerful, and poised, and she occupies a space that is dominated by men. While there have been numerous female superheroes created since Wonder Woman (and several before) she rose to prominence as a paragon of liberated virtues.

However, there are comic book storylines, as well as those in TV and film, that skew more adult. As there are toys and content geared for both children and older fans, it’s important for parents to find the right balance for their kids.

Q. Are there Wonder Woman toys for adults?

A. Just as there are plenty of options for youngsters, there are also many Wonder Woman toys for adults. These mostly take the form of collectibles that are meant to be displayed. Funko vinyls are popular among older fans, as are detailed action figures. These options are typically showcased around the home or at the office, and while they may have movable parts, they usually aren’t played with. Some Wonder Woman action figures for adults also come with a stand to help show them off.

Q. What’s the difference between DC Comics and Marvel Comics?

A. DC Comics is a massive comic book publisher founded in 1934. Then known as Detective Comics, it grew to feature an extended universe populated by superheroes and villains like Batman, The Joker, Aquaman, General Zod, and Wonder Woman, among many others.

Marvel Comics came to be five years later and went on to showcase heroes like Spider-Man, Iron Man, Captain Marvel, and the X-Men. Characters within each brand appear in each other’s stories and populate the same worlds, but DC and Marvel do not share or combine characters or stories, save for a few heralded instances over the decades when the two groups have collaborated on special limited stories. For those seeking Wonder Woman toys and the characters associated with her, stick with DC. 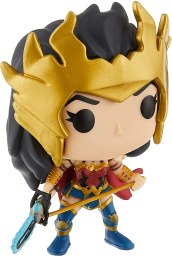 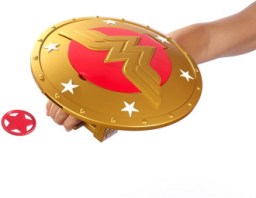 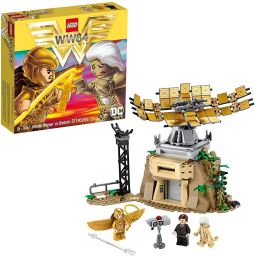 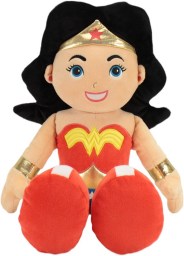 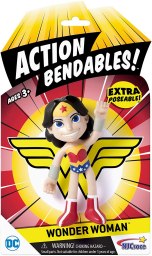