A rugged ride-on that offers quite a bit more than others. The best on the market.

A bit expensive, but well worth the features and quality. 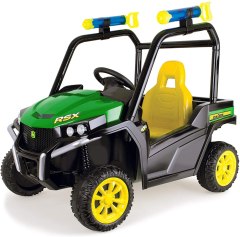 A powerful, durably constructed, single-rider car that your little one will love and enjoy for hours.

Easy for toddlers to operate and understand. Sturdy and stable build. Battery-powered with working lights. Easy to assemble. Battery charger included. Recommended for ages 3 and up.

Does not drive well on grass. Some wished the battery lasted longer. 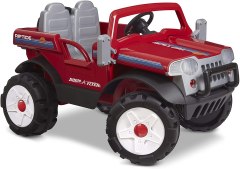 This sturdy and well-built ride-on is filled with gadgets to make your children feel like they’re driving the real deal.

Does not include seatbelts. 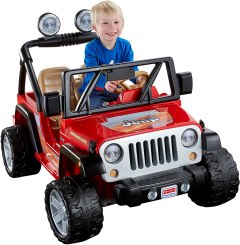 A strong, durable jeep built to ride on different kinds of terrain and will keep your child entertained for hours on end.

Rugged tires that work well on grass and hard surfaces. Can hold up to 130 pounds and seats 2. Includes a play grill and food pieces. Has a parent-controlled lockout.

Assembly is fairly time-consuming and difficult.

What kid doesn’t want to cruise around the yard in her own vehicle? Ride-on cars appeal to children because they control the steering wheel.

When you shop for a kids’ ride-on car, you’ll likely find tractors, quads, and jeeps in all colors and sizes.

These plentiful choices can be overwhelming!

At BestReviews, we offer honest, unbiased reviews that give you the information you need to make wise shopping choices.

Below, you’ll find a shopping guide that examines the kids’ ride-on car market in more detail.

Above, you’ll find a product list that shines the spotlight five of the best ride-on cars we found during our research. 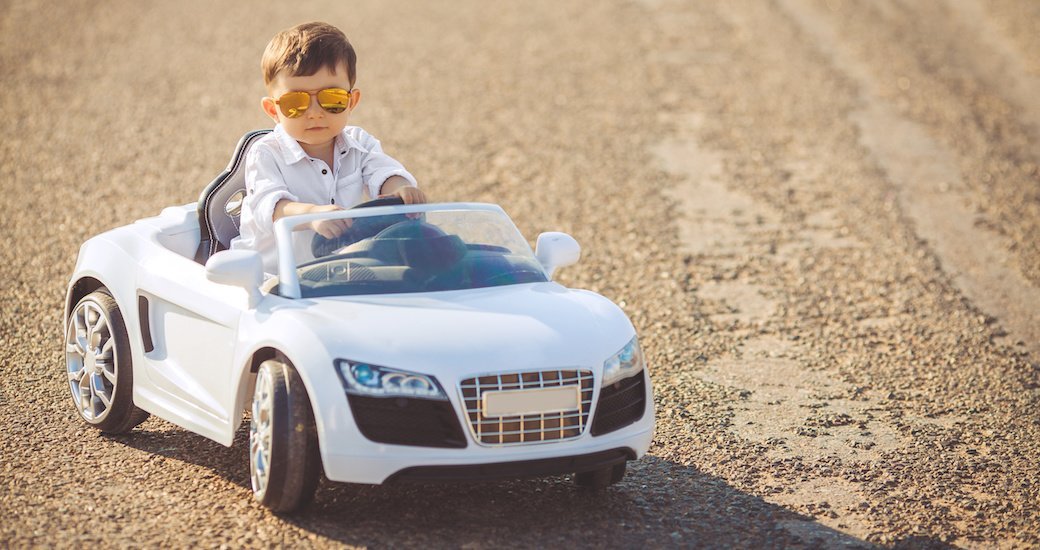 If you’ve got a music lover on your hands, look for a ride-on car that comes with an FM radio. Your child can adjust the station and volume, just like Mom and Dad.

A battery that quickly loses charge can frustrate both parents and children. Some batteries provide up to two hours of ride time on a single charge, while others may last 20 minutes or less. Charging a ride-on car battery could take as long eight to 12 hours, or even longer.

Ride-on cars come with either a six- or 12-volt battery. The more powerful the battery, the faster the car can go. Most ride-on cars don’t perform well on hills, but if you have a yard or driveway with a slight incline, you may want to consider a ride-on car with a 12-volt battery.

Some ride-on cars come with simple steering and very basic controls like “forward” and “reverse.” Others have an accelerator pedal, FM radio controls, and front and/or rear controls. Only you know what your child can handle, but keep in mind that he might get frustrated if the car is too difficult to operate.

Did you know?
Worried about safety? Some ride-on cars allow children to steer but also let parents take over with a remote control. With a remote, you can help your little driver avoid accidents and obstacles.
STAFF
BestReviews

A ride-on car’s size dictates who can use it and where. Large ride-on cars will only work in a yard or driveway. Young toddlers may have a hard time reaching the pedals of a larger ride-on car. Some smaller models, (usually quads), can be ridden in the house.

Before purchasing, check the height recommendations for the vehicle to be sure your child is tall enough to use it.

Two-seat ride-on cars that hold 77 pounds could feasibly hold two younger riders. There are even some ride-ons that can hold up to 130 pounds, allowing much older children to play.

Your child will get more use out of a ride-on car with a higher weight limit. However, those with lower weight limits may fit smaller children better.

Quads, with their four-wheel design and handlebar steering, are easy for many toddlers to operate. Those built for younger children often have a push-button start and stop that’s easy to use. There are quads built for the littlest of little riders all the way up to larger models that can accommodate two kids and pull a trailer.

A kids’ ride-on motorcycle mimics the look and feel of a full motorcycle but run at a speed of two to three miles per hour. Kids’ motorcycles are easy to steer, but a child must be able to balance on it to stay upright.

Popular car and truck ride-ons are often made in the image of the full-size cars you see on the street. You might see a neighborhood kid tooling around in a child-size Mini Cooper, Humvee, Shelby Cobra, or Jeep. These ride-on cars have varying battery power and size.

Ride-on tractors, fire trucks, and trains may not be as popular as quads, cars, and trucks, but they can be just as much fun. Many tractors have a bucket on the front for digging and excavating, while others can pull a trailer. Fire trucks may have a siren and working lights. 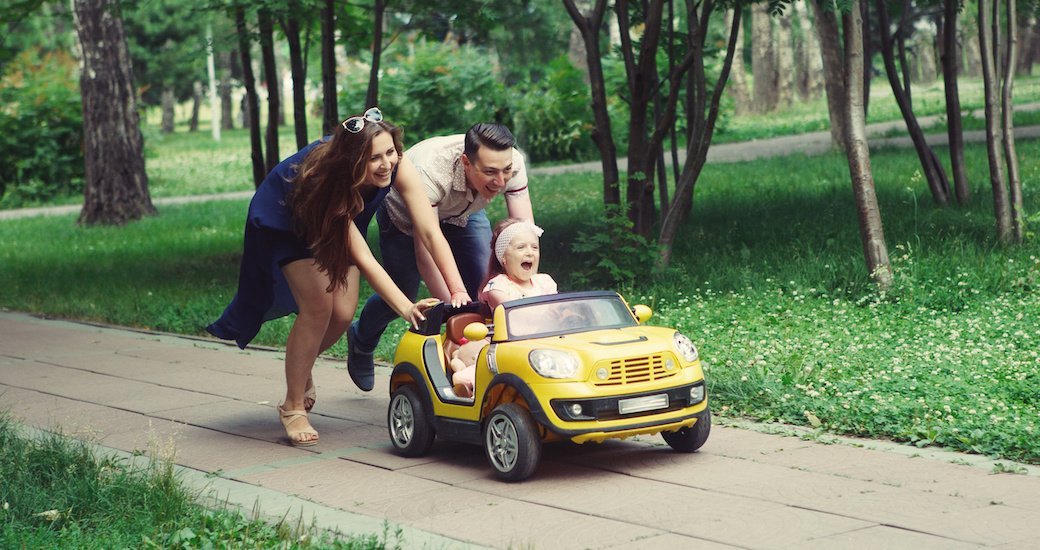 Fun extra features you might want to look for when shopping for a ride-on car are working headlights, a car horn, a siren, and foldable mirrors.

Q. How much power do I need in a kids’ ride-on car?

The younger the child, the fewer volts you need. Five miles per hour may not sound very fast, but when you have a five-year-old at the wheel, you probably don’t want to give her much more speed than that.

Q. Can all ride-on cars move in forward and reverse?

A. No. Some ride-on cars have reverse, but others don’t. Cars intended for younger children often have one speed and direction: slow and forward. More sophisticated ride-on cars may have forward and reverse functions in more than one speed.

Q. Can ride-on cars be driven on hills, dirt, and mud?

A. To determine this, check the design of the toy – particularly the wheels. Plastic wheels without a tread pattern don’t do well on slopes or slippery terrain. You’ll probably need at least a 12-volt battery if you have a sloped yard or driveway.

Best of the Best
Peg Perego
John Deere Ground Force Tractor With Trailer
Bottom Line
A rugged ride-on that offers quite a bit more than others. The best on the market.
Shop Now 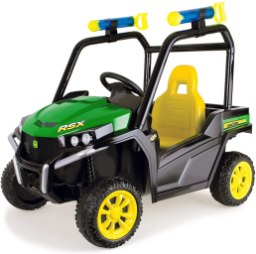 Best Bang for the Buck
John Deere
Gator Ride On Toy Car
Bottom Line
A powerful, durably constructed, single-rider car that your little one will love and enjoy for hours.
Shop Now 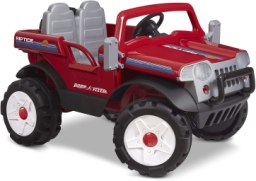 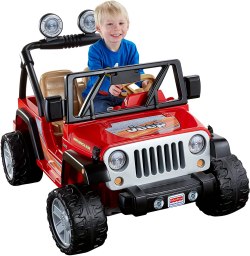 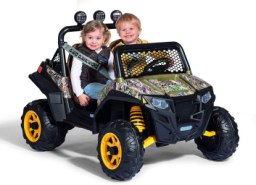 Top Pick
Peg Perego
Polaris CAMO Ride On
Bottom Line
This dual-seated jeep will unlock your child’s sense of adventure and allow them and a friend to safely explore many different landscapes.
Shop Now