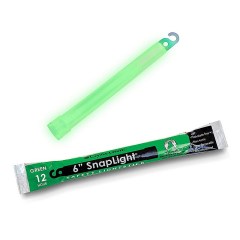 This high-quality option not only lasts for all-night parties, but also works as commercial-grade safety tools.

These will last for 12 hours and have a 5-year shelf life. Waterproof, nontoxic, and non-flammable for supreme safety. Work well for outdoor activities. Made in the U.S.

Dimmer than some customers were expecting. Product is inconsistent. 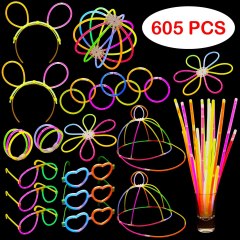 605 pieces that can easily be shaped into accessories and will be a hit at your next party.

Comes with a large variety of shapes and colors. Can be made into hats, balls, jewelry, flowers, heart-shaped glasses, and more. Easy to make into new shapes. Light lasts for hours.

A few buyers said they wished there were more connectors. 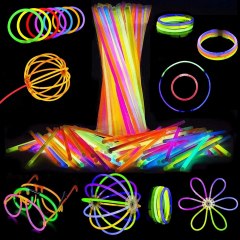 A bundle of 400 that will provide everyone with hours of fun and entertainment.

Built to radiate for 12 hours. Can be morphed into glasses, bracelets, balls, shapes, and flowers. Strong connectors. Reviewers said they were loved by kids and adults alike.

Not as bright as other brands. 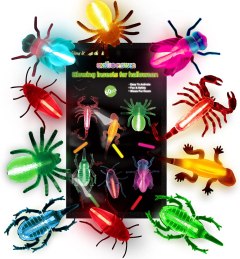 This combo pack will add a fun and spooky aspect to your party.

A large bundle of plastic bugs and regular rods; 60 pieces total. Comes in 6 different colors. Built to last for 4 to 6 hours. Can be made into necklaces.

Rods have to be inserted into the bugs. Some said they did not shine very brightly through the bug shapes. 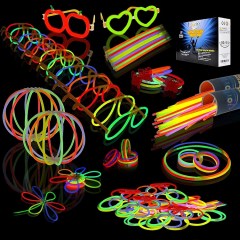 Comes in a pack of 200. Connectors allow you to create eyeglasses, flowers, balls, bracelets, and butterfly shapes. Light lasts for 10 to 14 hours. Nontoxic with a waterproof construction.

Many arrived defective. Connectors could be higher-quality.

Even if you’re attending an all-day event, the real party starts when the lights go off. Whether you’re experiencing the dark ambiance of a nightclub or the veil of night on your patio, the mood and atmosphere change as soon as it’s dark. If you want to light your space up without detracting from the nocturnal vibes, consider some glow sticks.

Glow sticks light up and stay illuminated for 6 to 12 hours, so they’re great for evening events. While they’re generally associated with the party scene, glow sticks are also embraced by the military as well as campers and hikers. The long-lasting light of glow sticks helps illuminate paths and provides illumination without the need to build a fire. In fact, if you find yourself without power or needing to change a tire at night, a glow stick is a battery-free/hands-free solution to temporary lighting. 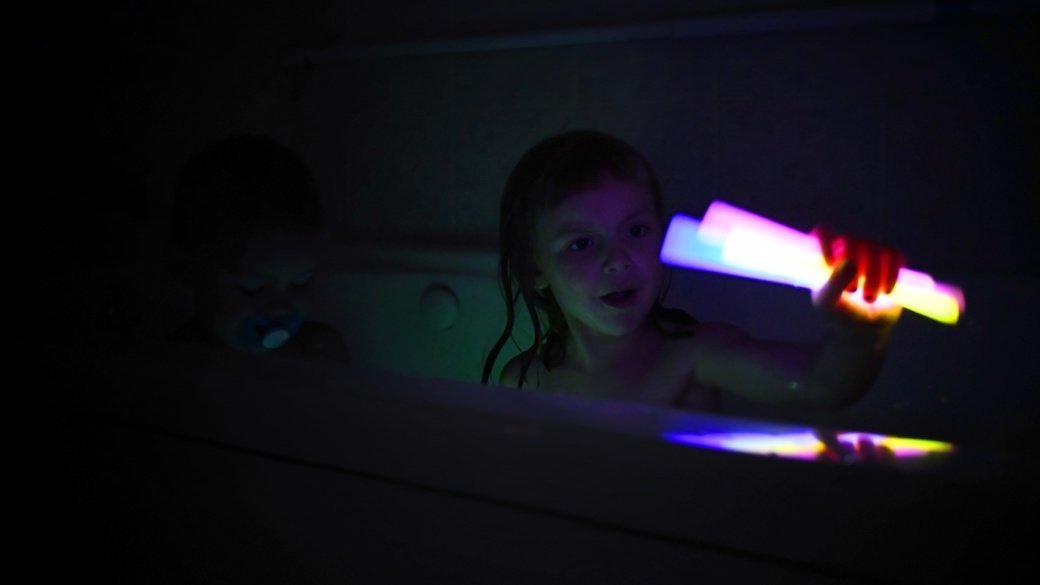 If your child is afraid of the dark and has difficulty falling asleep in a dark room, use a glow stick at night to help with bedtime. The glow will gradually decrease and provide a little bit of comfort. You can keep the glow stick in a pillowcase to muffle the glow.

How do glow sticks work?

When it comes to glow sticks, it’s a matter of snap, crackle, and glow. To activate them, simply remove them from their packaging and bend them. There’s no need to fold them completely in half — you’ll find it only takes a small amount of bend to get them going. You’ll see the liquid within light up, and you can continue to gently bend and shake them to fill up the tubes.

How long do glow sticks last?

The endurance of a glow stick can be measured in two ways: glow time and shelf life. Glow sticks stay lit up for six to 12 hours at a time. They gradually fade over that period, though they retain their full brightness for about 30% of their full glow time.

As far as shelf life goes, inexpensive glow sticks (like the ones in party sets) last up to one or two years. Other glow sticks, particularly six-inch styles that are used for outdoor activities like camping or fishing, have a shelf life of up to five years. For the products to say true to their advertised shelf life, it’s recommended that you store your glow sticks in a cool or climate-controlled area.

Glow sticks are made of plastic tubes that encapsulate the liquid, which is sometimes contained in a smaller glass vial. The plastic and glass are generally the same for all glow sticks, though the formula of the liquid tends to differ. It’s usually a mixture of fluorescent dyes, hydrogen peroxide, and tert-butyl alcohol that, when mixed, produces a luminescence. Some glow sticks utilize phthalates; others avoid them to achieve a safer, non-toxic formula.

Glow sticks come in over a dozen colors, although the most popular colors remain green, yellow, and blue. The least common color is white. Some glow sticks, usually necklaces or other wearable styles, may have a color gradient.

Glow stick sets cost between $10 and $60; there’s a set available for every budget.

The least expensive sets, between $10 and $25, include sets of between 10 and 20 six-inch glow sticks. There are also some larger packs of necklace glow sticks that may include anywhere from 100 to 250 sticks.

In this range, sets cost between $25 and $45 and include larger counts. Some sets have LED accessories such as rings, wands, and swords.

At the high end of the range, between $45 and $60, are the mega-sets of glow sticks. Not only do these usually contain upward of 1,000 pieces, but they also tend to include the largest variety of solid and gradient colors. 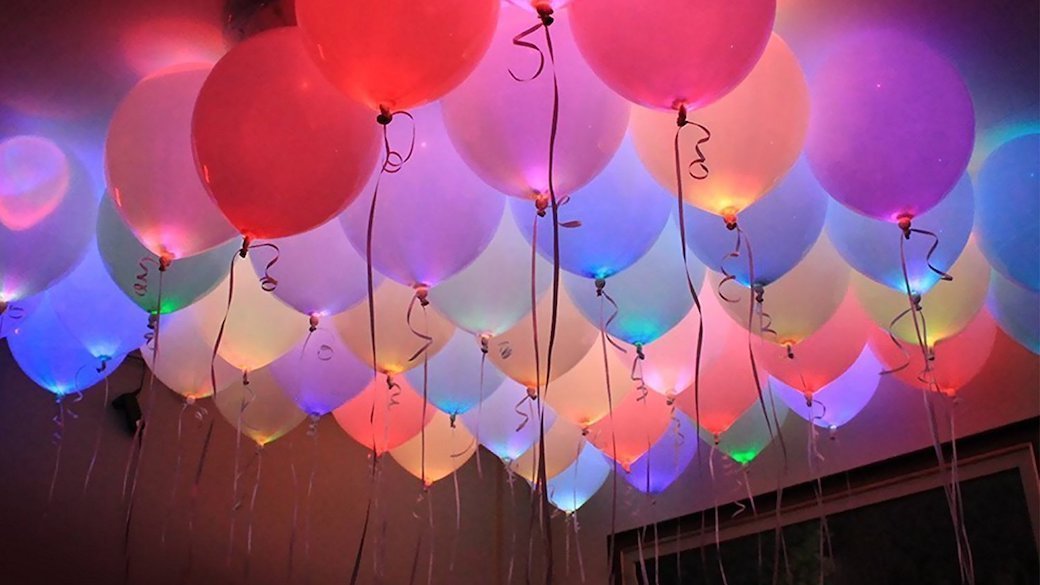 Put glow sticks inside a balloon. Inflate a couple dozen for an all-around glow. It’s a fun, lightweight, and affordable party decoration.

Q. Will I be able to see the glow sticks light up in daylight or indoors?

A. For the most part, no. At the very most, you’ll be able to see a faint glow that is barely noticeable. Glow sticks are designed to be used in dark environments, such as outside at night or inside dance clubs and other darkened rooms. Your best bet is to save your glow sticks for the right place where you can appreciate their colors and light.

Q. What is the purpose of keeping glow sticks in my car? I noticed some auto emergency kits include them, and I’m wondering if I should get some.

A. Glow sticks emit light for prolonged periods of time, and they cast a fairly decent area of glow, so they can be helpful in the event that you have car trouble or need to change a tire at night. Since they are completely hands-free light sources, you can work unencumbered, without having to hold a flashlight or your phone. You can save your phone’s battery and possibly use it to bring up a tutorial car repair video instead.

Q. Is it okay to get my glow sticks wet?

A. Yes. They’re covered with flexible plastic, so you can bring them into the pool with you. Some people drop them in mason jars filled with water for a lantern effect. Keep in mind this only applies to glow sticks; some LED rings and accessories that come with glow stick kits could have their electronic parts corrupted if they come into contact with water, so be sure to read all instructions and warnings. 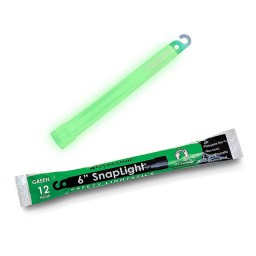 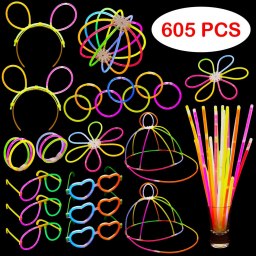 Best Bang for the Buck
Dragon Too
Glow in the Dark Party Supplies
Bottom Line
605 pieces that can easily be shaped into accessories and will be a hit at your next party.
Shop Now 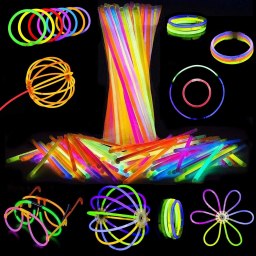 Top Pick
Attikee
840 PCS Glow Sticks Bulk
Bottom Line
A bundle of 400 that will provide everyone with hours of fun and entertainment.
Shop Now 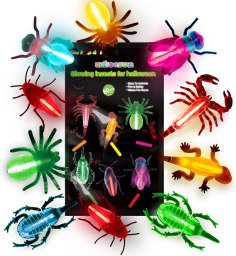 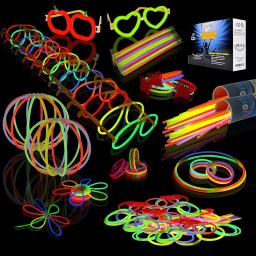