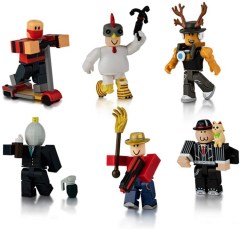 Choose this set for avid enthusiasts of the game or youngsters who want to add some favorite characters to their collection.

Set of 6 characters with lots of interchangeable accessories. Popular among collectors who are into the online game, as they represent some of the most well-loved characters.

This set of 5 wild-west-themed figurines is a great way to fuel your child’s imagination and love for adventure.

Bendable and posable joints. Characters can sit on the horse, and they come with small accessories. Includes redeemable code for a virtual item. Durable and built to be played with. Well-made. Able to mix and match sets.

Accessories are small and easy to lose. 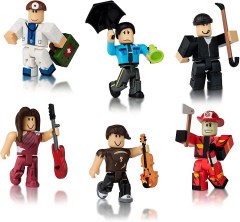 A large set with accessories and 6 fun characters that will give youngsters a hands-on way to create imaginative play.

An impressive set that comes with 6 characters, including "RoCitizens" and others from the brand's popular games. Has lots of mix-and-match pieces. Perfect replicas to the games' characters.

A few concerns about authenticity, as some sets arrived with individually wrapped pieces. Some small accessories can break easily. 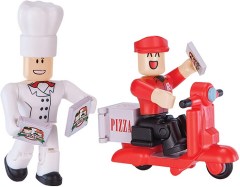 If you're looking for a set with an everyday theme that will appeal to most youngsters, this is a practical choice.

A few components seem flimsy. At least one customer received the wrong set.

Four-figure pack of super-powered figurines that lets your kid choose if they’re the hero or the villain.

Vibrant-colored characters. Characters come with unique and personalized accessories. Elemental-themed. Reviewers said it was a big hit with their children. Includes a redeemable code for a virtual item.

A few rare reports of the items coming in a damaged box.

Who knew boxy characters could be charming and whimsical? Roblox toys hail from the largest user-created virtual universe and feature fun characters, ranging from rock stars to fairies.

These cute collectibles are easy to adore, especially by kids who already enjoy the online video game. The figurines encourage open-ended play, and when kids are ready to go digital, they can plug in a redeemable code to unlock and exclusive Roblox item. As you can imagine, the appeal of Roblox comes from their ability to be played with physically or online — both ways are equally engaging.

If you’re new to Roblox, we’ve got the rundown with all the details you need to understand this line of toys and playsets. Keep reading to discover the different sets on the market so you can choose the right one for your kid. 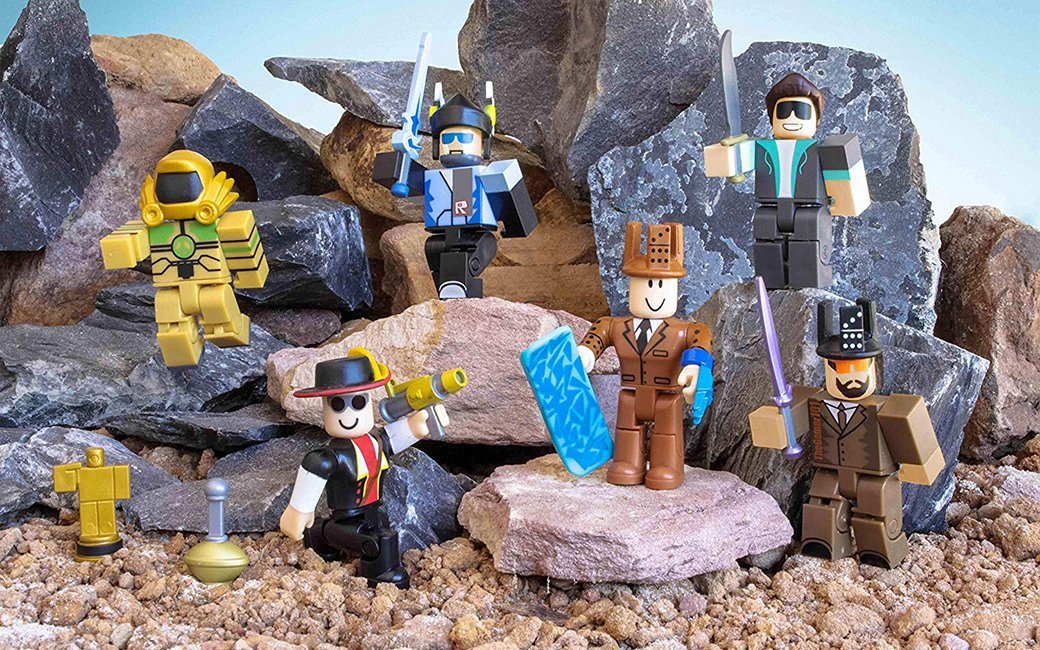 Some Roblox toys come with up to 10,000 points for use in the online Roblox universe. The packaging may advertise the value of the redeemable code, or what item it unlocks, but this is not always the case.

Roblox toys are the physical counterparts to popular characters in the Roblox platform, which can be played on PCs, Apple computers, smartphones, and Xbox One. The platform itself is a collection of user-generated video games set in a variety of worlds and featuring a huge cast of characters. Each character has a name and distinct personality, shown by their facial expressions and costumes. With that said, Roblox toys have articulating parts and interchangeable pieces for kids to create their own characters with new stories.

Before you buy, try to learn what characters, games, and worlds in Roblox are your child’s favorites.

Because Roblox toys typically come with small parts and accessories, they’re recommended for ages six and above. In addition to safety considerations, Roblox toys are best enjoyed by kids over age six. Not only will they be better able to enjoy the figurines, but they can also join and interact with the online game.

Some Roblox toys come with scratch-off cards with redeemable codes, which are used in the Roblox online game. These provide players with credits to purchase in-game items or unlock access to a specific virtual item. If you’re buying a Roblox toy for the first time, make sure the card isn’t thrown out with the packaging, as the manufacturer doesn’t provide replacement codes.

Did you know?
Many parents create their own Roblox avatar to understand the online gameplay or to join in the fun with their kids.
STAFF
BestReviews

Sets with just one or two characters typically come with a couple of signature accessories. The more sets you amass, the more interchangeability you can enjoy. Some kids like collecting the single-character boxes for display, as opposed to playing with them.

Famous character sets include four or six Roblox characters with their accessories. They usually come from the same world, city, or game. Some sets come with more accessories than others, in which case they’re a bit more expensive.

If your kid prefers a bit of a surprise when it comes to collecting Roblox toys, consider buying a Mystery Pack set. Typically available in sets of six, these Roblox figurines come with cubes that must be opened to reveal the character. Each figurine comes with a redeemable code for a virtual item.

The largest Roblox toys are playsets. These include at least two or three Roblox figurines, as well as a themed structure, which usually doubles as a storage case. Roblox playsets also come with a larger assortment of accessories for each character.

Roblox toys are priced according to their set sizes. Smaller sets with 1 or 2 characters cost less than $15, whereas 6-figurine sets can run closer to $30. Playsets which feature a variety of accessories and buildings have a broad price range, starting at $20 and reaching $50. 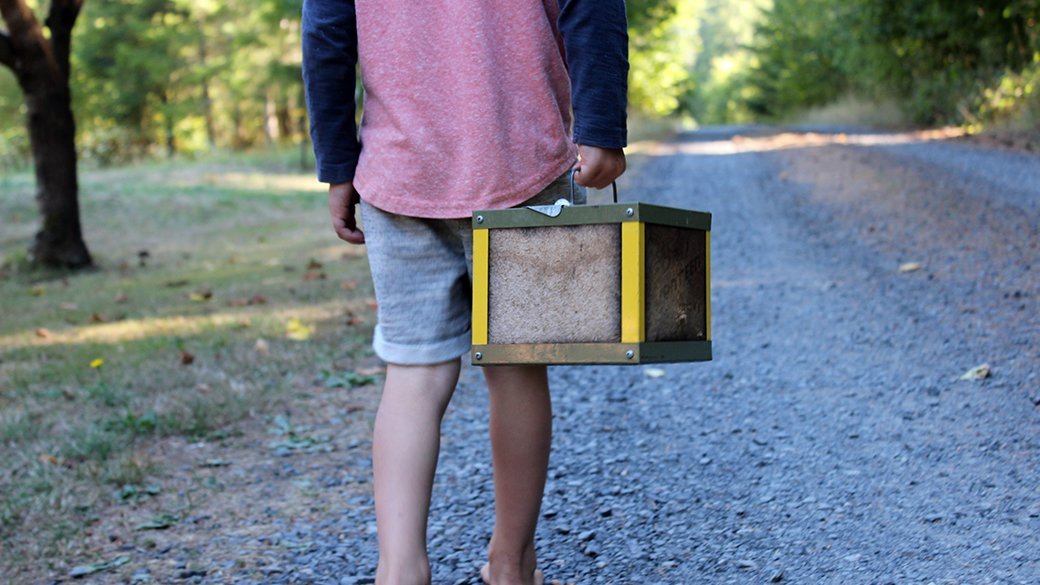 A large collection of Roblox toys means your kid has quite a few tiny pieces and accessories. Keep them organized in a tackle box for easy organization and visibility.

Q. Are Roblox toys compatible with any other toy sets?
A.
Appearance is really where the similarities end between Roblox toys and LEGO or Playmobil toys. Generally speaking, Roblox has self-contained characters and narratives, but their parts can be interchanged with other Roblox figurines and playsets.

Q. How big are Roblox toys?
A. Roblox figurines are approximately 3 inches tall without any hats or attachments like wings or tails. Other Roblox accessories can be significantly larger, such as vehicles that can hold several Roblox figurines. 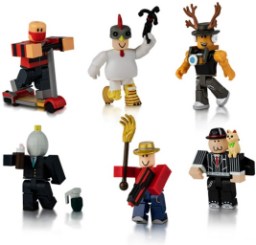 Best of the Best
Roblox
Masters of Roblox 6-Figure Pack
Bottom Line
Choose this set for avid enthusiasts of the game or youngsters who want to add some favorite characters to their collection.
Shop Now

Best Bang for the Buck
Roblox
The Wild West
Bottom Line
This set of 5 wild-west-themed figurines is a great way to fuel your child’s imagination and love for adventure.
Shop Now 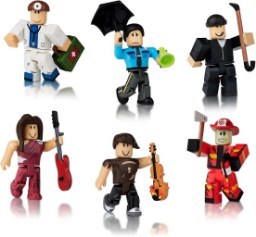 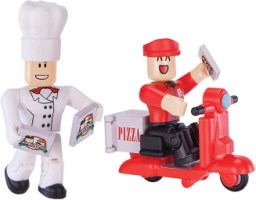 Top Pick
Roblox
Work at a Pizza Place Game Pack
Bottom Line
If you're looking for a set with an everyday theme that will appeal to most youngsters, this is a practical choice.
Shop Now