Whether you're new to table tennis or have pro-level skills, this set has everything you need for your game – well-made components and plenty of rackets and balls.

Rare incidences of the blade backing coming unglued. Some owners noted a strange odor upon arrival that tends to fade over time. 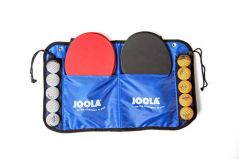 Most players who are looking for a complete set for the game will find this JOOLA, a trusted brand in table tennis, to be both affordable and practical for their needs.

Packed with accessories needed for the game, this is a family-friendly JOOLA set that comes with 4 paddles, 10 balls, and a handy carrying case with compartments to keep everything organized.

The build of the rackets feels less durable than some competitors, making them more suited to beginners and hobbyists than serious players. 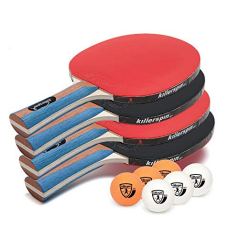 Aside from a few quirks, this is a quality table tennis set made by a reliable name in the industry.

Generates enthusiasm from players who love the sturdy build of the paddles and the spin they are able to achieve. Surfaces also provide good traction. Set includes 4 paddles and 6 balls.

The rubber coating around the paddle edges has the tendency to peel off with typical use. The texture of the handles is somewhat rough. A few owners thought the balls could be more responsive. 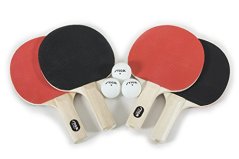 Though there are a few minor concerns about the handles and balls, you'd have a hard time finding a lower-priced set with better paddle design or performance.

In addition to the rugged 5-ply blade design, these 4 paddles have well-made nips-out backings that deliver superior performance and don't seem prone to peeling like some costlier competitors.

Though the handles feel smooth, they have been known to develop occasional mild splintering. The set comes with 3 balls, but they are on the flimsy side. 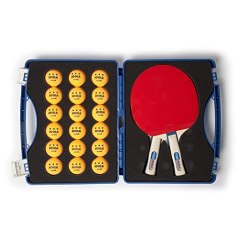 Not the best choice for more than 2 players; otherwise it's a decent JOOLA set with a case that's even more impressive than the paddles and balls.

Stands out for the impressive case that has a thick foam insert that provides extra protection for balls and paddles. Comes with 2 nicely constructed paddles and 18 well-made, responsive balls.

A few players gripe about the lack of spin produced by the paddles. Some quality control issues have been reported – missing paddles, broken balls upon arrival.

Rugby, skydiving, surfing. They’re all fun sports, but they’re also sports that can be difficult to participate in, much less excel at. Table tennis is just the opposite. In table tennis (aka Ping-Pong), you don’t need a lot of skill, stamina, an airplane, or an ocean to enjoy.

Table tennis is one of those sports that anyone can play, making it perfect for adults and kids of all ages. If you have the table, all you need are a couple of paddles, a few balls, and a case to carry them in. You can buy all these elements individually or save a bit of money and time by picking up a table tennis set.

This guide walks you through everything you need to know to buy the right table tennis set for your home. In addition to examining the paddles, balls, and carrying cases, we also cover everything from paddle performance and skill level to quality and price levels. 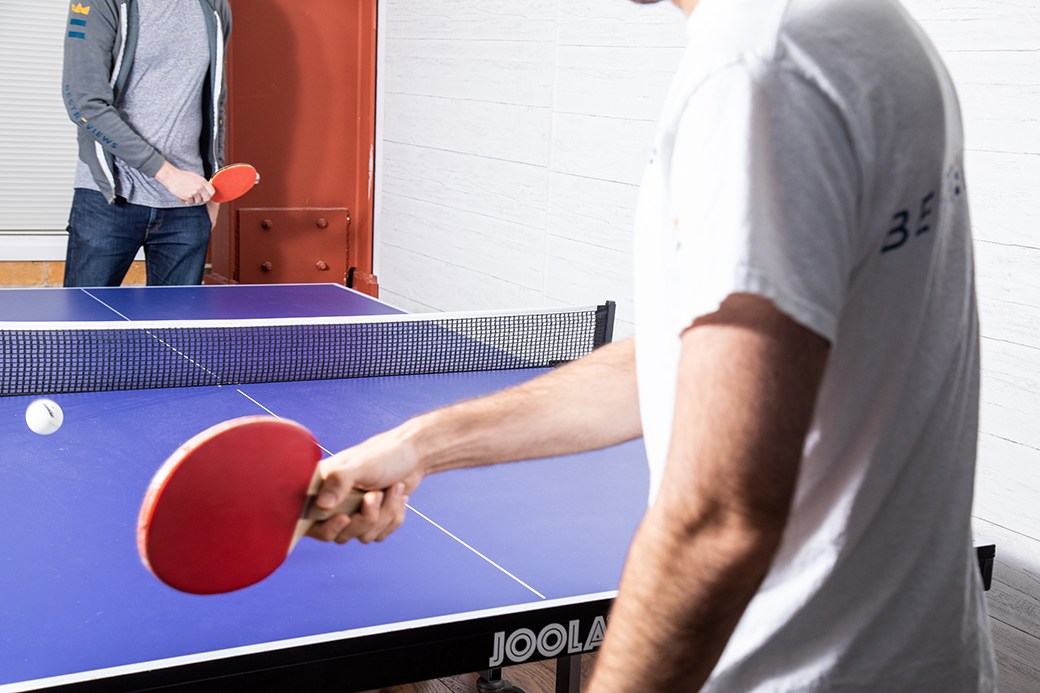 Beginning table tennis players should use a paddle with a longer handle, which provides an easier grip.

The first question to ask yourself when purchasing a table tennis set is what is your level of play: using the set a few times a year for family game nights or regularly playing fast-paced games with experienced players?

From paddle construction to ball composition, there are a number of factors that separate a beginner table tennis set from one geared toward experienced players and professionals. While we look at these factors in this guide, the biggest difference is in the price. You can expect to pay much more for a set to be used competitively than for one you only want to use occasionally. You don’t want to pay for more than you need.

Paddles: Are you buying a table tennis set for two people or a group? While some sets do include just two paddles, most include four, making one of these sets the perfect size if you want to play doubles.

Balls: Table tennis sets also include anywhere from two to more than a dozen balls. The average here is six to ten per set.

Case: A carrying case to keep the set together is also fairly standard with a set.

If you’re fairly new to the world of table tennis, you’re going to run across some terms to describe the performance of the paddle, including speed, spin, and control. Many manufacturers use their own systems for rating speed, spin, and control in their paddles. While this can give you a rough idea of how balanced a paddle is and how it will play, these different ratings can make it hard to accurately compare one manufacturer’s paddle with another.

Speed: This is the rate that you hit the ball. One of the primary determiners in ball speed is the thickness of the rubber on the paddle: the thicker the rubber, the more speed.

Spin: The rubber thickness also affects spin, a catch-all term that covers such actions as topspin, backspin, and sidespin. Spin can cause the ball to curve or dip in the air, making its trajectory less predictable and harder to hit. The thicker the rubber, the more potential spin on the ball.

Control: A paddle’s design can allow for more control so you can put the ball where you want it to go on the table. Generally, the more control, the less speed and spin. 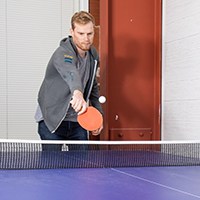 Did You Know?
It’s a fun pastime, but table tennis has also been an Olympic sport since 1988, and it has its own governing body, the International Table Tennis Federation.
Staff
BestReviews

What are called paddles in the United States are called rackets in other parts of the world. The International Table Tennis Federation favors rackets. Whatever you call them, they are the primary elements in a table tennis set. You want durable and high-quality paddles for the best performance.

What goes into a great paddle? Several parts determine which paddle is best for your needs: blade, rubber, and handle.

Blade: The blade is the flat part of the paddle that comes in contact with the ball. It’s typically made of wood with some carbon fiber or compressed paper incorporated into it. To be used competitively, the blade must be at least 85% wood. Blades have five to seven layers (referred to as five-ply or seven-ply), which help improve the paddle’s strength and performance.

Rubber: Glued to the front and back surfaces of the blade is a rubber/foam “sandwich.” The surface can be either pimpled or smooth, and the thickness varies. All of these aspects can affect the way the ball moves when it’s hit. Many competition-level paddles have black rubber on one side of the blade and red rubber on the other. The color indicates different thicknesses of rubber.

Handle: Straight or flared, short or long, handles come in a variety of shapes. Flared handles are more common in beginner sets because they’re easier to grip. The handle should be comfortable enough for extended play and durable enough that it won’t split or splinter over time.

While not all table tennis sets come with a case, most of them do. A case not only protects the paddles and balls but also keeps them together. A sturdy carrying case is more important if you frequently take your set on the road.

Some cases are made of soft cloth, but others have a hard, molded body for added protection. Some cases include compartments for storing the various elements of your set. Whatever type of case you get, it should have a sturdy zipper or other secure closure.

Look for a set that includes tape around the edges of the paddles, which can help to protect the paddle from damage.

Inexpensive: Those sets under $20 are typically for beginning players who play occasionally. These sets include two to four paddles and a few balls. The quality tends to be much lower than pricier sets, although these are perfectly suitable for light use.

Mid-range: In the $20 to $30 range, you can find higher-quality sets with four paddles and up to ten balls. These sets are best for people who regularly play table tennis.

Expensive: Over $30 is where you find the best-quality sets, including professional- or tournament-rated sets. If you frequently play against experienced opponents, you should focus on sets in this price range.

Did You Know?
If you’re interested in a competition-level set, look for the International Table Tennis Federation (ITTF) logo on the paddles, which indicates that the set meets ITTF standards for tournament play.
Staff
BestReviews 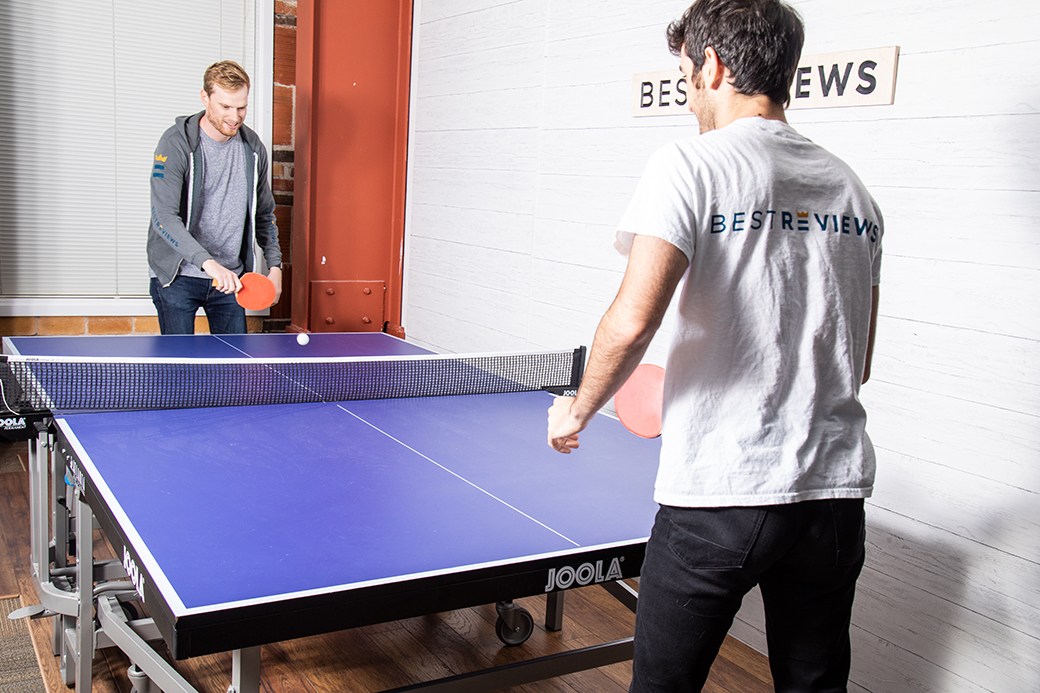 Q. Do these sets include a net and table?

A. Generally, no, although some that include a retractable net are becoming more popular. For the best table tennis experience, we recommend purchasing a dedicated Ping-Pong table for its durability and longevity.

Q. Are the paddles in these sets only for right-handed players?

A. Table tennis paddles can be used by either left- or right-handed players.

Q. Can these sets be used outdoors?

A. While a table tennis set can be used outdoors, it should never be stored outdoors where it can be exposed to the elements. Any exposure to moisture can cause the wood to warp and the glue to loosen, which can ruin the paddle. 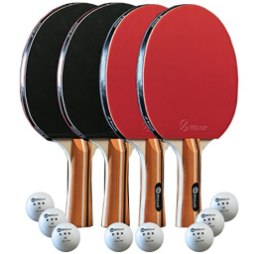 Best of the Best
JP WinLook
Pro Ping Pong Paddle Set
Bottom Line
Whether you're new to table tennis or have pro-level skills, this set has everything you need for your game – well-made components and plenty of rackets and balls.
Shop Now 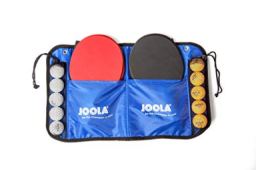 Best Bang for the Buck
JOOLA
Family Table Tennis Set
Bottom Line
Most players who are looking for a complete set for the game will find this JOOLA, a trusted brand in table tennis, to be both affordable and practical for their needs.
Shop Now 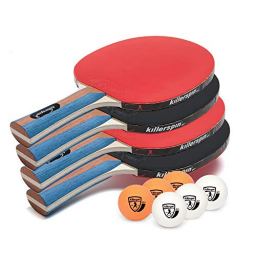 Top Pick
Killerspin
JETSET4
Bottom Line
Aside from a few quirks, this is a quality table tennis set made by a reliable name in the industry.
Shop Now 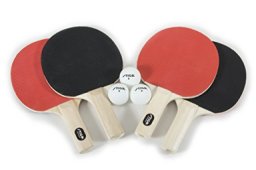 Top Pick
STIGA
Classic 4-Player Table Tennis Set
Bottom Line
Though there are a few minor concerns about the handles and balls, you'd have a hard time finding a lower-priced set with better paddle design or performance.
Shop Now 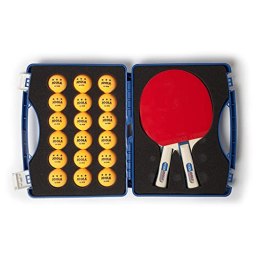 Top Pick
JOOLA
Competition Table Tennis Tour Case with 2 Python Rackets
Bottom Line
Not the best choice for more than 2 players; otherwise it's a decent JOOLA set with a case that's even more impressive than the paddles and balls.
Shop Now