Affordable croquet set with one of the best carry cases around.

Made by a well-known outdoor sports equipment manufacturer. 28-inch handles can be used by kids and adults alike. Comes with instructions and diagrams for first-time players.

Croquet balls get dented or damaged easily and will require replacement. 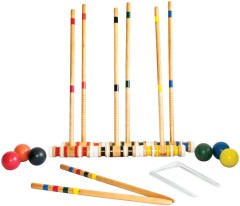 Durable mallets and balls hold their color well along with wire wickets and goal posts that can withstand rainy weather.

Enough equipment to support a 6 person croquet game. Pieces pack up nicely into a carrying bag for easy storage and transport when not in use. Wire wickets are coated for protection from the weather making this great for year-round use.

Does not include a stand for the mallets, which is necessary for some. 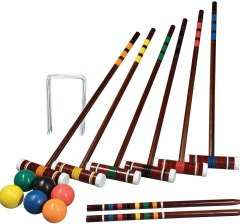 An inexpensive alternative to the Franklin Professional Set that features lighter mallets.

The lightweight mallets are great for kids and have brightly colored handles. The chestnut finished wood looks and feels great. Includes everything needed to play and comes in a convenient carrying case.

The cheap wood can cause the mallets to fall apart after moderate use. 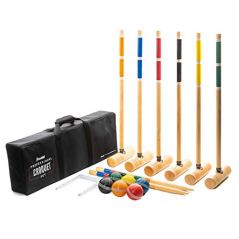 If you need a croquet set for adults or older children, this is a great option. Includes 6 mallets and balls in 6 colors, plus a carrying case, wickets, and stakes.

The carrying case is on the flimsy side. Some customers received duplicate color mallets. 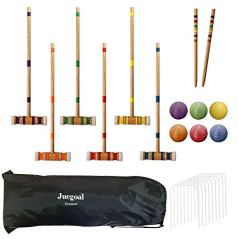 Casual croquet set that is ideal for beginners, kids, or parties.

The sticks have a bit more colorful detail than most sets, plus they’re well-made. Sticks and mallets are coated with an eco-friendly varnish that is water-repellent and mold-proof. Despite being on the thin side, wickets are extremely durable.

Comes with a carry case, but it's a bit small and not all pieces fit.

If you're after an amusing outdoor game to play, croquet might be the answer. Whether you're a complete beginner or an actual pro, you'll need your own croquet set before the fun can begin.

You'll find all kinds of croquet sets available, some of which meet professional standards and others that are for beginners. While not everyone needs a regulation croquet set, it's important to consider what you need from yours before you choose. Are you looking for something to mess around with or do you want to seriously learn the finer points of croquet? 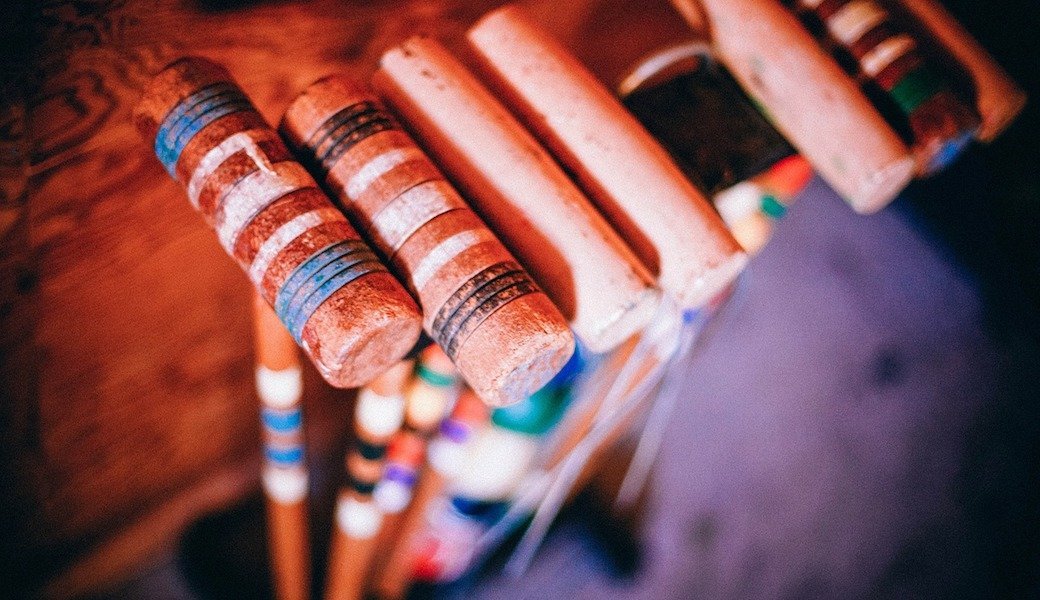 Croquet mallets should be made from hardwood, but some are made from better quality wood than others.

Parts of a croquet set

Before you get started, you should know more about the parts of a croquet set and what you should expect to get for your hard-earned cash.

The mallet is the equivalent of a club in golf – it's what you use to hit the ball with. You can find croquet sets with anywhere between two and eight mallets, though six seems to be the most common option. You'll need one mallet per player, so make sure there are enough to go around. Officially, croquet should only have two, four, or six players (playing either individually or in teams), but there's no reason you can't play with more people, should you choose to.

You need balls in your croquet set. Otherwise, you'd be swinging your mallets at thin air. Regulation balls weigh 16 ounces and are made of hardwood, but some sets offer lighter balls and balls made from resin rather than wood. There's nothing wrong with opting for a lighter hardwood ball (12-ounce balls are a common choice), especially if children will be playing or the mallets are lightweight. However, you should be aware that resin balls aren't very hard wearing, so they're not ideal if you plan to play a lot of croquet. You should have as many balls as you do mallets, as each player needs their own ball.

Did you know?
Some mallets feature hexagonal or octagonal handles. Many players prefer the way they feel to grip, compared to standard round handles.

Wickets (which are sometimes also known as "hoops") are the arches that you must hit your balls through. They're generally made of steel with straight legs that can easily be hammered into the ground. Official tournament wickets are usually heavier duty than those for recreational use and are only slightly wider than the diameter of the ball. Recreational wickets are wider than tournament options, making it easier to get the ball through. Tournament-level croquet requires nine wickets, but some recreational sets feature six since casual players often prefer the smaller scale of "garden croquet."

Stakes – or "pegs" – are little wooden posts that go at either end of the pitch. You should have two in a set, as you must hit one when your ball reaches the top of the pitch and the other after going through all the hoops to finish your round. These are usually made of fairly thick wood, an inch or so in diameter.

Though obviously not essential for gameplay, most croquet sets come with either a stand or a carry case to help you keep all your croquet gear together and make it easier when transporting the set from one place to another. 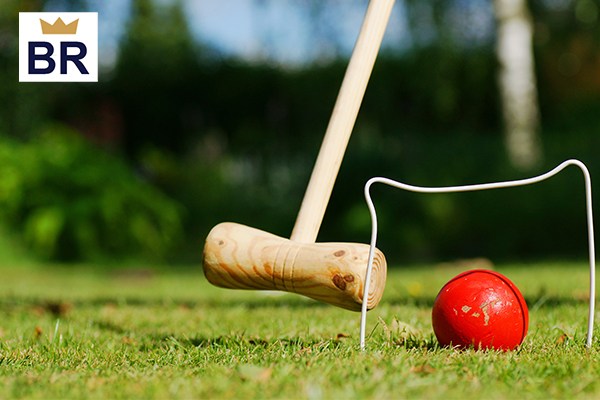 We research the mallet specs of each croquet set on our research list, noting both the length of the handle and the size of the head. 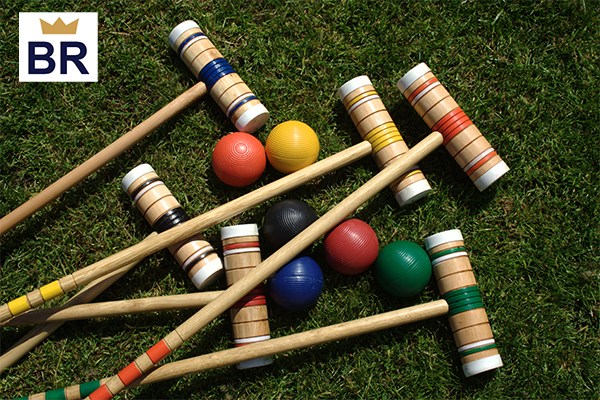 We find out how many mallets come in each croquet set. Each player needs to have their own mallet, so the ideal set size depends on how many people plan to play. 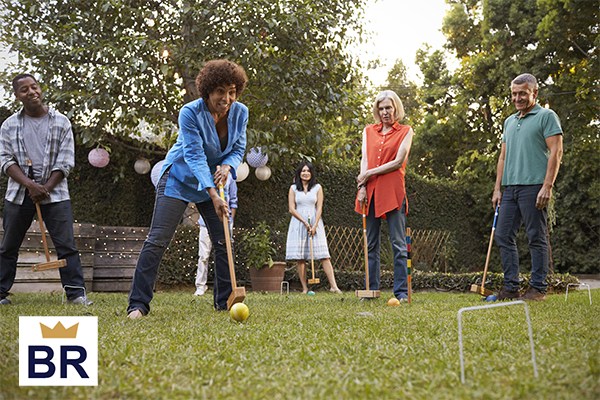 We appreciate croquet mallets with end faces or ring bindings, as these features help prolong the mallet’s life by preventing splitting. 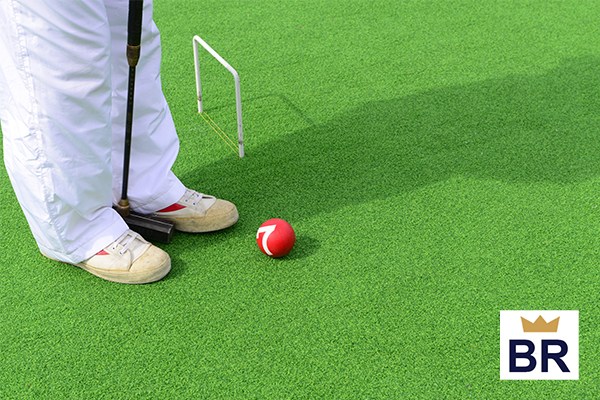 We find out the weight and material of the croquet balls in each set. While a standard ball weighs 16 ounces and is made of hardwood, some sets have lighter balls of around 12 ounces that are made of resin. 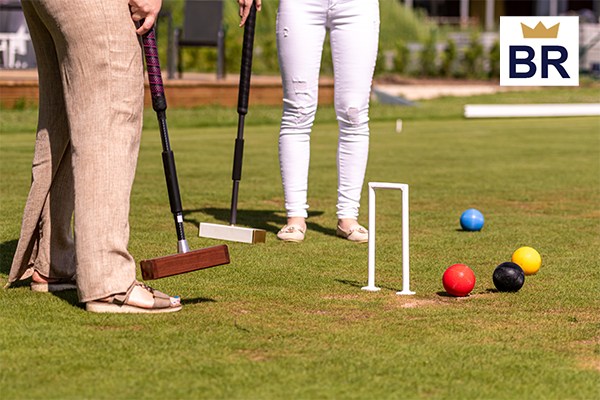 We look at what material the wickets (also called hoops) are made of and how many come with each set. The most durable wickets are made of steel. Tournament croquet requires nine wickets, but some recreational sets only include six wickets. 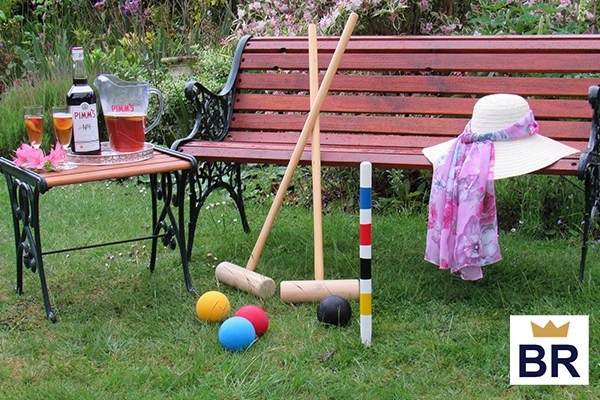 Traditional croquet mallets have round heads, but some newer models have square heads. While the shape of the head doesn’t affect your game, we still note it in our research because some people find it easier to line up a shot with a square-headed mallet. 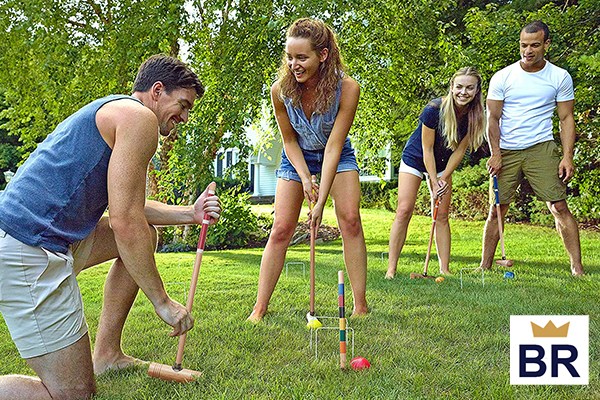 We note the type of wood used to make the mallet handle. The best material is often rigid hardwood (as opposed to softwood). 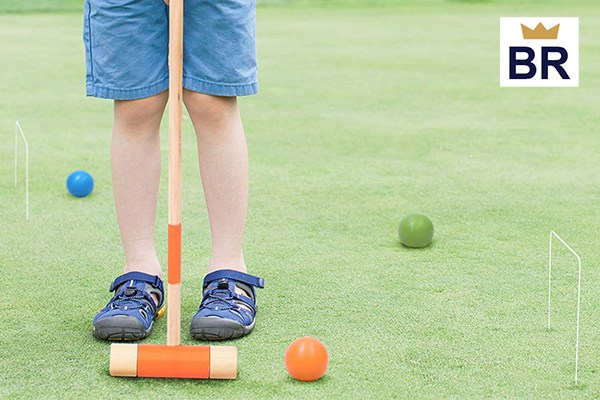 We appreciate croquet sets that are weather-resistant and able to withstand rain and shine. 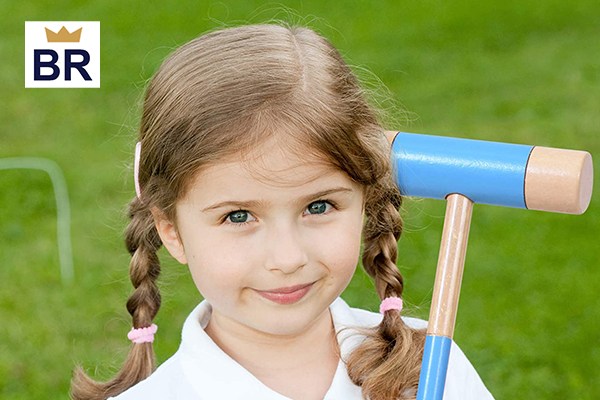 For first-time players, it’s helpful if each kit comes with instructions. Many of the best kits also include diagrams. We take note of this in our research. 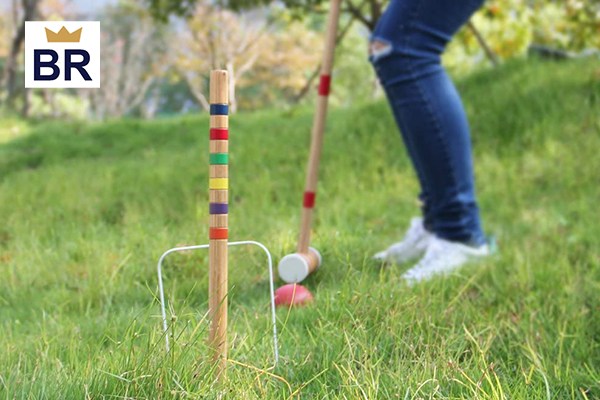 We appreciate croquet sets with carrying cases or stands. This makes it easy to keep your equipment together, especially when traveling.

Considerations for selecting a croquet set

Check the size of the included mallets before buying your croquet set. Look at both the length of the handle and the size of the head. Shorter-handled mallets are easier for children to use, so bear that in mind if you'll be playing with little ones. The average size of a mallet head is between 9 and 9.5 inches long, though you can find larger options. Beginners should go with standard-sized mallet heads as they're easier to control, but experienced players often prefer the increased performance you can get from longer heads, once you know how to handle them.

A high-quality, sturdy mallet should weigh between 2 pounds 12 ounces and 3 pounds 4 ounces. However, some cheaper sets offer lighter mallets, which aren't ideal in most cases, but they can make playing easier for kids. If your chosen set features mallets that weigh less than 2 pounds 7 ounces, opt for a lighter 12-ounce ball.

It's important to consider the sizes of any croquet sets you're looking at – how many mallets, balls, wickets, and stakes they contain. Make sure your chosen set features enough wickets and balls for each player to have one. So, if you're a family of five, a set with four mallets and balls isn't going to cut it. If you want to play regulation croquet, you'll need nine wickets and two stakes, but if you don't mind playing a stripped-back game, you can get by with six wickets.

You can find full croquet sets starting at about $30 to $40, with smaller kids' sets costing even less. Sets in this price range are fine for occasional recreational use.

At the upper end of the price spectrum, top quality regulation level sets can cost as much as $900 to $1,000, but they're likely to be overkill for the casual player. 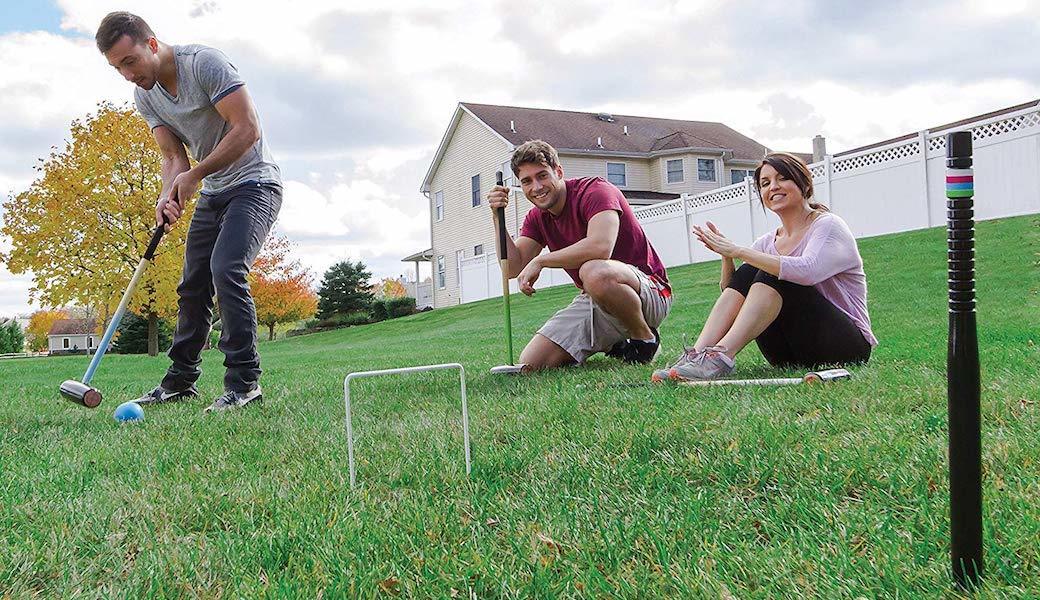 Unless your chosen croquet set also features lightweight balls, it can be hard to hit a shot a long distance with a light mallet.

Q. What sort of surface do I need to play croquet on?

A. Croquet tournaments take place on perfectly manicured lawns. While you don't need to go to quite those lengths to prepare your croquet pitch, you do need a lawn with close-cropped grass, as the ball won't roll easily over long or uneven grass. The playing area should also be as flat as possible. Any slopes or bumps will infringe on your ability to play.

Q. Should I choose a regulation croquet set?

A. You can buy croquet sets that stand up to all the official regulations. If you plan to play in croquet tournaments, you should ideally practice with a regulation set, as it will give you the closest experience to playing in a tournament. If you usually play with a non-regulation set, it will put you at a disadvantage come tournament time. However, if you're only playing for fun, there's no need to splash the cash on a regulation croquet set.

Q. Can you play croquet all year round?

A. Since croquet is a lawn game, you can only really play it when the weather is good. Summer is the ideal time for croquet, but you may be able to play it through spring and fall if the climate is right where you live. 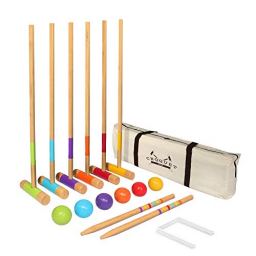 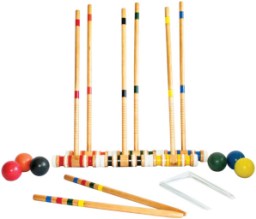 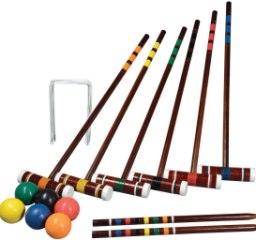 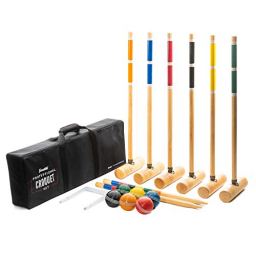 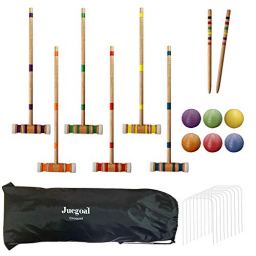 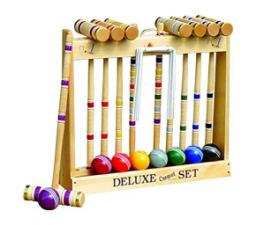 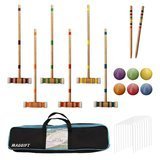 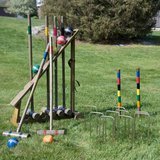 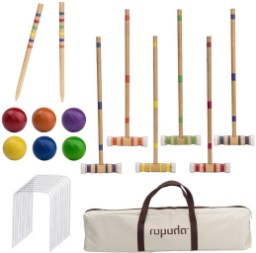 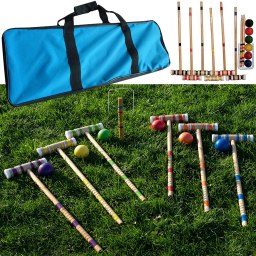