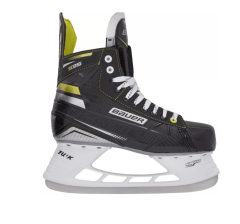 This product is comfortable to use and is best suited for recreational play.

Made with 3D poly carb quarter to allow for flexibility and comfortable entry. Designed with stainless steel blade for greater durability and mesh material guard on tongue for extra comfort.

Not ideal for rough play. 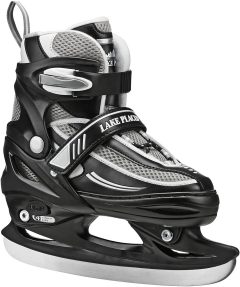 This affordable product is an excellent choice for experienced young players.

Made with strong hybrid-style boot and deluxe padding for extra comfort. Designed with stainless steel blades for durability and reinforced ankle support for stability. Securely closes with buckle, strap, and laces.

Not ideal for beginners. 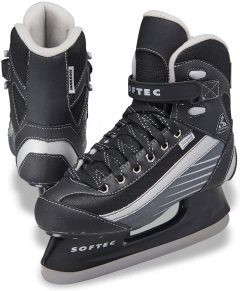 This product is designed for comfortable and safe recreational play.

Has cushioned foam padding for comfort and Thinsulate-lined material for warmth. Blade made with stainless steel runner. Securely closes with Velcro and adjusts with ankle strap and lace loops.

Not ideal for competitive play. 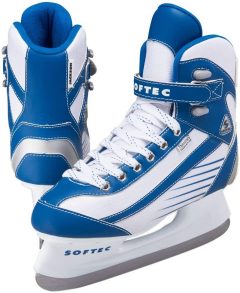 This pair will keep you comfortable on the ice during recreational games and skating.

Product is more expensive than other options. 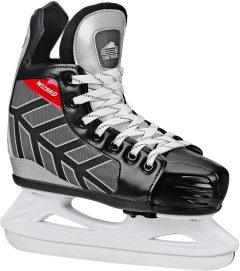 This product is ideal for young players who enjoy both recreational skating and competitive play.

Constructed with reinforced ankle support for stability and extra padding for comfort. Made with stainless steel blade for durability. Designed with laces for adjustable and secure fit.

Hockey is one of the most exciting, fast-paced sports to play, but you can’t glide over the ice as quickly and powerfully as you’d like without the right hockey skates.

Ice hockey skates are an essential piece of gear for any hockey player. Hockey skates have a boot like any other pair of ice skates, but they’re usually more rigid and lighter in weight than figure skates with added padding to protect against the impact of hard pucks and sticks. The skate blade attaches to the boot with a plastic holder and is rounded at the front and back, so it’s easier to turn and maneuver.

With so many ice hockey skates available, it’s easy to get deked out by all the options. You must consider your play level, the fit type you prefer, and the blade material that will serve you best. 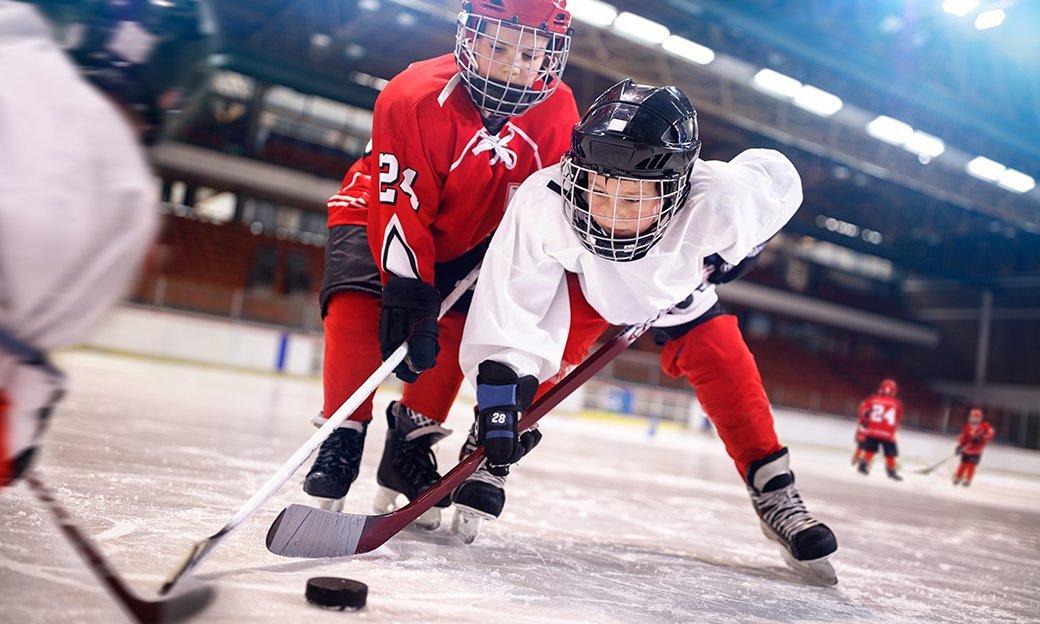 If you buy a pair of heat-moldable skates, you’ll usually get the best results at home if you use a hairdryer to heat the boot. You can also bring them into a hockey specialty store and have them heat the skates for you.

When you shop for ice hockey skates, it’s important to use your level of play as a guide. Novice hockey players don’t need the same features in their skates that experienced players do, so you want to choose a pair that matches your skill level.

Tapered or narrow-fit skates have a shallow instep, a narrow heel, a slightly narrowed midsection, and a standard toe. They work well if your main concerns are speed, agility, and control.

Contoured or anatomical-fit skates have a standard instep, snug heel and midsection, and standard toe. They work well if you desire a more powerful stride while still maintaining control.

Classic or comfort-fit skates have a deep instep, slightly wide heel, wide midsection, and wide toe box. They are lightweight and comfortable, so they help you glide more naturally.

Finding the right size for ice hockey skates can be a challenge because manufacturers use different sizing charts. In most cases, you should choose a smaller skate size than your regular shoe size. If you choose skates that are too large, your foot will shift inside and slow you down on the ice. There’s also a risk of blisters and other injuries. If you wear skates that are too small, though, they’ll be uncomfortable and may cause cramps.

As a general rule, go down one-and-a-half sizes from your shoe size when you’re choosing your hockey skates.

However, if you’re new to playing hockey or only play occasionally, you don’t necessarily have to splurge for stainless steel blades. Nickel-plated steel or other lower grades of steel are usually fine for blades on recreational hockey skates.

An ice hockey skate’s blade profile describes how curved it is — or how much of the blade comes into contact with the ice when you’re standing in a neutral stance. You can usually choose from 9-, 10-, 12-, and 13-foot profiles, with the lower numbers being more curved and allowing for greater maneuverability. Goalie skates are almost entirely flat, which gives them a 25-foot profile. Flatter blade profiles (higher numbers) provide more stability but can limit your agility and maneuverability.

Ice hockey skates need extra protection for the feet because there’s a good chance of impact from a hard hockey puck or another player’s stick. The boot of the skate usually has especially good protection in the toe, along the sides, and at the tongue. The amount of protection you need often depends on the speed and skill of your game, so you may want to make adjustments to the protection in your boot to suit your playing style.

Ice hockey pucks: A&R Sports Classic Ice Hockey Puck
You can’t play — or practice — hockey without a puck to move around on the ice. We like this one from A&R Sports Classic. It’s made of vulcanized rubber and works well for both indoor and outdoor hockey.

Ice hockey sticks: Franklin Sports NHL SX Comp 1010 Street Tech Hockey Stick
Besides your skates, a hockey stick is the most essential piece of gear for a hockey player. We love this stick from Franklin Sports because it’s affordable and features a wide, heavy blade that’s ideal for new players who are learning the game.

Ice hockey skates vary in price based on the type, materials, and other features. Most pairs cost between $35 and $600.

Inexpensive: Basic recreational hockey skates are the most affordable. They usually have non-exchangeable runners that are made of lower-quality steel and aren’t heat-moldable. You’ll typically pay between $35 and $80 for these skates.

Mid-range: Elite hockey skates are more expensive. They typically have exchangeable runners, and many pairs are heat-moldable, too. These skates generally cost between $80 and $300.

Expensive: The priciest ice hockey skates are elite skates. They have exchangeable stainless steel runners and are heat-moldable. They offer the most protection for the foot, too. You’ll pay between $300 and $600 for elite skates. 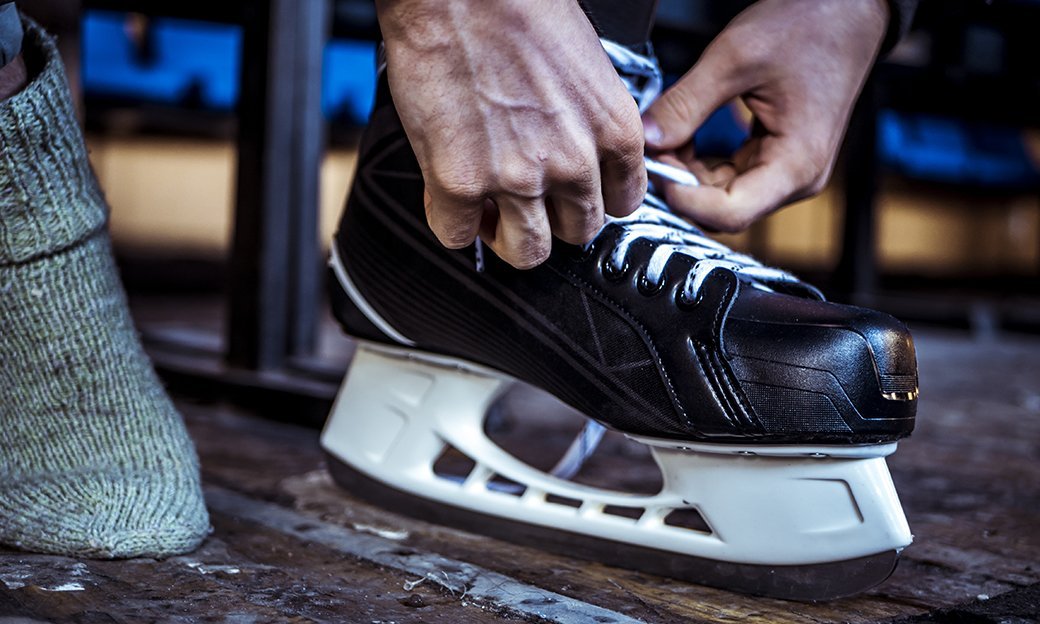 You can tell that your skates fit well if you can only fit one finger between the back of the skate and your heel when you’re leaning forward on the ice with your knees bent.

Q. How often do ice hockey skates need to be sharpened?
A.
It depends on how often you hit the ice and what your personal preference is. Some players like their blades to be ultra-sharp, so they sharpen after every game. Other players can go a couple of months between blade sharpenings. In general, you should sharpen them every 12 hours of use.

Q. How long does it take to break in a pair of hockey skates?
A. It depends on how stiff your skates are and how often you use them. In general, stiffer skates take longer to break in. With most skates, though, you can usually notice a difference after 10 hours of skating. For extremely stiff skates, it may take up to 40 hours of skating before you’ll feel comfortable wearing them in a game.

Q. How long does a pair of ice hockey skates last?
A. Several factors play a role in the lifespan of hockey skates. The quality of the skates, how often you use them, and how well you care for them are the most critical. If you purchase an elite pair of skates and only play one or two times a week, you may be able to get four to eight years of use out of them. If you opt for a lower-quality pair of skates or play three or more times a week, you may only get one to two years of wear out of them. 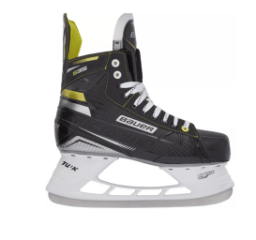 Best of the Best
Bauer
Senior Supreme S35 Hockey Skates
Bottom Line
This product is comfortable to use and is best suited for recreational play.
Shop Now 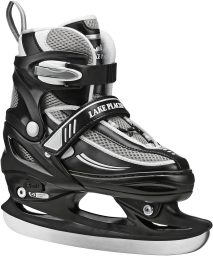 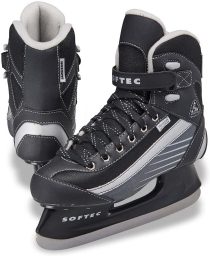 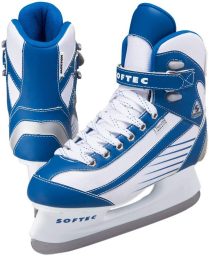 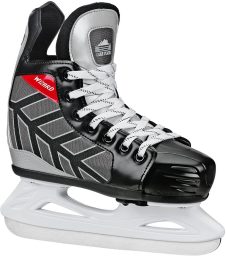