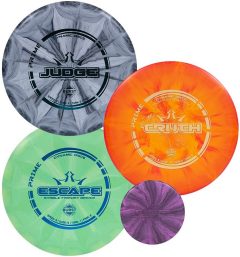 These discs were selected by World Champions at Dynamic Discs, so you can feel confident you have the right discs from beginner to expert.

Set includes 3 discs: 1 fairway driver (can fly on all angles and is even extremely useful as a roller), 1 midrange (has the speed to fly past other midranges and the stability to handle some power) and 1 putter (very versatile disc that holds a line and finishes straight on approach shots).

Some customers were disappointed with the colors they received. 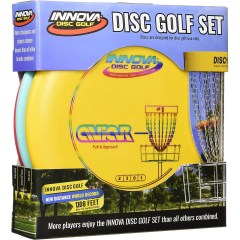 This kit is an affordable choice for a starter set and is approved by World Champions.

Set includes 3 discs: 1 driver, 1 mid-range, and 1 putter which makes it a great basic, starter set. Made with DX plastic for durability. Approved by Professional Disc Golf Association (PDGA.) Discs can be used in tournaments.

A couple of customers noted discs were a little too light. 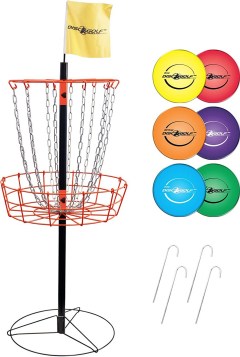 Complete set provides you with everything you need for a backyard disc golf game.

Includes a sturdy steel goal with basket and comes with stakes to keep it in place. 6 discs are included with purchase and make a great starter set for an avid disc golf player. Ideal for parties or as a gift.

Chains on basket are spaced out too much that discs may slip through. 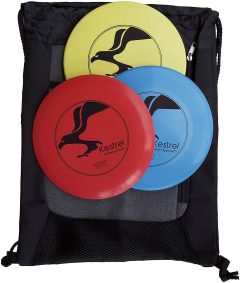 This kit is designed to suit both children and adults at any skill level. 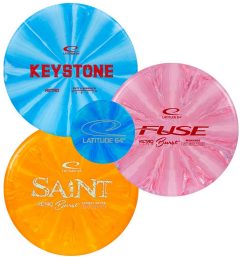 This set was handpicked by professionals, so you can be confident you have the right discs to improve your skills.

Set includes 3 discs: 1 driver (straight shooter for drives up to 350 feet), 1 mid-range (stable and predictable flight path up to 300 feet) and 1 putter (easy turnovers and straight flights even at low speeds.) Uses Retro plastic designed to break in more easily.

A couple of customers noted not liking the material.

Disc golf is an inexpensive sport that’s easy to get into, and a disc golf set is often all you need to start playing. Most sets include at least the three primary types of disc: one driver, one mid-range, and one putter.

Taking a single disc onto the course will put you in tricky situations and likely leave you frustrated. Each disc is designed for a specific range, flight pattern, and amount of power. Your driver should cover a long distance and put you in a good spot to approach the basket. A mid-range disc is versatile and capable of short or long throws, making it the right disc for the fairway or driving on short holes. Your putter is the disc you take out when it’s time to make your (hopefully) final stroke.

When choosing a disc golf set, you don’t get to choose individual discs; you must find a set whose discs meet your needs. There are a few popular brands that provide a wide selection of disc golf sets. Our buying guide can help you find the right set for you, and our recommendations can get you out and playing in no time. 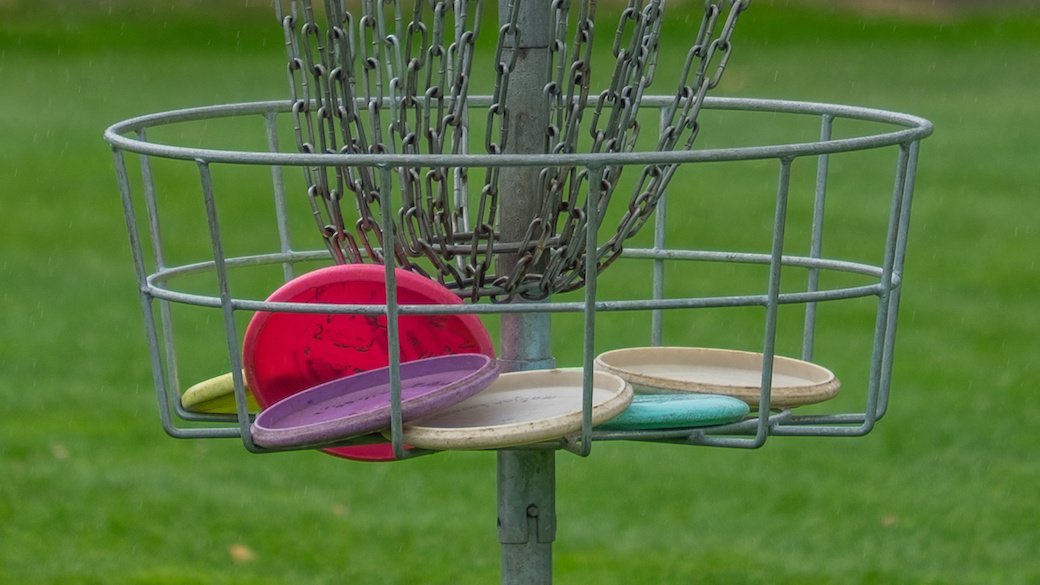 When you’re just starting out, more discs isn’t always better. In fact, it’s best if you bring only a few discs so you can familiarize yourself with their feel and flight patterns.

Flight ratings describe the way a disc behaves when thrown at a certain speed, usually listed on the front or back of the discs. This information can be useful, but most brands have their own flight rating systems, so it can be difficult to compare discs between brands. Fortunately, all disc golf sets contain discs of the same brand, so the flight ratings can give you a general idea of how a disc will behave in the air. 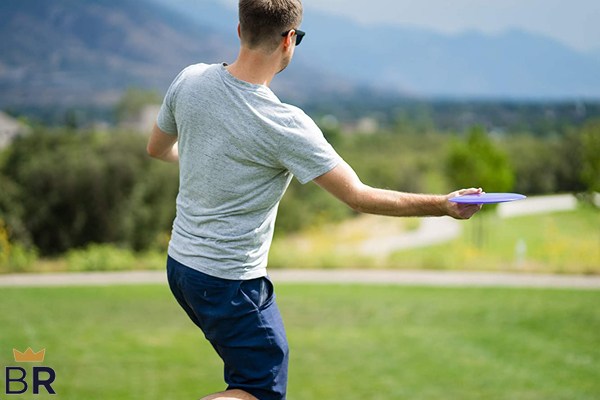 Drivers are essential to providing long range for a disc golf set. We research each product to see if the set can cover the distance needed. 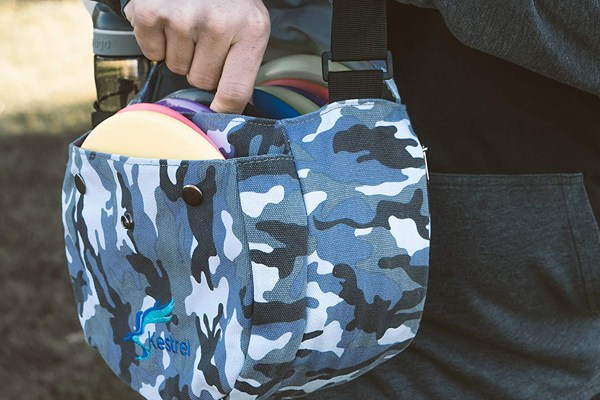 A mid-range disc is an excellent all-around piece for a set. Our investigation looks to these discs for precision and control. 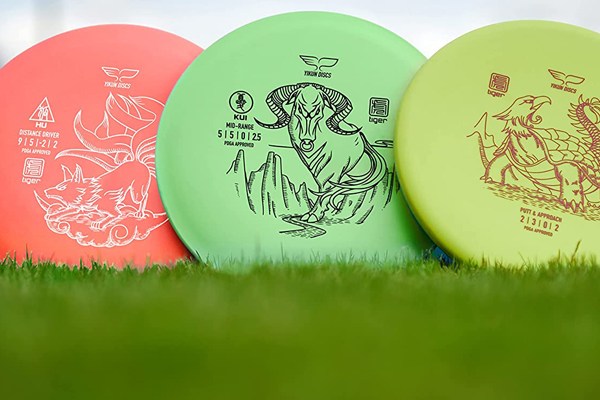 Every disc golf set comes with a putter for short-range shots. We vet each of these discs for their weight and ease of throw.

Each disc in a disc golf set has a speed rating which determines how quick a disc needs to be thrown. We make this low-speed rating a priority when evaluating beginner sets. 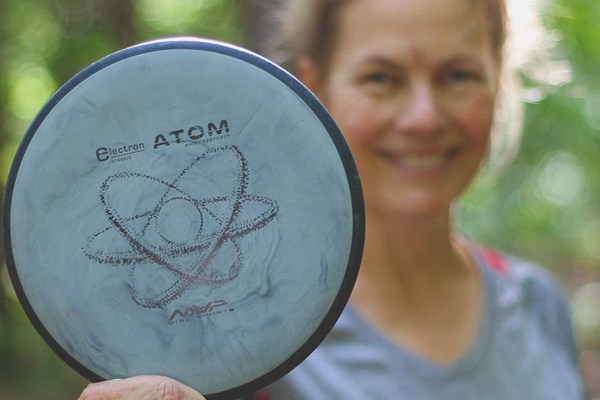 Glide ratings are essential to how far you can get down a course in one shot. We assess these ratings for every disc golf set that we recommend. 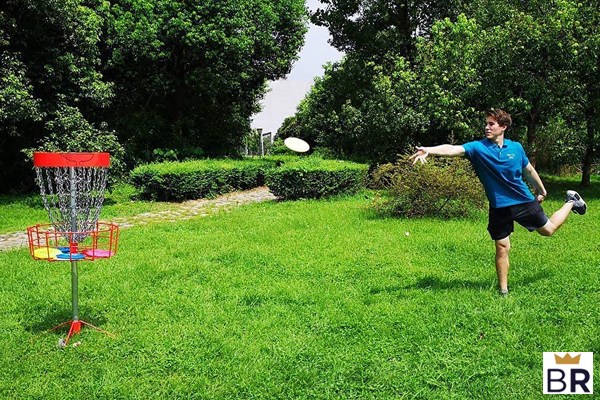 Some disc golf sets come with turn ratings which can affect every throw. We research the turn rating to figure out if each set is good for beginners or experts. 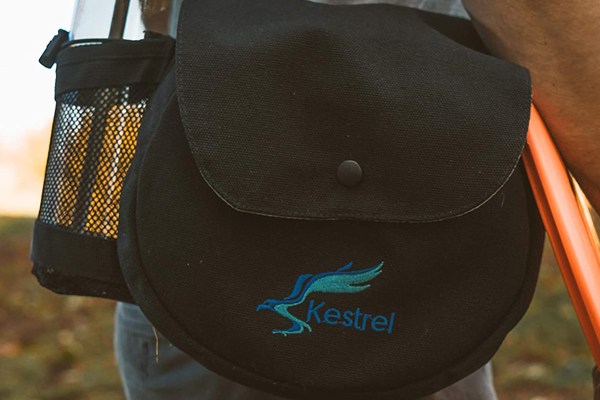 Some disc golf sets will come with bags to help carry your discs during play. We look for these bags to be both durable and easy to carry during a round. 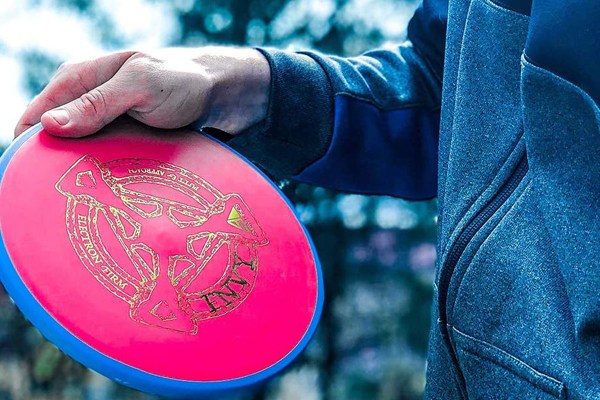 Each disc golf set will weigh a little differently depending on the brand. We do deep dives into each company to see how heavy their discs are and how much it affects play. 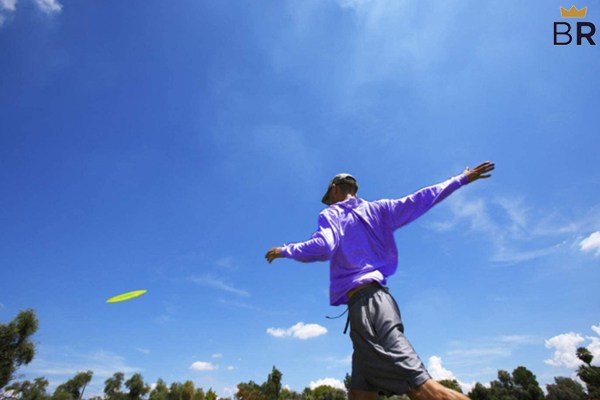 Disc golf sets can cost anywhere from $10-$60. We take into consideration the price of each product and how much value each set gives for the price. 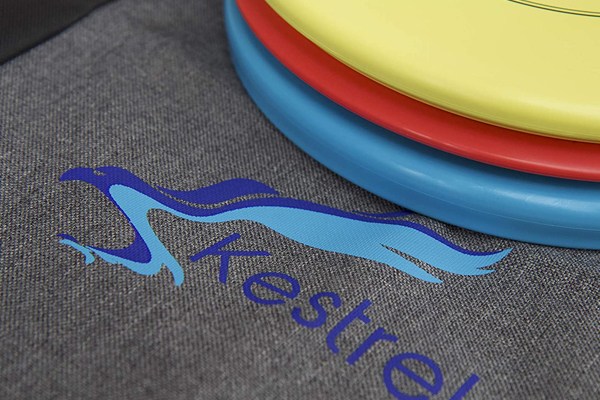 Most disc golf sets come with a driver, mid-range, and a putter. We research each disc within the set to make sure that each one delivers substantial quality.

Disc golf sets vary in the number of discs included, the plastic and weight of the discs, and the inclusion of additional accessories.

Most disc golf sets include three discs, one each of the three types. Some sets might include additional discs of different molds, giving you more options as you play. While extra discs are often included at a good value, we recommend sticking with a basic three-disc set unless you’re shopping for a set for multiple players. Using only a few discs when you start out will help you learn to use your discs in different situations and gain a better understanding of their behavior and flight paths. Then you can purchase individual discs separately once you know your preferences and needs better.

There are many different plastic blends that result in softer, firmer, heavier, or lighter discs. What materials are used, and what blends are best? Thanks to the secrecy of disc manufacturers, it’s a mystery. That doesn’t mean you can’t research the feel, weight, and performance of different discs.

Most brands have a few different types of plastic that may be used in the same mold. This allows a company to produce different versions of the same disc — the mold and shape of the disc is the same, but its material causes it to feel and behave differently.

If you think you’d prefer more control, opt for a grippy plastic or rubber. If you have good upper-body strength and want to throw discs fast and far, try a heavy plastic that won’t be easily buffeted by gusts of wind. Many beginners find a lighter, more flexible plastic to be the most comfortable.

While it’s possible to hold a few discs in your hand, it’s far more convenient to put them in a carrying bag, especially if that bag can also hold a water bottle and rag. Some disc golf sets include a carrying bag large enough to accommodate the included discs. These typically open at the top and give you easy access to your discs.

Did you know?
Most discs work just as well for forehand or backhand throws. Mixing it up can help you with difficult shots or conditions.
STAFF
BestReviews

Inexpensive: Low-priced disc golf sets that cost $10 to $20 usually include three discs: a driver, a mid-range disc, and a putter. In most cases, a carrying bag is not included. Even in this price range, many companies offer a reliable set of discs that you can use for years to come.

Mid-range: In the $20 to $40 range are disc golf sets that include anywhere from three to nine or more discs of different types. Some sets at this price may include accessories like a carrying bag or mini discs.

Expensive: High-end disc golf sets that cost $40 to $60 typically include six or more discs of different types and often come with a carrying bag. If you’re looking for discs for several people or you just want a wide selection to start out, consider a set in this range.

If you want to sound like you know what you’re talking about, there is a vast and colorful lexicon of disc golf terms you can use. Here are some of the basics: 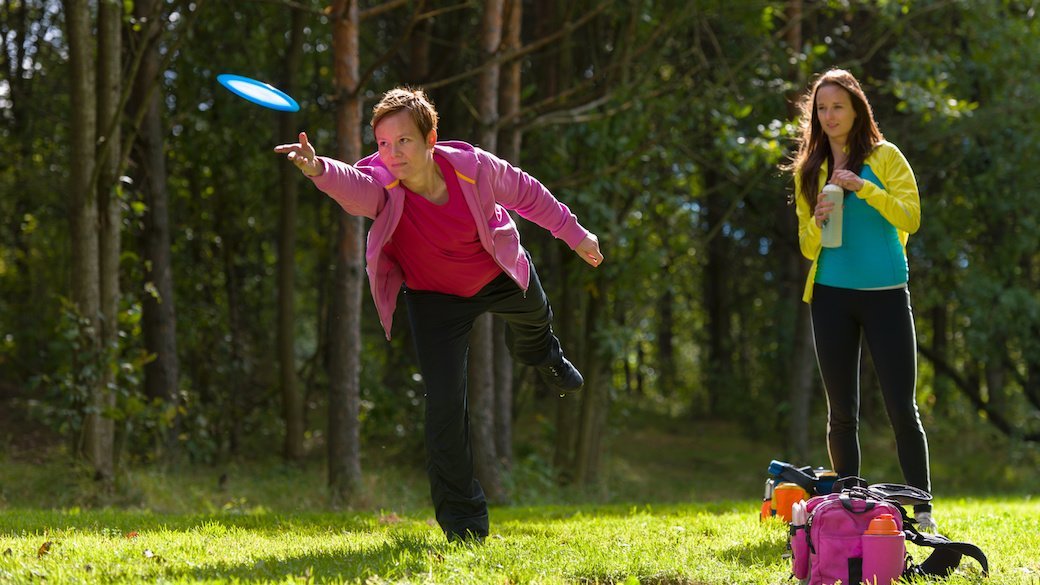 Though experienced players typically take several steps before a drive or throw, beginners should practice throwing with their feet planted to get used to the throwing motion.

Q. How long do the discs typically last?
A. While a disc can easily last for years with regular use, its most likely fate is not becoming damaged but being lost in the bushes. You can combat the chances of losing a disc by having other players spot your throws and by putting your name and number on your discs.

Q. Should I stick to one brand when buying discs?
A. While a disc golf set will include only discs of one brand, there’s no reason to limit yourself to one company. Each brand has its own strengths and weaknesses, and some brands may have gaps in their line of discs that can only be filled by the right disc from another brand.

Q. What’s the right number of discs to bring on the course?
A. Three is all you need: a driver for driving, a mid-range disc for fairway shots and difficult situations, and a putter to hit the links. Bringing more discs gives you added flexibility, but beginners are best off with three reliable discs that they trust to fly true. 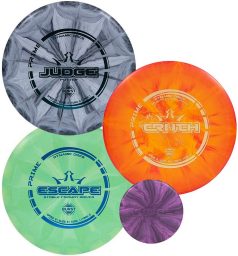 Best of the Best
D·D DYNAMIC DISCS
Prime Burst Disc Golf Starter Set
Bottom Line
These discs were selected by World Champions at Dynamic Discs, so you can feel confident you have the right discs from beginner to expert.
Shop Now 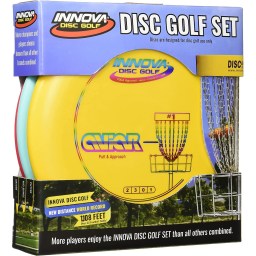 Best Bang for the Buck
Innova
Disc Golf Set
Bottom Line
This kit is an affordable choice for a starter set and is approved by World Champions.
Shop Now 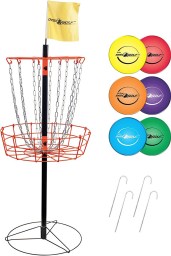 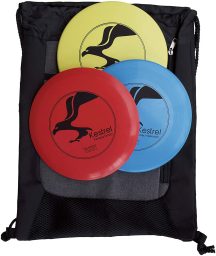 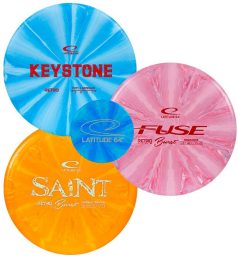 Top Pick
LATITUDE 64° GOLF DISCS
Retro Burst Disc Golf Starter Set
Bottom Line
This set was handpicked by professionals, so you can be confident you have the right discs to improve your skills.
Shop Now 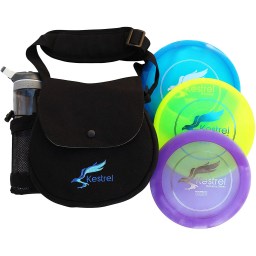 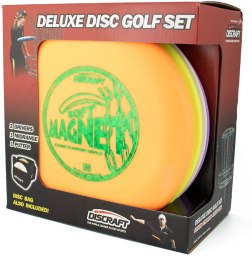 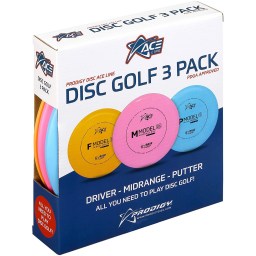 Top Pick
Wham-O
Mini Frisbee Golf Indoor and Outdoor Toy
Bottom Line
Start your future disc-golfer out young with this set that is made for kids to help them practice their skills.
Shop Now 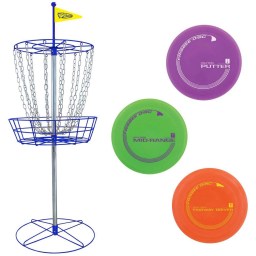