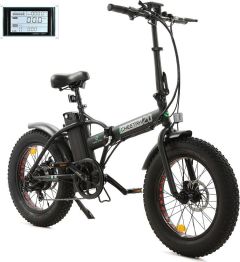 This fat tire electric bike is perfect for adults looking for an eco-friendly way to make their commute more efficient.

This bike has a 500-watt brushless rear geared motor and offers four working modes, including pedal assist, fully automated, pedal mode, and booster mode. It has a large-capacity removable battery that connects to your phone.

Can be a bit of a bumpy ride on less-than-ideal roadways. 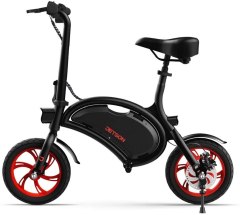 A lower-priced model that can travel up to 17 miles making it great for smaller commutes.

Has a 250-watt motor with a rechargeable lithium-ion battery. Weighs 34 pounds and handlebars fold down. Travels up to 15.5 mph and has a handlebar accelerator. Seat is adjustable. Includes LED lights in the front and back.

Better for short and infrequent trips. 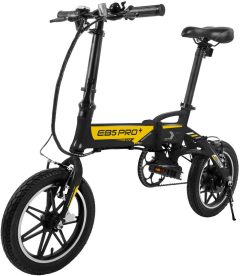 A very impressive model for the price point; in our tests, it provided a smooth ride and easy operation.

Maximum range of 15 miles on a single charge. Travels up to 15 mph. Premium auto-guard brakes. Easy to fold in half. Features a battery indicator on handlebars. Available in black, blue, or white.

May be harder to ride in hilly or bumpy terrain. 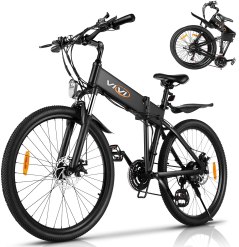 A bicycle with a compact fold and traditional design that allows it to be great for anyone traveling for work.

A 55-pound folding e-bike with a weight limit of 265 pounds. Features a 350-watt brushless motor and rechargeable battery. Travels up to 20 mph and 30 miles on one charge. Features 21 speeds and pedal mode.

Assembly instructions may not be clear. 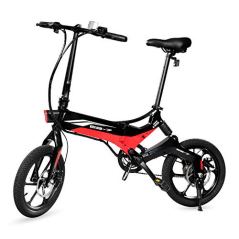 Speedy, simple to collapse and reassemble, and available in 2 slick designs.

Cruises up to 18 miles per hour. Nice range of 15 miles on a single charge. Convenient LCD battery level display. Easy to fold up for storage. Swappable battery fully charges in three to four hours.

Very pricy when compared to other models on the market.

Until very recently, there weren’t many folding electric bikes to choose from. What there were had limited features and modest practicality. That’s no longer the case, and in line with the general explosion in e-bike use, a whole range of well-designed and efficient models have come onto the market.

There’s now a folding electric bike in just about every style you can think of. Lightweight minibikes that fit easily into the trunk of the smallest car. City bikes and tourers that have all the performance of a standard electric bike but fold down conveniently for transportation or storage. There are even folding electric mountain bikes and fat-tire models that provide a superior ride on sand or snow.

Here at BestReviews, we’ve been investigating all the latest models so we can help you choose the best in terms of style, performance, and price. We’ve made several recommendations above that showcase popular options, and we look at the important features in more detail in the following folding electric bike buying guide. 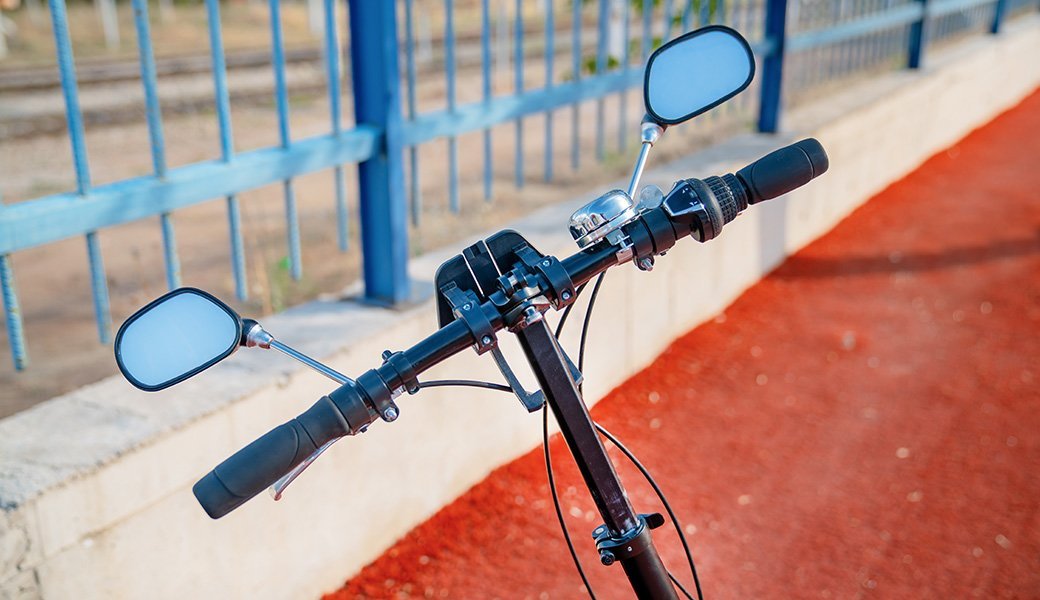 Electric power makes bicycling much easier, but don’t overlook maintenance and lubrication of the chain and wheel bearings. If you do, a lot of power will be wasted overcoming unnecessary friction.

People want different things from a folding electric bike, and your purpose will have a major impact on your decision. There are always compromises, but focusing on the use you expect from your bike will go a long way toward finding the perfect model.

Commuting: Folding electric minibikes are very popular with city dwellers or those commuters who drive their car to the edge of town and ride a bike the rest of the way. The big advantage is how compact these bikes are. However, range and comfort can be limited.

Recreation: Others want a more traditional style of bike, one that can be carried in the trunk on occasions or is easy to find space for in an RV, or takes up very little room at home when not in use. This type is ideal for those who live in apartments. The folding electric bikes offer a standard electric bike feel with the ability to fold for convenience.

Sports: As mentioned above, there are also more sports-oriented machines in the form of mountain or beach folding electric bikes.

Along with thinking about where you’ll ride your folding electric bike, you also want to check the dimensions of the bike when folded and its weight, especially if you expect to lift it in and out of your vehicle on a daily basis.

Also take a look at the mechanism itself. They’re usually very robust — we don’t see that as an area of concern — but some are a lot simpler than others. If you’re using your folding electric bike to commute, you want it to be straightforward. The last thing you want is to be fiddling around with your bike every morning and evening!

For your safety
Regardless of the law in your area, always wear a bicycle helmet. According to US statistics, 74% of fatal bicycle crashes involve head injuries, and 97% of those riders are not wearing a helmet.
STAFF
BestReviews

Wattage: In terms of outright power, all-electric bikes are rated by the wattage of the motor and range from 250 watts on the smallest minibikes to as high as 1,000 watts (which are quite rare). It’s not just about speed, it’s also about how the bike copes with gradients. Some 250- and 350-watt machines will give you a maximum incline, such as 10°. Steeper than that and the bike may not make it.

Voltage: Closely allied to wattage is battery voltage. Typically on folding electric bikes, this is 36 volts, though 48-volt models are not uncommon. Again, this is an indication of the power available.

How quickly you use that power — and therefore the available range — depends on two things. Speed is one. As with any vehicle, the faster you go, the more fuel you use. The other is whether you choose a throttle-controlled or pedal-assist (PAS) model.

Throttle-control models have no pedals, just footrests. You simply twist and go. The range on most is limited to 10 or 12 miles.

Pedal-assist models give varying levels of assistance. The more energy you put in, the less battery power you use, so the range can be as much as 25 miles. You’ll be fitter for it, too!

The position of the motor has an impact on how the bike feels to ride. Hub power is usual on minibikes because they have no pedals — they pull you along. It’s not really a disadvantage, but it can take a little while to get used to it. Full-size models might also be hub powered, though many use a crank drive. This feels more natural because it’s applying power in the same way you do when pedaling.

Gears don’t make a folding electric bike faster, but they do allow for better management of the energy available in the same way that you change gears on a pedal bike to cope with different slopes. Some folding electric bikes don’t have gears. Others may have a couple (which limits their effectiveness to urban roads), and some have gear sets like a standard road bike, giving them additional flexibility.

Many folding electric bikes have a maximum speed of around 20 miles per hour, which doesn’t sound particularly fast, but it’s quite a lot quicker than an ordinary bike, which would perhaps average 10 miles per hour or so.

Frame sizes tend to be aimed at the “average” rider, so if you’re particularly tall or short, it’s something worth checking. Whatever your height, you’ll want some ability to adjust the seat height so you can get comfortable.

You should also check the maximum rider weight rating. Some folding electric bikes are only designed to hold 150 pounds, but 300 pounds is by no means unusual.

A variety of suspension is available. Electric minibikes don’t usually have any, but they spend their life on city streets so it’s not important. At the other end of the scale, folding electric mountain bikes have suspension front and rear to cope with varying terrain.

Lights are often included (though not always). A battery charge indicator is another useful extra. It’s also not unusual to find a USB port so you can charge your smartphone while riding. A few models have multifunction trip computers that can provide all kinds of speed and mileage data.

Did you know?
Most folding electric bike batteries take at least a few hours to charge, but that electricity normally costs under $0.20. If you’re using your bike for commuting, ask your employer if they mind you plugging it in during the day.
STAFF
BestReviews

Inexpensive: The cheapest folding electric bikes are the minibike style, starting at around $450. These are great for short commutes or dashing around town.

Mid-range: Those folding electric bikes that are more like a standard bicycle start at around $600 and go up to a little under $2,000, depending on power and specification. There’s a lot of choice in this price bracket, with a number of robust all-rounders that are virtually indistinguishable from non-folding electric bikes.

Expensive: High-end folding electric bikes are usually much lighter, though not necessarily more powerful. These can cost from $3,000 to $4,000.

Battery: When you’re looking at prices, it’s also worth checking what a replacement battery would cost. The battery should last several years, but if the bike is looked after properly, it should outlast the battery. Prices vary considerably, but cheap versions may have a shorter working life, so you need to compare carefully.

Q. Do I need a license for an electric bike?
A. Not normally, but it depends on state legislation. The US federal government has been promoting a national set of standards since 2019, but at the time of writing they haven’t been accepted everywhere.

In theory, Class 1 and 2, which cover electric bikes of less than 750 watts and capable of under 20 miles per hour should be treated like bicycles. Many folding electric bikes fall into this category, so no problem there. Class 3 electric bikes up to 28 miles per hour could be subject to further rules. We strongly suggest you check your local statutes so you’re sure which regulations, if any, apply to you.

Q. Which is more important for e-bike batteries, volts (V) or ampere-hours (Ah)?
A. Both are equally important, but they are telling you different things.

First, you need a certain amount of volts to power the motor (technically, volts measure electromotive force). So if you have a 350-watt motor and the specification demands a 36-volt battery, you can’t use a 24- or 48-volt battery. It has to be 36 volts.

Q. What is regenerative braking and is it worth having on my folding electric bike?
A. A vehicle in motion creates kinetic energy. When you hit the brakes, that energy is lost. You know energy is being created because your brakes get hot. Even on bicycles, the brakes warm a little. Regenerative braking harvests that energy and converts it to a battery charge. It’s a great idea, but the system adds bulk — and cost — to the vehicle, and on an electric bicycle the gains are small. Some high-end machines use it, but we haven’t yet seen it on a folding electric bike. The technology would have to become way more efficient to make it viable. 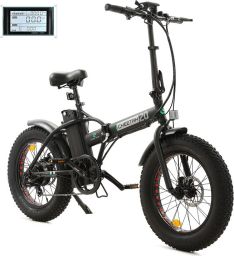 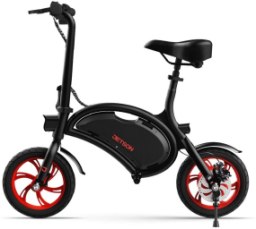 Best Bang for the Buck
Jetson
Bolt Folding Electric Bike
Bottom Line
A lower-priced model that can travel up to 17 miles making it great for smaller commutes.
Shop Now 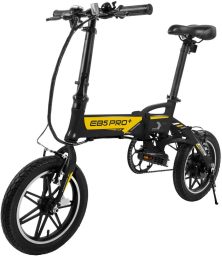 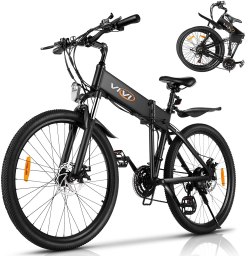 Top Pick
Vivi
Electric Foldable Bike
Bottom Line
A bicycle with a compact fold and traditional design that allows it to be great for anyone traveling for work.
Shop Now 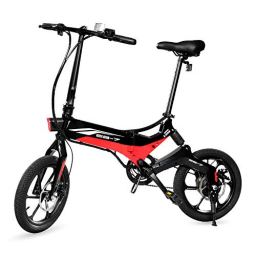 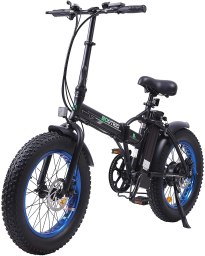 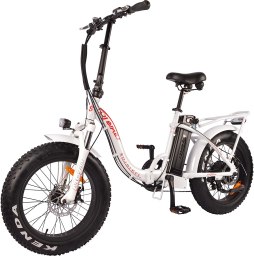 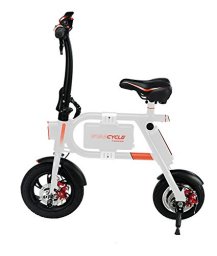 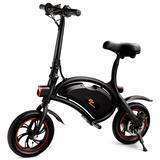