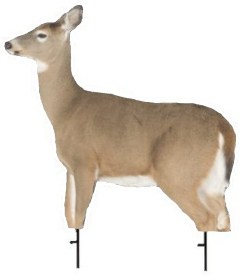 This inexpensive option is both lightweight and easy to fold without sacrificing realism.

Sets up and tears down very quickly. Easy to move and store. Uses real photos of deer to preserve realism. Depicts whitetail doe with her head in a semi-alert pose to lure bucks.

Moves a lot in high winds. Some users felt the mounting stakes were flimsy. 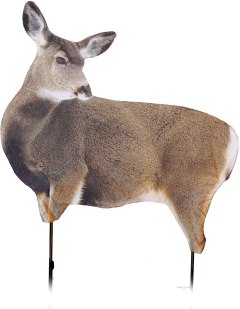 Weatherproof canvas with an HD photo of a real deer. Lightweight and folds quickly. Easy stake down. Packs very small. Withstands the wind. A mule deer decoy, but also works for whitetail.

This is a flat 2D deer decoy. Some users thought the posture was not ideal. 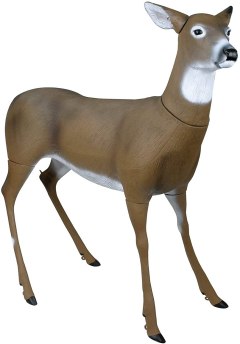 An extremely realistic-looking doe decoy that fools the bucks.

All the pieces fit inside the body of the decoy for easy transport. A great-looking decoy. Very realistic, particularly in wooded settings. Lightweight and easy to set up.

This is a hand-painted plastic decoy. It does not have flocking.

Both decoys fold flat and fit easily inside a backpack. Can be used during feeding situations and at all stages of the rut. Decoys can be used separately or together to enhance versatility.

According to some users, the folding process can be frustrating for the first few tries. 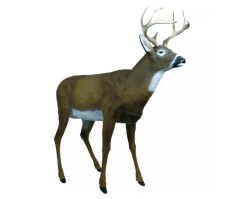 A realistic decoy that is easy to set up and transport anywhere.

Features limbs that twist and lock. The limbs, head, and antlers can be stored in the body for easy portability. Rear leg can hold scent pads and front leg can hold electronic game calls.

Pricier than other options on the market.

For the enthusiast, the deer hunting season never seems long enough, so you want to do whatever you can to maximize your success rate in the limited time available. Deer decoys are a proven way to do this. There are a number of different versions designed to meet the needs of hunters who stalk and those who wait patiently in a blind or hide.

In order to offer you the best buying advice possible, BestReviews has combined its own research with expert input to make some recommendations. The deer decoys we've chosen should meet your needs however you hunt.

We've also put together the following deer decoy buyer's guide to give you a broader view of the subject. 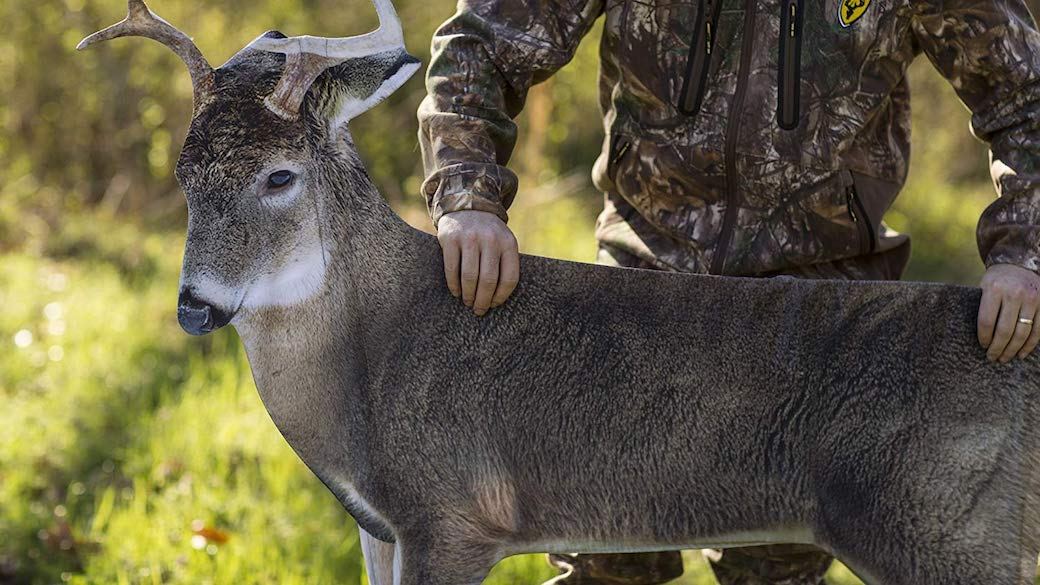 Deer decoys can get damaged by amorous bucks. Some manufacturers offer spare sections so you don't need to replace the whole thing.

These decoys are two-dimensional, frequently photographic reproductions of real deer (though not always). Favored by archers, they are often just the deer’s head or the head, neck, and shoulders. These decoys are lightweight, so you can move them around relatively easily, and they come with different attachment options that may include fixings for undergrowth, bipod or tripod, and to the bow itself. This decoy needs to be positioned in cover because the hunter is usually right behind it.

These decoys can be a doe or buck and two- or three-dimensional. Some are full body – right down to the hooves. Others stop near the top of the leg. They may or may not have some form of ground spike to keep them upright and fixed in place.

There is a third product that can be used as a decoy: a deer archery target. Although they're designed for practice – they have a high-density section that crossbow bolts and arrows can't penetrate – it is possible to use them as a deer decoy. though they can be quite heavy and may not be as easy to move around as you’d like. (We should point out that the reverse is not the case: deer decoys should never be used as archery targets.

This is important, both in your vehicle and out in the country. Some two-dimensional decoys fold down quite small and some don't. In breezy conditions, the latter can be difficult to manage.

Three-dimensional decoys usually come apart. On good ones, the head and legs fit inside the main body when disassembled, leaving you with just one thing to carry.

There are a couple of inflatable decoys. These are very compact when not in use and ready to use quickly and quietly, but the possibility of punctures means they haven’t proven very popular.

For full-size decoys, this is vital. If you're struggling to put it together, you'll make a lot of noise. It pays to check owner feedback. Look online for some opinions of people who have put the decoy to practical use in the field.

A major consideration since you're making a considerable investment, so you want it to last more than one season. You expect products that will be used outdoors to be waterproof, but not all are, and some are poorly constructed (again, check reviews by decoy users).

On deer decoys, realistic features include joints, allowing what is claimed to be “natural” movement of the head and/or neck. Others have flocking or a suede-like covering to look more natural and prevent unnatural reflections off the surface. Still others have soft tails that wag in the breeze. Whether any of these features have a great deal of practical impact is open to debate. There's a good chance a buck in rut isn't too concerned about the finer details!

These include areas for the insertion of scent pads, which a few of the high-end deer decoys have. There are also decoys that can accommodate remote deer calls, but caution is needed with these because some states ban the use of electronic decoy devices.

Did you know?
The term “archery target” can be a bit confusing. Some are designed just for practice, but others make perfectly good deer decoys, too.
STAFF
BestReviews

The majority of the deer decoys we looked at fall within a fairly narrow price range of around $60 to $200.

Not surprisingly, the cheapest deer decoys are 2D models – both stalker and stationary types – that cost from $60 to around $100.

Depending on features, 3D deer decoys can cost as much as $200, though in our opinion there doesn't seem to be any real benefit to spending more than $150. 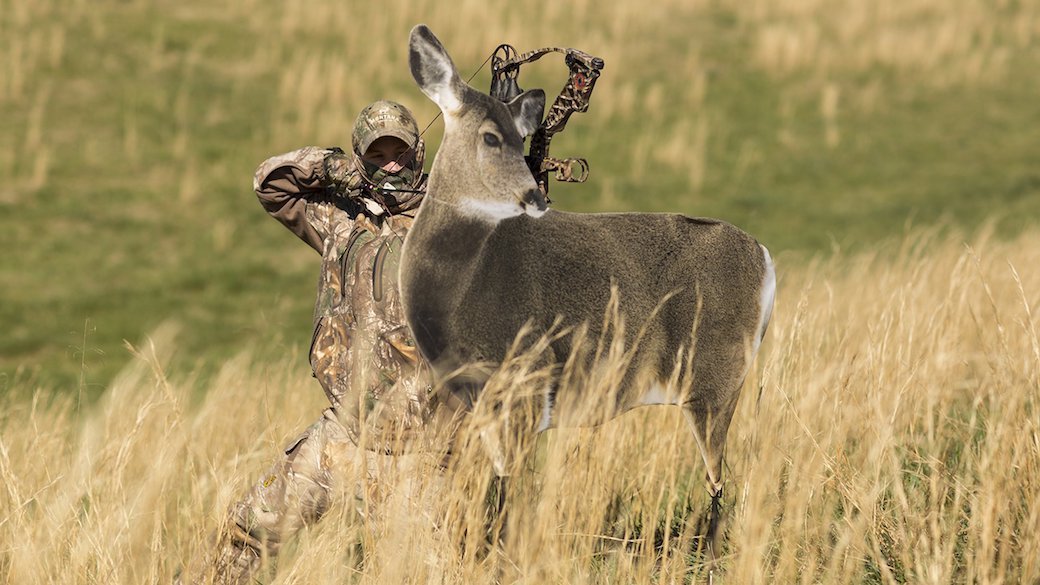 It might not look 100% realistic to you, but don't let that put you off. A buck in rut has a very different view of things!

A. Many hunters like one of each, a buck and a doe, the principle being that a buck will be interested in chasing off one and mating with the other, so for the hunter it's a win/win situation.

If you're just buying one deer decoy, a buck is the more popular choice. Does will attract bucks during the rut, of course, but they may also attract other does. Sometimes the ladies don't play well together, which can actually put a buck off.

A buck decoy is always a challenge to another buck, and the further into rut it gets, the more aggressive – and determined to have a confrontation – your target is going to seem.

Q. Do deer decoys always improve the chances of attracting a buck?

A. No. Though deer form social groups, most of the time it's for protection. Bucks of all ages will tolerate each other. In fact, deer are pretty good at ignoring each other most of the time. But all this changes when they’re in rut. Bucks are establishing their territory, gathering their does, and looking to mate. Other bucks are extremely unwelcome! Decoys are generally effective between early November and early December (though this might vary depending on the weather). Watch the deer. Their behavior will tell you when the action is starting. If you put out a deer decoy at other times, the only thing you might attract is a predator.

Q. Are deer decoys legal in all states?

A. No. Each state has its own laws for decoys and deer calls. For example, Tennessee allows both. Pennsylvania allows both as long as the call is not electronic. Rhode Island doesn't allow either. Never make assumptions. Always check before booking that hunting trip. 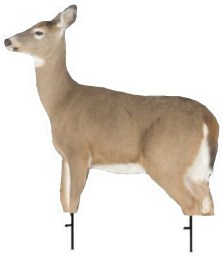 Best of the Best
Montana Decoy
Dreamy Doe Decoy
Bottom Line
This inexpensive option is both lightweight and easy to fold without sacrificing realism.
Shop Now 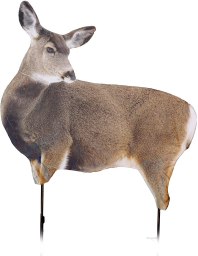 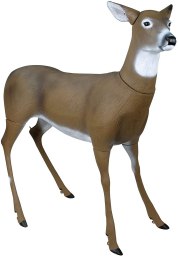 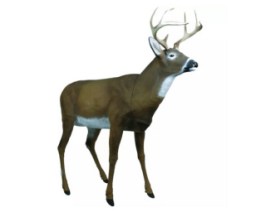 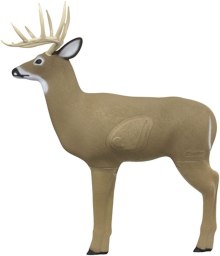 Top Pick
Field Logic
Big Shooter Buck 3D Archery Target
Bottom Line
If you are looking for a target decoy, this buck with a replaceable insert gives you a good shot.
Shop Now 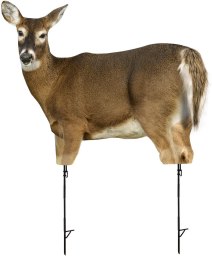 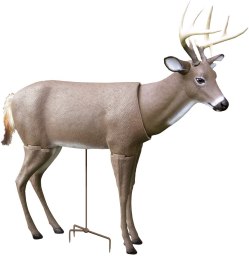 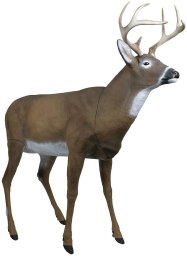 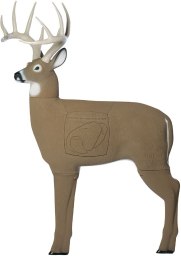