Features a thin yet durable build that doesn't take up a lot of storage space. Crafted of aluminum that defrosts food quickly and evenly. Works well for thick cuts of meat.

Can't be placed in the dishwasher, so you must wash it by hand. 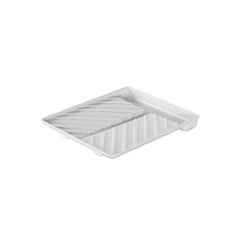 An affordable and effective design that doubles as a bacon cooker when placed in your microwave.

Versatile, as this tray can be used to defrost food as well as make bacon in the microwave. Sloped design keeps water, juices, and grease away from food as it works. Dishwasher safe; affordable price.

Made of plastic, so it's not as durable as some competitors. Somewhat large, so it won't fit well in smaller microwaves. 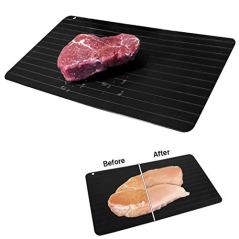 Inexpensive, no-frills option that will get the job done almost as well as pricier picks.

Not as solid as some competing models. 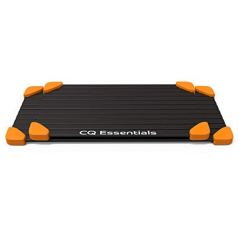 This pair is a must-have for anyone who barbecues on a regular basis. Easy to use and clean.

Not very speedy when it comes to thawing thicker foods. 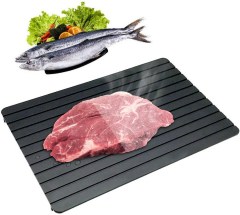 Made of sturdy aluminum alloy with a non-stick surface. Can be used for thawing different types of food. Available in 2 sizes. Easy to store.

It works, but it takes a little longer than anticipated to defrost some foods.

Nobody likes to get home from a long day of work and realize that you forgot to take the frozen steaks or chicken breasts out of the freezer to defrost for dinner. With a defrosting tray, you won’t have to order takeout the next time you make that mistake. Instead, you’ll be able to defrost any frozen food in about half the time it usually takes and then get dinner on the table as quickly as possible.

Choosing the right defrosting tray is key. That means deciding on the size, material, and other features that will work best for your food prep needs. 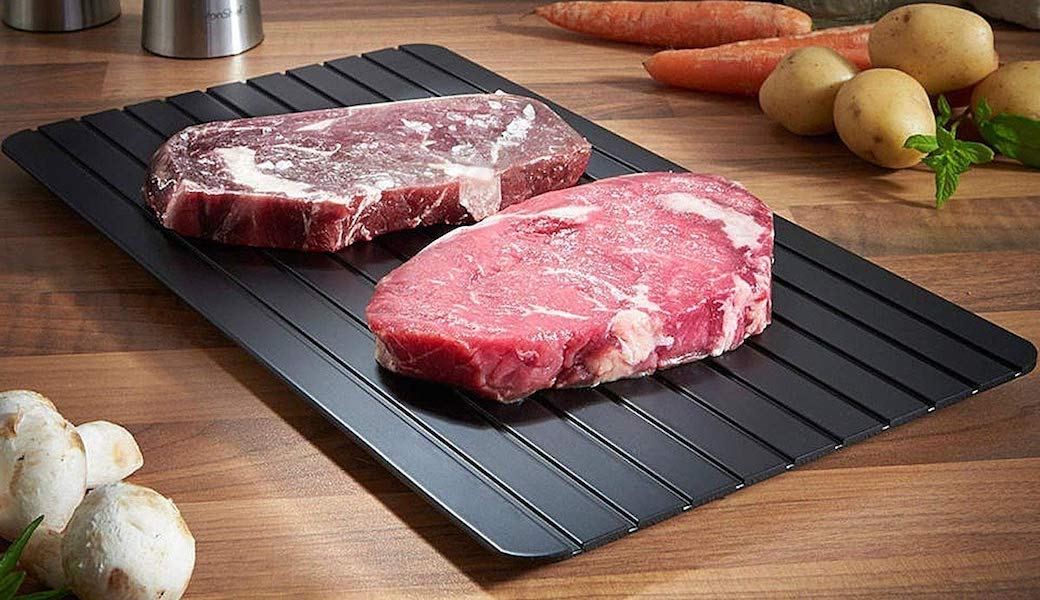 Benefits of using a defrosting tray

There are several benefits to having a defrosting tray in your kitchen:

Defrosts safely and quickly: In many cases, a defrosting tray can reduce the thawing time for frozen foods by half or more. At the same time, you don’t have to worry about bacteria developing because the United States Department of Agriculture (USDA) lists defrosting trays as a safe way to thaw food.

Thaws food uniformly: You don’t have to worry about some parts of your steak, chicken, or pork chop remaining frozen while other areas fully defrost because the tray helps all parts of the food thaw at the same rate.

Defrosts without using the microwave: While you can defrost food quickly in a microwave, some people are uncomfortable with the hazards posed by microwave use. A defrosting tray allows you to quickly thaw your food without turning on the microwave.

Stores easily: A defrosting tray is a fairly slim, flat tool, so you can easily find a spot for it in your cabinet. 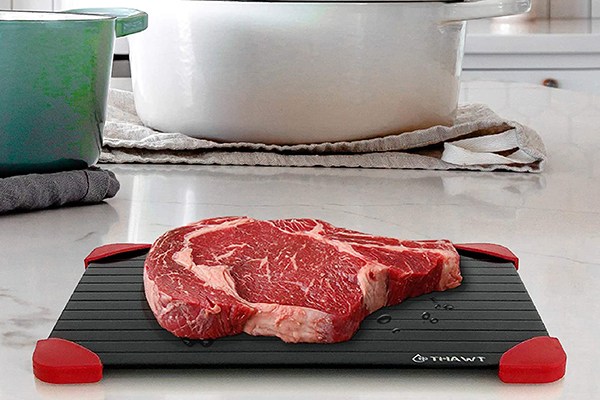 Defrosting trays come in a variety of sizes. When assessing products, we consider size and how much food a tray can hold at once. 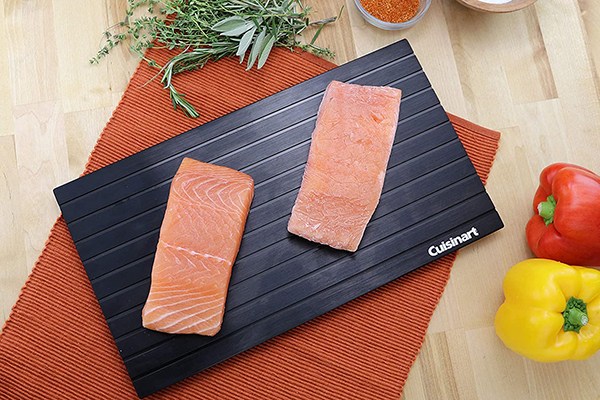 We consider options for a variety of budgets, from small, basic trays to large trays made with copper. 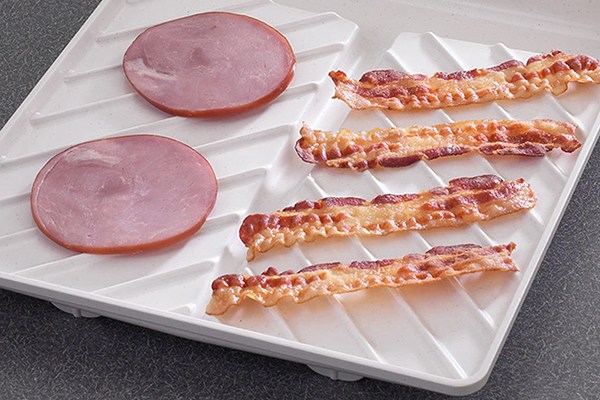 Some defrosting trays have a water reservoir to catch accumulated moisture. We note this feature when assessing a tray’s overall value. 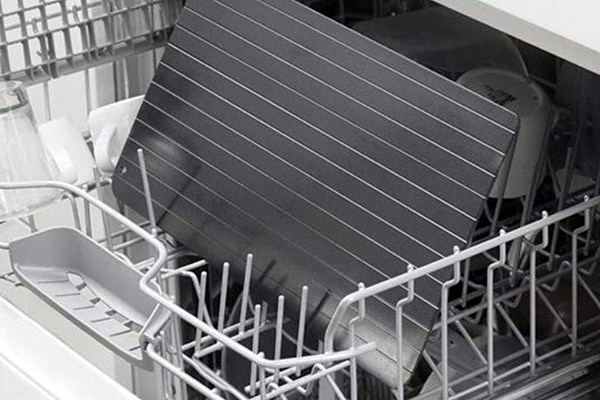 Some trays are dishwasher safe, which makes cleanup a breeze. Others have delicate surfaces that require hand washing. We look at ease of cleanup when evaluating products. 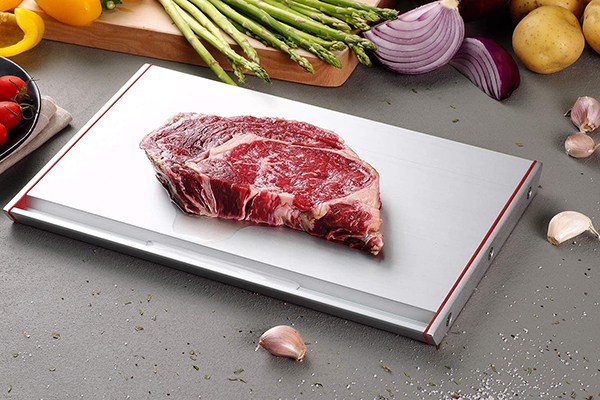 We look at the benefits and drawbacks of each tray’s material. For example, some aluminum trays have antimicrobial properties. Pricier trays are often made of copper, an efficient heat conductor. 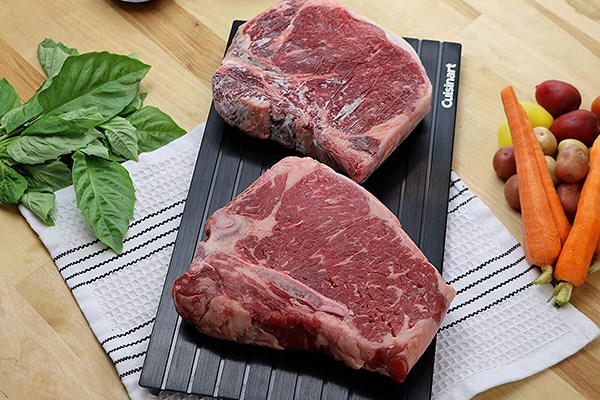 We research the effectiveness of nonstick defrosting trays. A nonstick surface can help prevent food from sticking as it thaws on the tray. 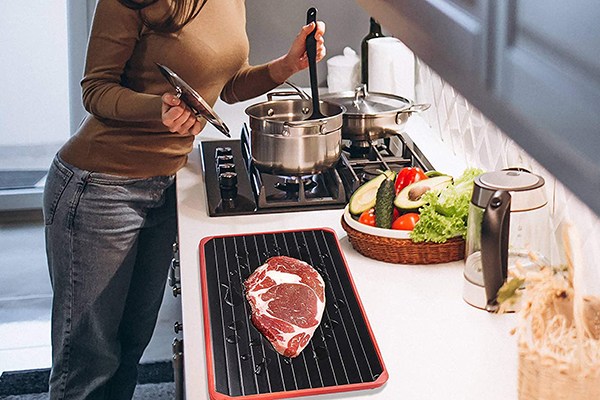 A defrosting tray should be made to last. Before recommending a tray, we research its quality and durability. 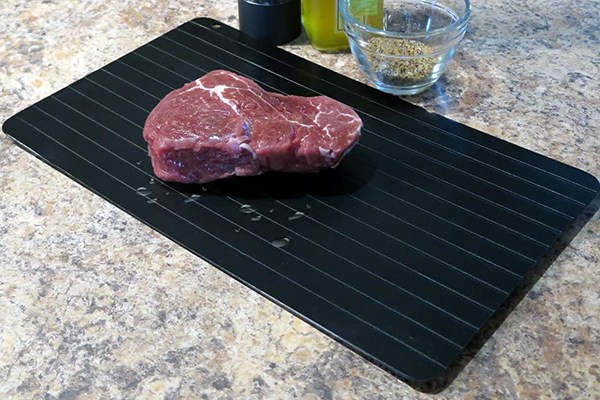 Efficiency is a crucial element. We find out how long a tray takes to thaw food of various sizes and thicknesses. 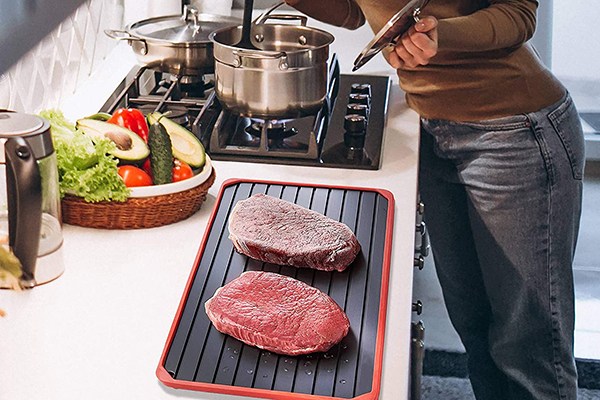 When it comes to kitchenware, brand is an important consideration for many consumers. We look at trays made by top brands in the industry, comparing their quality and functionality. 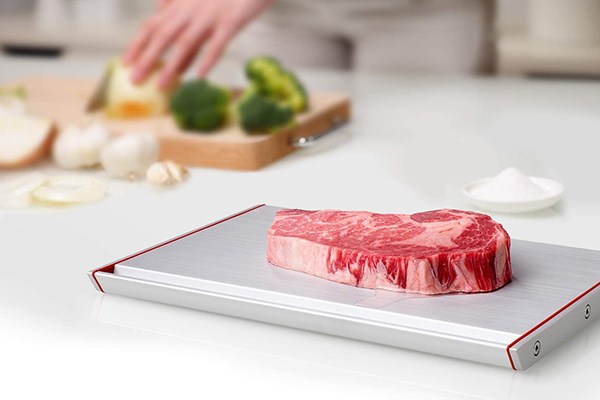 We look for defrosting trays that heat food uniformly, efficiently, and safely.

Size: Most defrosting trays are roughly the same size, approximately 11 inches by 8 inches, which is generally large enough to defrost two or three steaks. It’s a good option if you usually cook for one or two people. The largest defrosting trays are 14 inches by 8 inches, which is big enough to defrost three to five steaks, making it a better option if you have a larger family.

Material: Many defrosting trays are made of aluminum because it’s an effective and efficient conductor of heat. Aluminum is able to pull heat from the air and transfer it to the food, so food thaws eight to ten times faster than it normally would. For the quickest, safest thawing, choose a defrosting tray that’s made with antimicrobial, food-grade aluminum, or aluminum alloy.

Some higher-end defrosting trays are made of copper, which conducts heat even more effectively than aluminum. But copper scratches easily and is more difficult to clean, so it’s often coated with aluminum for easier maintenance.

Nonstick: When meat and other foods thaw, moisture (condensation) develops. Combined with the colder temperature of the food, it can cause the food to stick to the tray’s metal surface. This can make it difficult to remove the meat once it’s fully thawed. Many defrosting trays are treated with a nonstick coating to make it easier to remove your defrosted steak, chicken, or other food from the surface.

Water reservoir: As food thaws on a defrosting tray, it produces moisture that can quickly accumulate on the surface. The liquid can easily overflow off a flat tray and spread harmful bacteria across your kitchen counter, which must be carefully cleaned up. Some models feature a built-in water box to collect the water, so you can easily dispose of it once the food is fully thawed.

Maintenance: Some defrosting trays must be washed by hand, particularly those with a nonstick surface. That’s because the surface can be easily scratched in the dishwasher. But there are many models that are dishwasher safe. If you want a low-maintenance tray, make sure the tray you choose can go in the dishwasher.

Caution
Spoiled meat can’t be made safe by cooking. If your food has been in the danger zone between 40°F to 140°F for two hours or more, discard it immediately.
STAFF
BestReviews

Defrosting trays vary in price based on size and material. In general, you can expect to spend between $7 and $60.

Inexpensive: Small defrosting trays made of aluminum range from $7 to $15. 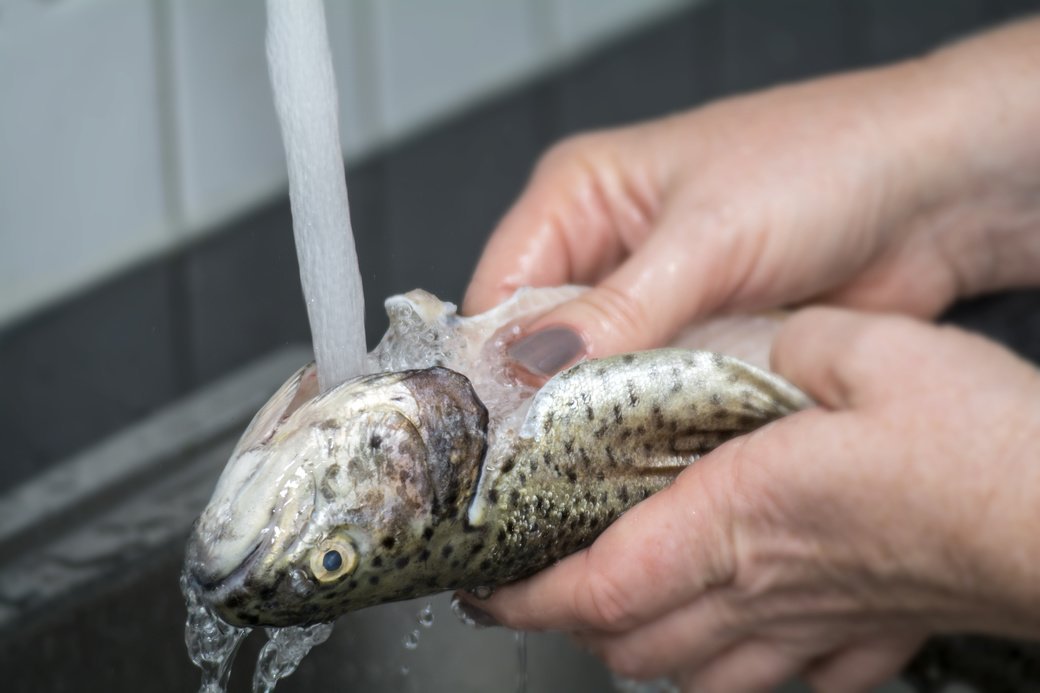 Cut down on defrosting time by rinsing frozen foods to remove any frost before placing them on the tray.

Q. Is it safe to use a defrosting tray to thaw meat?

A. If used properly, the USDA does recommend a defrosting tray as a safe method for thawing frozen meat. However, it’s important to remember that it isn’t safe to let meat stay in the dangerous temperature zone of 40°F to 140°F for more than two hours. While a defrosting tray can usually defrost a standard size piece of meat in that time, it might take longer for larger pieces, such as a whole chicken or a particularly thick steak. To be safe, those items should be defrosted using another method.

Q. Why is using a defrosting tray better than thawing food in the refrigerator?

A. Defrosting food in the refrigerator is an effective method, but it can take a great deal of time to thaw a piece of meat that way. That’s because the refrigerator increases the temperature of frozen food very gradually, so it might take a full day to defrost even smaller cuts of meat. With a defrosting tray, you can usually thaw food in 40 minutes to an hour and a half, drastically reducing your defrosting time.

Q. Can a defrosting tray double as a cutting board?

A. All defrosting trays are made of either aluminum or copper, which are relatively soft metals. Using a knife to cut on the tray could scratch and damage the surface and affect its performance. Use a dedicated cutting board to cut your meat once it’s defrosted. 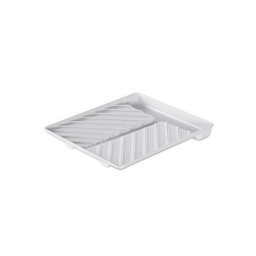 Best Bang for the Buck
Nordic Ware
Nordic Ware Microwave Bacon Tray and Food Defroster
Bottom Line
An affordable and effective design that doubles as a bacon cooker when placed in your microwave.
Shop Now 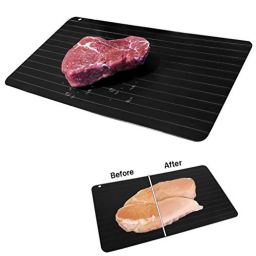 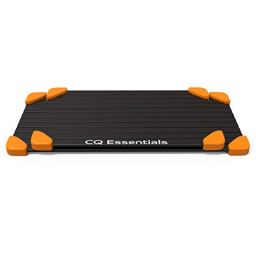 Top Pick
CQ Essentials
Defrosting Tray Set
Bottom Line
This pair is a must-have for anyone who barbecues on a regular basis. Easy to use and clean.
Shop Now 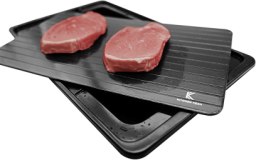 Top Pick
Kitchen Keen
Defrosting Tray with Drip Tray
Bottom Line
A quality defrosting tray that is effective at de-thawing food. Its performance makes it worth the extra effort of washing it by hand.
Shop Now 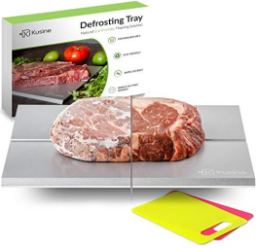 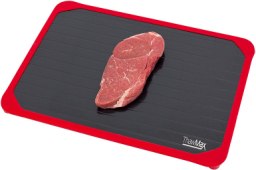 Top Pick
ThawMax
Rapid Defrosting Tray
Bottom Line
While it's not the fastest option, this model has user-friendly features that make up for the sluggish performance.
Shop Now 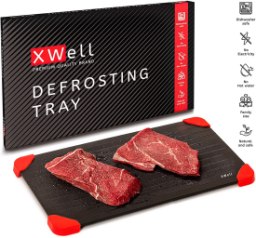 Top Pick
XWell
Defrosting Tray
Bottom Line
A defrosting tray with some practical features that does the job, but takes a little time for expected results.
Shop Now