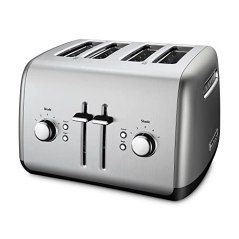 This is a streamlined model that boasts a light weight and user-friendly controls, according to our tests.

Dual controls to customize toast on each side. Handy bagel function. Crumb tray included. High-lift lever to inspect and easily remove toast. Sleek design blends in with stainless steel appliances. Was simple to clean in our user testing.

The exterior of the toaster can get hot. Not ideal for larger bread. 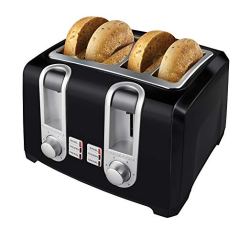 A super deal for larger families who like to customize toasting.

Appliance longevity is not as long as some owners would like. 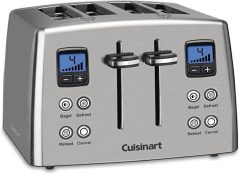 Based on our tests, this model is a nice balance between clever, forward-thinking ideas and intuitive operation.

Toaster is not cool to the touch. Can be inconsistent in cooking. 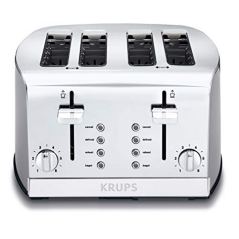 Delivers a customizable toasting that allows you to determine your shade level. 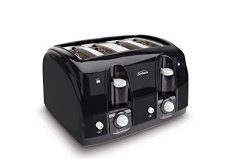 Lift feature helps prevent finger burns. Toasting can be canceled at the touch of a button. Slots adjust depending on the thickness of bread or bagel. Removable crumb tray and anti-jam feature for safety.

Does not toast as quickly as other models.

After going through an intensive research process to narrow down our short list of top products in this space, we tested most of our top five — including the KitchenAid KMT4115OB Toaster with Manual High-Lift Lever and  — to be sure that these products are worth your time. Guided by experts, we spend hours looking into the factors that matter and test to verify manufacturer claims.

Toasters have been an integral part of American kitchens for decades. They’re perfect for quick grab-and-go meals, and with the advent of four-slice toasters, you no longer have to stand around waiting for someone else’s toast to finish before you can start yours.

Many people think that all toasters are alike, but end up on the wrong side of too many burned slices, and you’ll know differently.

Finding a four-slice toaster that’s easy to use and gives you that perfect golden brown every time requires a bit of research.

The first thing to ask yourself is whether you actually need a four-slice toaster. You may want to consider it if you live in a large household and your toaster sees a lot of use. It can be a big timesaver because you make double the amount of toast at once, so there’s less waiting.

But if you’re the only one in your household and you don’t often make toast or frozen waffles, you’ll probably do fine with a standard two-slice toaster. Apart from being cheaper, these appliances also take up less space on your countertop. If you have a small kitchen with limited counter space, you might find that a two-slice toaster meets your needs.

Width: Toaster slot width is an important consideration if you plan to toast things other than slices of bread. Thicker items like bagels or Texas toast require wider slots. Trying to cram them into a narrow slot could result in the bread getting stuck down in the toaster. It also increases the likelihood of uneven browning. A standard toaster has a slot width of about 1.5 inches, which is enough to accommodate most bread and bagels.

Length: You might also want to pay attention to the length of the slots if you plan on toasting bread or pastries of odd shapes, but this is less crucial than width for most people. Slot length is usually around five to six inches, though there are a few elongated toasters with slots up to ten inches.

Auto shutoff: In rare cases, toasters have been known to cause house fires, so you want to make sure that the model you choose is equipped with automatic shutoff to prevent the toast from getting too hot.

Feet: It’s also a good idea to make sure that the toaster you choose is evenly balanced on sturdy, nonslip feet. You don’t want to worry about the toaster tipping over or sliding around when you use it.

Exterior temperature: The exterior of some stainless steel toasters can exceed 140°F while in use. Anyone with small children will want to pay attention to how hot the outside of the four-slice toaster gets during use. If potential burns are something you’re concerned about, choose an aluminum toaster instead. These models typically don’t reach dangerous exterior temperatures even when toasting several items in a row.

Toasters used to be pretty simple devices with a single dial setting and a manual lever for raising or lowering the toast. Modern technology is making some changes that users who are accustomed to the old-fashioned way may not like but those who are all for ease and convenience may love. Some of the new improvements could be worth paying a little extra for.

Toast-lift mechanism: Some four-slice toasters have replaced the standard lever with an automatic spring-loaded mechanism. While this may help the toaster fit better in a sleek, modern kitchen, it doesn’t offer any real functional improvements. In fact, some users find it more of a hassle because it’s harder to get stuck bread out of the toaster. You also can’t lift the baskets up that extra half inch to help you get the bread out without burning your fingers.

Timer: High-end toasters now include digital timers to enable you to more accurately track how much longer your bread will be toasting. Once you’ve found a setting that you like, it’s easy to return to it again and again without guessing.

Cleaning: Another factor to consider when looking at ease of use is ease of cleaning. The best models have a removable crumb tray that you can empty out periodically to prevent them from building up in the bottom of the toaster and burning.

Advanced controls: Most modern four-slice toasters come with multiple settings to accommodate different types of items. Here are a few controls you may want to look for as you shop.

One of the most important considerations with any household appliance is durability. Unfortunately, this isn’t information you’re going to find listed on the product label. But you can look for a model that comes with a warranty. That way, if it breaks down shortly after you purchase it, you won’t have to spend any money for repairs.

It’s also a good idea to check out the customer reviews on the models you’re considering. A high percentage of bad reviews is a good indication that a particular model isn’t going to last very long.

Mid-range: You can buy a four-slice toaster for less than $30, but we recommend spending between $40 and $60 if you want a quality unit that will last a long time.

Expensive: If you’re interested in a toaster with advanced features like a digital timer or defrost settings, it might be worth spending between $60 and $100. But make sure that the extra features you’re looking at are ones that you’re actually going to use.

Premium: Some high-end toasters can cost from $100 to $500 and more, but you probably won’t gain anything worthwhile by spending all that extra money. You’re likely to find leverless toasters in this price range, but as mentioned above, not everyone enjoys this new feature. 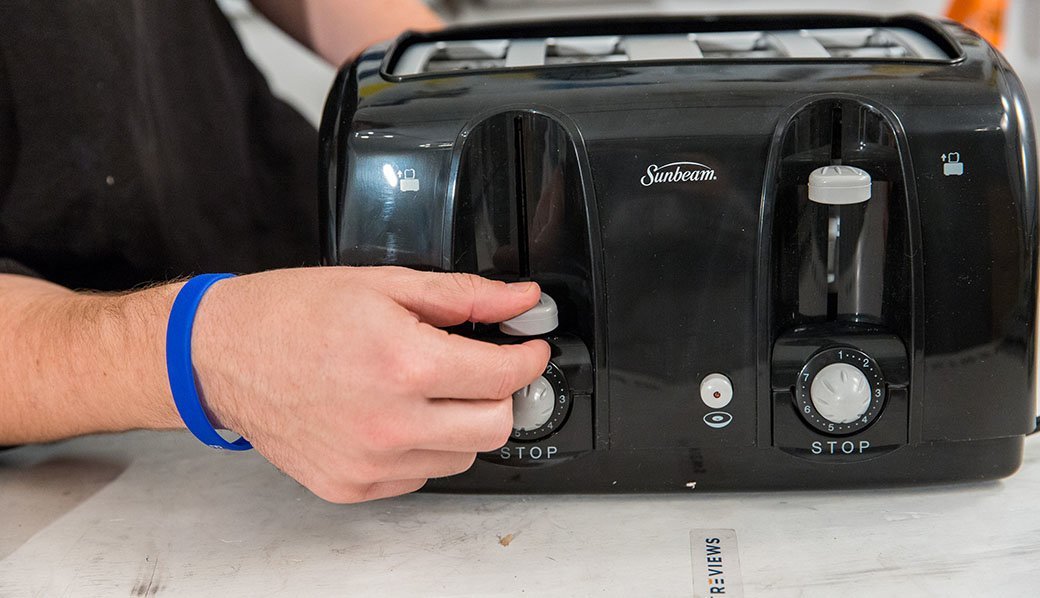 Most four-slice toasters have two separate sets of controls so you can toast bread on different settings at the same time.

A. There could be many reasons for this. It could be that you’re trying to cram a thick piece of bread into a slot that’s too small for it and the bread isn’t centered inside the toaster. The unit you chose may have few heating wires, which is more likely to result in uneven toasting. Or it could also be a sign that your toaster needs cleaning.

Q. Which slot should I use when toasting one slice of bread?
A. Most modern toasters don’t require you to use any specific slot when you’re only toasting a single slice of bread. Use whichever one you prefer.

Q. Do I need a toaster with a Defrost setting if I’m toasting frozen items?

A. You don’t need it, but it may produce a more even result. Look at the price difference between toasters with this setting and without. Decide if any extra expense is worth it to you based on how often you plan to use this setting. 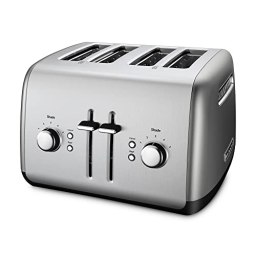 Best of the Best
KitchenAid
KMT4115OB Toaster with Manual High-Lift Lever
Bottom Line
This is a streamlined model that boasts a light weight and user-friendly controls, according to our tests.
Shop Now 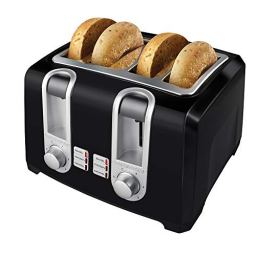 Best Bang for the Buck
BLACK+DECKER
4-Slice Toaster
Bottom Line
A super deal for larger families who like to customize toasting.
Shop Now 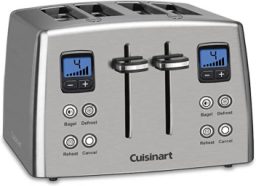 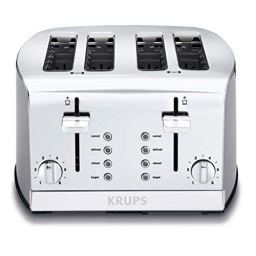 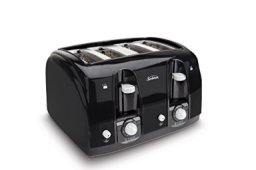 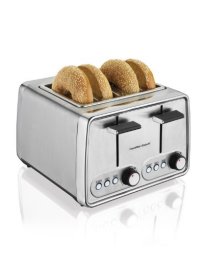 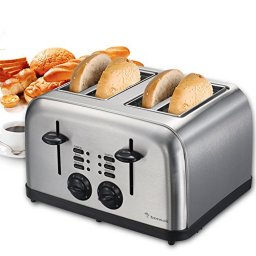