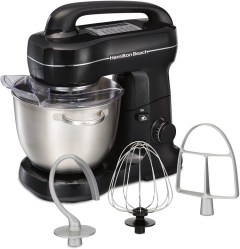 Smaller-capacity bowl can only handle single batches of cookie or cake batter. Mixer may rock a bit on the counter after it’s been in use for a while. 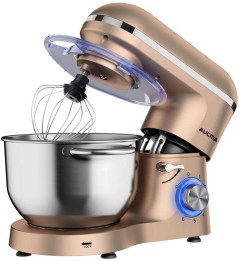 For those who want all the pro functions but can compromise some design choices for a bargain price.

Larger capacity than most competing models at comparable prices. It offers over half a dozen colors to choose from. Includes 3 accessories for different types of mixing and also a splash guard with hand access, so ingredients can be easily added in without making a mess.

Might be too fast even at the lowest setting. Attachments aren't dishwasher-safe. Plastic body. 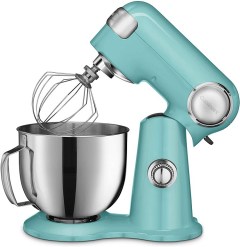 Offers 12 speeds for more precise mixing. Comes in 6 beautiful colors to match your kitchen decor. Beautifully designed and made of 100% metal. The tilted head is great for usability. Comes with 3 different attachments and a splash guard, which are all dishwasher-safe.

Not common, but some buyers have complained about the motor dying after little use. 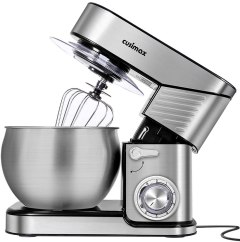 Easy to use and affordable without compromising anything essential.

If you don't care about looks and just need a good mixer for personal use, this is the one for you. The suction cups on the base help keep it in place, and it has good vents to prevent too much overheating. It's more compact and portable than other stand mixers.

Should be used in 7-minute intervals. Made of plastic and not dishwasher-safe. Moves while in use. 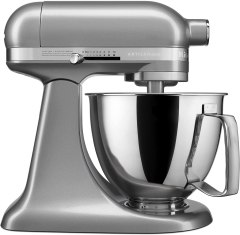 Although a little pricey, our expert notes this is the least expensive model from the definitive maker of stand mixers.

Any serious home baker knows that life in the kitchen is better with a stand mixer. Preparing cake batter, cookie batter, and even bread dough with a stand mixer is so much easier than muscling through it by hand. If you haven’t yet invested in a stand mixer because of the price, we’ve got good news: there are plenty of excellent budget stand mixers that fit the bill.

A stand mixer is a powerful stationary appliance that can mix batter, whip cream, and knead dough quickly and easily. It consists of a mixing arm that holds attachments like a flat beater, whisk, or dough hook and a separate bowl that locks in place during mixing. However, most stand mixers are pricey, and that discourages some home bakers from buying one.

A budget stand mixer may have a slightly smaller bowl and fewer speeds than a pricier model, but it can make your work much easier in the kitchen. We created this buying guide to help you determine what you need in a budget stand mixer in terms of size, weight, power, and features. 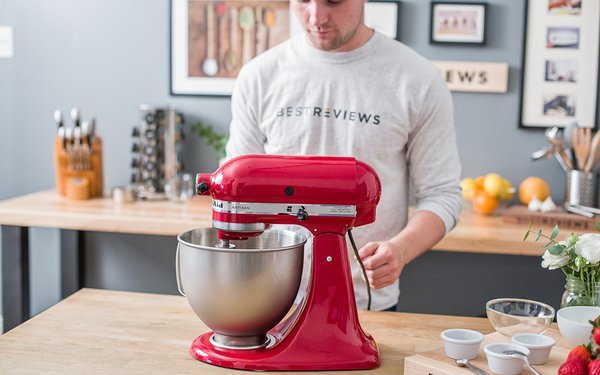 If you have arthritis or diminished hand and arm strength, a stand mixer is an excellent option because it does the work for you.

When choosing a budget stand mixer, you certainly don’t want to skimp on power. A stand mixer with a stronger motor can handle thicker, heavier batters. We recommend that you buy the most powerful stand mixer that fits your budget.

Stand mixer motor power is usually measured in watts. For the most efficient mixing, choose a budget model that offers at least 300 watts.

Nearly all stand mixers are bulky and heavy; the mixer must weigh enough to withstand the force generated when mixing at high speed. Many stand mixers weigh 12 to 20 pounds; budget mixers are often on the lighter side.

Think, too, about how much space you have in your kitchen. If you plan to leave the mixer out on the counter, measure the spot where you’ll keep it. If you plan to keep it on a shelf or in a cabinet, you’ll want to be certain it’s not too heavy to lift out of storage.

Expert TIp
On lighter mixers, like ones made with a majority of plastic parts, look for suction cup feet. These help keep a light mixer from “walking” itself off the countertop.
Andrea Boudewijn
BestReviews Cooking and Baking Expert

Choose a stand mixer with a bowl that’s large enough for the recipes you usually prepare. Note that budget models tend to have smaller bowls, so you may need to mix in batches.

In general, budget stand mixer bowls hold between 3 and 6 quarts. For most mixing tasks, a 4- to 5-quart bowl is large enough. However, if you like to make larger batches of cookies, brownies, or other baked goods, you may want to opt for a 6-quart model.

Stand mixers use one of two mixing styles: planetary or stationary.

Planetary stand mixers have a single beater that spins as it rotates through the bowl. This provides the most consistent mixing because more contact occurs between beater and mixture.

Stationary stand mixers feature two stationary beaters that spin as the bowl rotates. While these models suffice for thinner batters and lighter mixing jobs, the mix isn’t as consistent as what you’d get from a planetary mixer.

Many budget stand mixers feature stationary mixing, but you can also find affordable planetary models if you don’t mind a smaller bowl. 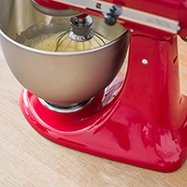 Did You Know?
Some stand mixers feature a splash guard that helps keep the ingredients in the bowl while mixing to prevent a mess.
Staff
BestReviews

Most budget stand mixers feature dial or lever controls, but a few incorporate touch controls. Both types are relatively easy to use, but touch buttons are more user-friendly, and it can be difficult to clean dials and levers if batter splashes on them.

Even budget stand mixers offer variable speeds so you can tailor your speed to your mixing job. Budget stand mixers typically offer between 3 and 12 speeds. The greater the number of speeds, the more choice and precision you have.

Nearly all budget stand mixers come with multiple mixing attachments for greater versatility. You can usually expect three attachments: a flat beater or paddle, a whisk, and a dough hook. A flat beater works well for most cookie and cake batters, while a whisk is ideal for whipping cream or egg whites. A dough hook is essential if you frequently make bread or other recipes with thick, heavy dough.

Despite their affordability, budget stand mixers are usually available in a variety of colors. White, black, and silver are the most common, but you can also find models in vibrant shades like red, aqua, cobalt, and pink.

Expert TIp
Check that the mixer you pick has the attachments you need. If you’re making tough doughs frequently, two small corkscrew dough hooks won’t have the power to knead your dough.
Andrea Boudewijn
BestReviews Cooking and Baking Expert

Bakeware set: Calphalon 10-Piece Bakeware Set
If you make cakes, cupcakes, or brownies, bakeware is essential. This set from Calphalon is a favorite because of its even heat distribution and nonstick finish.

Baking sheet set: Rachael Ray Oven Lovin’ 3-Piece Nonstick Pan Set
You’ll need a high-quality baking sheet set to bake all those cookies and other treats you mix up in your stand mixer. We love this set from Rachael Ray because it includes three different sizes and is oven-safe up to 450°F.

Budget stand mixers vary in price based on size, power, mixing type, speed options, and other features. Expect to spend $50 to $200. (Note that high-end stand mixers can cost up to $500.)

The most affordable budget stand mixers typically offer 300 watts or less of power, five or fewer speeds, and often, stationary mixing. Bowl capacity is usually 4.5 quarts or less. Expect to pay between $50 and $80 for a stand mixer like this.

Mid-range budget stand mixers typically exude between 300 and 500 watts of power, five or more speeds, and a 4-quart or 5-quart bowl with planetary mixing action. Expect to pay between $80 and $120 for a stand mixer like this.

For $120 to $200 or more, you can get a stand mixer that’s pretty great but still doesn’t cost as much as those on the very high end. Stand mixers in this price range may have a capacity of 4.5 to 6 quarts and employ planetary mixing action. Most have at least six speeds; some have as many as twelve. 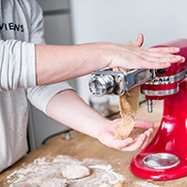 Expert Tip
Think about how you’ll store your mixer: On the countertop or in a cabinet? Make sure you have room for it and that you can move it around as easily as you need to.
Andrea Boudewijn
BestReviews Cooking and Baking Expert 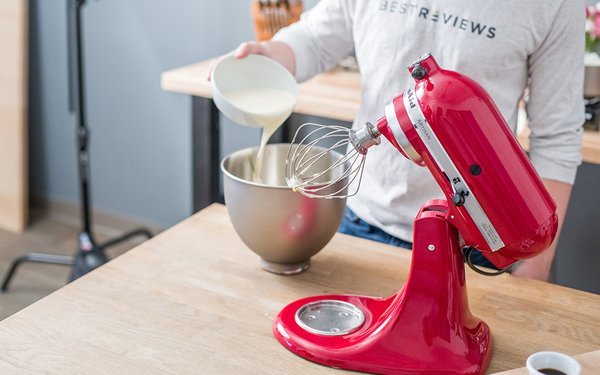 While a hand mixer may suffice for occasional bakers, a stand mixer is an excellent investment for someone who bakes regularly.

Q. What can I use a stand mixer for?

A. Stand mixers are commonly used to prepare cookie dough and cake batter, bread dough, whipped cream, and frosting. You can also use a stand mixer for savory recipes, such as mixing meat and seasoning for meatballs or shredding cooked meat for pulled pork or chicken.

Q. How long will a budget stand mixer last?

A. It depends on a variety of factors including brand, model, and how often you use it. In most cases, even the most affordable stand mixers will perform for a minimum of three to four years without issue.

Q. How should I clean my stand mixer?

A. Some stand mixers feature dishwasher-safe components: simply place the bowl and attachments in the dishwasher for cleaning. However, if your stand mixer calls for handwashing, use warm, soapy water to clean these parts. To clean the exterior of the mixer, use a damp cloth. An old toothbrush can be handy for cleaning small crevices you couldn’t otherwise reach. 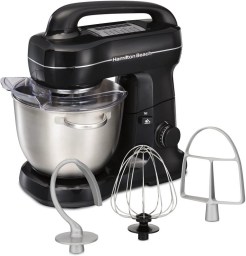 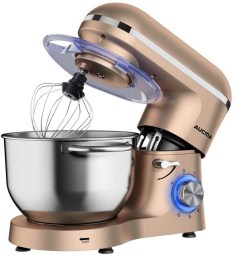 Best Bang for the Buck
Aucma
6.5 QT Stand Mixer
Bottom Line
For those who want all the pro functions but can compromise some design choices for a bargain price.
Shop Now 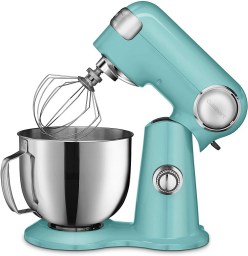 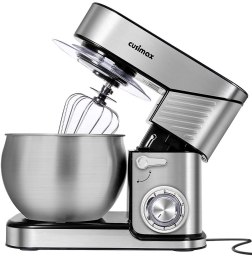 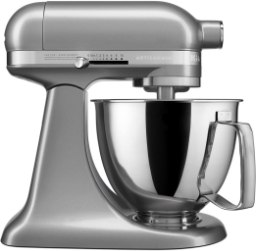 Top Pick
Aifeel
4.3 QT Retro
Bottom Line
Great functionality overall. It does all you need it to, but you are sacrificing some durability for money savings.
Shop Now 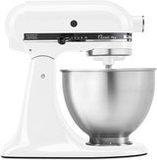 Top Pick
KitchenAid
Classic Plus
Bottom Line
This brand is the Rolls Royce of stand mixers because of durability, features, and design. When you find it at a great price, do not hesitate.
Shop Now