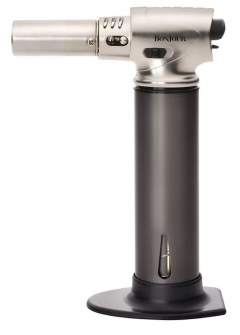 Our culinary expert's personal favorite; a workhorse cooking torch for finishing classic dishes and fits into any professional kitchen.

A bit more expensive than other picks. Needs refilling. 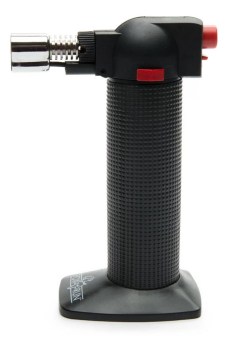 A tool that our culinary expert likes for its easy-to-grip handle, high capacity, and great price point.

Needs to be refilled by hand. Fuel capacity not very large. 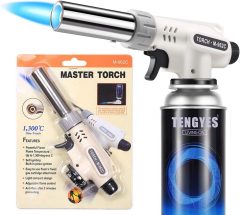 Our culinary expert enjoys this torch's ability to attach to any standard can of butane and its good, strong flame.

Adjustable flame strengths and sizes. Reaches up to 2,500 degrees F. Easy to ignite with a button press. Cumulatively lasts up to 2 hours of flame on a single 8-ounce can of butane. Fits any standard fuel source.

Butane can not included. Ignition may take a few presses. 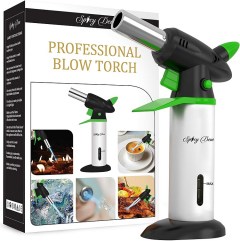 A lightweight option with easy flame adjustment to give you just as much heat as you need.

Features a child safety lock. Adjustable flame knob. High quality at a price that will fit into any budget. Easy to use and refill. Lightweight and comfortable to hold.

Some of these torches have had issues with the butane leaking out due to user error. 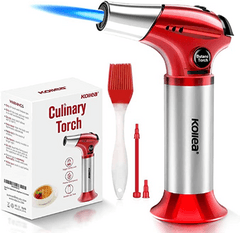 This mini option, which comes with 2 tools, is a popular choice for crème brulée lovers.

Heats to 2,500 degrees F. Holds 10 grams—about 2 teaspoons—of butane gas and is easy to refill. Torch can be used for baking, sous vide, searing meat, and even soldering jewelry.

Unit is predominantly made of plastic, not metal.

The cooking torch: no other culinary tool lends itself so well to fantasies of competing on Top Chef while also combining the intricacies of kitchen chemistry with the fun of turning out scrumptious desserts for family and friends.

It’s a tool that is unfamiliar to most cooks, however, and choosing a cooking torch can feel somewhat like solving a mystery.

How do you know which type is best for your needs?

With different brands of cooking torches available, which features should you look for?

And if you’ve never used – maybe never even heard of – a cooking torch before, what can it do for you? 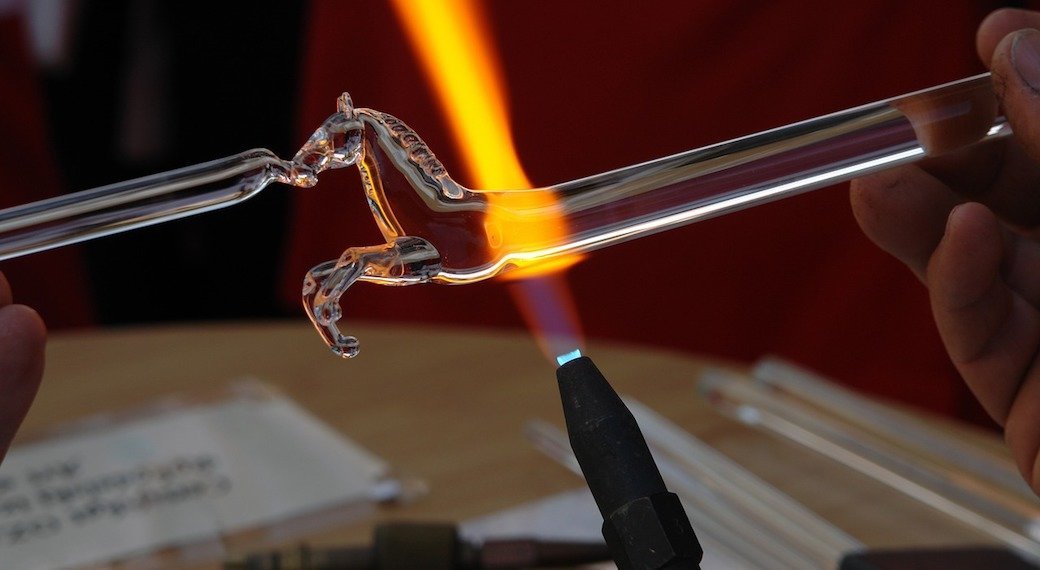 Your cooking torch is useful outside the kitchen as well. You can use it for soldering, woodworking, leather crafting, wax working, and jewelry repairs.

What is a cooking torch, and why would you want to use one?

If you’re puzzling over how a torch is used in a kitchen, take heart; a cooking torch – also called a culinary torch or kitchen torch – isn’t the flamethrower the word brings to mind. Rather, a cooking torch is a handheld device that uses butane (a highly flammable gas) to create a small, focused, very hot flame.

The most notable use of a cooking torch is the preparation of crème brulee, but it’s useful for quite a few tasks beyond the crunchy-on-top, creamy-underneath dessert. In fact, your culinary torch could come in handy in a wide range of situations where you want to melt, sear, caramelize, or toast ingredients without cooking or heating the entire dish. You could use a cooking torch to do any of the following. 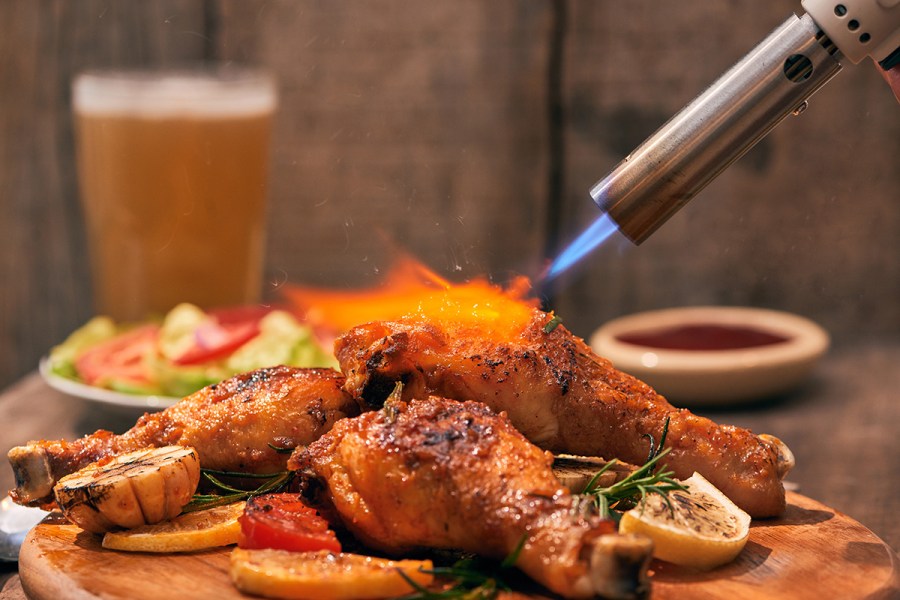 Certain torches screw directly onto a propane tank. We weigh the pros and cons of these options, as well as how they perform under regular use. 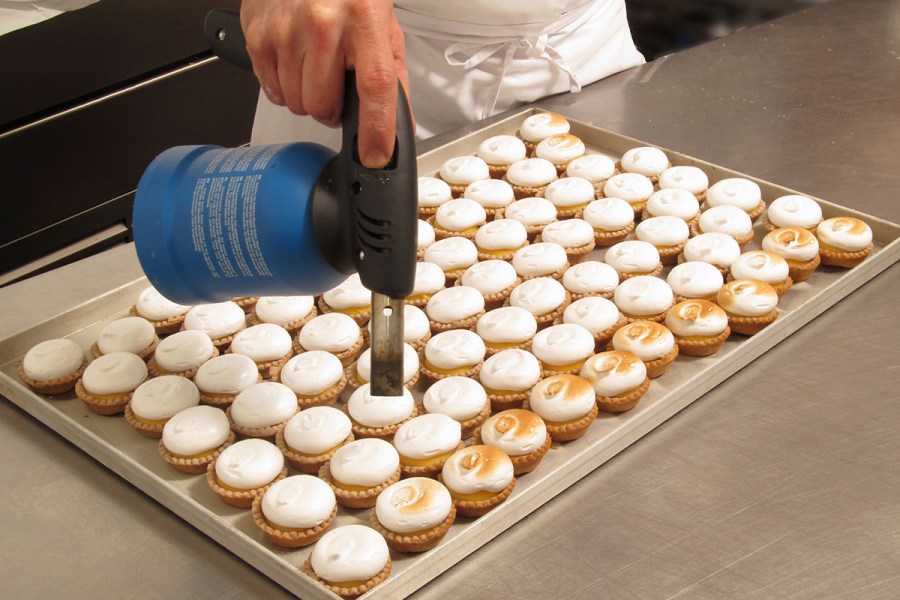 Most cooking torches come with a built-in tank that allows them to be quick and efficient to use. We assess how well these options work for a majority of chefs. 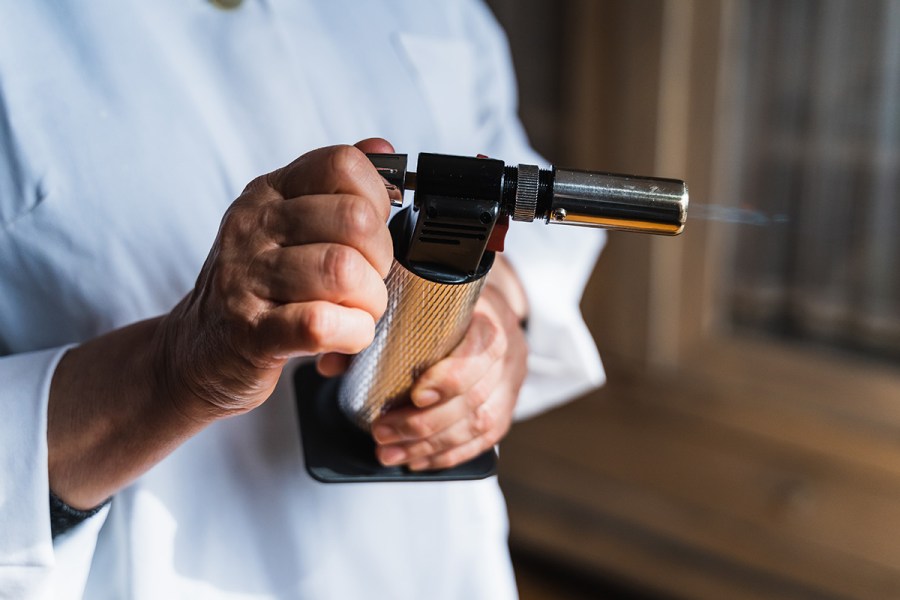 The size of a cooking torch tank will make or break how long it can be used before having to be replaced or refilled. We research the capacity of each product we consider. 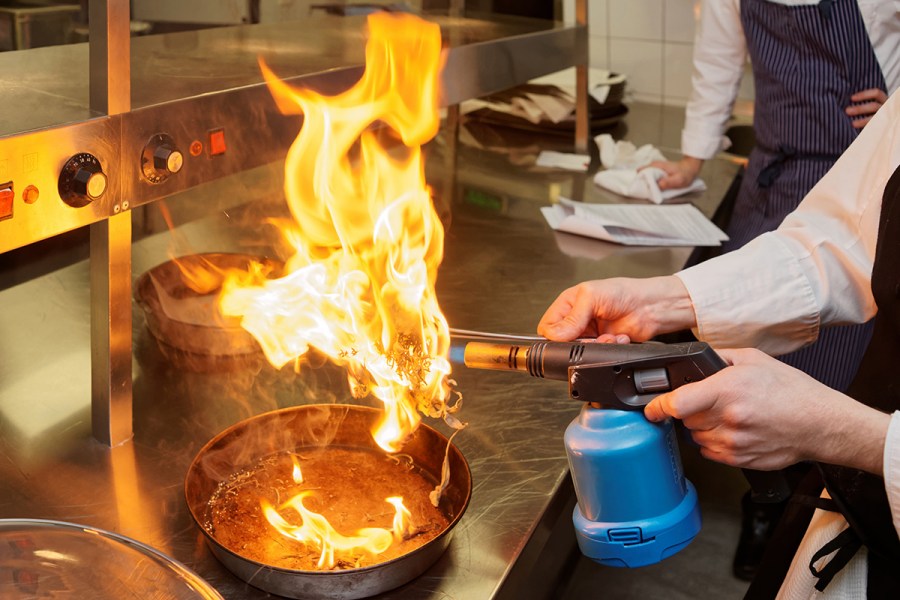 Most cooking torches will have a mechanism on the side to adjust the flame size. We investigate how easy it is to lower the flame during use. 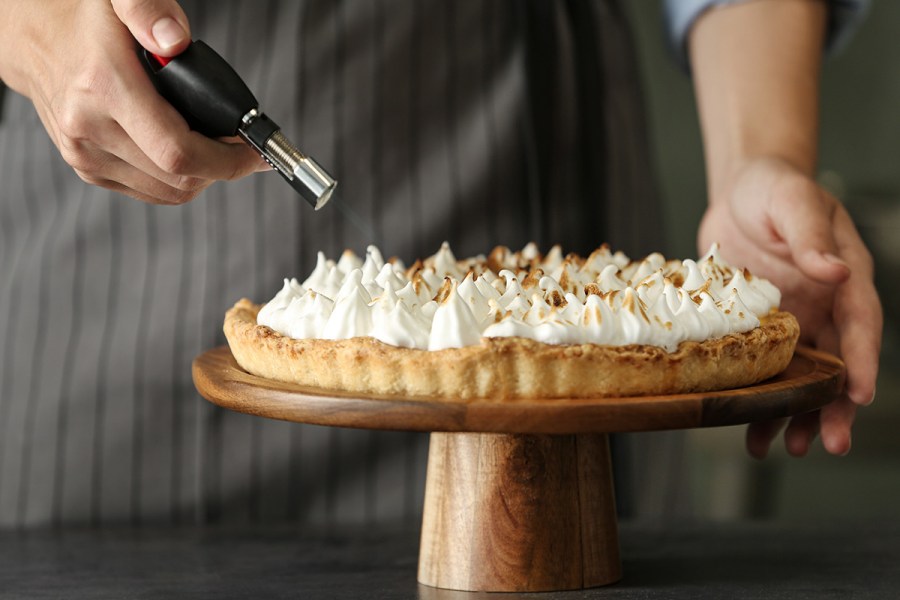 Some at-home torches have less capacity than those professional chefs use, but they are often lighter, which is something that we consider. 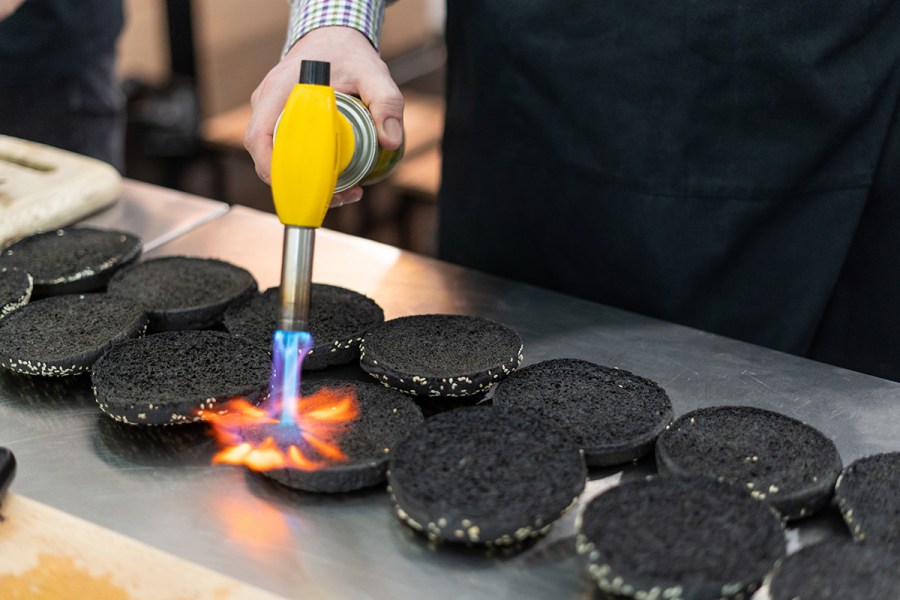 The power of a cooking torch can make or break how versatile it is in the kitchen. We look for options that are powerful enough for a wide range of recipes. 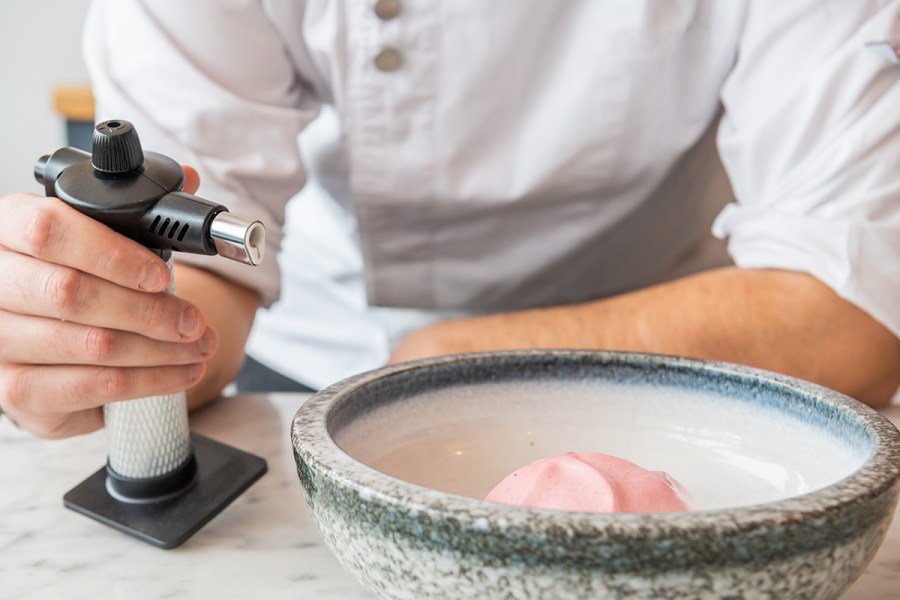 The mechanism for lighting the cooking torch will either be a trigger or a knob on the back. We weigh the advantages and drawbacks of each to determine whether it’s worthy of a place on our list. 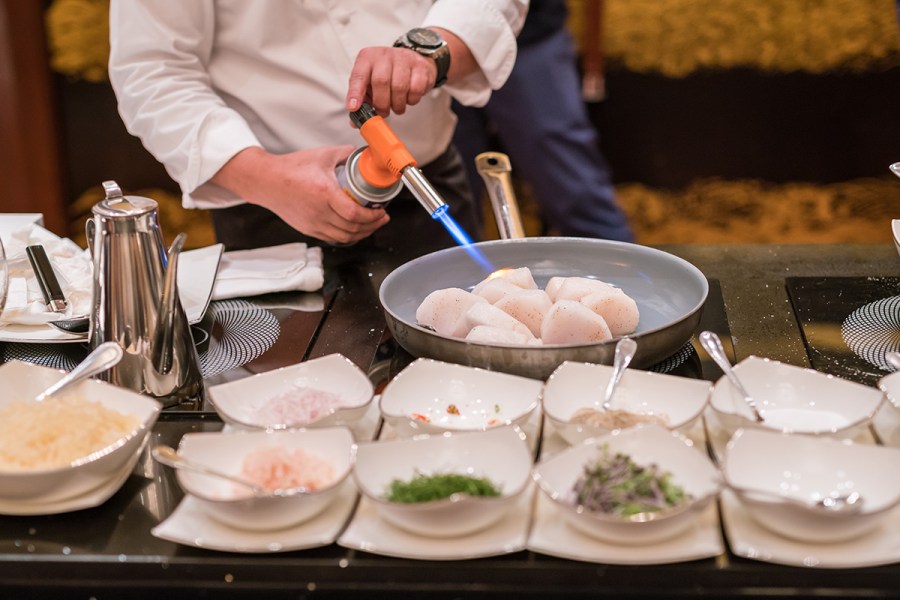 The weight of a torch-head cooking torch will vary based on what size propane tank you use. This is something we consider when looking for the right products to recommend. 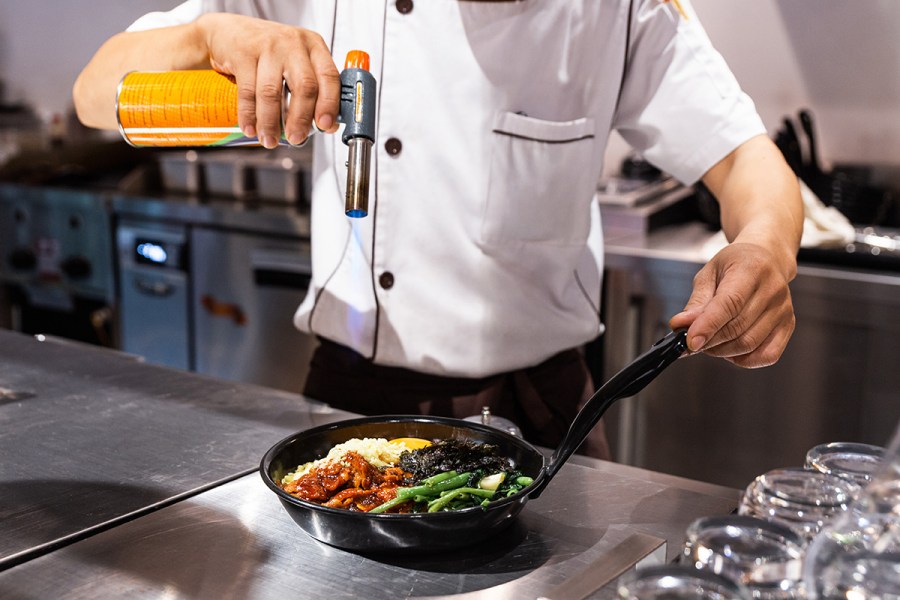 Torch-head cooking torches are often utilized because they are easy to put onto the tank itself without losing fuel. We investigate how simple it is to install the head on the propane tank. 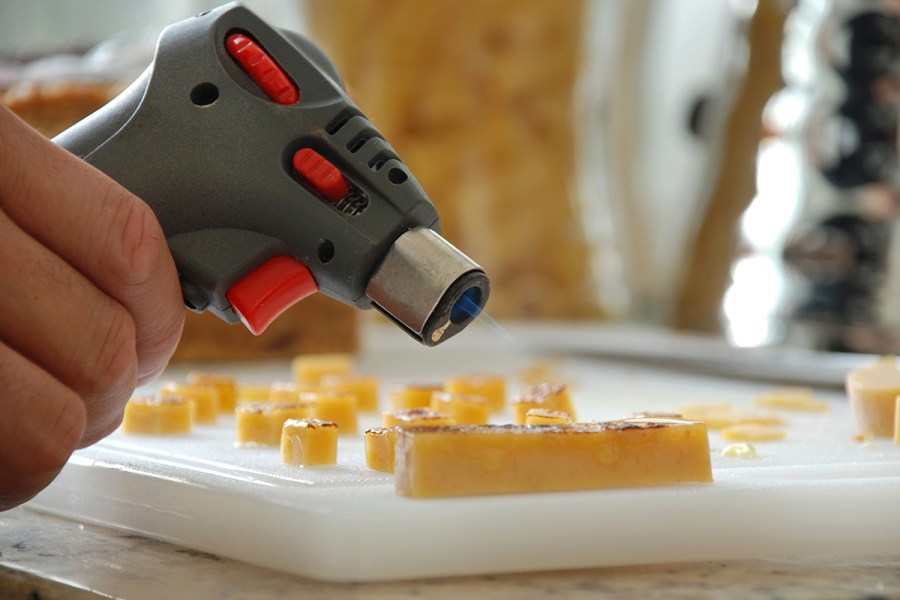 The size of a cooking torch may determine how far the flame projects. We research whether smaller torches still provide enough flame for daily use.

While their function is the same, you’ll find two basic types of cooking torches: those that have a built-in fuel tank and those that screw onto the top of a disposable fuel tank. Both have their pros and cons, although in general, the screw-on torch-head devices are more powerful and have longer run times.

Torch-head cooking torches screw directly on to a butane tank as opposed to having a handle that encloses a small, refillable fuel tank.

Expert Tip
If you’re caramelizing the sugar on top of a Creme Brulee, aim to avoid any black spots. The perfect brulee (“burn”) is evenly caramelized to a warm nutty brown color -- never fully taken to black. It only takes a second to go from no color to black, so watch it closely.
Andrea Boudewijn
BestReviews Cooking and Baking Expert

Cooking torches with built-in fuel tanks are an all-in-one design. The head attaches right to the base, which encloses the inner fuel tank. 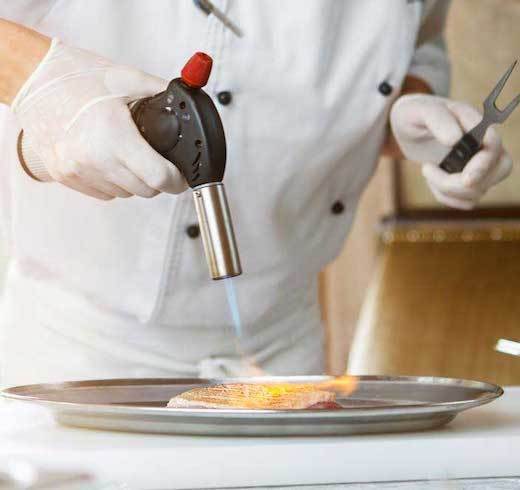 EXPERT TIP
An easily-adjusted continuous flame is key. Consider how you want to use a torch (for quick intense heat or even toasting over time), and choose the torch with the flame control most applicable to your cooking style.
Andrea Boudewijn
BestReviews Cooking and Baking Expert

You don’t have to spend a lot to get a good cooking torch.

For $15 to $20, you can get an adequate torch with a fairly small fuel tank. If you only plan on using the torch for the occasional crème brulee or similar desserts, this should suffice.

EXPERT TIP
While using the torch with its stand, turn the flame OFF whenever you set it down to avoid burning yourself or items around you. Even if the flame is off, some metallic surfaces on torches can remain hot, so stay alert.
Andrea Boudewijn
BestReviews Cooking and Baking Expert

The $20 to $30 range is the sweet spot for most buyers. For this price, you can get a cooking torch with a good-size fuel tank and most of the desirable features.

For $30 and up, you can get a professional-quality cooking torch with a large fuel tank. If you use a cooking torch extensively, or if you simply prefer the best, consider models in this price range.

Beginners can find torches a little intimidating to use, so take your time with lighting and adjusting the flame. Start with a smooth sweeping motion a few inches from your target to figure out how large your flame should be and the best distance at which to use it.

There are a few features that elevate the best culinary torches above the rest of the pack. Here are some to look for: 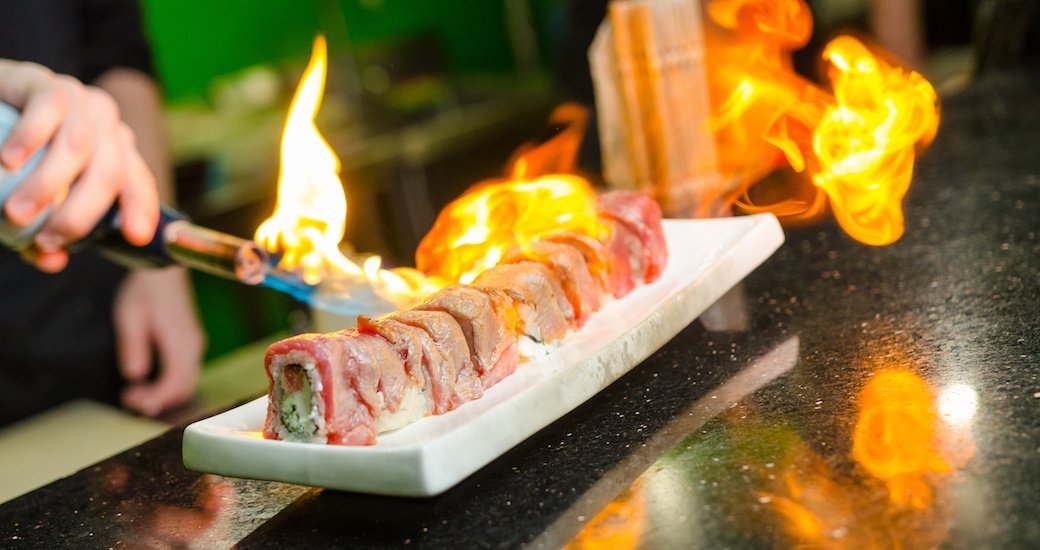 Once you really have a feel for your kitchen torch, you’ll likely be inspired to hunt down more recipes that put it to good use.

Q. Do I have to keep my finger pressed down on the trigger the whole time I’m using a cooking torch?

A. It depends on the torch. With some less-expensive models, yes, you’ll need to hold your finger on the trigger to keep the flame coming. With others, there’s a lock that keeps the flame on even if you set the torch down. If you plan to use the torch for lengthy sessions or on a regular basis, it’s worth spending a bit more for a torch with an “on” button.

Q. Do I have to buy special fuel to refill my cooking torch?

A. The majority of cooking torches use butane as fuel, although some run on propane. Generally, you do not need any special butane to refill your torch, but a few brands do require their own specific refill canisters. Before choosing a torch-head-style cooking torch, determine what replacement fuel canisters it uses.

A. While any device that emits flames can be dangerous, if you follow basic safety precautions and remain alert, it’s quite safe to use a cooking torch. Of course, you should never use the torch near flammable items, nor should you leave it unattended while switched on. And don’t let children handle the cooking torch, even if it’s turned off.

Q. Do I need to light a cooking torch with a match or outside flame?

A. Almost all culinary torches have piezoelectric ignition, which is the same type of automatic lighter found in gas grills or stovetops. Generally, you just press the ignition button to fire up your cooking torch. 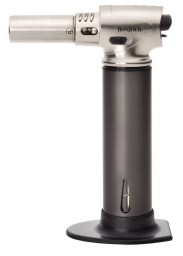 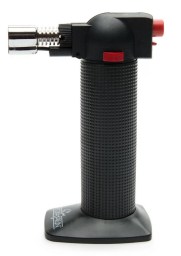 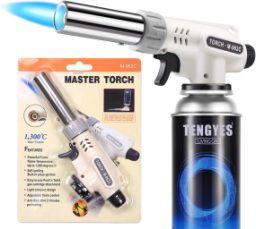 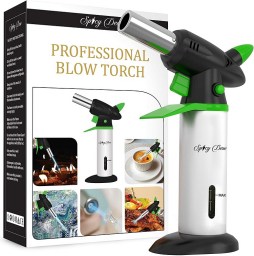 Top Pick
Spicy Dew
Blow Torch
Bottom Line
A lightweight option with easy flame adjustment to give you just as much heat as you need.
Shop Now 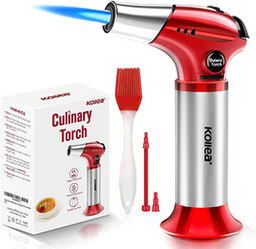 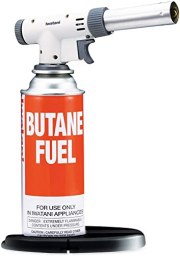 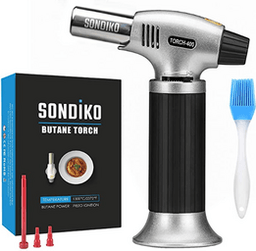 Top Pick
Sondiko
Butane Torch
Bottom Line
This bestselling refillable kitchen torch is safe to use no matter which angle you hold it.
Shop Now 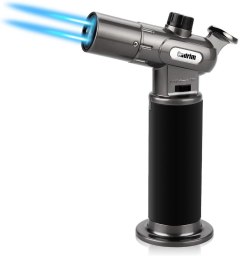 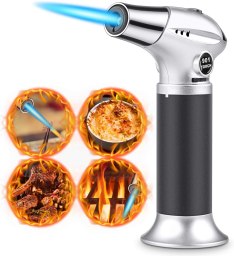